Veterans drive up to Stand Down 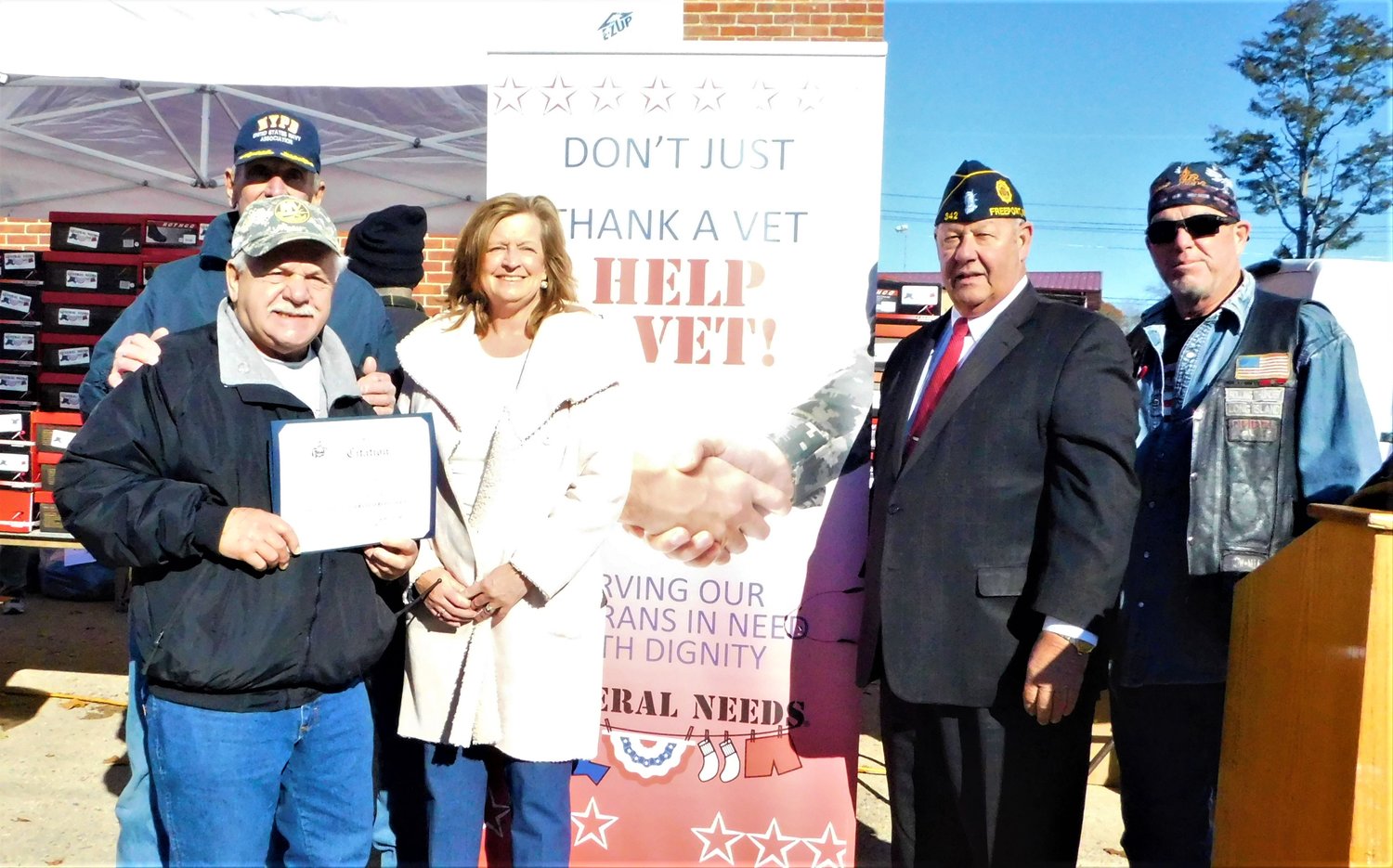 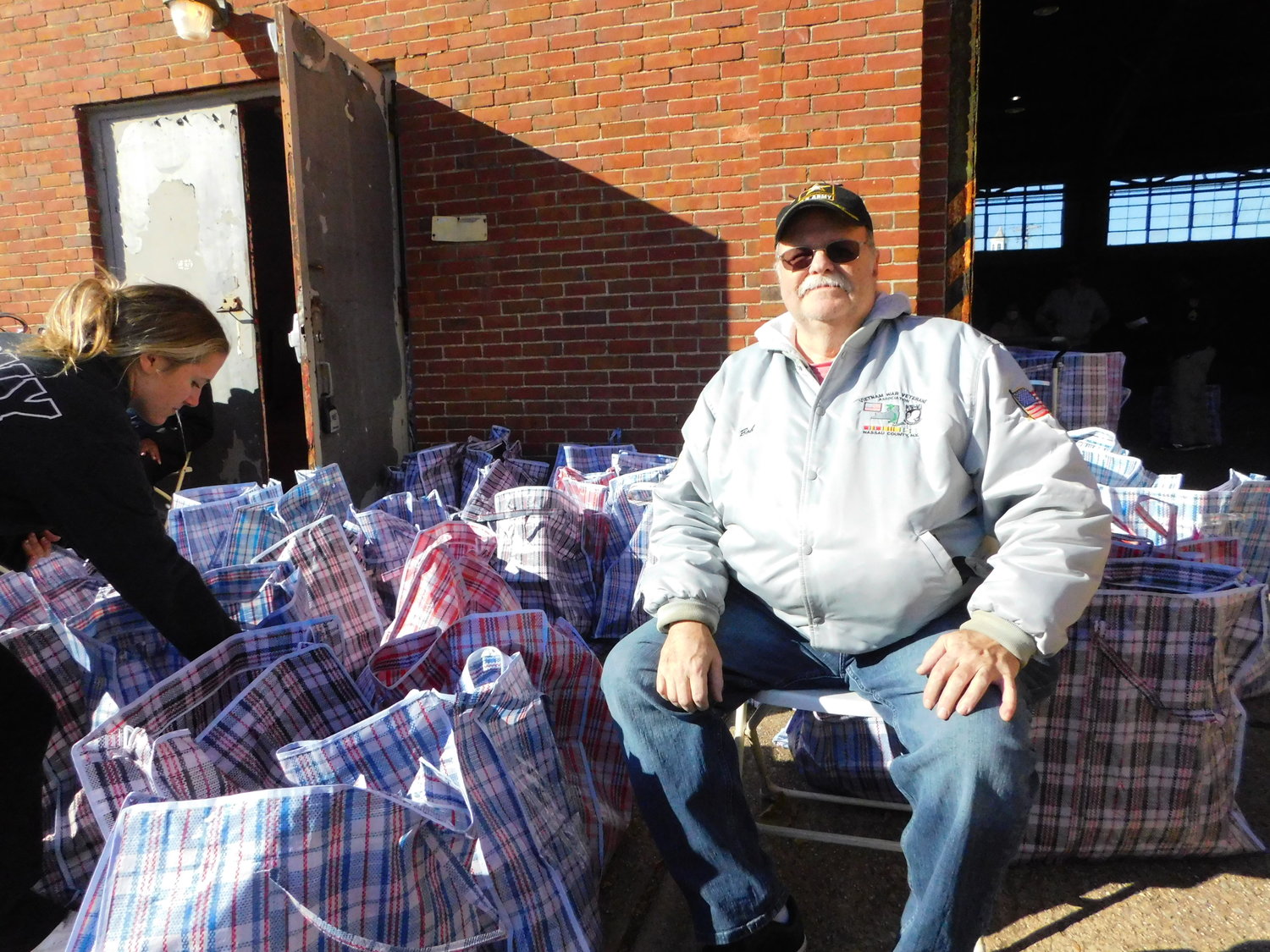 Bob Robertson of the Vietnam War Veterans Association of Nassau County helped organize the bags of personal need items and food that the association distributed at the Stand Down.
Reine Bethany/Herald 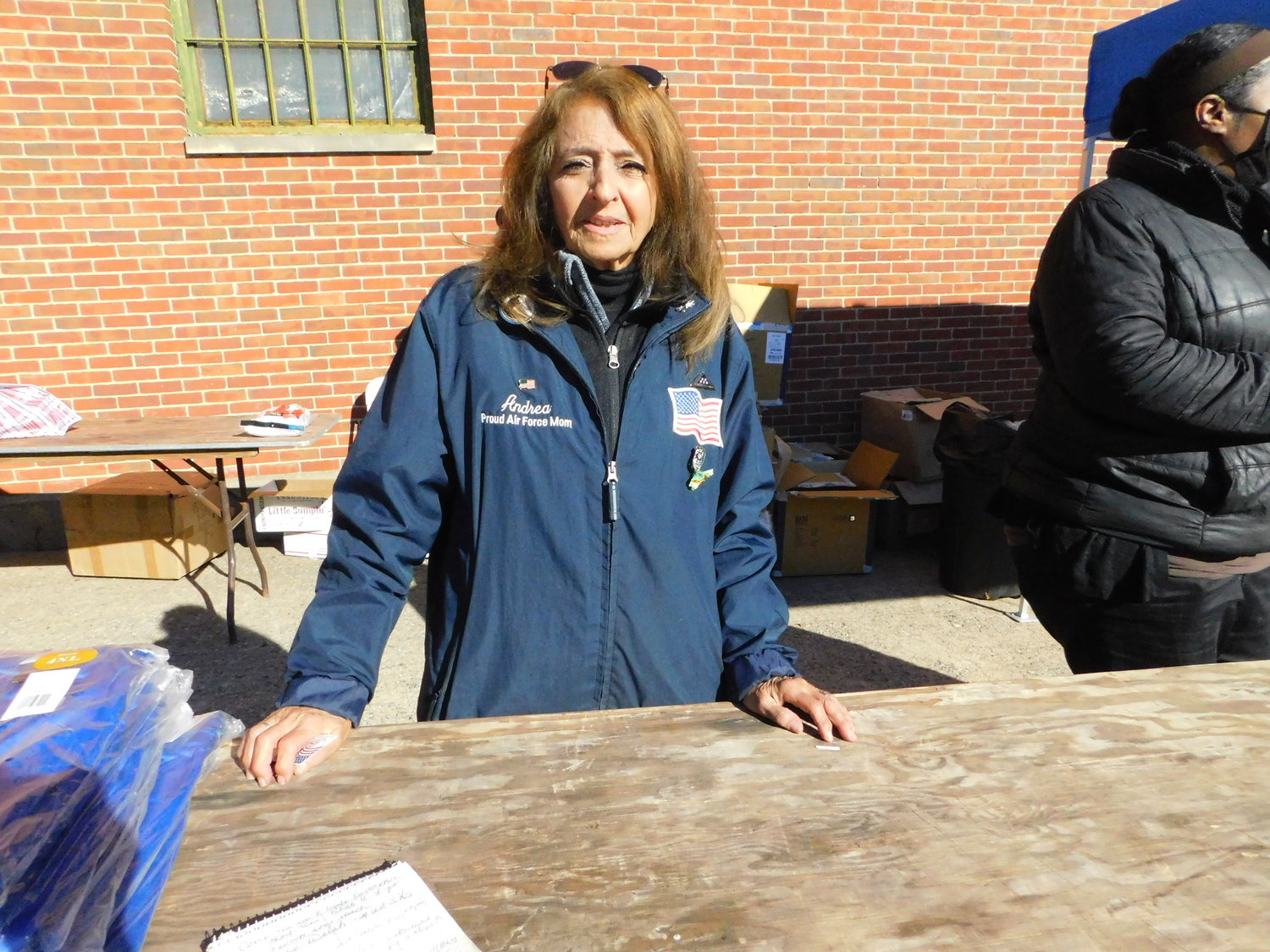 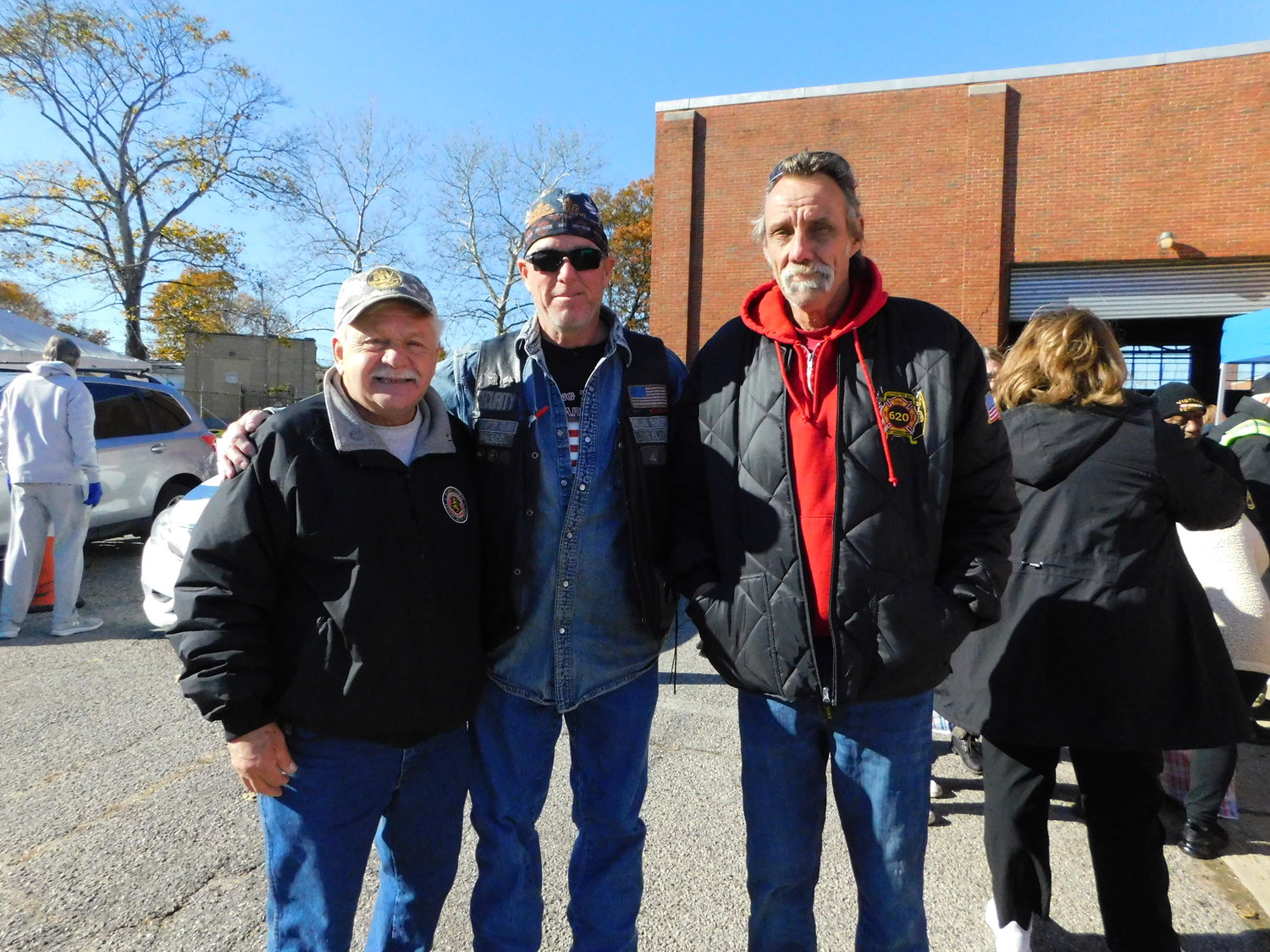 Hundreds of veterans attended the 35th Nassau County Veterans Winter Stand Down at the Freeport Armory on Nov. 23, where they received food, shoes, clothing and personal need items from a large team of veteran support organizations.

The progression of cars containing veterans at this drive-through event was accompanied by the music of the Statue of Liberty Band, a group of former military band musicians from Pennsylvania.

“It really is a testament to the men and women who serve our country in an increasingly dangerous world,” said Conor Kirwan, executive director of the Freeport Human Relations Commission.

Kirwan emceed the news conference at the event, while a double line of cars rolled past and volunteers rapidly handed bags of food and clothing into car windows.

“Supporting our fellow veterans and protecting this country,” Mayor Robert Kennedy said, “and providing you and I the right to vote, freedom of speech, liberty and justice for all, and freedom of religion, is what this is all about.”

“It’s phenomenal to be here today,” State Assemblywoman Judy Griffin said. “I really am so grateful to Mayor Kennedy, Ralph Esposito, County Executive Laura Curran and all these many organizations who come together to put this event on each year, and really give our veterans the support they need and deserve.”

Ralph Esposito, director of the Nassau County Veterans Service Agency, said, “I want to thank the mayor for making it possible for our veterans to have a place to come to receive some of the things that we hand out. It’s very hard, especially with this pandemic, for our veterans. … We leave no one behind.”

Two veterans who identified themselves only as Frank and Frank directed cars along their route. “You have to understand,” said one Frank, “if it wasn’t for veterans, you would not be here right now. You’d be talking Japanese or German.”

Andrea Nordquist, president of Military Blue Star Mothers of Nassau County, stood behind a table, handing out blue-and-white patterned shirts in response to shouts of “Small! Double X!” Blue Star is composed of “mothers, step-mothers, grandmothers, foster mothers and female legal guardians who have children serving in the military, guard or reserves, or children who are veterans,” according to its website. The organization offers many types of support to veterans.

“My son is just burying one of his friends today who committed suicide,” Nordquist said. “It’s an epidemic with veterans who have post-traumatic stress disorder or who are just coming back from active duty. So we’re erecting a sign in Albert F. Klestinec Park in Massapequa to raise awareness of the 22 vets a day that kill themselves.” Klestinec was the first soldier from Massapequa to die in the Vietnam War.

Suicide among veterans is of growing concern. Susan Schirmer of General Needs stood beside a sign that read “General Needs 1342 Mission. Boot project recognizing the 22 per day. From Maine to DC Nov.-Dec. 2021.”

“So we’re doing 1,342 boots from November to December,” Schirmer said, “to recognize the 22 per day that commit suicide.” November has 30 days and December has 31, which means that during these two months, 1,342 veterans nationwide will die by their own hands. “We’re giving boots to homeless shelters here today and our usual shelters that we visit monthly,” Schirmer said.

Ralph Esposito chatted with two colleagues, Bill Byrne and Chris Baktis. Byrne is president of Rolling Thunder Chapter 6, an advocacy group for prisoners of war and U.S. service members missing in action. He is also a veterans counselor with the county. Baktis is a member of Nassau County Firefighters-Operation Wounded Warrior, which is different from the national organization called the Wounded Warrior Project.

“You know,” said Esposito, speaking of joining the military, “you go in and sign a check, but you don’t know what the amount is. You come back whole, or you come back in pieces, or in a box maybe you come back. So we make sure the guys that did make it get what they deserve.”

Esposito puts in long hours at his job with the county. “We do housing, we do benefits for vets when they come home from war, all kinds of veterans, aid and attendance,” he said. “There’s nothing we don’t do. I even fix oil burners and deliver oil to people if they need it. Me and my deputy, Paul Vista, some of it comes out of our pocket. We don’t mind doing that because we know what it’s like. We were both in the service. He was in Afghanistan, I’m Vietnam, so I know what it’s like for these poor guys.”

The Veterans Stand Down operation is finishing its 18th year. Its distributions are held in July and November. The pandemic canceled this past July’s event.

Esposito rapidly named some of the participating organizations, which Mayor Kennedy had listed, but added, “Firefighters, they’re always here helping us. The [Nassau County] Office of Emergency Management, they work with us. The Freeport Police — there isn’t an organization that don’t do things for us. I just make it happen with their help. Without them, I’m nobody.”

Baktis explained Nassau County Firefighters-Operation Wounded Warrior. “We work on a 3 percent overhead,” Baktis said, “so 97 percent of what we bring in goes back to the veterans.”

Baktis and his wife travel to military posts like Fort Belvoir, Fort Bragg and Marine Corps Base Camp Lejeune, delivering donated items to veterans, including, he said, “iPads, laptops, shirts, socks, underwear, whatever they need,” even cooking utensils.

Esposito, whose husky voice is a result of surgery for throat cancer after he served for weeks as a volunteer firefighter at ground zero, is 77, but he doesn’t foresee quitting his work anytime soon.

“I gotta make all veterans welcome,” he said. “It comes from the heart. You don’t do this like a job. If you go by my pay, I make two dollars an hour … but I love it. You do what you gotta do and you make things happen.”