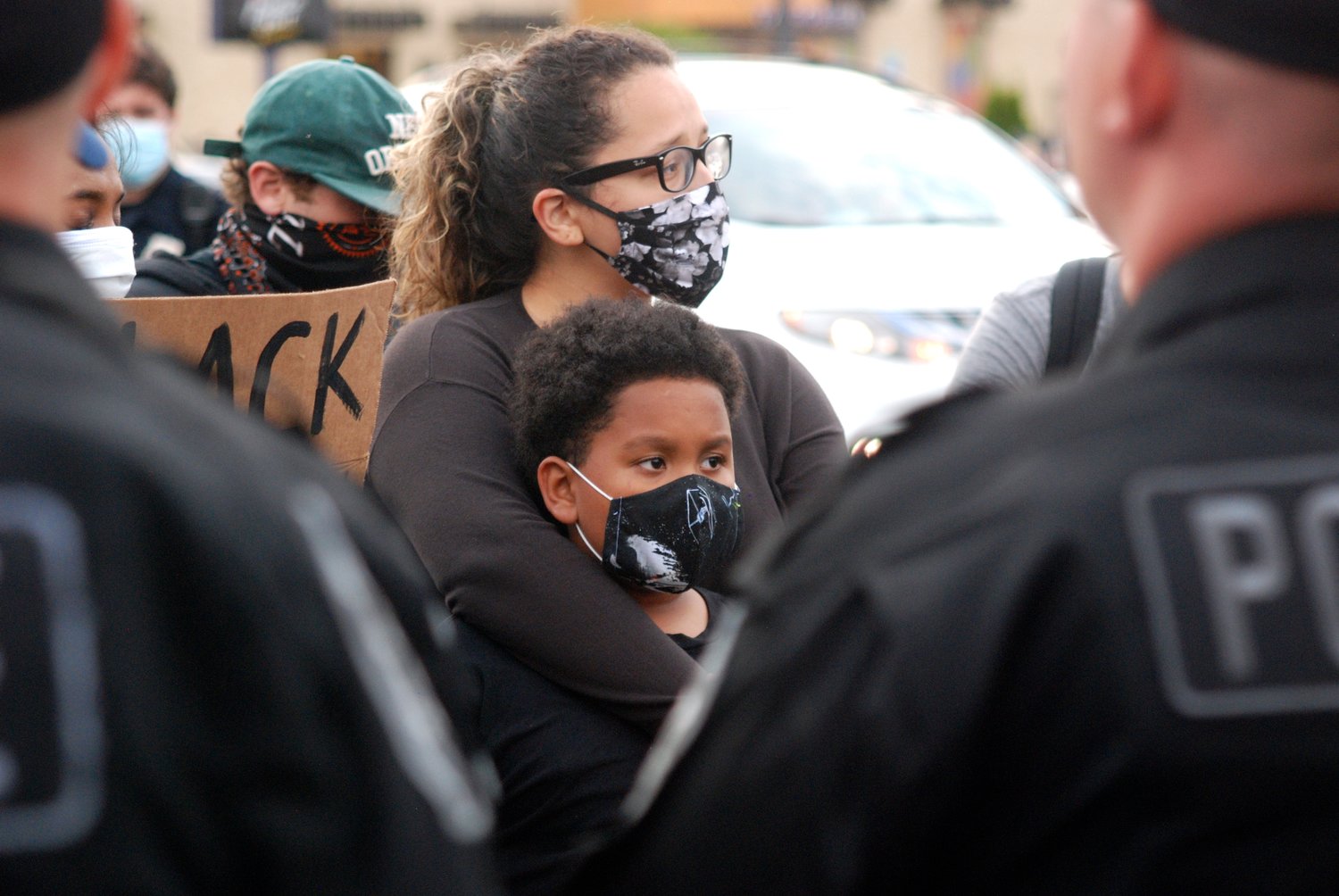 More than 150 protesters came to Merrick Road in Merrick on Tuesday to send a message that “black lives matter.” Among them were this mother and child.
Scott Brinton/Herald 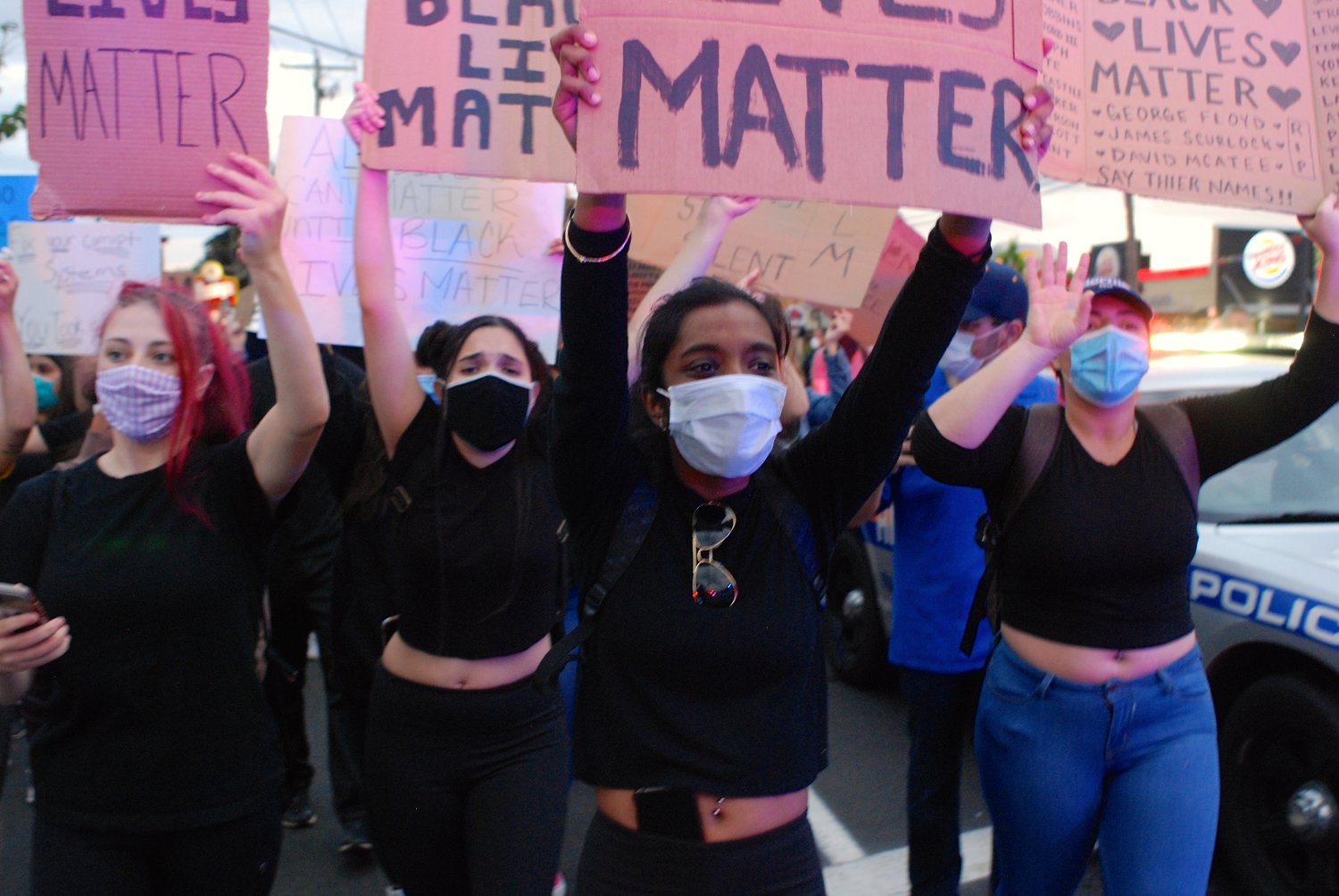 Protesters marched on Merrick Avenue in Merrick to speak out against the police brutality that led to the death of George Floyd in Minneapolis.
Scott Brinton/Herald 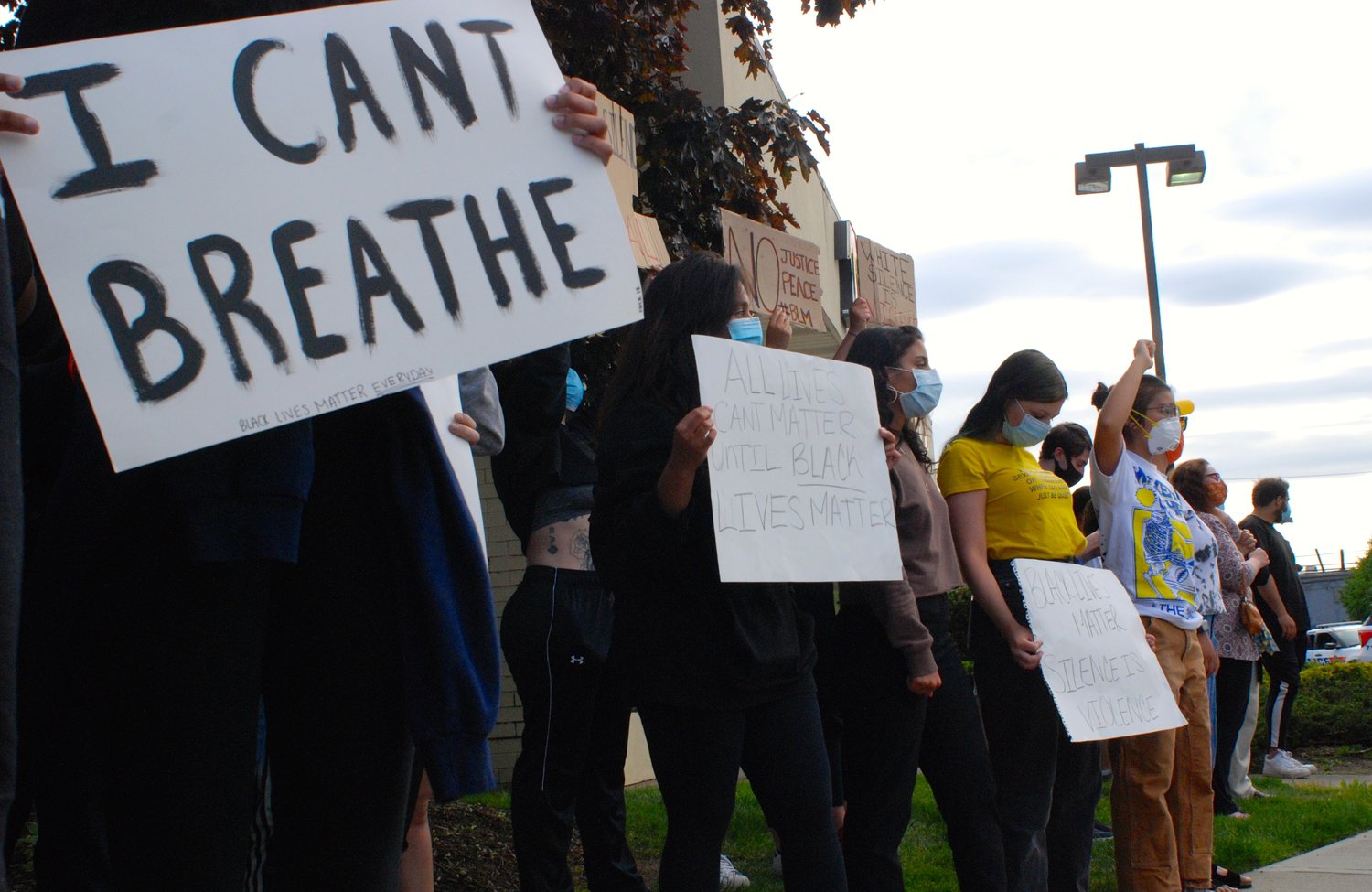 Many protesters wrote "I can't breathe" on their signs. George Floyd died after a Minneapolis police officer pressed his knee into his neck for more than eight minutes. Floyd had pleaded with the officer, telling him that he could not breathe.
Scott Brinton/Herald 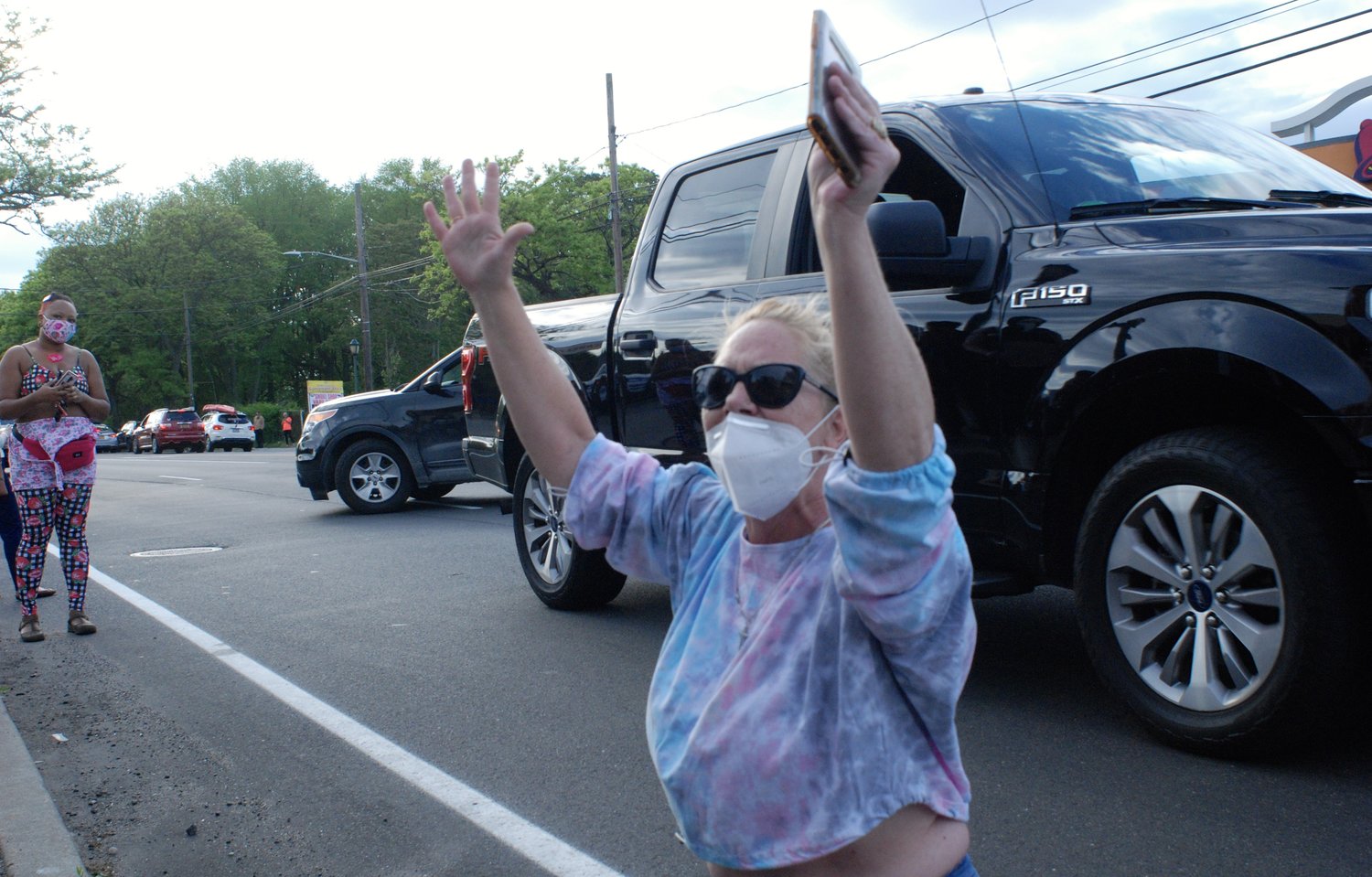 Michele Troombs, of Island Park, who said her nephew was killed by police, knelt down and prayed during the protest.
Scott Brinton/Herald 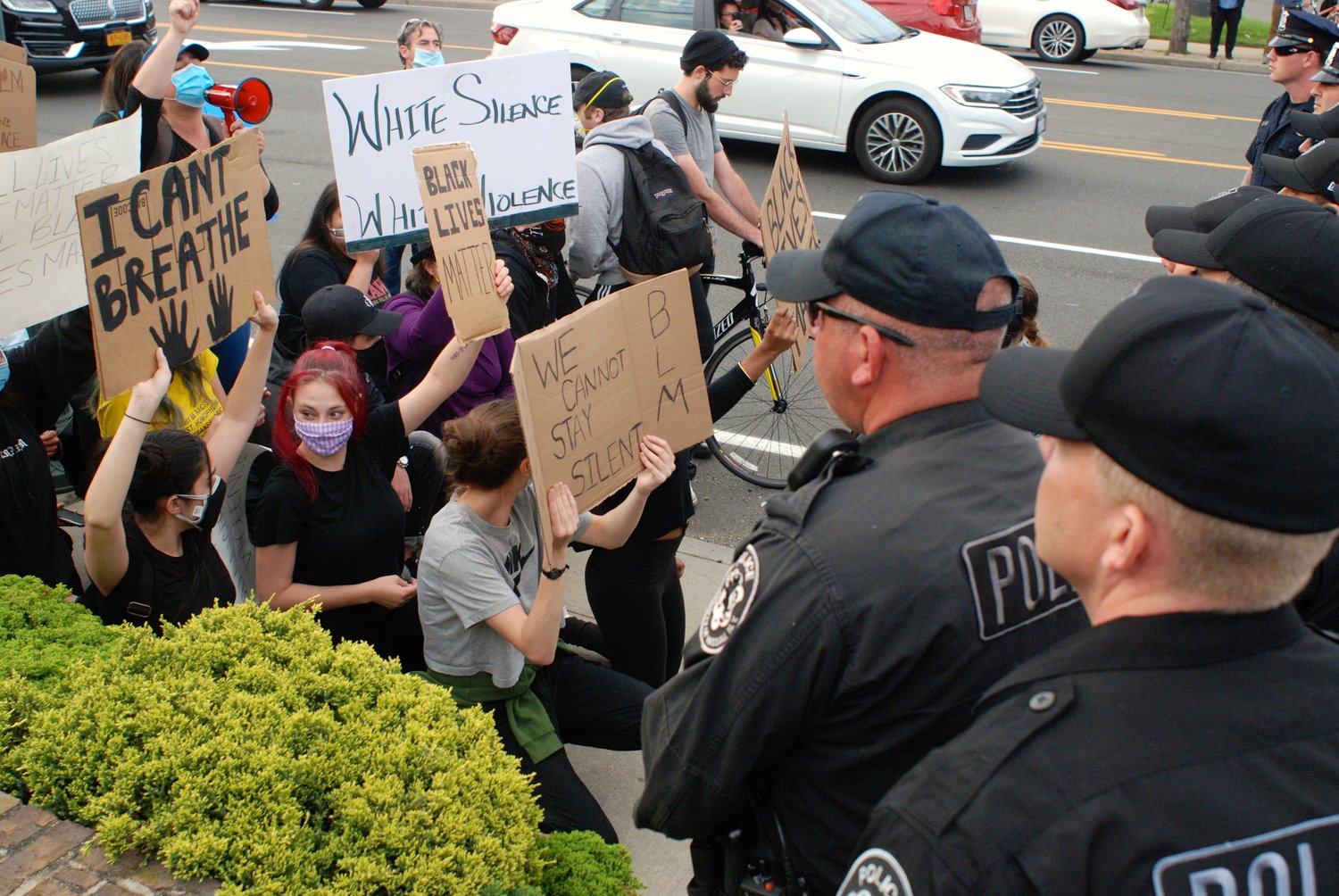 Police blocked protesters from moving on the sidewalk until enough officers arrived so they could be escorted on Merrick Road.
Scott Brinton/Herald 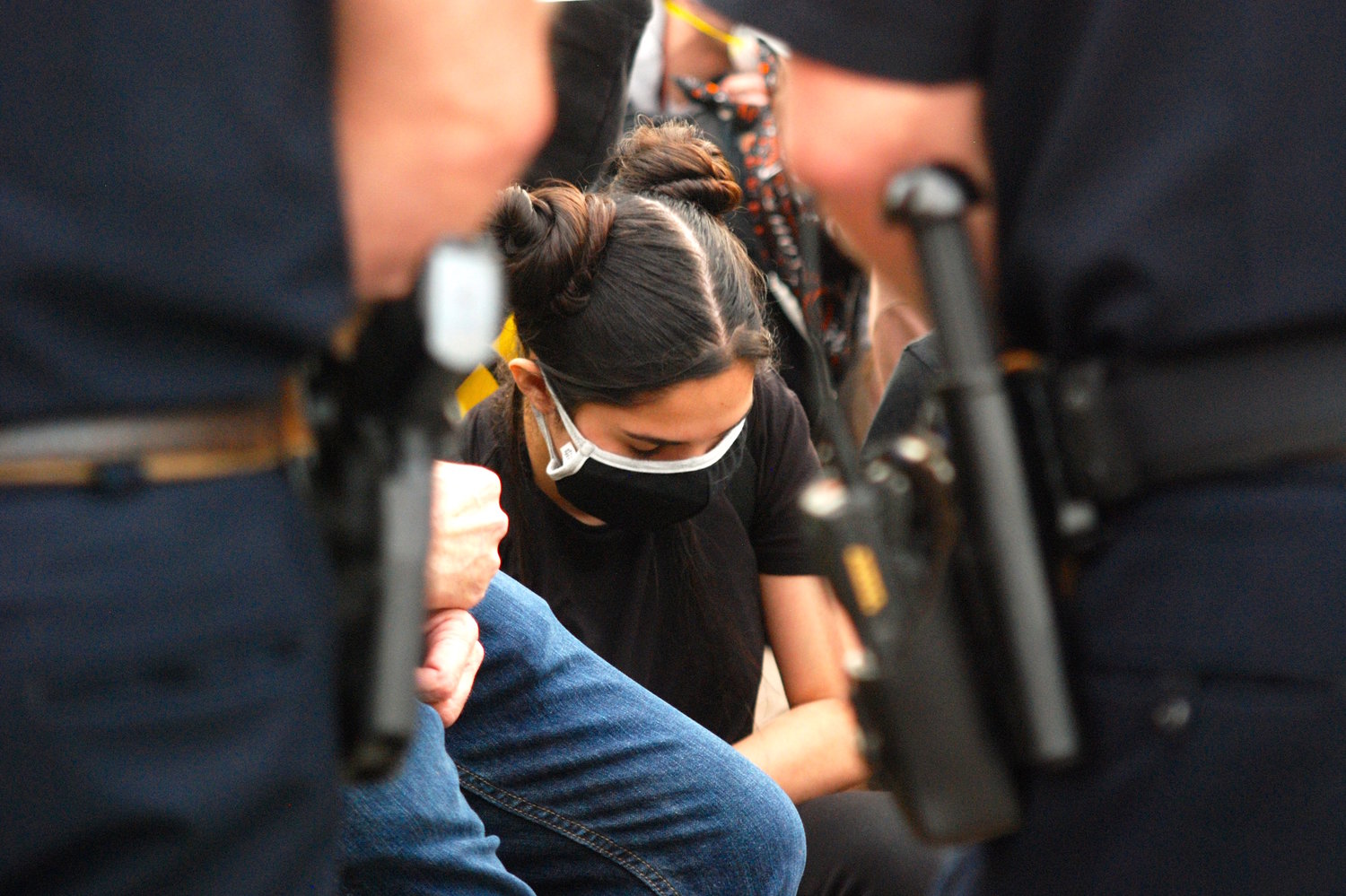 Clare Hunter, of Merrick, knelt down during a moment of silence for George Floyd.
Scott Brinton/Herald 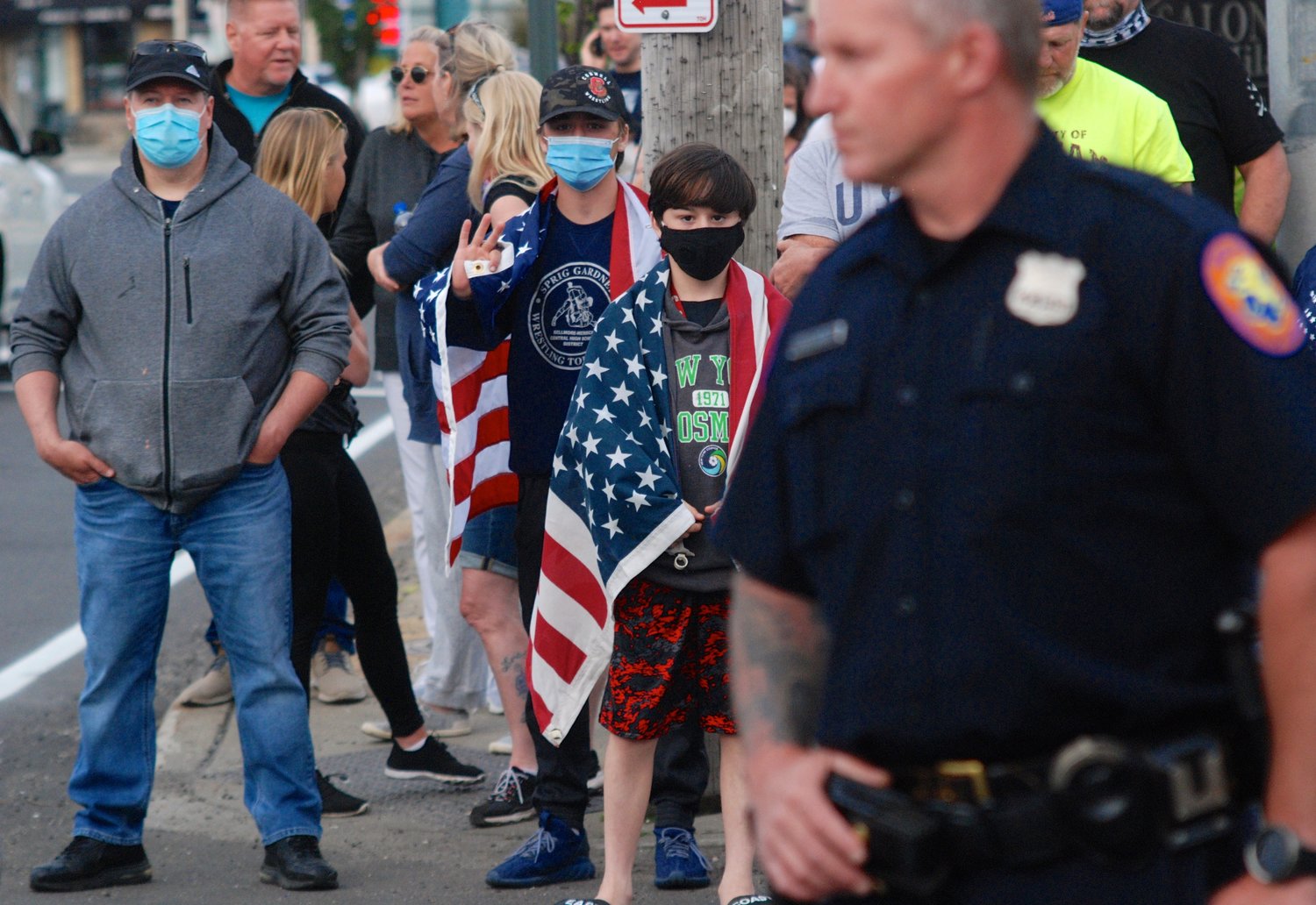 About 30 people stood on the sidewalk, shouting, "Tell them to go home." Young people, draped in American flags, were among them.
Scott Brinton/Herald 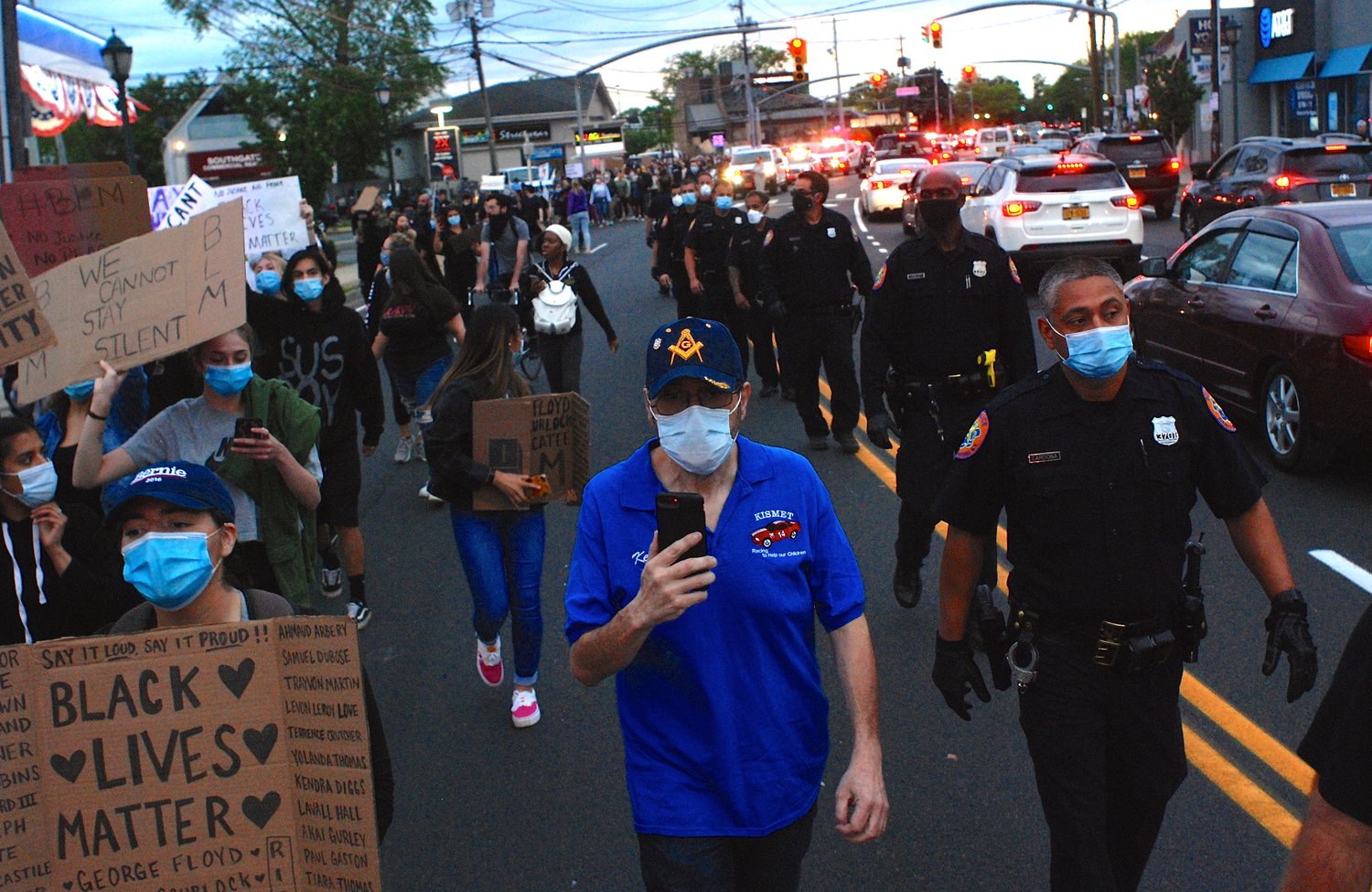 The protest shut down Merrick Road when demonstrators began to march.
Scott Brinton/Herald
Previous Next
By Scott Brinton

What started as a trickle of protesters lining up at 6 p.m. Tuesday in front of the Trader Joe’s on Merrick Road, in Merrick, quickly grew to a mass of more than 150, who prayed, chanted and shouted George Floyd’s name at passing cars, many of which honked back in response.
“Black lives matter! Black lives matter!” they repeated in unison, along with, “No justice, no peace!”
Then the demonstrators, brandishing cardboard signs, decided to move. That was when Nassau County police intervened to stop them, forming a wall of blue two rows deep across the sidewalk outside a Wendy’s to prevent them from moving.
The protesters pleaded with police to let them pass, but the officers would not move. Many protesters knelt on the pavement and implored police to join them. Still, the officers wouldn’t move.
The protesters, most of whom were young people, grew increasingly agitated, believing they were being prevented from exercising their right to free assembly. They were not, however. The police were waiting for more officers to arrive so they could form a human barrier to escort the protesters past a group of about 30 people who stood on the sidewalk roughly 150 feet away shouting, “Tell them to go home!” They also pointed north to the Long Island Rail Road station on Sunrise Highway and said protesters should head there.


Earlier in the day, a provocative social media post about the protest had stoked fear and concern among at least some nearby residents, according to local sources.
“The Black Lives Matter protesters were peaceful, nothing but peaceful,” said Clare Hunter, of Merrick, a Calhoun High School senior. “As someone who lives in Merrick, it’s disgusting to see people in our supposed family community be actively against an anti-racism protest.”
“It’s terrifying, or disappointing, that such a group of people in such close proximity would stand against a demonstration for basic human rights,” said Rebecca Sirof, also of Merrick, a junior at Calhoun.
Eventually, with dozens of police lined up to escort the protesters along Merrick Road, they continued to move, past the group of angry people shouting at them, to Babylon Turnpike, before circling back to where they started.
“Now that we came here to do what we did, spread the word,” Marian Lopez, of Baldwin, told the crowd. “All of you guys did a great job.”
The protesters then quietly dispersed, some escorted to their cars by police.