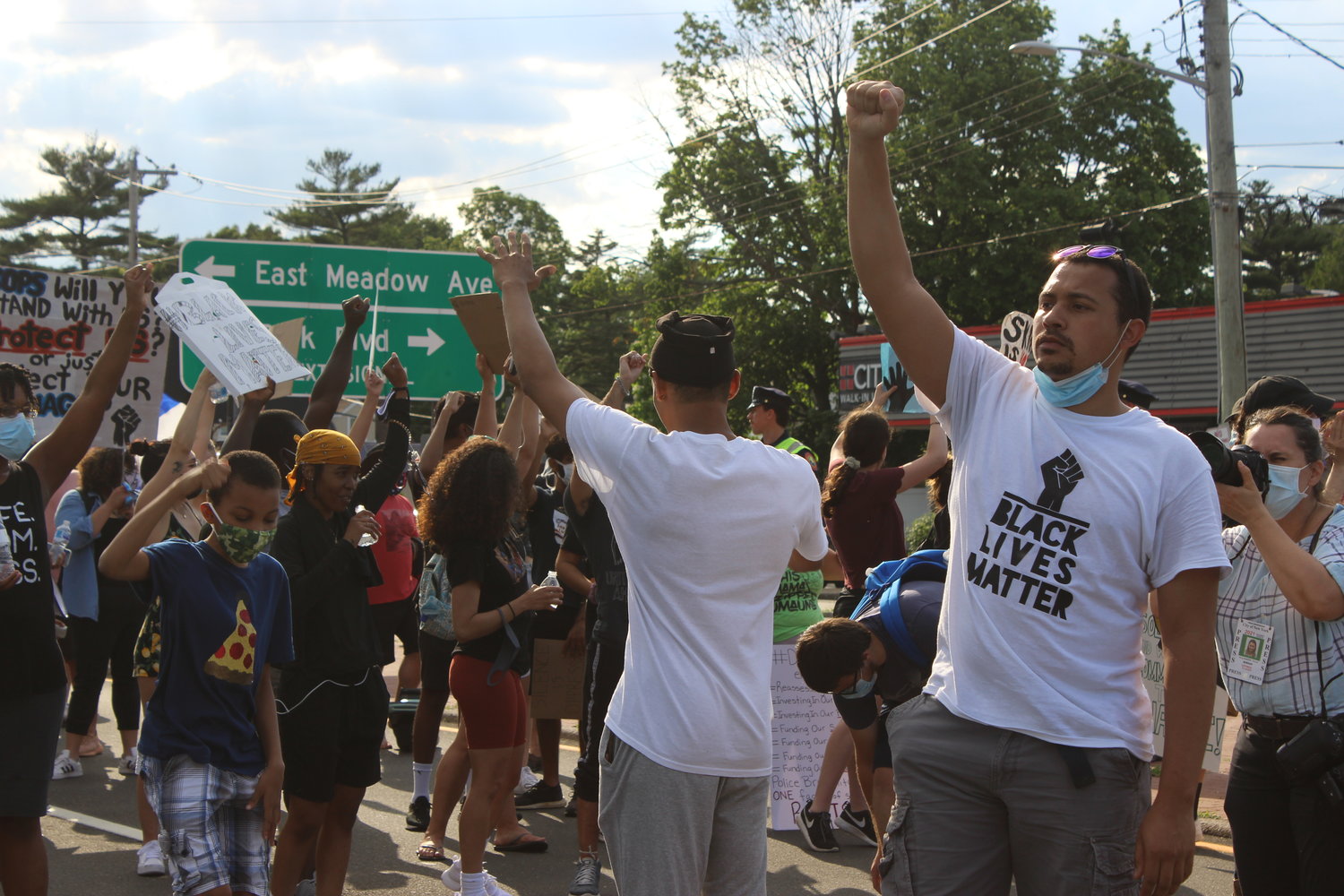 Protesters marched down Hempstead Turnpike in East Meadow on Friday before police officers were seen in a viral video throwing Terrel Tuosto to the ground and arresting him for disorderly conduct, according to police.
BRIAN STIEGLITZ/HERALD 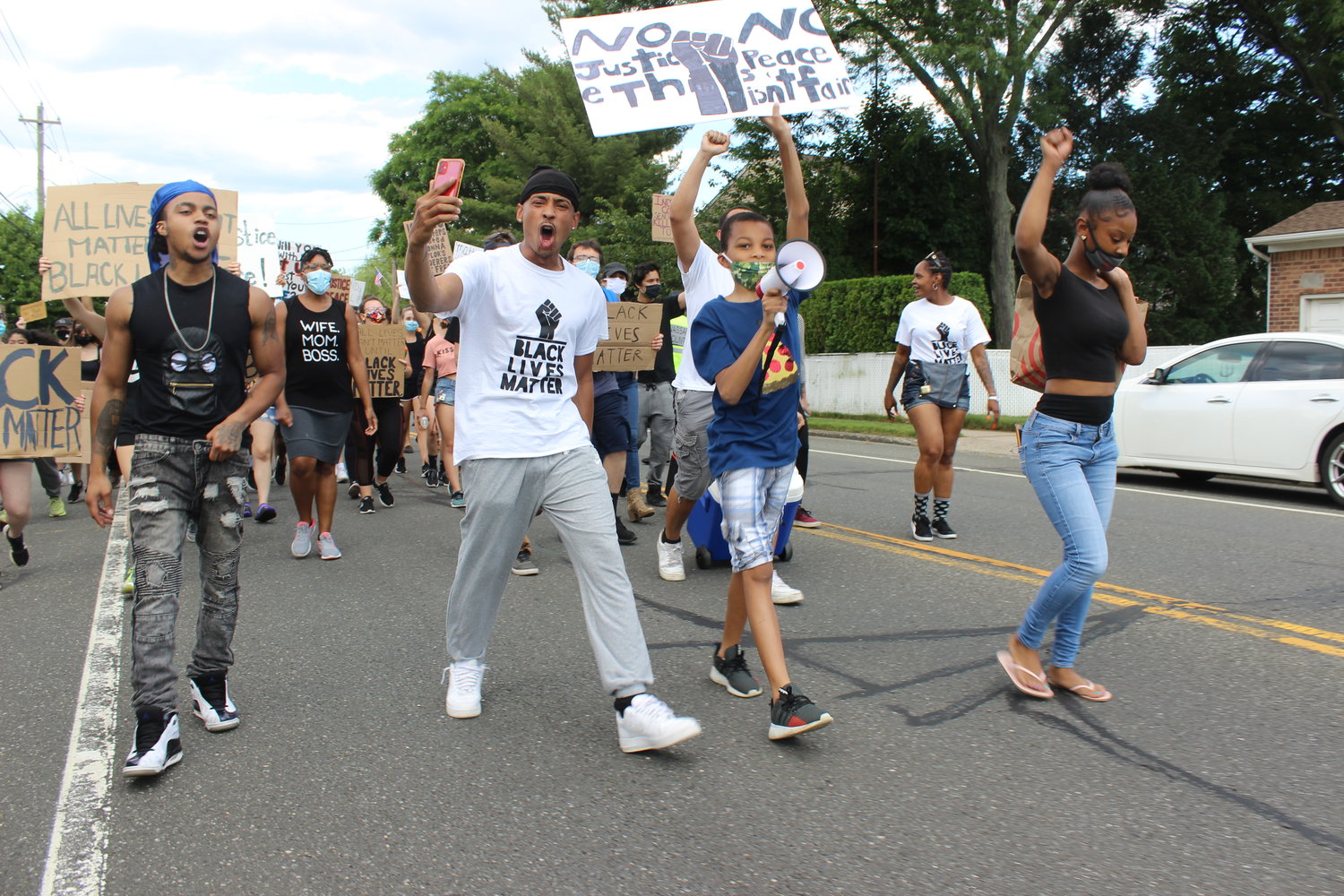 In the two hours leading to the arrests, Tuosto and his fellow co-organizers marched with hundreds of protesters from Front Street to Merrick Avenue and down Hempstead Turnpike.
BRIAN STIEGLITZ/HERALD 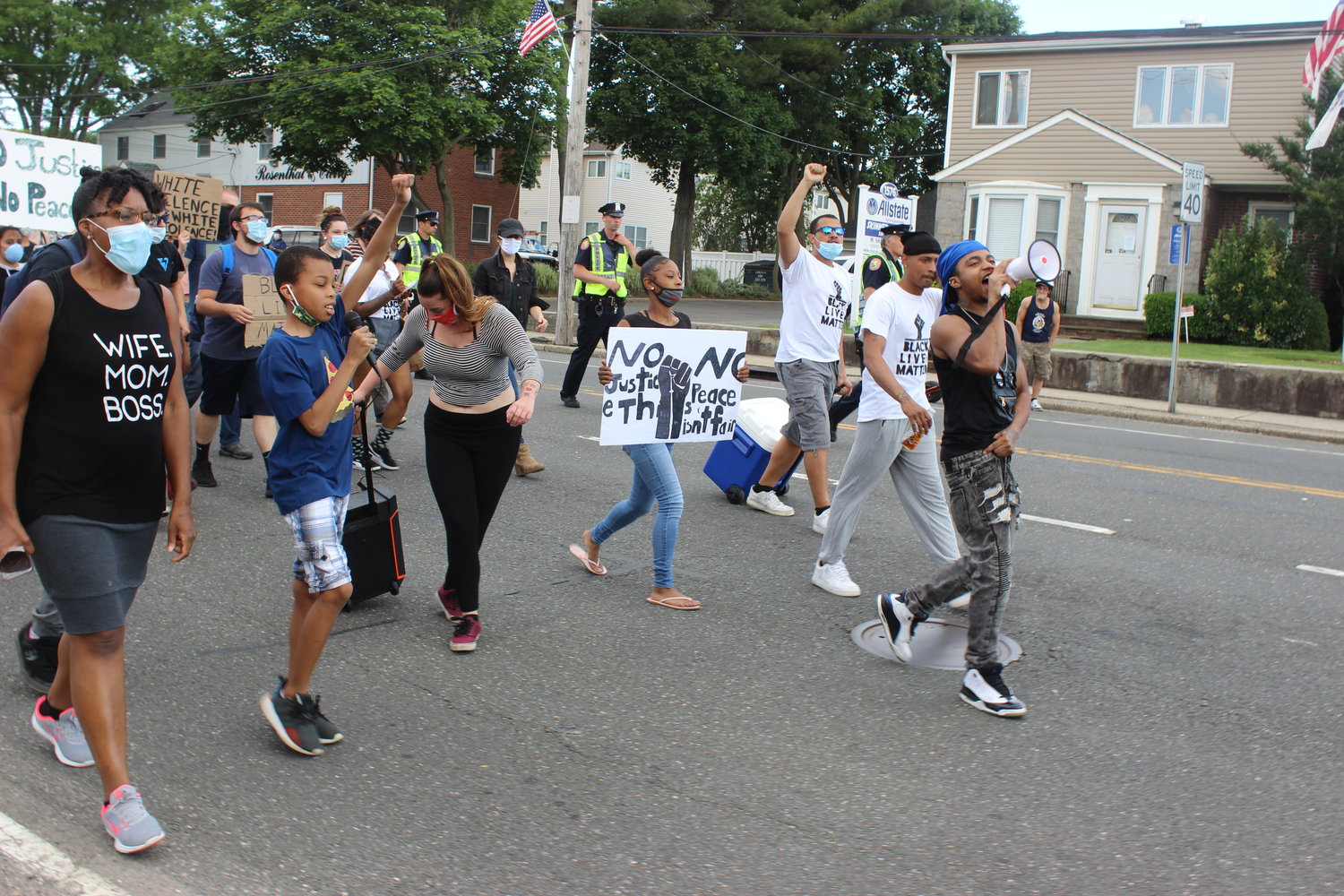 Protesters chanted "Mama! I can't breathe!," echoing the last words of George Floyd, who was killed in police custody after an officer knelt on his neck for eight minutes and 46 seconds.
BRIAN STIEGLITZ/HERALD 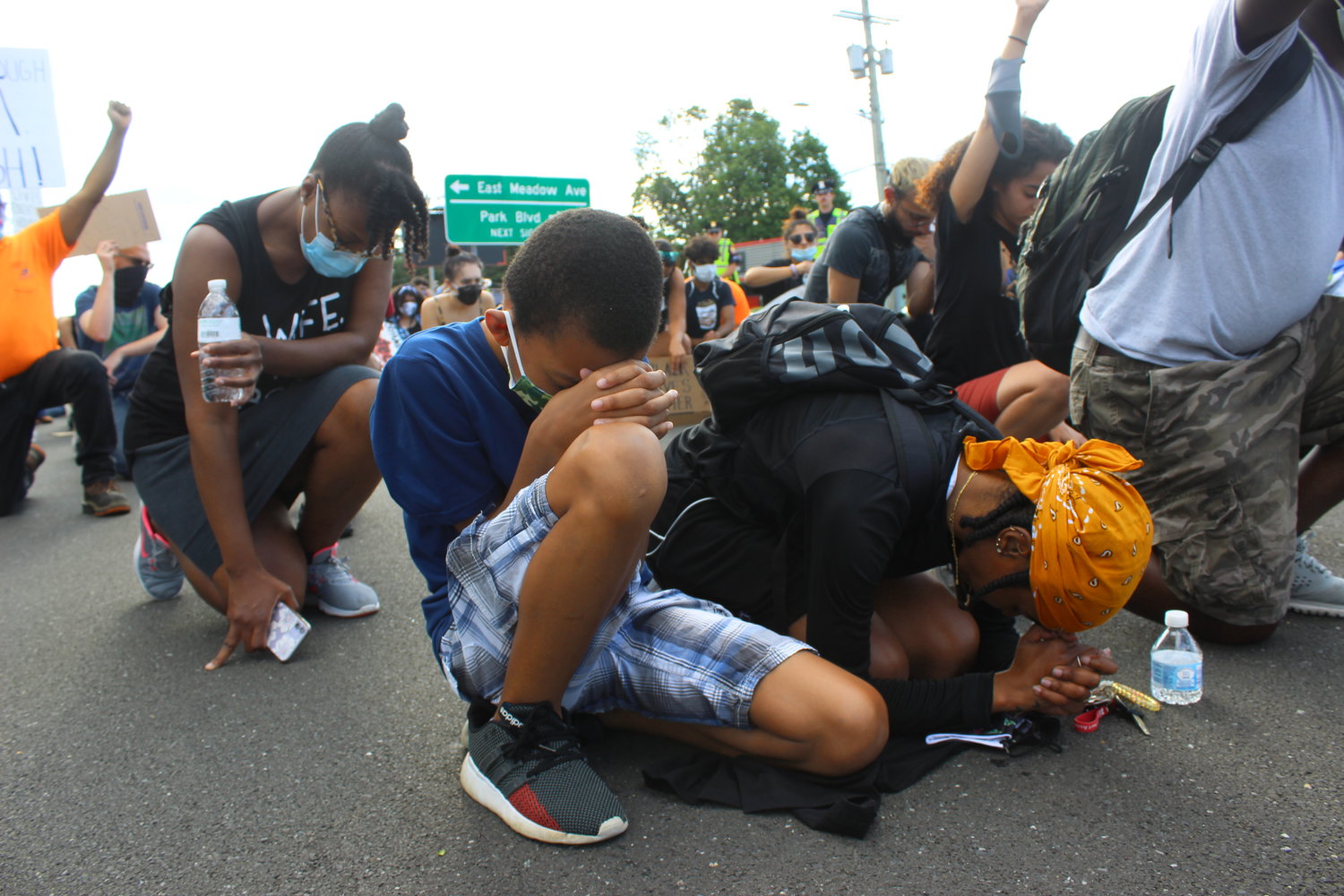 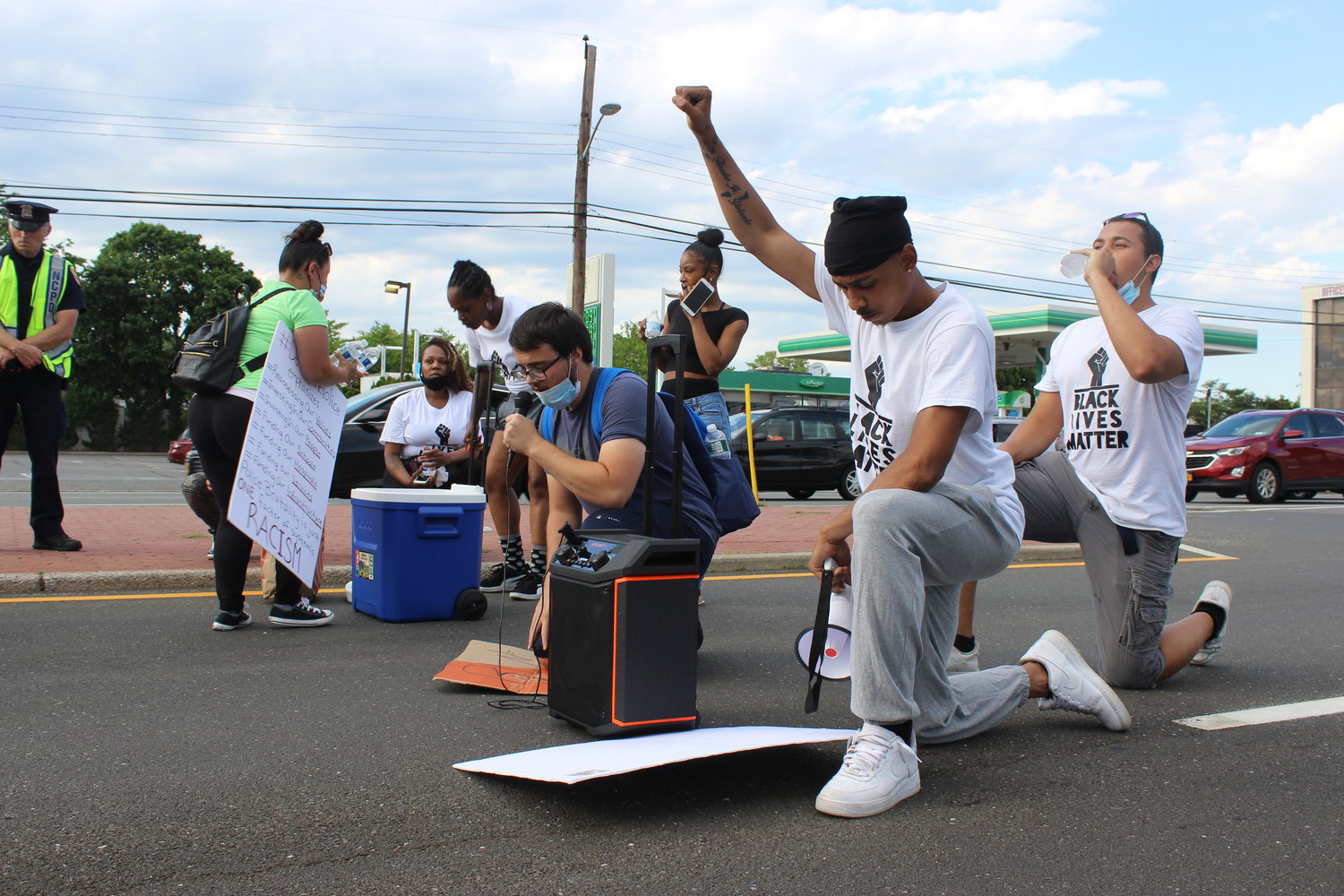 Motamedian prayed for peace with his fellow protesters.
BRIAN STIEGLITZ/HERALD 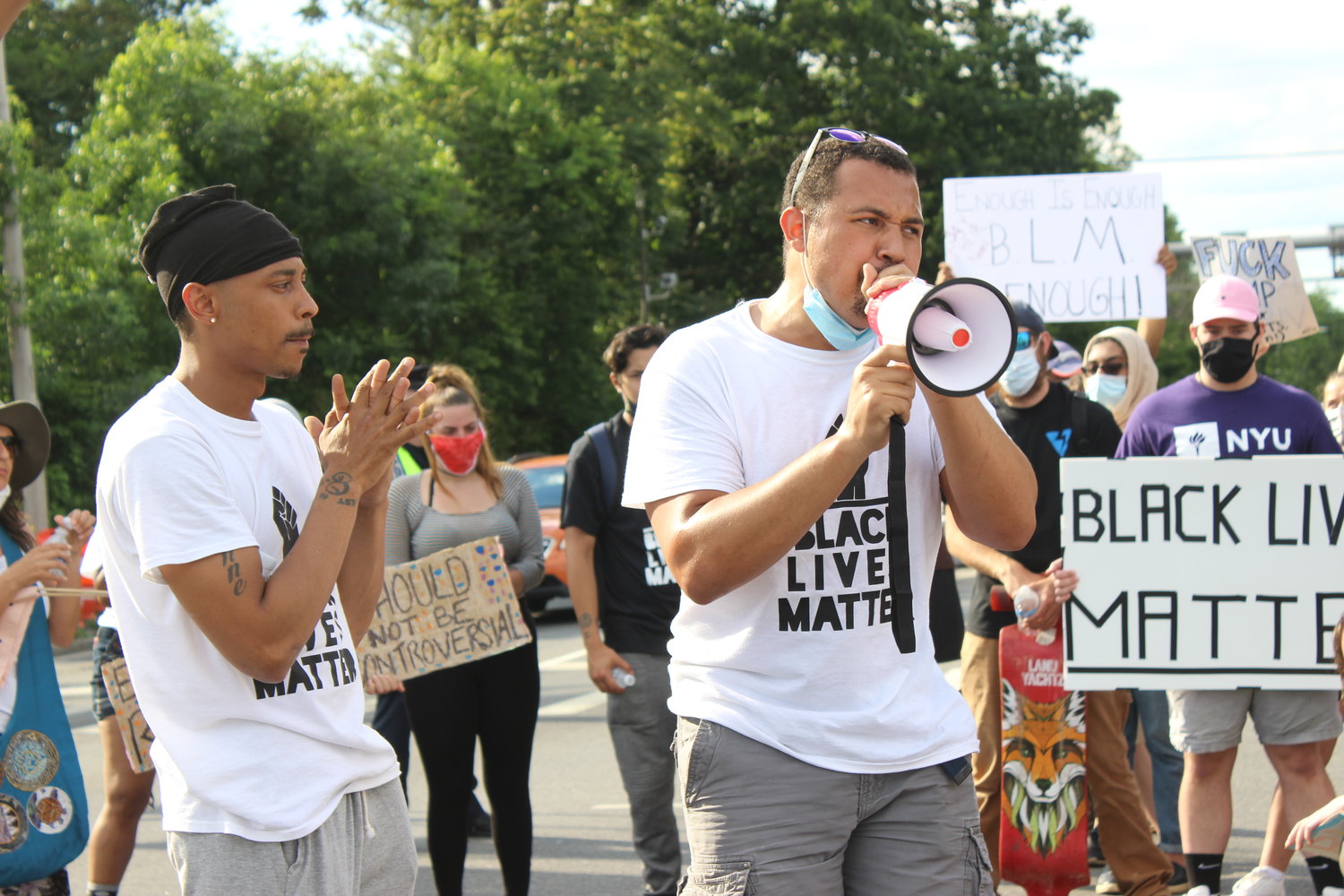 Terrel Tuosto, right, shared with the crowd his experiences with racial profiling and racism from law enforcement. He was with his brother Tiandre.
BRIAN STIEGLITZ/HERALD 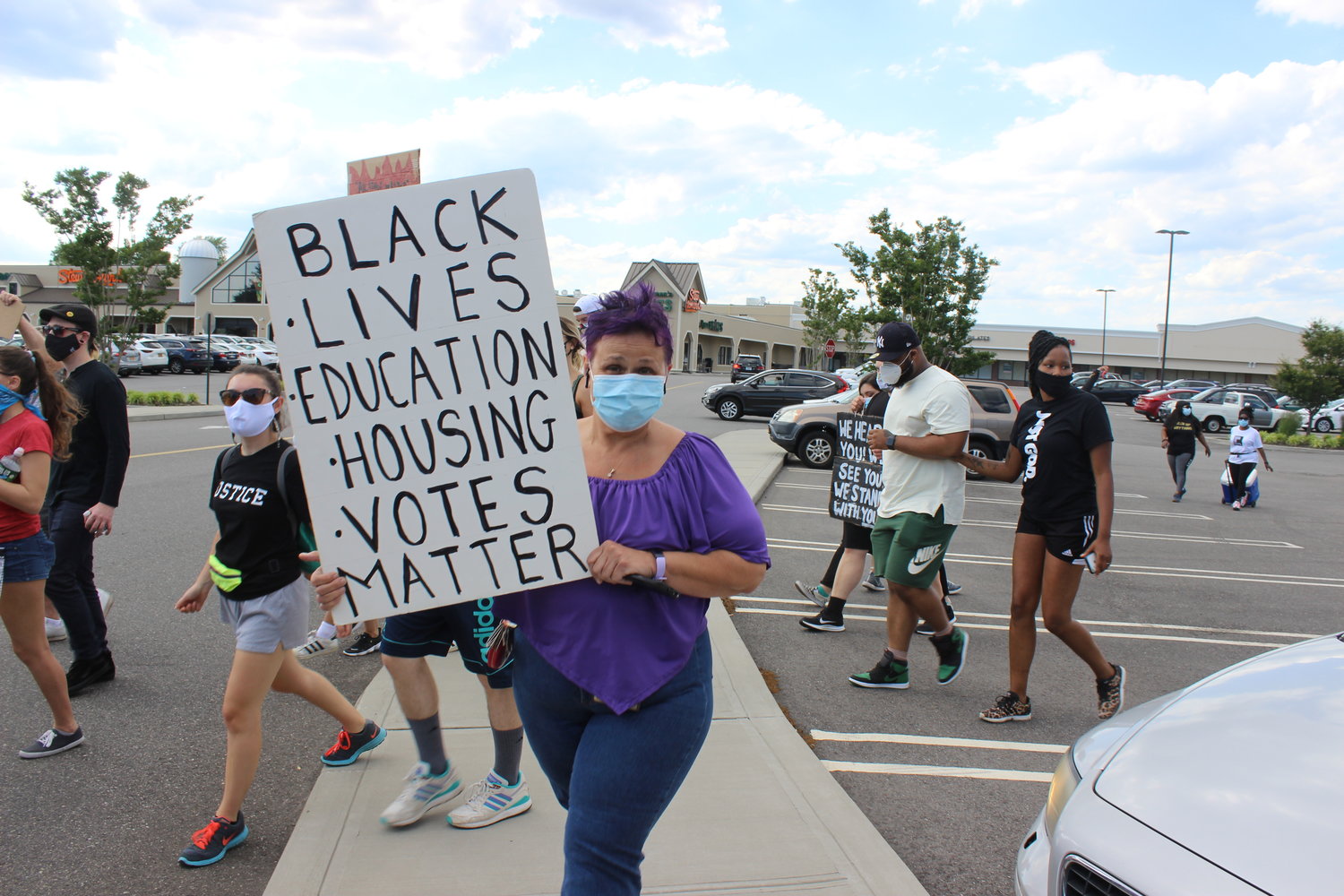 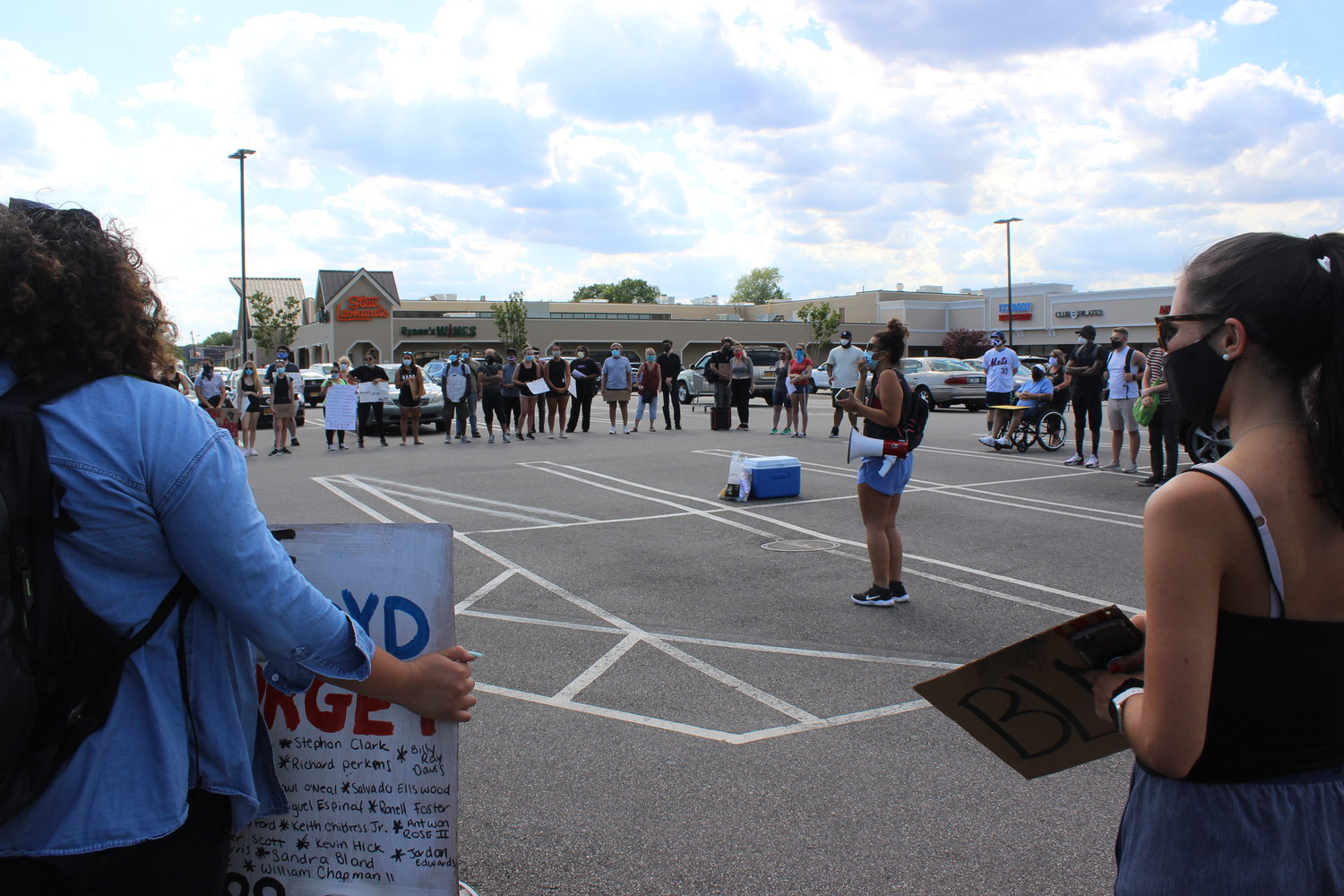 One of the organizers, a woman named Jamie from Merrick, addressed the crowd before the march.
BRIAN STIEGLITZ/HERALD
Previous Next
By Brian Stieglitz

A group of police officers threw an East Meadow protester to the ground last Friday before arresting him, as seen in a video taken at a Black Lives Matter protest. The man in the video, Terrel Tuosto, was one of the leaders of the protest, which began at the East Meadow Mall and made its way east on Hempstead Turnpike for roughly two hours.

Tuosto was walking with a crowd of protesters to his right and police officers to his left. When an officer stopped short, Tuosto bumped into him, and then police pulled him down and two officers pinned him to the pavement before handcuffing him. Tuosto’s brother, Tiandre, had been taken into custody the same way minutes earlier, and a third man was arrested shortly afterward. The third arrest was captured in another video, which also shows police throwing the man to the ground. The video of that arrest can be seen in a tweet shared by @MarisaKabas at https://bit.ly/3d6C7k2.

Video shows cops today at a peaceful protest in East Meadow, NY (Long Island) violently arresting a man. According to bystanders “they kneeled on his neck and had about 6 officers holding him down.”https://t.co/XDJYPhg2BZ pic.twitter.com/5PJQWMZgiA

All three men were charged with disorderly conduct, for allegedly obstructing traffic.

On Monday, Detective Lt. Richard LeBrun of the Nassau County Police Department said that the NCPD’s Department of Internal Affairs had launched an investigation into the arrests, despite the fact that there was no formal complaint about them. Police repeatedly told the protesters not to walk in traffic, and, according to LeBrun, the warnings were ignored. “The Police Department values each demonstrator’s peaceful right to free speech,” he said in a statement, “however, the safety of all is paramount.”

In the two hours before the arrests, Tuosto and other organizers marched with hundreds of protesters north on Front Street to Merrick Avenue, and then east on Hempstead Turnpike.

One of the main chants from the demonstrators was, “Mama! I can’t breathe!” echoing the last words of George Floyd, who was killed in police custody in Minneapolis on Memorial Day, when a officer knelt on his neck for nearly nine minutes.

Tuosto and his co-organizers periodically halted the march and handed a bullhorn to whoever wanted to speak. At one point, Michael Motamedian, of East Meadow, let a group prayer.

One protester who spoke to the crowd was a 9-year-old boy named Channing. “How come Martin Luther King Jr. spent his life for people to be equal, and to this day, in 2020, nothing’s changed?” Channing said. “. . . This is a part of history, so we have to make it the best it can be.”

Later, Tiandre Tuosto addressed the crowd, and noted the number of police officers who were on patrol. “Look behind you. Look in front of you,” Tiandre said. “Those are all police officers. But they’re not here for a bad cause. They’re here for a good cause.”

Roughly 20 minutes later, police arrested Tuosto, before taking his brother and the third protester into custody as well.

Tensions initially arose when the leaders halted the march at the intersection of Merrick Avenue and Hempstead Turnpike. According to county Police Commissioner Patrick Ryder, the demonstrators stopped traffic, and tried to move the protest to a section of Hempstead Turnpike not originally blocked off by police.

Ryder and County Executive Laura Curran defended the officers’ actions in a joint statement that echoed Lebrun’s. It read, “It became necessary” to make the arrests for “the demonstrators’ safety.”

“Police repeatedly made attempts to keep protesters off moving lanes of traffic,” the statement continued. “This safety precaution was met with strong opposition and resistance, which resulted in the arrests of these subjects.”

Curran and Ryder’s statement complimented the way police responded to more than 75 protests across Nassau County. Police have and will continue to support peaceful protests, it read, but demonstrations must remain “safe and orderly.”