Volunteers from the North Shore, including Locust Valley, help the hungry during Covid-19 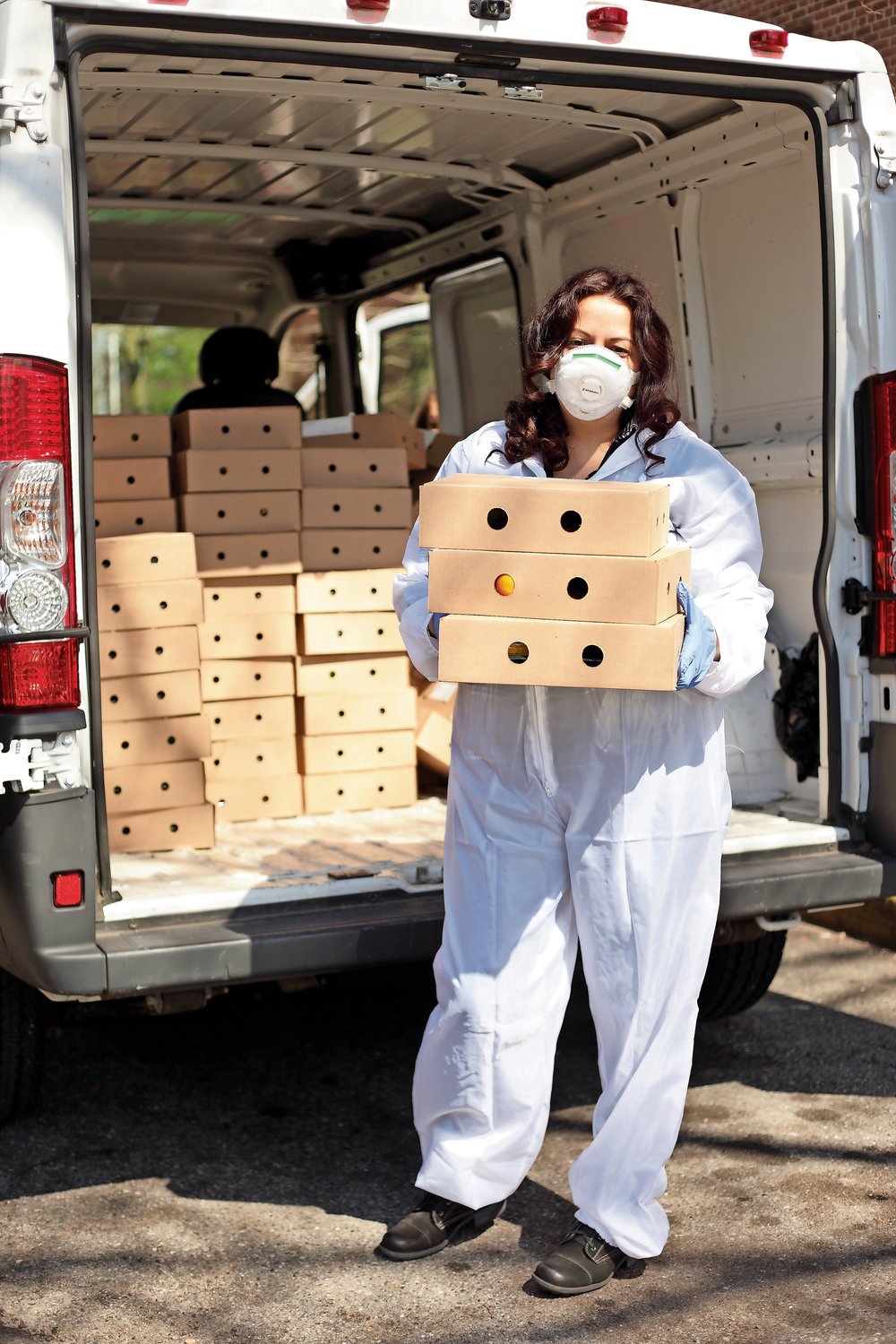 Aura Wagner is working hard to help the hungry on the North Shore.
Courtesy Tammy Lanham

Covid-19 is big, and we knew we couldn't fix it, but Mother Theresa said, 'We can do small things with great love.'”
Courtney Callahan, Locust Valley
By Laura Lane

Hunger, a byproduct of the coronavirus pandemic, has changed Aura and Barry Wagner's lives dramatically. The Glen Cove couple began preparing for a food drive three weeks ago, planning to do it by themselves. The Wagners would pick up food donations outside people's homes for the pantry at their church, the Glen Cove Christian Church.

They researched the protocols for safe deliveries on the websites of the Centers for Disease Control and Prevention, the Federal Drug Administration and the New York State Department of Health. They learned mostly that it was important to protect their hands, eyes and mouth.

"We're so suited up, we look like we work in a lab or are trick-or-treating," said Aura, 42. "I call it my marshmallow suit. People laugh when they see us, which is a reward for us."

Days after they began their work, the need for food increased exponentially. People were thrown out of work by the closure of non-essential businesses, and many were ineligible for unemployment benefits because they are independent contractors and freelancers — nannies, house cleaners, artists and other "gig" workers.

The number of people who were hungry skyrocketed. "The need for food began to grow like the virus," said Barry, 62. "Most people that we heard of at that point were landscapers and restaurant workers. They're out of work and have to feed their kids."

Realizing that the need was more than they could handle, the couple contacted an organization in Locust Valley called NOSH.

When the need for food became evident, Courtney Callahan, of Locust Valley, contacted a group of people whom she had been volunteering with to assist the vulnerable population on the North Shore with St. John's County Fair Grants, funds given to area senior centers and Glen Cove Hospital's Family Medicine Department, among other places. Callahan, the director of outreach at St. John's of Lattingtown, an Episcopal church, said the volunteers had become friends.

"When the coronavirus hit, we knew we needed to do something," Callahan said. "Covid-19 is big, and we knew we couldn't fix it, but Mother Theresa said, 'We can do small things with great love.'"

Three weeks ago, the group created NOSH — for North Shore — to provide emergency meals for the hungry on the North Shore during the pandemic and its aftermath. Fifty-four volunteers work from their homes in different capacities. Some are part of a "map mobilization" group, which coordinates contactless food deliveries, while others, in the "restaurant recovery" group, devise creative ways to support local eateries. Only a few people, including the Wagners, actually drop off the food. NOSH helps people in Bayville, Glen Cove, Glen Head, Locust Valley, Sea Cliff and Lattingtown.

"We bring NOSH bags, emergency food people can cook that includes canned tuna or chicken, a box of pasta, vegetable and a second dinner of turkey or a small beef and fresh vegetables," Callahan explained, adding that the Island Harvest food bank has helped supply the food. "We also have a GoFundMe campaign so people can buy a bag."

NOSH delivers food to the hungry every other day. "Barry and Aura are magical people," Callahan said. "They have problem-solved everything. They're courageous, and understand that the Covid-19 pandemic world we're all living in now is vastly different than before it happened."

"I start my day with coffee, home-schooling my son Ben, and then Courtney calls and we pick up food," Aura said. "As crazy as the days are, I ask God to give me the strength to do things I need to do. You can get paralyzed when you listen to the news."

NOSH does not have its own pantry. Food is stored at Locust Valley's Grenville Baker Boys & Girls Club, and recently at Sport & Classic Car Club as well.

Sophia Kang, from Roslyn Harbor, is helping too. The owner of Sea Cliff's La Maison Sophia, she owns part of the space in Wagner's building. They have opened a pantry there to store donated food. "We will be sorting and storing food here that we will later deliver," said Wagner, adding that everything would be sanitized.

They are now storing meals donated by Island Harvest, Meals on Wheels and the North Shore Soup Kitchen. And Wagner has received lists of residents in need of food from Glen Cove Mayor Tim Tenke, the city's school district and from Peggy Cuomo, the director of the Sea Cliff volunteer organization, Mutual Concerns, which provided lunches to the village's elderly before the coronavirus.

"Mayor Tenke sent a postcard out to every home in Glen Cove, asking if they need aid or if they want to volunteer," Wagner said. "I have a feeling we will find that more people need food."

Callahan said she was in awe of all of the volunteers, which include members of the Glen Cove Kiwanis Club and residents of Sea Cliff. "This is such a group effort," she said. "This is only happening because of people who have had decades of service to this community. Every person brings something essential to the table."

Those interested in getting involved can find NOSH North Shore on Facebook or call (516) 366-0277. To donate, go to GoFundMe at gf.me/u/xsvsik and sponsor a NOSHBag.