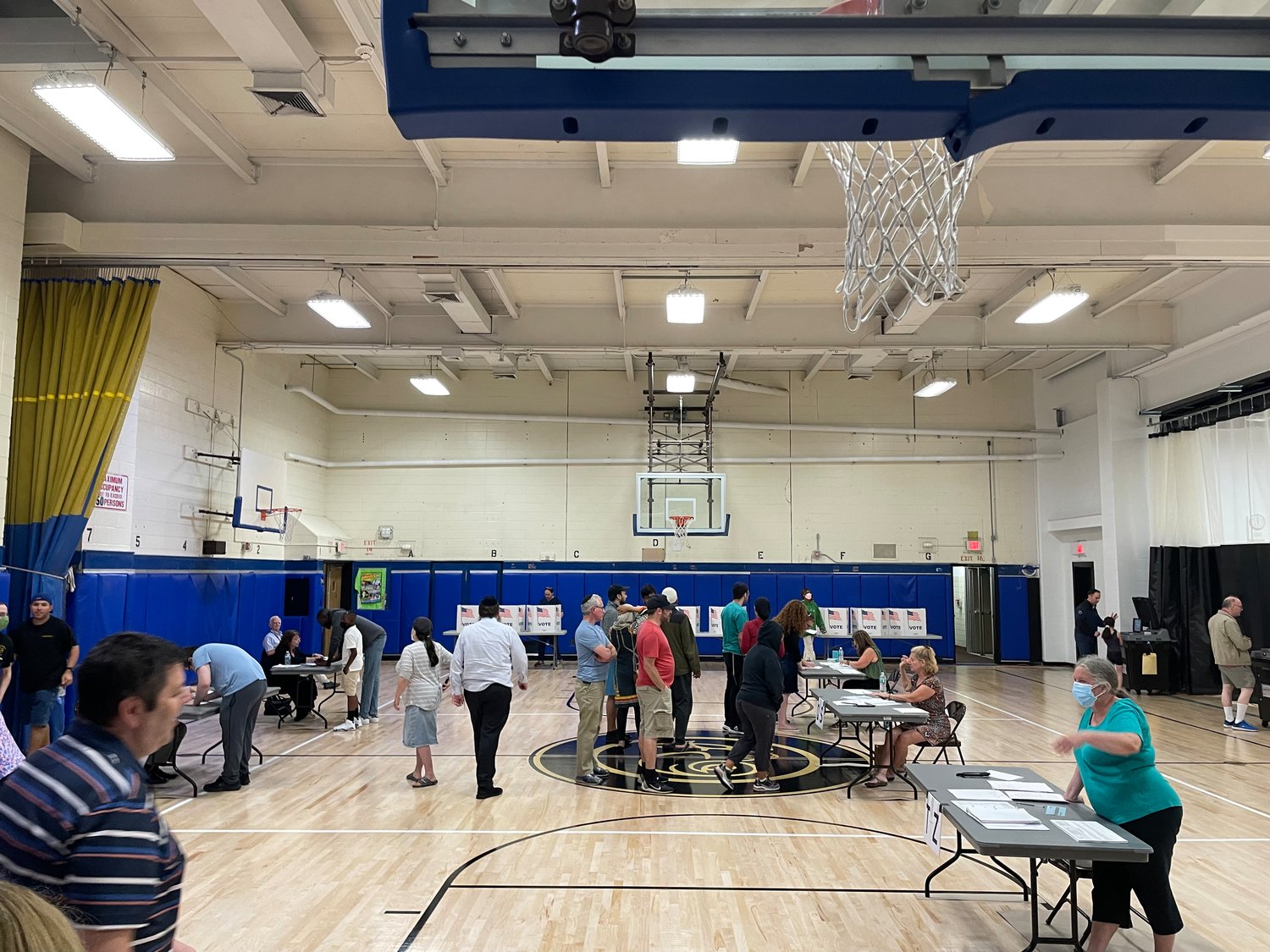 The last few voters filtered to the polls on the evening of June 21.
Kyle Chin/Herald
By Kyle Chin

West Hempstead voters passed the proposed $71.1 million school budget — in a second bid by the school board seeking voter approval — by a slim 174-vote margin June 21. The board’s first proposal was rejected May 17, the only school district spending plan on Long Island to be voted down.

The district’s cap on its tax levy increase was 2.14 percent, which it mirrored in its original budget proposal. In the revised spending plan, the increase was reduced to 1.5 percent, district officials said, adding that they have consistently budgeted below the state cap for the past 11 years.

Despite the budget’s approval, some voters continued to express concern about the financial impact on the community.

“Putting aside that enrollment in the district continues to decline while the budget keeps going up,” said one vocal resident who identified himself only as Mitchell. “My primary concern is the cumulative impact the sustained annual tax levy increases (are) having on community members who are financially less fortunate, especially as we’re navigating through record inflation.”

A major concern for some community members has been the status of the district’s reserve funds. The district had about $3 million in unappropriated funds as of last year. Additionally, employee benefit reserves have accrued significantly, with the employment retirement reserve standing at about $8 million. Mitchell and others have suggested that those and other surplus funds should be used to offset tax increases.

Joel Press, the district’s assistant superintendent for business and operations, said that state regulations limit the use of those funds, and added that it is fiscally responsible to maintain some reserves, but the district would stop adding to them if they grew too large.

Mitchell said he was also dismayed about how the school board lobbied for the spending plan, stating that it would cost the average household $115 a year, or 32 cents a day, more than a contingency budget. Several trustees had compared this sum to the cost of two pairs of shoes.

“That seemed very dismissive to me,” Mitchell said. “In my mind, the money for those two pairs of shoes can be quite a few gallons of milk or other essentials, especially for people on a fixed or lower income.”

Press said he could not single out any reason why support for the budget faltered this year.

“Enrollment in the vast majority of school districts on Long Island have been decreasing over the past number of years,” he said. He mainly attributed the decline to a recent phase-out of students from Island Park from West Hempstead schools.

On whether more parents have been sending their children to private schools?

“I don’t know if the number of parents sending their kids to non-public schools has increased,” he said. “It certainly hasn’t increased dramatically.

“I think there’s a complacency in general across the state since the tax cap has been implemented,” Press said. “Everyone thinks, ‘Well, you’re within the cap, so I’m not worried about it.’  It should pass without any real issue.”

Press took issue with some residents’ characterization of the district’s reserves and surpluses, saying that he had heard a flyer had been circulated around West Hempstead last May, exaggerating the amount of usable funds held in reserve.

“On that flyer there was a statement that the district had $17.8 million sitting in the bank,” he said. “That was the general gist of that flyer, that we had way too much in reserves and fund balance.

“It’s a lot more nuanced than the information that was presented in that flyer.”

District officials were successful in their efforts to draw more voters to the polls for the second vote: more than 2,300 ballots were cast on June 21, up from just over 1,800 on May 17.

“We do our budget presentations, we feel we’re presenting information that the community needs to make an informed decision about the budget, but it seems as though there was additional information that needed to be presented to the community,” Press said. “We are looking at ways that we can do a better job of getting information out on a more regular basis throughout the year, trying to rebuild ties with the broader community.”

CORRECTION: A previous version of this story provided inaccurate quotes for assistant superintendent Joel Press, and unintentionally misrepresented one of his posititions. We regret the error.