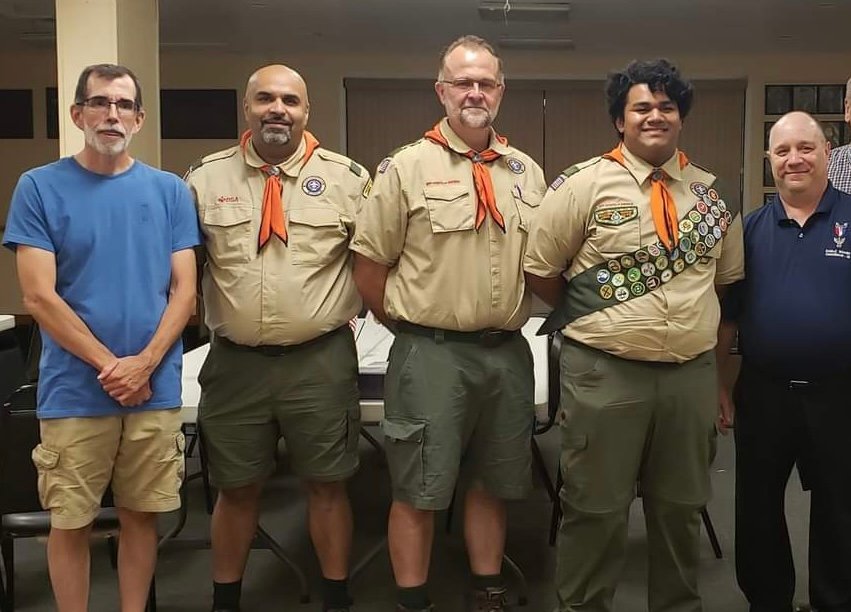 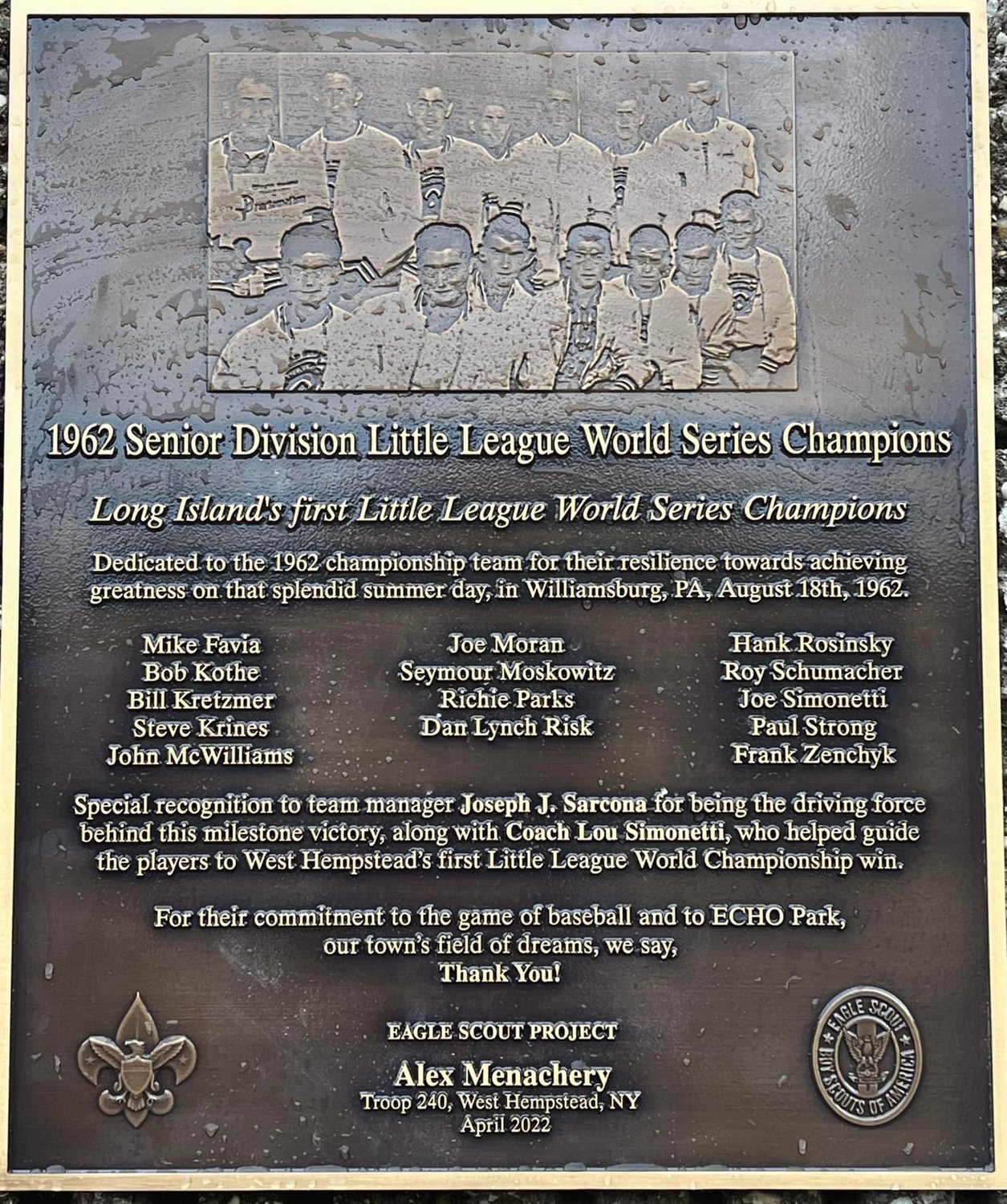 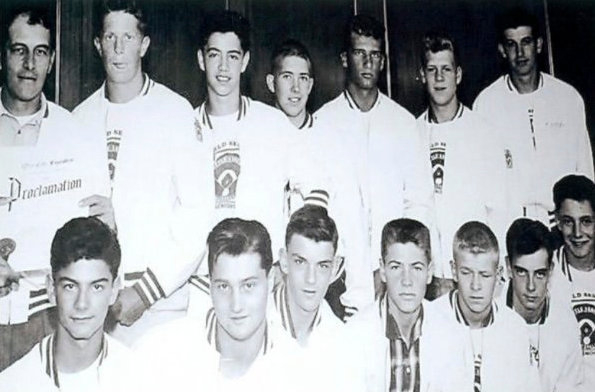 The team, above left, was the first on Long Island to win the Senior League World Series, and helped bring attention to Echo Park.
Courtesy Alex Menachery
Previous Next
By Kyle Chin

Menachery, a June graduate of Chaminade High School in Mineola, sat for his final interview for the Eagle rank on Aug. 25, when Scouting mentors Tom O’Neil and Ron Paracha, accompanied him as he presented the details of his project. Now all that remains is for the leaders at Scout Troop 240 to schedule a formal Eagle Scout ceremony at one of their monthly Courts of Honor.

Menachery’s interview took place exactly one week after the 60th anniversary of the West Hempstead squad’s victory in the Senior League World Series on Aug. 18, 1962. While he had completed work on the memorial in April, he waited for the anniversary to mark his achievement.

The decision to commemorate the historic team, the first from Long Island to win the Senior League Series, came after lengthy deliberations. “When I was deciding what I wanted to do for my Eagle Scout project, I was trying to think of things that had a huge impact on me in West Hempstead,” Menachery explained.

“First I was looking at the church, St. Thomas the Apostle, because I had gone there since I was really young, or the Knights of Columbus,” he added. “But they had a lot of stuff already renovated, and they actually had an Eagle project done a couple years ago, so I started expanding to other places in West Hempstead.”

Mechachery hoped to revive interest in a forgotten piece of history. “I thought that maybe I should create something so that not only everyone who plays Little League at Echo Park knows about it, but the whole town will know about it,” he added. “I just wanted to give some history to the town that’s been forgotten.”

Menachery stressed the 1962 team’s role in the development of Echo Park from an unofficial community meeting ground to a proper Town of Hempstead-maintained park. “It’s very different from what it was back then. That entire area was actually just a baseball field, pretty much surrounded and covered by trees,” he explained.

“It was just an area that was made into a field by a community,” Menachery continued.

“It wasn’t something that the government or the Town of Hempstead had at the time. It was just the families of the area who dug up the field so that the boys could play. After they won, it started becoming a much more serious and organized field.”

For the placement of the plaque, Menachery chose a spot near the field, not far from another plaque, this one honoring the West Hempstead Lions Club. The new metal plaque features an engraved picture of the team, a list of the players’ names, a special note of recognition to the squad’s manager and coach, and a note of credit to Menachery and the Boy Scouts. In addition to installing the plaque, Menachery also built a paved area surrounded by plants adjacent to the plaque.

The 1962 Senior League team, led by manager Joseph Sarcona, won the national championship in the league’s second year of existence. Sarcona was a World War II veteran, and was awarded a Purple Heart for his service in North Africa and Europe. When the Herald spoke with Menachery as he prepared to begin the project last fall, Sarcona’s son, William, voiced his appreciation for Menachery’s efforts.

“It honors the baseball team, my hometown, as well as my father, and Echo Park, which all played a role in this significant milestone, which was a first for Long Island, their first Little League World Series baseball title,” Sarcona said.

Menachery hasn’t yet given much thought to his Eagle ceremony — understandably, as he embarks on his freshman year at the New York Institute of Technology in Old Westbury, where he is planning a seven-year medical program, with a specialization in osteopathic medicine.