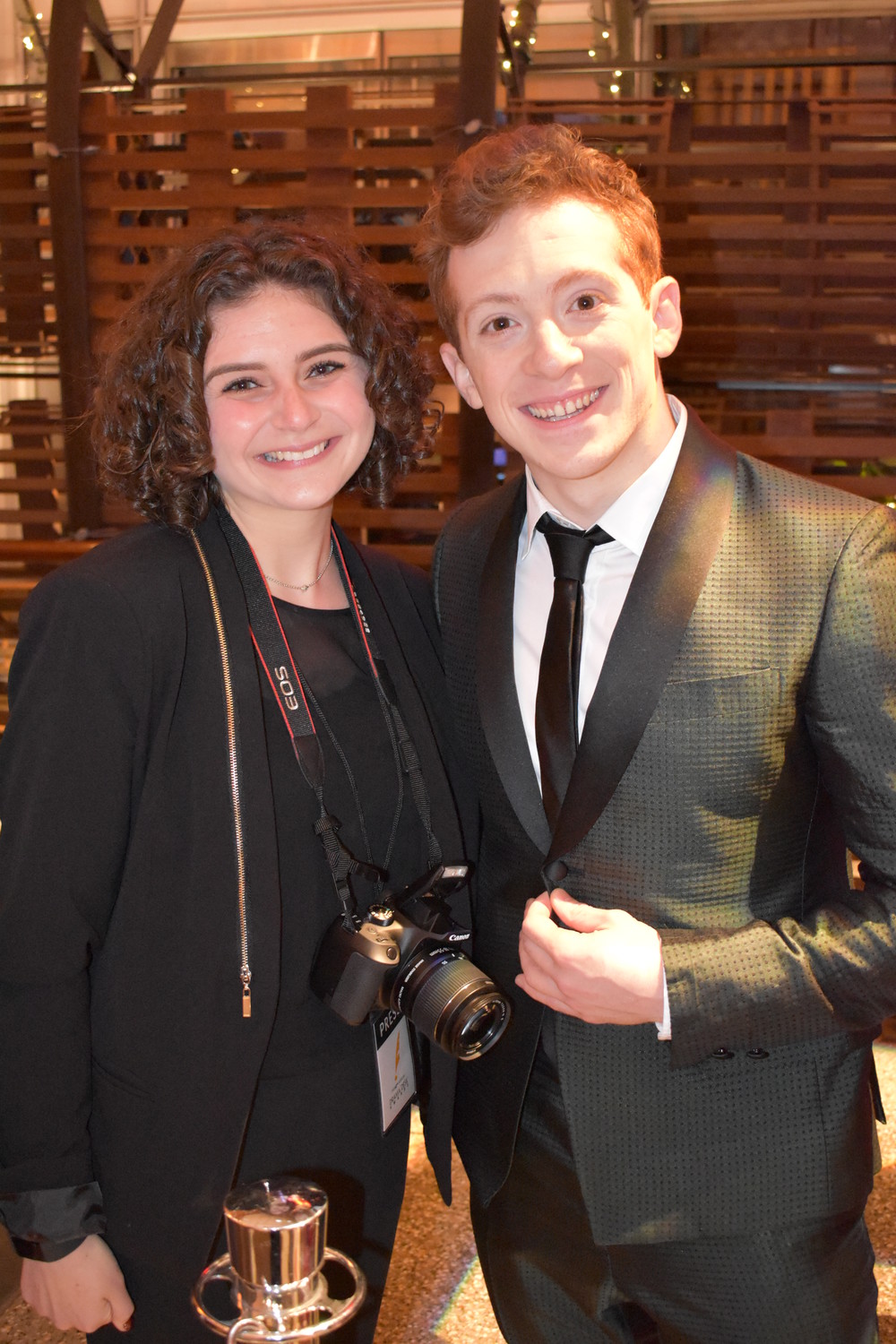 Zoe Malin had an opportunity to speak to Ethan Slater, who won a Drama Desk Award for his role in the Broadway musical “Spongebob Squarepants.”
Courtesy Iris Wiener
By Iris Wiener

It’s not every day that a high school student finds herself working on a red carpet, photographing celebrities such as Tina Fey and Lorne Michaels as they make their way into a prestigious awards event. However, it would come as no surprise to anyone that Zoe Malin, of Sea Cliff, would land such a gig; the intuitive senior is known for her gumption and passion for journalism, which is what ultimately led to her receiving an invitation to work as a member of the press at the 63rd annual Drama Desk Awards on June 3.

For those that believe it is all about connections, think again. Malin, 18, found her opportunity in high school. “I met an entertainment writer when she came to Michael Kleba’s IB Theatre class last year as a guest speaker, and I think my whole perception of theatre and journalism changed,” she said. “I was a theatre kid growing up, so when my favorite worlds collided it was the coolest thing ever.”

The writer, brought in an Off-Broadway actor, which Malin said helped her to realize the variety of ways one can report on theatre. “It doesn’t just have to be about a Broadway show,” she said, “it can be about issues within the theatre, like the inclusion of minorities and disabled performers.”

Subsequently, the writer, a member of the Drama Desk, remembering Malin’s passion, invited her to join her as a photographer and assistant at the Drama Desk Award’s red carpet and in the media room. The experience was beyond exciting for Malin.

“I was taking pictures and turned around to see who else was around me, and Tina Fey was two feet away!” Malin said.

When taking a few moments to observe what was happening around her she found it surprising that frequently the cameramen interacted with the talent walking the red carpet.

There were other surprised for her that day too. When she met the nominees being interviewed, she marveled at how humble they were and their appreciation for their craft. “Jelani Alladin [from the musical Frozen] said that the Drama Desk is made up of people who were committed to the shows and went out and voted, and it meant so much more to him than the Tony’s in that sense,” Malin said. “It re-solidified my understanding of theatre as a community and as a support system for everybody.”

She said she remembered experiencing the same connections working as a crew member on theatrical productions at North Shore High School.

Although she enjoyed witnessing the writer’s role in interviewing nominees such as Ethan Slater [who went on to win for his role in “Spongebob Squarepants”], Tony Kushner [who won for his play, “Angels in America”], Evan Ruggiero (“Bastard Jones”) and Alladin, she said she found herself more intrigued by the photojournalistic aspect of the experience.

It was new and something that she had not experienced before. “At the New York Times [as an intern] I didn’t do photojournalism,” she said. “Angel Franco, a photographer for the Times, did a lecture and we spent a day with him.”

Malin said she was inspired by his belief that a photo can tell a story. “I kept thinking about that when I was at the Drama Desk Awards,” Malin said. “I loved when the winners came right into the media room straight from getting the award. The first pictures changed from their last. The first was the raw emotion of having won, and the last was, ‘Okay, I’m done with the press, get me out of here now!’”

As she readies to begin studying journalism at Northwestern University in the fall, Malin is considering how she will use her varied experiences and unique knowledge of the professional world to better herself and her career. “I think you never want to put yourself into a box, especially now with the world changing so quickly and with the types of stories people are interested in, the type of news, and the different controversies that are going on in the world,” she says. “Technology is changing fast and people’s attention spans are shortening. I think the way people are absorbing information is so different now and it’s changing every day.”

Malin was recently awarded the Hank Logeman/News 12 Scholarship and was honored by the Press Club of Long Island. She is looking forward to living up to the many accolades and moving forward to ready herself for what she hopes will be her career someday.

“As a reporter I think it’s so important to never say, ‘Okay, I think I’m the best at writing, so I’m only going to write,’” she said. “You can’t do that anymore. You have to be good at everything a little bit just to keep up with the flow of the world.”