Dangerous interchange will be redesigned 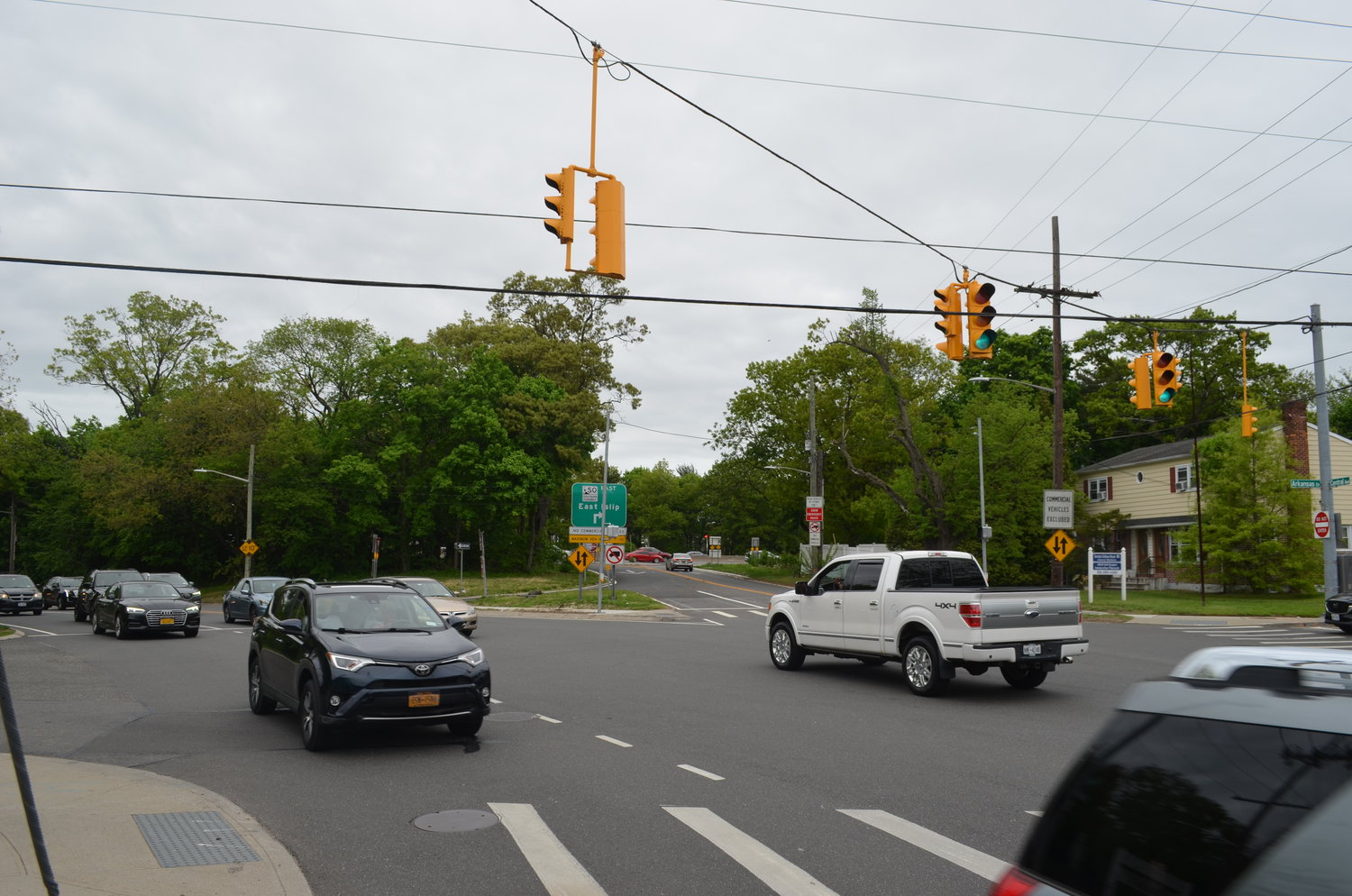 Traffic at the intersection of Stuart and Central avenues, looking toward the entrance and exit ramps of the Southern State Parkway’s Exit 13.
Tim Baker/Herald 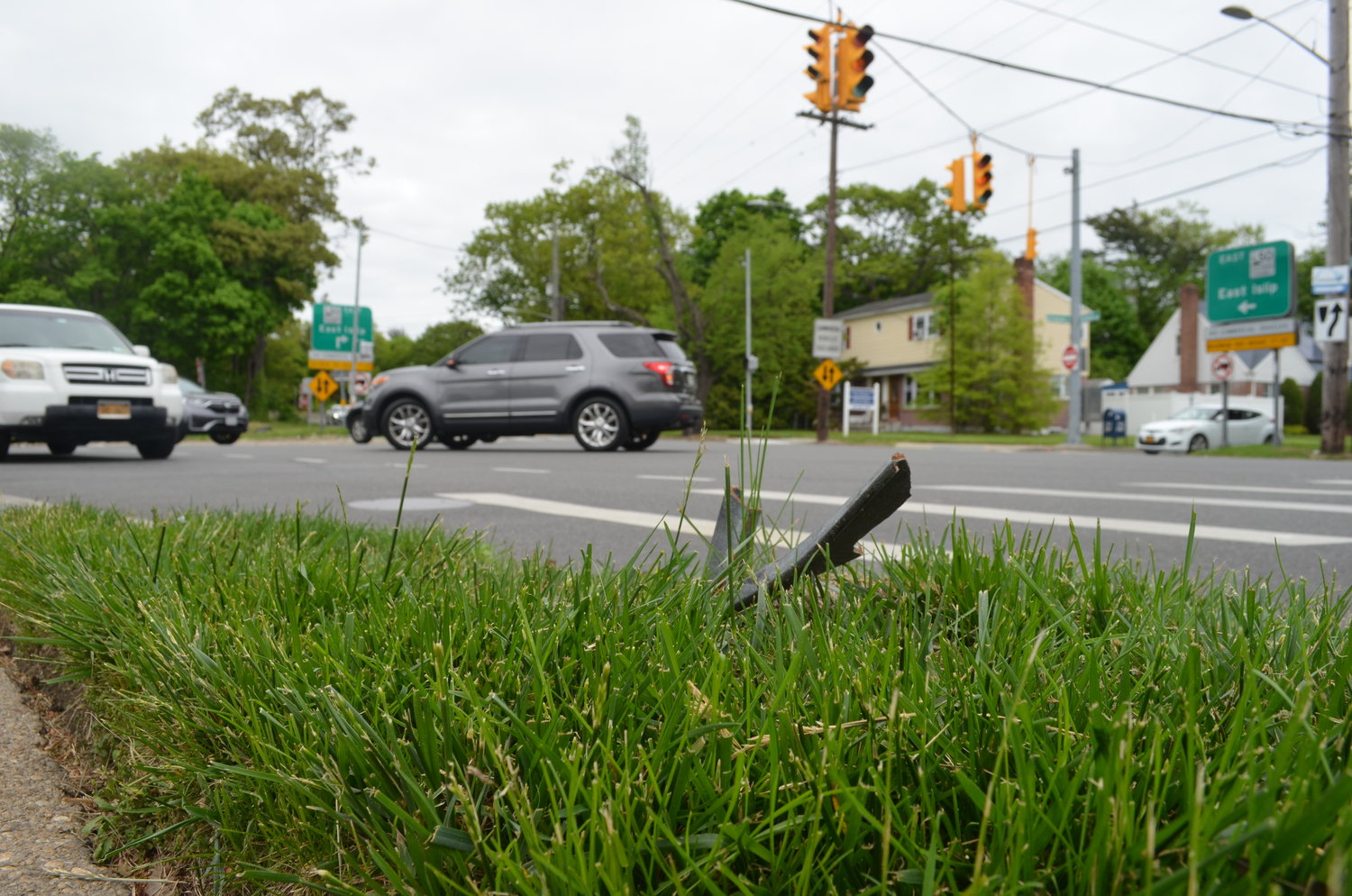 The torn remains of a light pole that collapsed after a car ran into it.
Tim Baker/Herald
Previous Next
Timeline

•Dec. 3, 2013: 14-year-old Mohamed Tarek is severely injured when he is struck by a vehicle on Central Avenue in North Valley Stream, near the entrance to the Southern State Parkway.

•February 2014: The State Department of Transportation, which maintains the parkway, agrees to conduct a study of Exit 13.

“It’s a nightmare.” That’s how resident Nayyer Zubair, and several others, described navigating the fast-moving traffic on the six-way convergence of roads at Exit 13 of the Southern State Parkway. Locals have long been concerned about the notorious intersection on the south side of the parkway, where Central and Stuart avenues meet the Southern State’s one entrance and two exit ramps.

While officials have deployed short-term fixes like a crossing guard and a pedestrian crosswalk to reduce the danger on the roadways and sidewalks, accidents have continued to happen. And talks by state and local lawmakers about making im-provements at the interchange have dragged on for years, with no major overhaul in sight.

Late last month, however, State Assemblywoman Michaelle Solages, a Democrat from Elmont, obtained $20 million in federal funding to reconfigure the Exit 13 ramps as part of Gov. Kathy Hochul’s five-year, $32.8 billion State Department of Transportation capital plan. The plan to redesign the parkway’s ramps is a major step forward for residents in what has proven to be a long, drawn-out fight for change.

Many local and state leaders first became aware of the dangers of the interchange nearly a decade ago, on Dec. 3, 2013. That night, Mohamed Tarek, a 14-year-old Elmont High School student, was walking home from a basketball game when an unlicensed driver struck him while Tarek was crossing Central avenue near the eastbound entrance ramp, leaving him in a coma. Police said that the driver was attempting to enter the parkway from the avenue’s northbound lanes.

Shortly afterward, officials pledged to take a serious look at the ramps on the interchange. The DOT, which maintains the parkway, agreed to conduct a study of Exit 13, according to the Herald. But those promises fell flat. A study never materialized, according to Solages, who told the Herald in 2018 that former County Executive Ed Mangano’s administration said it would conduct a study of the exit, but “I haven’t heard anything since.”

The same year, in response to state inaction, Zubair created a Change.org petition, which has since garnered roughly 670 signatures, urging state officials to redesign the entrance and exit ramps at Exit 13, to and from Stuart and Central avenues. The petition also noted the “desperate need” for a better left-turn signal and a separate left-turn lane for northbound traffic on Central Avenue turning left onto Stuart, as well as street lighting for pedestrians and traffic cameras to deter drivers from running red lights.

A map shows the six-way convergence of roads where North Central Avenue meets the Southern State Parkway, and the location of the busy nearby mosque, …

An area busy with pedestrians

Zubair and Tarek’s family both belong to the nearby mosque, the Masjid Hamza Islamic Center of the South Shore, which draws crowds of Muslims for weekly prayers on Friday afternoons, and hundreds more who attend daily prayers at sunrise and sunset, according to Zubair, who regularly attends services at Masjid Hamza.

Accidents and near misses occur regularly at the intersection, he said, adding that he and some of his close friends were almost struck there on several occasions over the years. The exit is also frequented by congregants, students and staff of the Hamza Academy, students from the Alden Terrace School, and congregants of the Valley Stream Baptist Church.

By late 2018, the original call for an Exit 13 traffic safety study was repackaged as part of a larger piece of legislation created by Solages and State Sen. John Brooks, and signed into law by then Gov. Andrew Cuomo, directing the DOT to study all of the parkway’s entrance and exit ramps, not just those at Exit 13.

The department was given a two-year window to determine whether adequate safety measures were in place to prevent collisions and wrong-way drivers, and to report on how such countermeasures could be improved. After the two-year study period, transportation officials presented their findings to the Legislature and the governor.

The study, a copy of which was obtained by the Herald, concluded that the “the incidents of wrong-way driving were 100 percent attributable to impaired driving,” and that the “Southern State Parkway has appropriate safety measures in place” that either met or exceeded national engineering standards for deterring wrong-way driving. A police review of accident reports did not indicate that ramp configuration or signage were contributing factors in any of seven instances of wrong-way crashes.

But the results of the study offer little insight into how the design of Exit 13 may have contributed to the long list of accidents there. Nor do they offer residents any specifics on whether major overhauls are needed to make the area safer, and what those changes would include.

Finally, a redesign in the works

But residents won’t have to wait for another study to see major changes in the near future. “The redesign of Exit 13 is currently in the planning stage to determine how to enhance safety and improve mobility at this part of the Southern State Parkway,” said DOT spokesman Jeorge Cymon.

“The Department of Transportation and Nassau County did a lot of fixes,” Solages said. “They put in new signage, a new crosswalk, but at the end of the day, they’re all bandages. They help mitigate the problem, but the only way to fix the problem is a complete redesign. There is a process that goes with this.

“It’s not like a light switch, where we could just start putting shovels on the ground and reconfiguring the exit. But within the five years, it’s going to get done.”

Residents still urge further modifications to be made, particularly including left turn signals at the intersection of North Central and Stuart avenues.

“I think the ramp redesign would make a difference, but I think what ultimately would be the safest option would be if there’s a left turn signal,” said nearby resident Jawad Chaudry, 28, who traverses the roadway daily.

“If drivers are trying to turn left as others are coming off the exit ramp, it causes traffic jams,” Chaudry continued. “That’s happened almost daily. And cars that come speeding down Central Avenue towards the highway create problems for pedestrians, especially since there’s a lot of foot traffic of people crossing between Stuart Avenue and Arkansas Drive. Many of them are school kids from the nearby mosque and the Alden Terrace School.”

“More than the exit, the intersection is more of a problem,” said a nearby resident who declined to be identified. “It’s absolutely horrifying to try and make a left-hand turn off of Central to come down Stuart, because drivers blow through the stop sign and there is no turn signal. I can’t tell you the number of accidents (there) have been at this intersection.”

In 2008 and 2019, data from the Nassau County Police Department Traffic Safety unit data show, 116 crashes occurring at the intersection of Central and Stuart avenues, 20 of which involved vehicles making left turns.