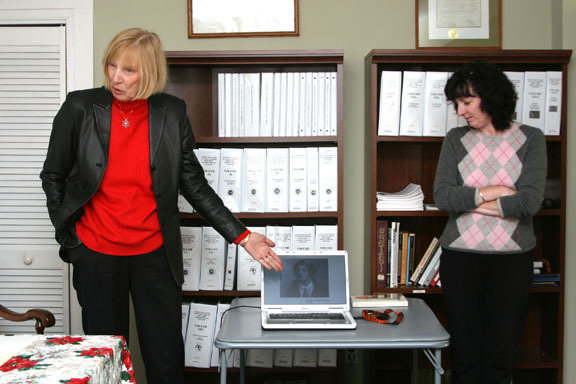 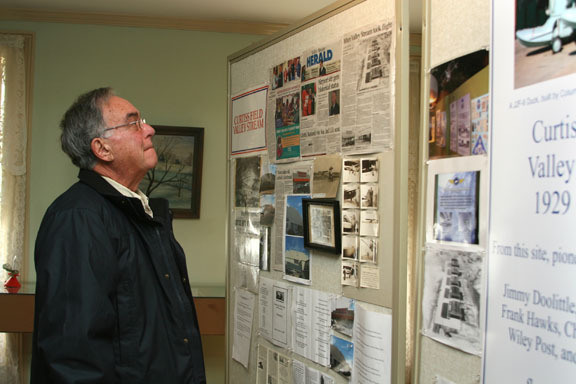 Frank Urgo glances at stories about the history of the old Curtiss Airfield.
Susan Grieco/Herald 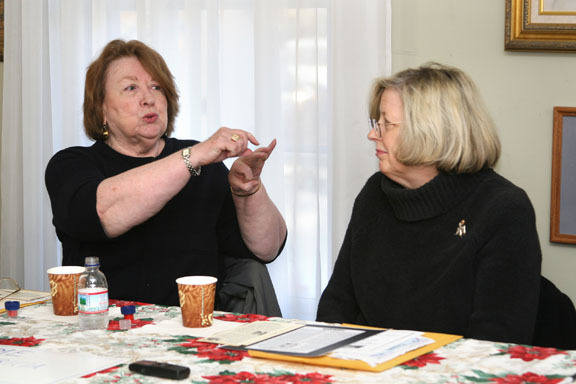 Patricia and Pamela Sullivan, daughters of Elinor Smith, held a question and answer session at the Pagan-Fletcher Restoration on Dec. 27.
Susan Grieco/Herald 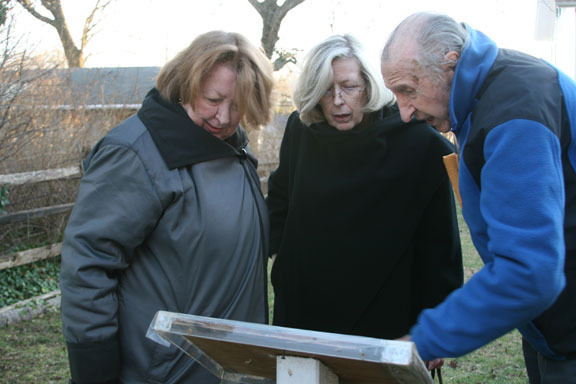 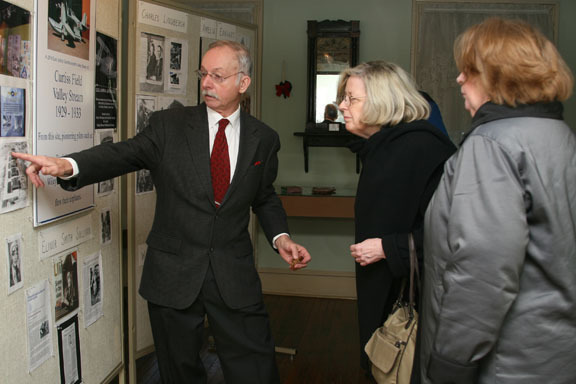 Guy Ferrara, president of the Valley Stream Historical Society, shows Pamela and Patricia Sullivan the display on Curtiss Airfield at the Pagan-Fletcher Restoration. They are the daughters of famous pilot Elinor Smith.
Susan Grieco/Herald
Previous Next
Andrew Hackmack

The daughters of famous flyer Elinor Smith visited Valley Stream on Dec. 27 to see the old Curtiss Airfield site and talk about their mother’s history in aviation.

Patricia and Pamela Sullivan spoke at the Pagan-Fletcher Restoration about their mother, who is 98 and lives in California. Smith’s father was an assemblyman from Manhattan, but the family spent their summers in Freeport. After the father lost a primary race, they moved to Long Island permanently. Smith stayed in Freeport and raised her family there.

Before their presentation, Historical Society President Guy Ferrara took Smith’s daughters on a tour of the former Curtiss Airfield site, which is where the Green Acres Mall now stands. Ferrara showed them the historical marker that was dedicated in October and includes Smith’s name among a half-dozen famous pilots who flew in and out of Curtiss Field.

The sign is in front of Home Depot, which was built on the site of two of the airport’s six hangars. Ferrara showed the daughters the other four hangars which are still standing, have been expanded and now house private businesses. He noted that during World War II, the hangars were used to store large quantities of food.

Back at the Pagan-Fletcher house, the daughters got to see a display on the famous pilots who flew from Valley Stream when Curtiss Airfield was open from 1929 to 1933. They also saw an emblem in the backyard that was once hung on one of the hangars where Home Depot is. Ferrara explained that Home Depot paid to have that emblem transported to and installed at the Pagan-Fletcher Restoration.

Patricia Sullivan, who lives in Manhattan, said this was her first visit to the Curtiss Airfield site. She said she appreciates the efforts of the Valley Stream Historical Society to honor her mother’s aviation history. “I learned there’s a real avid interest in this,” she said, “and thank God there is so it won’t be forgotten.”

Pamela, of Glen Cove, said the tour was very informative and particularly liked seeing the emblem that was preserved from one of the hangars. She, too, had never been the site of Valley Stream’s airfield.

Who is Elinor Smith?

In 1928, at just 17 years old, Smith flew under the four East River Bridges. Ferrara said he is trying to get a copy of the film of her accomplishing this feat to give to the daughters. There were newsreel crews at each bridge that day.

Cynthia Krieg, of the Freeport Historical Society, said the University of California, Los Angeles library has old Hearst movie reels and should have the footage of Smith flying under the bridges.

Ferrara noted that Smith still has the record as the youngest female pilot to receive her license. She was 16 when Orville Wright signed her certification.

One fact many people don’t know, daughter Patricia Sullivan said, is that Elinor Smith is not her real name. Her grandfather, Tom Ward, was an actor in the vaudeville era but because there was another actor with the same name, he went by Tom Smith. He loved to fly and would take young Elinor with him a lot.

“Everyone assumed Elinor Smith was her name,” she said, “but all her classmates in Freeport knew her as Elinor Ward. It wasn’t to deceive anyone. It was just something that happened.”

Smith was closest with her son, the daughters said, because he also took an interest in flying. After going through the U.S. Naval Academy in Annapolis, he went to Stanford and was part of the ROTC there. He fell in love with California and decided to stay. Smith eventually followed. “She always loved California so that was no sacrifice to move out there,” Patricia said.

Well into her 70s, Smith would give talks about her role in aviation history, Patricia explained. Ferrara said he spoke to Smith by phone as recently as Christmas Eve and said she was excited her daughters would be making the presentation in Valley Stream.

He noted that Smith performed in many air shows at Curtiss Field. These shows were popular during the Great Depression and were used to raise money for the poor or for hospitals. Ferrara said Smith would always donate what she earned from her performances to charity.

Many of Smith’s friends in the aviation industry died because they would be flying at dusk and hit high tension wires near the airport. Flyers wanted wires either moved farther away from airfields or put underground. Finding it tough to fight the utility companies, the flyers organized and petitioned Albany with Smith taking a lead role. That is how she met her husband, an attorney and state legislator.

The two were married when Smith was 21. Patricia Sullivan said there is a picture of the two of them standing at the governor’s desk from when a bill was signed into law about moving the high tension wires.

Smith was also a member of the 99s, a group of female pilots that was formed at Curtiss Airfield. Amelia Earhart was the first president.

Pamela noted that many of her mother’s friends were men, but it wasn’t something her father was ever jealous about. “He was so content,” she said. “That was her world. She did have a life much removed from us.”
Report an inappropriate comment