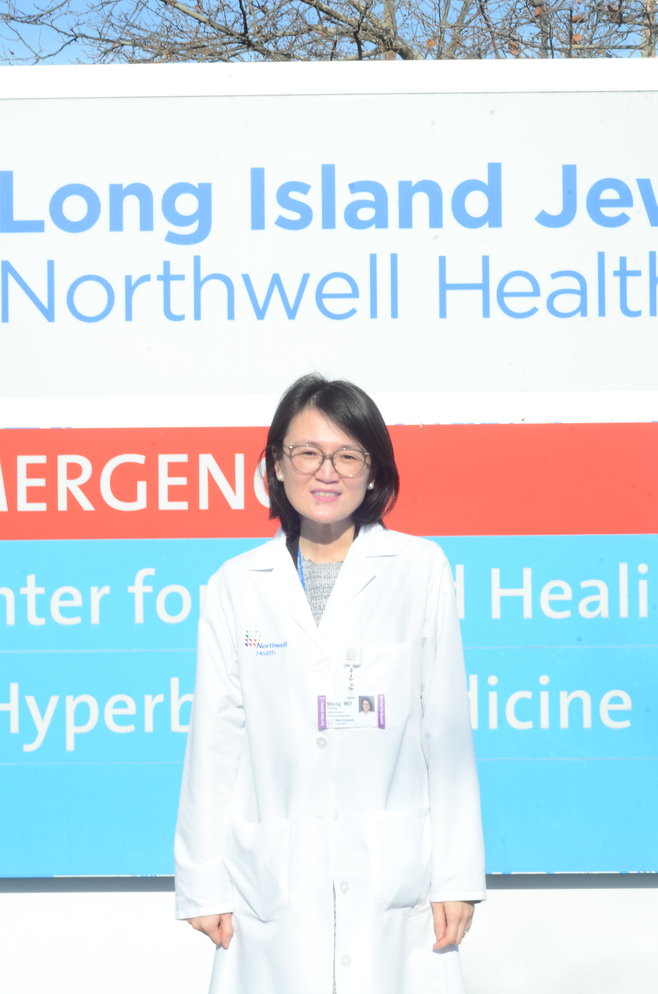 I think there is a lot ahead of us, but if we all aim at the same goal, focusing on patient care and safety, we’ll get there.”
Angel Meng, LIJ Medical Center
By Juan Lasso

While growing up in Taipei, Taiwan, as the daughter of a Taiwanese diplomat, Dr. Hsiang-chi "Angel" Meng, 42, spent four years of her childhood with her family in Malawi, Africa, as part of her father’s work. In Malawi, she witnessed firsthand how a lack of proper medical care affected her family and her makeshift community.

“I remember while we were in Malawi, we only had one physician who took care of the embassy workers and the locals in the community,” Meng said. “And if he was sick or had to travel, we didn’t have any medical resources.”

When her mother had kidney stones, she was brought to a hospital that was “pretty much an open field,” Meng said. Without the proper equipment, she suffered excruciating pain in her abdomen and had to be flown to Johannesburg, South Africa, for lithotripsy, a non-invasive medical procedure that destroys the hardened stones.

While her mother recuperated, that moment and others like it were seared into Meng’s memory as she came to realize for the first time the importance of having proper medical necessities. It was a realization that would lead her to study medicine and find a community of medical professionals at Northwell Health. Now, Meng has risen through the ranks not only as a respected medical practitioner, but as medical director at Northwell’s Long Island Jewish hospital in Valley Stream.

Meng, who began her role in mid-January, is responsible for managing the staff and procedures for a multi-million-dollar healthcare institution that though far removed from the medical limitations of her community in Malawi, faces its own resource constraints. The hospital continues to experience staff shortages and a taxed hospital capacity caused by the latest Covid surge.

But the pandemic stressors have failed to derail the hospital’s essential operations, according to Meng, in large part because “everyone has been very supportive and that is the beauty of being part of a big system like Northwell. There is a lot of resilience. Everyone has been reaching out and filling a need as indicated.”

Then there’s the fact that when managing a hospital under extraordinary circumstances, she has been here before. Having been promoted to associate medical director at Lenox Hill Hospital in May 2020 on the heels of the first Covid-19 wave, Meng was pivotal in beefing up the hospital’s patient capacity and ensuring its quality of care.

Dr. Daniel Baker, the medical director at Lenox Hill Hospital who worked side by side with Meng, said he regarded her as the “point person” in “coordinating the care we had between our hospital and the USNS Comfort and the Javits Medical Center,” where government medical care was provided. She identified patients who could be safely transported to these locations and took an expansive view of the hospital system, identified which patients could be safely discharged and where. It was a feat that proved particularly difficult because “so many people had distinct criteria for accepting a discharged patient” caused by new Covid regulations.

“She’s always been an exceptional pleasure to work with. She is diligent, thoughtful, compassionate and very good at advocating for her patients,” Baker said. Before her tenure as associate medical director, she began work as a newly minted doctor and started her residency at Lenox in 2009, where she became an attending physician practicing internal medicine.

“I’ve watched her grow [throughout her career at the hospital]…as she started to really learn the important pieces of how we can find goals that are patient-centered but also hospital-centered and align those two together,” Baker said. “It was a natural step in her leadership transition to bring her on as associate medical director.”

One of the things that differentiated Angel from the handful of other closely vetted job candidates that made the shortlist was her experience as an associate medical director, according to LIJ Executive Director David Seligman. She deeply understood “the role required in terms of time commitment, competency, and leadership,” Seligman said. “That was easy for us.”

Meng’s past medical history also speaks for itself, noted Seligman, with a deep understanding of a range of medical areas.

Meng received her bachelor’s in molecular biology and biochemistry from Rutgers University in 2002 and began her career as a research assistant at Northwell Health’s Feinstein Institutes for Medical Research. While at Feinstein Institutes, she decided to pursue medical school, graduating from the New York College of Osteopathic Medicine in 2009.

Meng’s current focus is to ensure that she remains “visible and available” to her medical staff, enhance the patients’ transition of care, and improve readmission reduction and patient experience and safety.

“Everyone on staff is very talented and very resilient,” Meng said. “I think there is a lot ahead of us, but if we all aim at the same goal, focusing on patient care and safety, we’ll get there.”