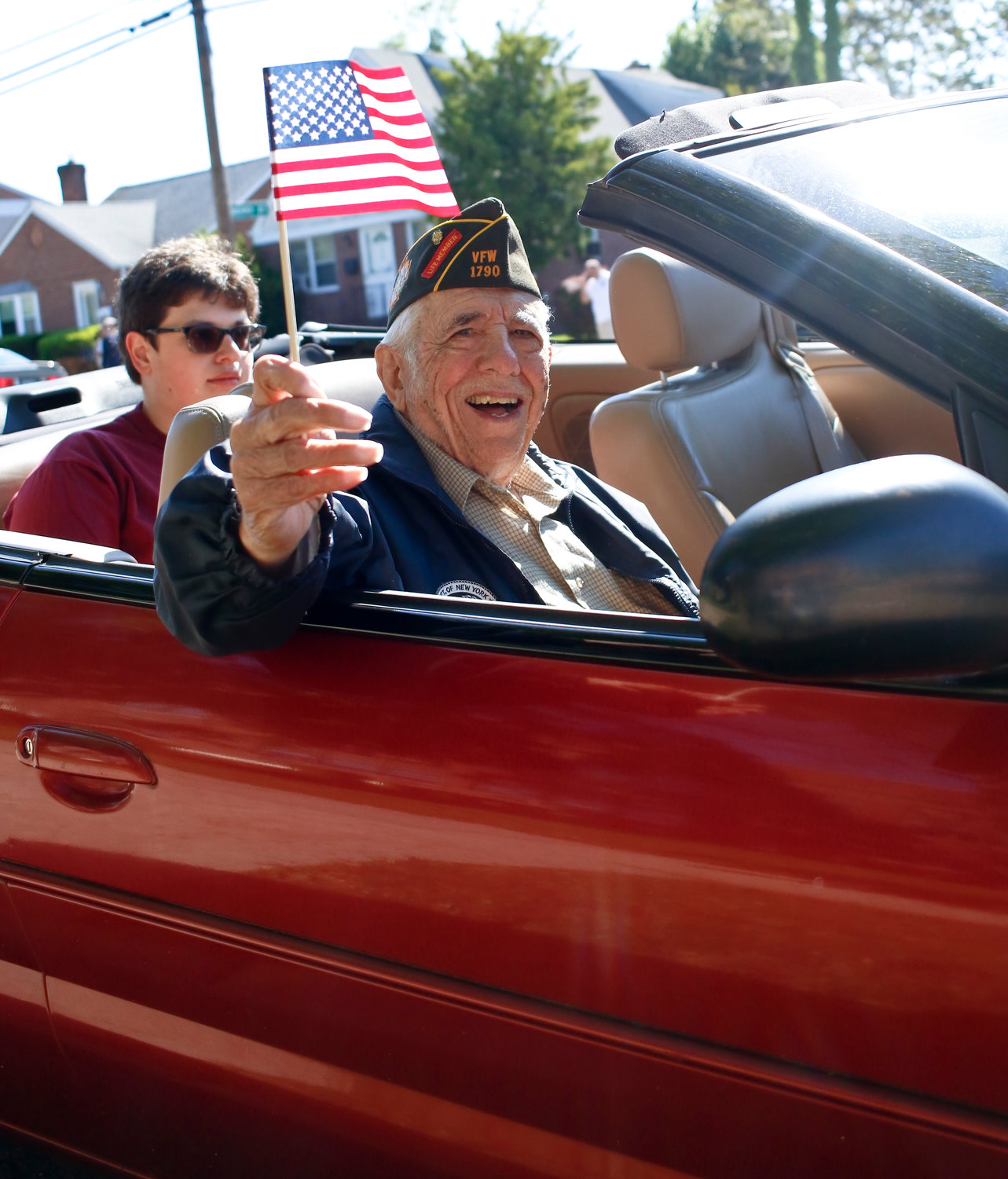 Louis Palermo at the 2019 Memorial Day parade. He was well known in the neighborhood and active in many local civic groups up until the weeks before his death.
Christina Daly/Herald 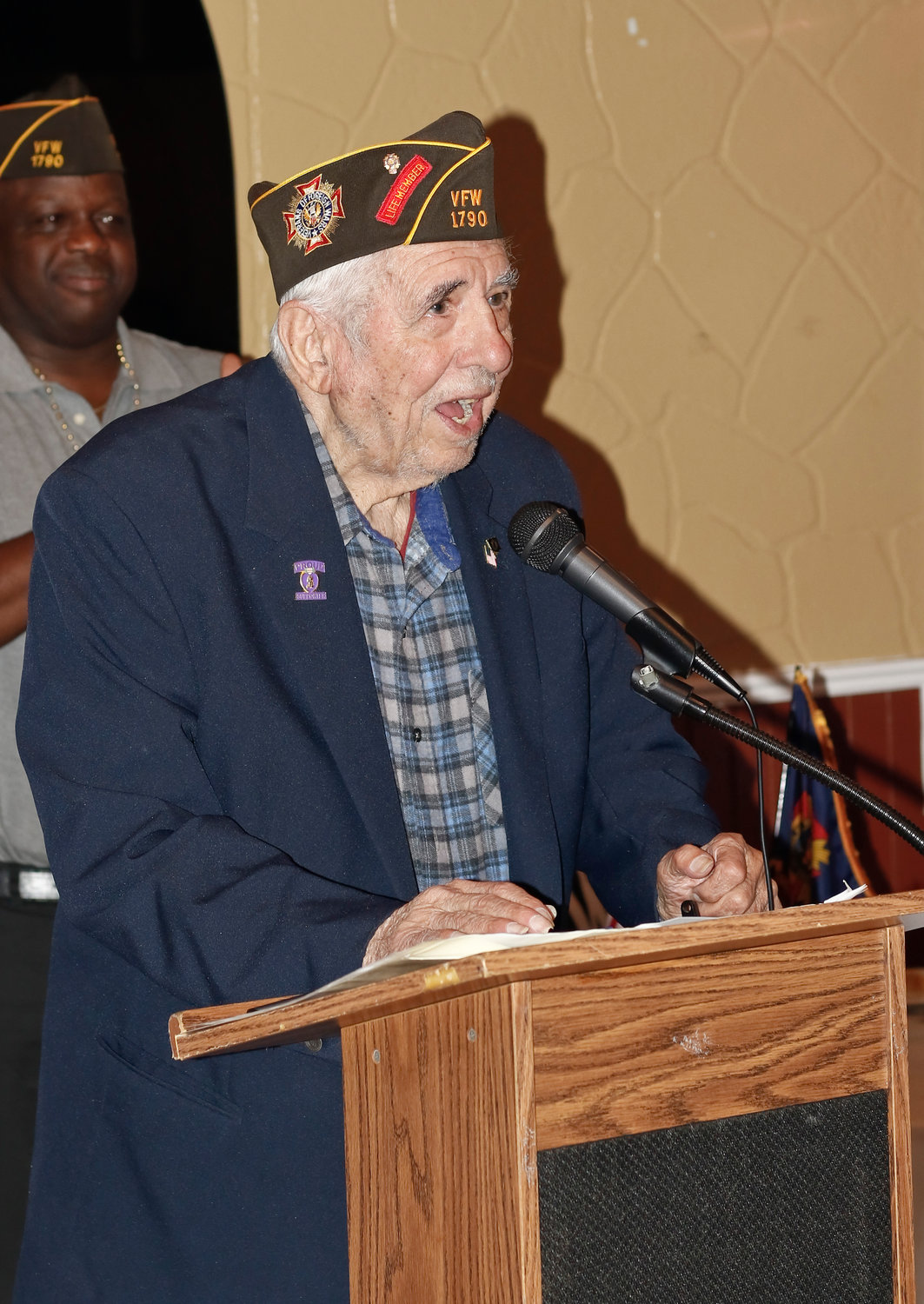 Palermo speaking at the rededication of VFW Post 1790 in honor of former Commander Joseph Marando Jr. in 2019.
Christina Daly/Herald

Palermo, left, in 1945. He was the last living World War II veteran in Valley Stream known to have taken part in the D-Day invasion.
Courtesy Louise Palermo 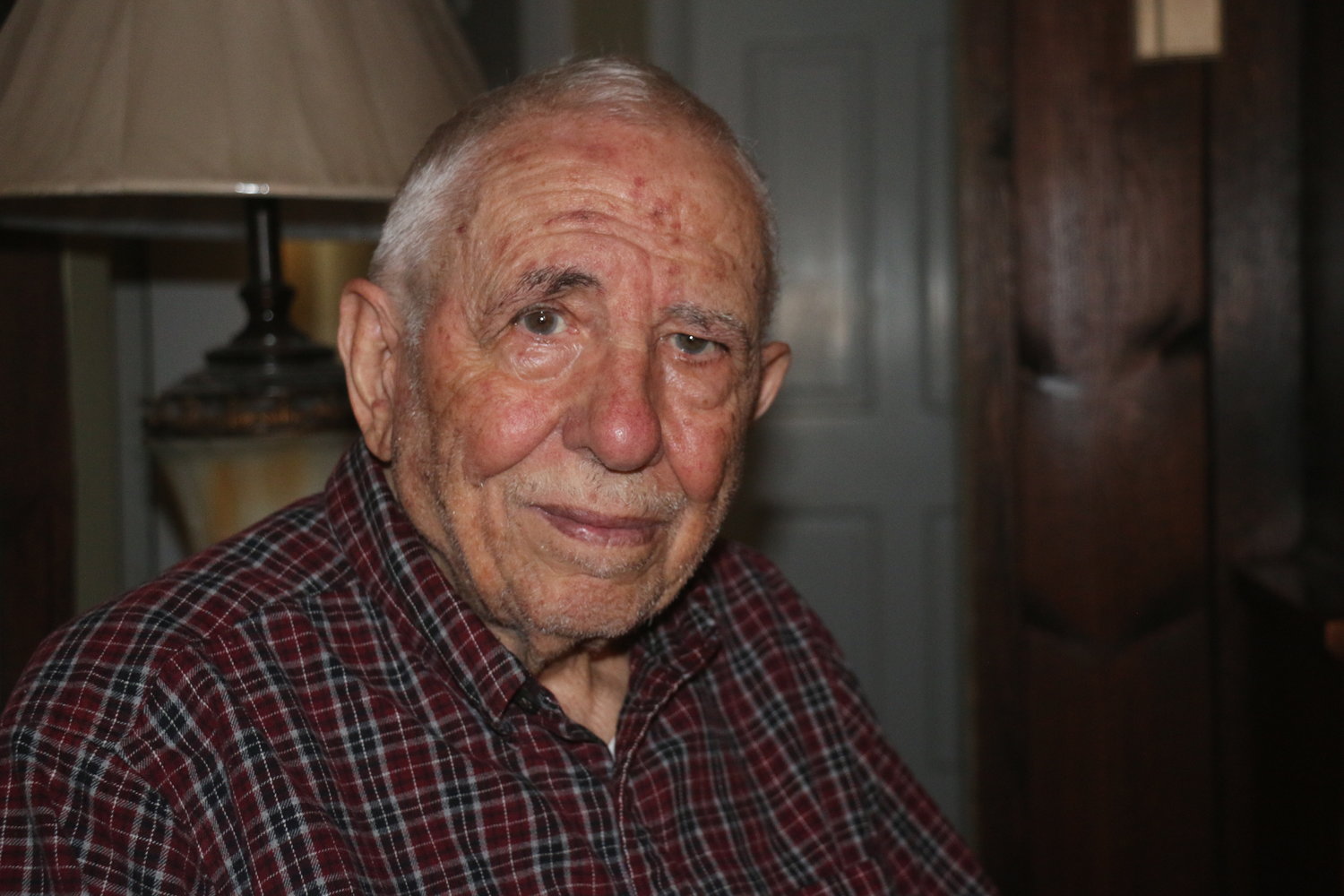 Palermo didn't speak much of his experiences during World War II until later in life, his wife had previously reported.
Micah Danney/Herald
Previous Next
By Peter Belfiore

Louis Palermo, the last known surviving D-Day veteran in Valley Stream and a well-known figure in local veterans and civic groups, died on Dec. 12. He was 94.

He was among the last members of the Greatest Generation still living in the neighborhood. The cause of death was complications of Covid-19, friends reported.

Since moving to Valley Stream from his native Brooklyn 44 years ago, Palermo had served as commander of the Valley Stream Veterans of Foreign Wars Post 1790 and the Franklin Square American Legion Post 1014. And he was an active member of the Valley Stream Chamber of Commerce, the Disabled American Veterans, the Father Thomas F.B. Carroll Knights of Columbus Council 4566, and the Long Island Society of Italian-Americans, as well as a parishioner at the Holy Name of Mary Roman Catholic Church.

Palermo did not speak much of his service during World War II until later in life, his wife of 62 years, Norma, said in a previous interview with the Herald. The two lived in a home on Sunset Road and had two children, John and Joan, and four grandchildren.

Palermo was 18 and a private first class Army infantryman assigned to storm the German-held beaches of Normandy, France, on June 6, 1944, as part of the D-Day invasion — the largest amphibious assault in history.

He was one of 150,000 soldiers to come ashore during the opening hours of the battle, fighting to overtake German fortifications overlooking the stretch of shore that invasion planners called “Omaha,” the site of some of the bloodiest fighting.

“I’ll tell ya, we lost a lot of lives there,” Palermo told the Herald in an interview for an article commemorating the 75th anniversary of the battle in 2019.

He recalled plunging into the Atlantic after the door of his Higgins amphibious landing boat dropped, and wading for 10 minutes through the rough waters as some of the soldiers around him drowned under the weight of their gear.

Once on the sand, he laid flat for an hour, praying a bullet wouldn’t hit him, until he heard the order to move up, he said.

More waves of troops landed, and Allied naval artillery had softened the German fortifications somewhat. Small groups of riflemen and Army Rangers penetrated the bunkers above the beach, and by the time Omaha was under Allied control, 2,500 solders were dead and 1,000 more wounded.

“If anyone survived, they were lucky,” Palermo said of the fateful day. “I was lucky.”

The battle was widely regarded as the beginning of the end for Germany during World War II, but came at a great cost. Within six days, about 4,400 Allied and anywhere from four to 9,000 German soldiers were dead, as Allied forces secured the beaches and began moving inland.

Palermo continued fighting as the Allied forces pushed east to Berlin, living in foxholes and taking part in pivotal engagements such as the Battle of the Bulge, in which six months after the Normandy landings, the Germans attempted a desperate, failed counteroffensive in the French Ardennes Forest.

He was injured there, catching a piece of shrapnel from an artillery shell near his shoulder, and said the fighting was nearly as bloody as he had experienced on Omaha Beach. After a brief recovery, Palermo continued to fight until near the end of the war.

Among the 16 million Americans who served during World War II, Palermo was one of 325,000 still alive, according Central High School history teacher and amateur historian Chris Critchley, who got to know Palermo well in recent years.

“Lou Palermo was of America’s Greatest Generation,” he said. “He survived the Depression, World War II and came home to raise a family in suburban Valley Stream. His surviving the D-Day invasion gave him such an appreciation for life that those of us who have never experience combat can’t understand. He told me the real heroes were his buddies that never made it back home. He will be sorely missed by many.”

In Valley Stream, he was well known in the various local veterans groups. Kevin Hill, current commander of VFW Post 1790, said Palermo was one of the first people he met at the post upon his retirement from the Marines in 2014, and encouraged him to join.

“He explained how important it was for the younger guys to join to keep the VFW going,” Hill recalled.

In particular, he said, Palermo imparted on him the importance of camaraderie among the country’s returning service members, regardless of which branch they served in.

“We all tease each other about being in the Marines, Navy, Army or whatever, but regardless of the uniforms, we all saluted the same flag, he told us,” Hill said.

At the VFW, “he was a fixture in the hall,” he said of Palermo, rarely missing a meeting and driving himself up until the last weeks of his life.

“When Lou spoke, everyone listened,” said Post 1790 Chaplain Deacon Christopher Barber said, who had joined in 2005 after returning from his service Iraq. He said Palermo was well regarded there as a leader.

“He was a great listener, and sometimes a leader has to just listen,” he said, noting that even in disagreements at the post, Palermo met them with a smile, without condescension.

“He never gave you a feeling that he was against you,” Barber recalled. “It was always a teaching moment when he spoke to you.”

“Lou was a genuine hero,” Mayor Ed Fare said, remarking how active Palermo was in Valley Stream, saying he was an “all-around respected community member.”

Palermo was buried at Pinelawn Memorial Park in Farmingdale after a funeral Mass at Blessed Sacrament Church on Dec. 28. In lieu of flowers, his family requested that donations be made in his name to the Wounded Warrior Project.