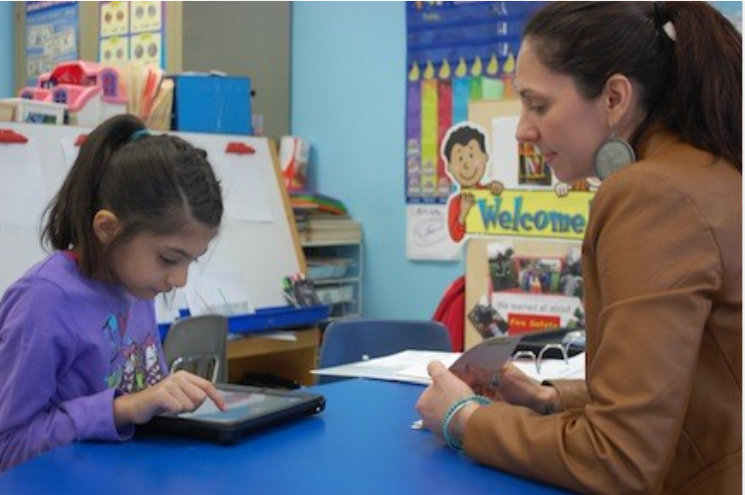 A child affected by childhood apraxia knows what they want to say, but cannot physically produce the sounds or words.”
Michele Tritschler, Speech language pathologist
By Juan Lasso

From the moment they’re born, children run the race to acquire the vital speech and language skills that set them up for the rest of their lives.

And while children typically run at their own pace, those who suffer from speech disorders often don’t reach the important language milestones of their peers. But one can be especially troublesome — childhood apraxia of speech, which makes it difficult for kids to accurately move their mouth muscles while talking.

But it’s not because the muscles are weak.

“A child affected by childhood apraxia knows what they want to say, but cannot physically produce the sounds or words,” said Michele Tritschler, a speech and language pathologist who specializes in apraxia. “The signal from the brain to their mouth is disrupted, and they are unable to move their jaw, lips, tongue and cheeks in order to produce the sounds, words, phrases and sentences that they want to say.”

And in the long, varied menu of speech disorders, CAS — as it’s called — is quite rare. In fact, childhood speech apraxia affects just 1 in every 1,000 children in the United States, It’s about as common as Down syndrome.

Yet, despite its low incidence rate, Tritschler was determined to convince Mayor Edwin Fare to recognize May 14 as Childhood Apraxia of Speech Day in the Village of Valley Stream.

Fare quickly approved the request, playing at least a small role in raising the public awareness of a condition often overlooked by parents and experts alike. The result? Children with apraxia tend to be misdiagnosed or not diagnosed at all for years on end.

“Childhood apraxia of speech is still unfamiliar, misunderstood, and continues to have a significant impact on children and their families,” Tritschler said. “It can be difficult for families to find professionals who are trained to diagnose and effectively treat apraxia.”

Not all speech language therapists have the proper training and know-how to diagnose, let alone treat, CAS. That difficulty stems in part from its shared symptoms with other more common speech disorders, not to mention the disorder can occur along with other communication challenges.

Like dysarthria, actually caused by weak or hard-to-control muscles. Phonological delays and delayed language — a form of speech simplification past the age children typically grow out of it — and autism, among others.

And because kids develop verbal abilities at different rates, a child battling with CAS is often prescribed conventional speech therapy while specialists and families wait and see if their verbal abilities will naturally catch up.

But for children with apraxia, this strategy is all but doomed to fail.

“The only proven treatment for CAS is intensive speech therapy, which is quite costly as it extends over many years for these children,” Tritschler said. “Treatment from a speech-language pathologist who is trained in techniques that focus on the principles of motor learning.”

But even once a diagnosis is determined, speech therapy can be a taxing and intensive process.

"Through endless determination and hard work, children affected with CAS continue through their struggles to learn a skill — speaking — that comes effortlessly to other children,” said Tritschler, who regularly assesses and treats children with apraxia.

Two out of every five specialists work in school settings, according to the state’s labor statistics bureau. Speech pathologists tackle the gamut of disorders and special needs in children who come from diverse backgrounds. It’s a tall order. But complete treatment and diagnosis of rare diseases like apraxia can often lie outside the bounds of what resource-stretched specialists can handle in public school settings.

Valley Stream schools provide a number of programs and services for students with disabilities, including apraxia, according to superintendent Don Sturz.