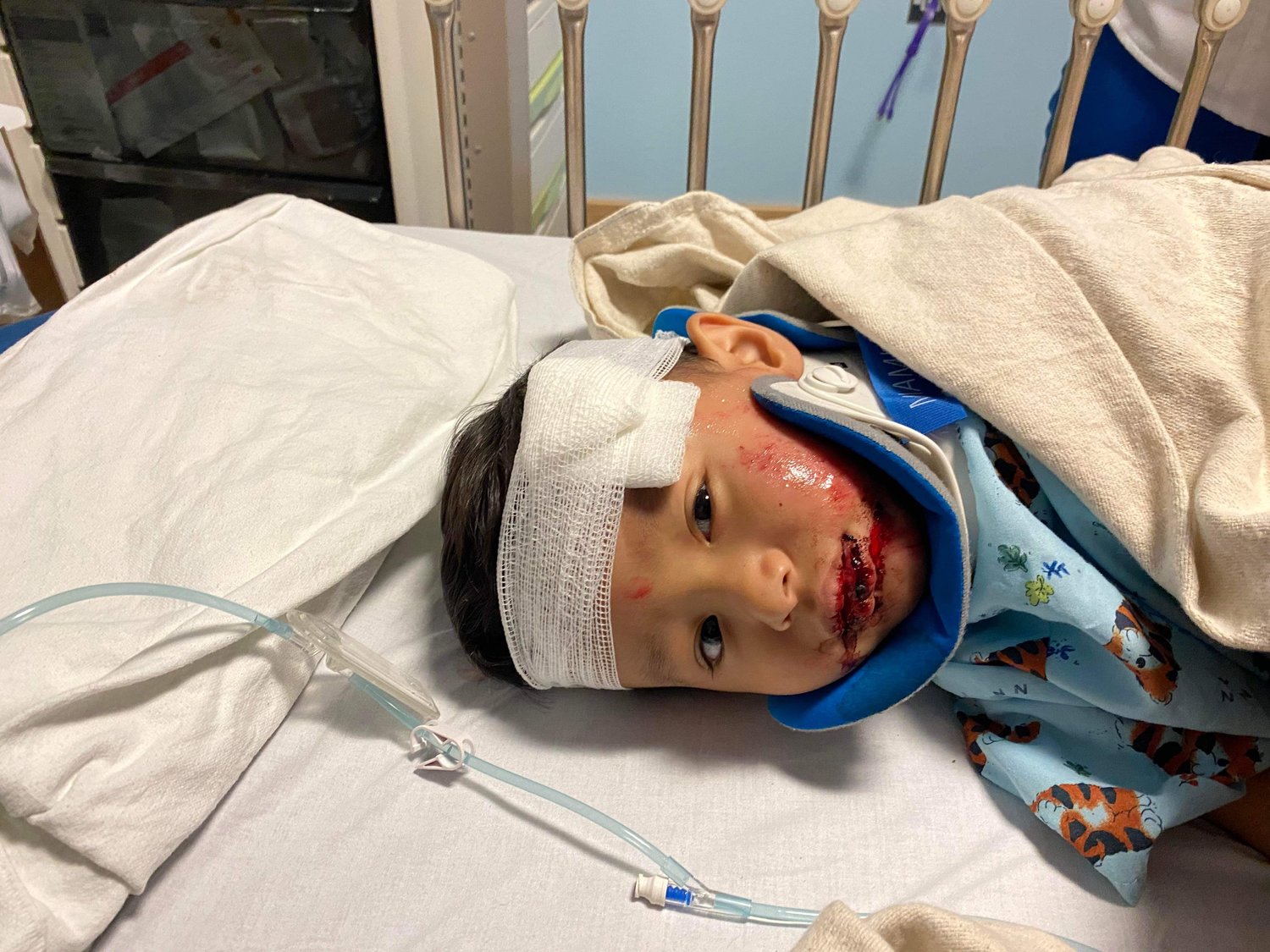 Chris Karmacharya, 2, was struck by an alleged inattentive driver on May 28 outside his Melrose Street home.
Courtesy Rajan Karmacharya

Our family just wishes that no other child would ever have to deal with something like this, especially in our area.”
Prince Karmacharya, Chris’s brother
By Juan Lasso

Roads have always been dangerous places for anyone not in a vehicle — and the coronavirus pandemic hasn’t improved them at all, even as fewer drivers got behind the wheel.

The problem, in many cases, has been distracted drivers — often on their cellphones while navigating with two tons of metal surrounding them. One careless maneuver could instantly mean the difference between life and death for anyone who crosses their path.

The investigation into the incident continues, although police don’t expect criminal charges.

But that day was simply a mellow Saturday afternoon on this narrow stretch of road. Chris had begged his mother, Sarita, to play outside while his older brother, James, shot some hoops in the front of their house. Sarita said she agreed, so long as Chris’s 14-year-old brother kept a close eye.

“Chris is an incredibly curious kid,” said another older brother, Prince. “Probably a lot more than me and my brother James were at his age. He’s very skittish as well, and just overall very energetic.”

James ended up on the other side of the street at one point, according to police. Chris wanted to join him, but two cars were about to cross their paths, leaving them standing on opposite sides of the road.

James extended his hand, Prince said, signaling for Chris to stop while the first car slowly passed. Then James waved Chris to cross, anxious to get him safely over to his side.

But that’s when the second car arrived.

“He was basically sent underneath the car,” Prince said. “The car drove far out enough for him to come out on the other end.”

Prince and his mother were outside just a moment later, calling 911. It was just before 7 p.m., when police arrived, and an ambulance rushed Chris to a nearby hospital.

The injuries are any parent’s worst nightmare. Chris suffered multiple lacerations to his head, broken teeth, and serious scrapes to his face, back and elbows.

Parts of “Chris’s backside were completely flailed,” Prince said. “And it was apparently quite a miracle, according to the doctors, that he survived.”

His head wounds were sutured and mended at the pediatric intensive care unit. Chris remained in the hospital for nearly a week, his distraught family at his bedside.

“My dad and I alternated between staying with my mom and Chris at the hospital,” Prince said. “We would sleep in the car and just basically didn’t go home until he was finally discharged.”

It was a haunting experience for the Karmacharya family.

“There were other children at the pediatric unit, and you could just hear them crying through the walls,” Prince said. “That put a lot of stress on Chris, and he was always asking when he can go home.”

But even when Chris did return to Melrose Street, life was still far from normal. While Chris has made a steady recovery physically, he is dealing with a newfound sense of anxiety and fear of going near any kind of street.

“Whenever we’re playing now, he tends to randomly blurt out in his native Napalese the words ‘road’ and ‘pain,’” Prince said. “We’ve brought this up at a couple of our follow-up appointments with his pediatrician and he says, it’s a result of him being reminded of the pain” of that incident.

Prince is working through his own sense of guilt over what happened.

Moments before the accident, “mom had asked me to look after Chris,” the 20-year-old said. “I was just feeling so tired and exhausted that day that I told him that I couldn’t.”

Instead, Prince took a nap.

“She left Chris in the care of James, who is still a kid himself,” Prince added, “and a little bit rough when it comes to looking after him.”

But the accident also shines light on what many describe as the outsized rate of reckless driving felt across Long Island in recent years, leading to more severe injury and, at worse, loss of innocent life.

Motor service organization AAA has identified a “significant increase in bad driving” since the pandemic, citing issues of excessive speeding, impaired and distracted driving, as well as driving without a seatbelt.

And last year, Nassau County ranked third-highest in the state for vehicle-related fatalities — 78 deaths — according to the Institute for Traffic Safety Management and Research.

Rajan Karmacharya, Chris’s father, has urged the Nassau Traffic Safety Board to put up a signboard alerting drivers to slow down on Melrose — something county officials say they’re ready to do. Traffic safety experts suggest other roadway modifications like rumble strips, bicycle lanes and narrower roads could help curb accidents — even more than police enforcement alone.

“Our family just wishes that no other child would ever have to deal with something like this,” Prince said. “Especially in our area.”