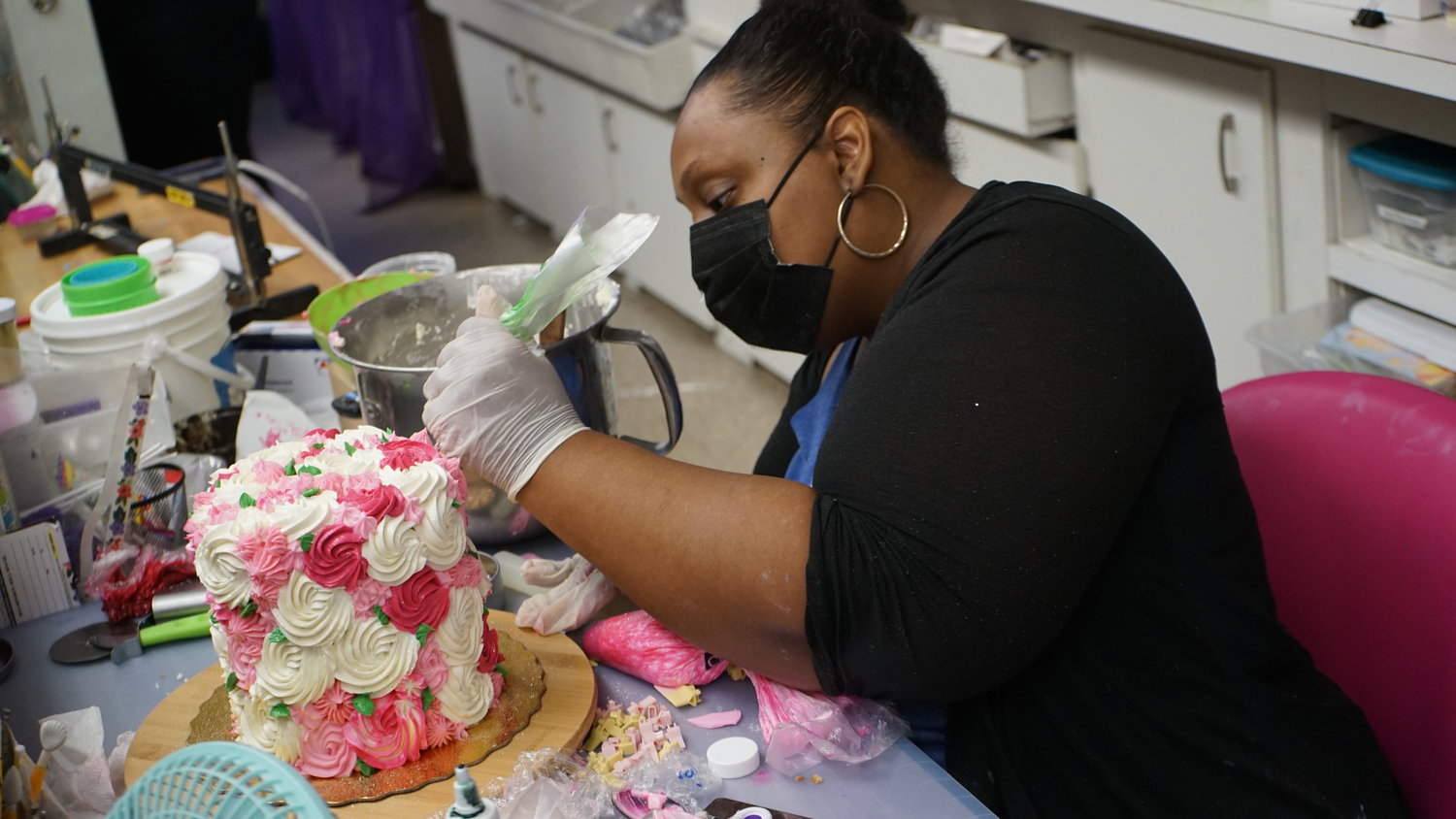 Caprice Campbell decorated a custom-ordered rosette cake at The Best Goodie Bag. Two of the shop’s owners are set to appear on the Netflix series “Sugar Rush” on Nov. 27.
Peter Belfiore/Herald 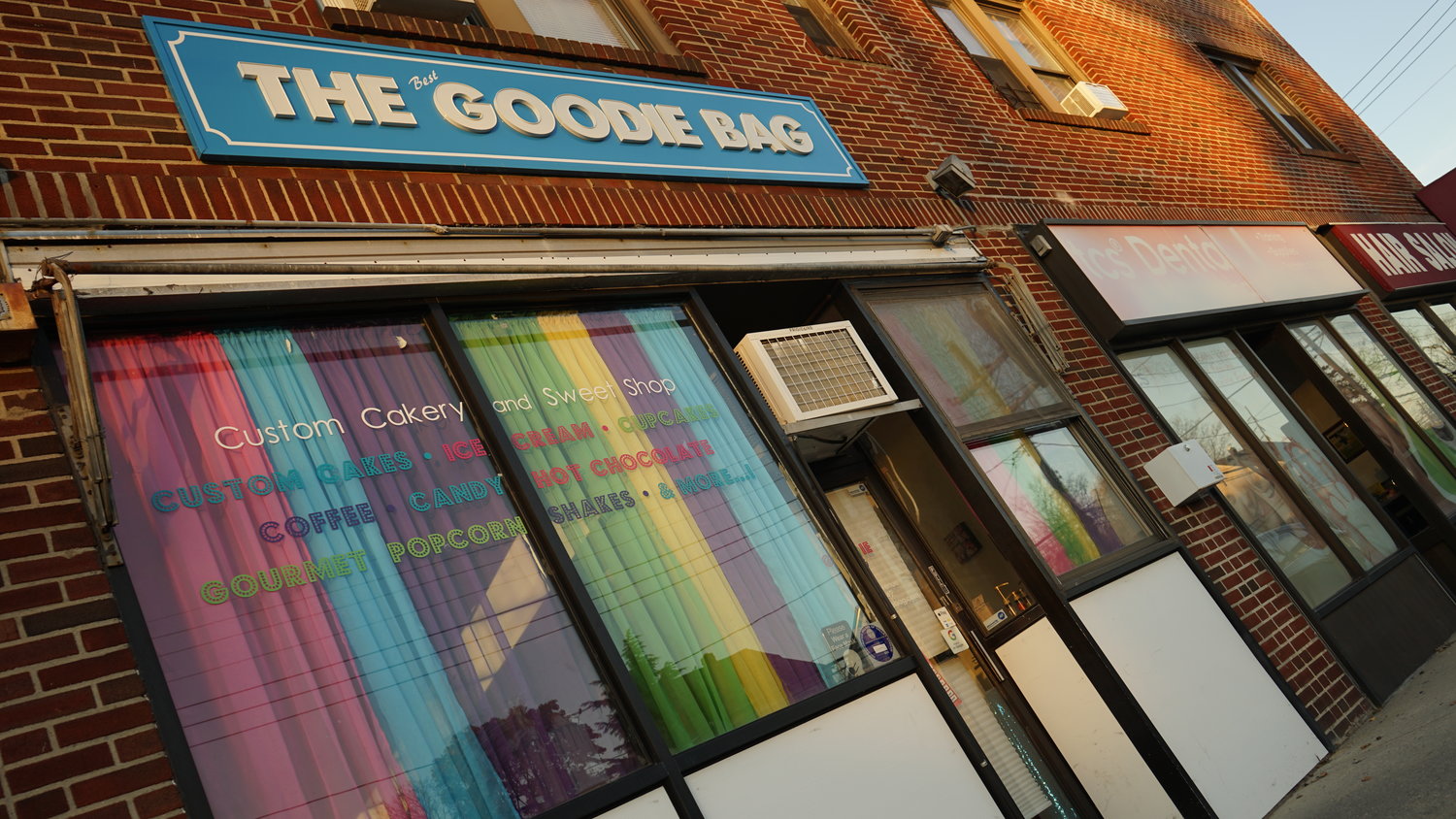 It took its owners two years to find and open their shop on Roosevelt Avenue, after taking the unexpected step of becoming professional bakers. This past Halloween they celebrated two years in business.
Peter Belfiore/Herald 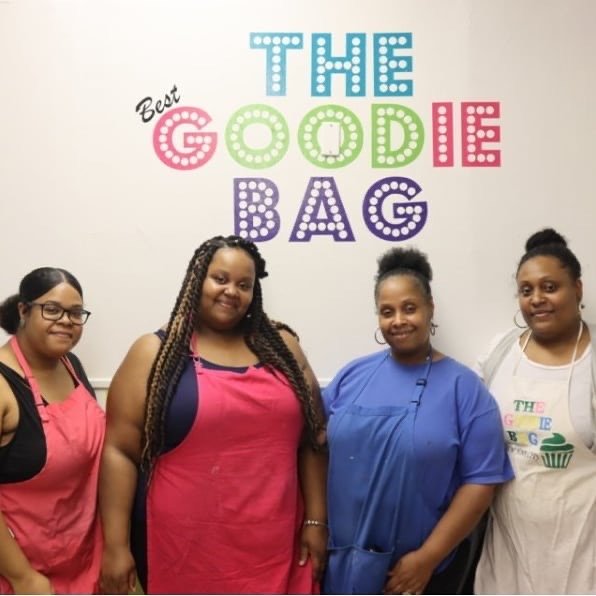 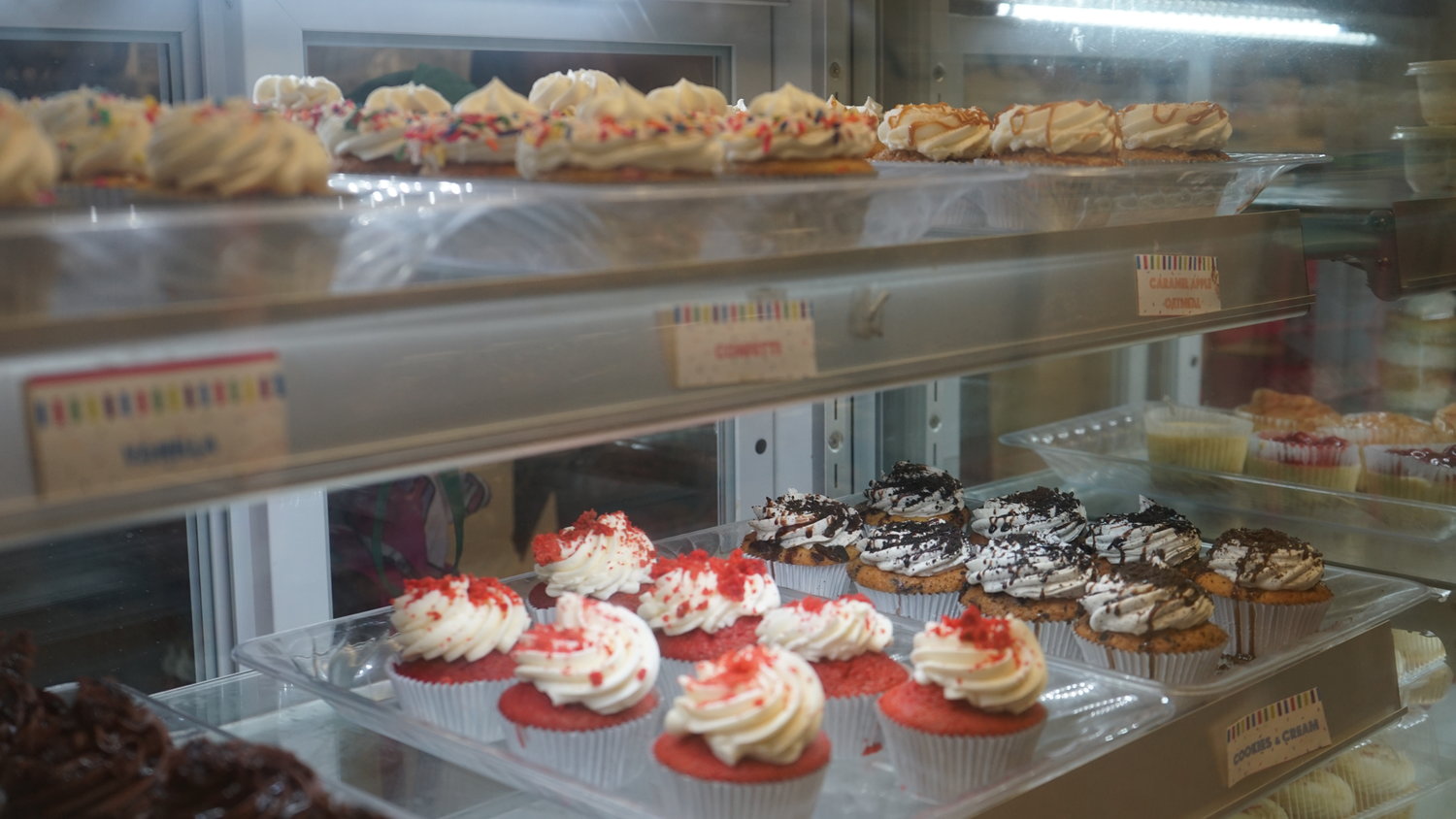 In addition to cakes, the shop provides a variety of sweets.
Peter Belfiore/Herald 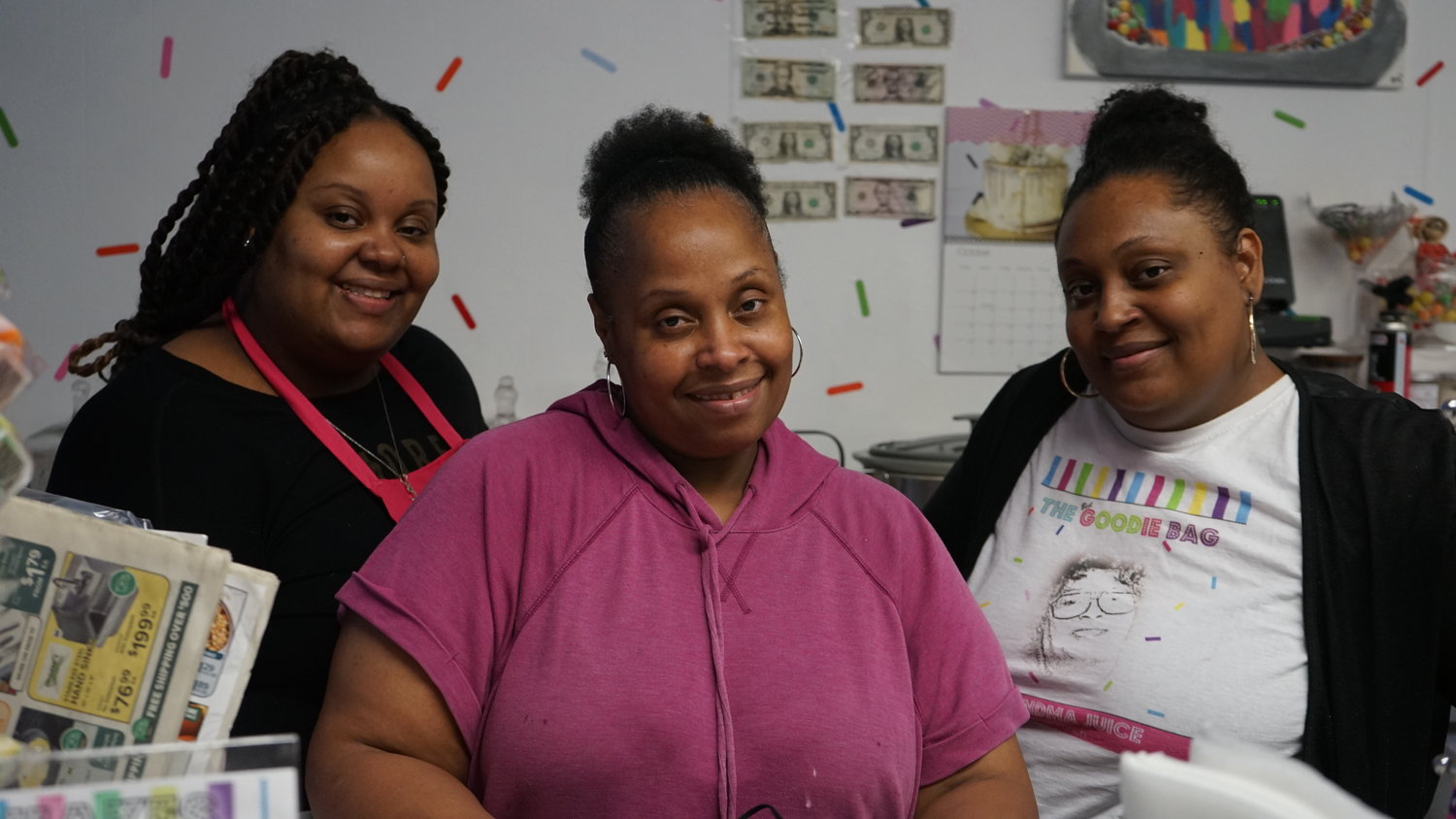 Edwards and Abrams, a mother-daughter duo, appeared in the 2020 Christmas season of "Sugar Rush"
Peter Belfiore/Herald
Previous Next
By Peter Belfiore

The story of The Best Goodie Bag bake shop in Valley Stream is one of the unexpected. It started with a birthday party for grandma.

Justine Campbell was turning 84 in 2008. She was the gregarious type, with nine children, the youngest of whom, Darlene Edwards, wanted to throw a party for her with plenty of sweets. Campbell also had nearly two-dozen grandchildren and many great-grandchildren, and Edwards wanted them at the celebration.

“She was the type of grandmother who wanted to have all of her grandkids around her,” her daughter recalled.

But Edwards, now 56, wasn’t a baker back then. In fact, she was a soon-to-retire New York City police sergeant who had only recently moved to Valley Stream. So, to pull off it off, she recruited her daughters, Eleesa Abrams and Dale Campbell, and niece Caprice Campbell, and together they threw a carnival-themed extravaganza. The feedback from attendees was overwhelmingly positive.

“That’s where we started,” recounted Darlene, who through word of mouth started taking requests to furnish parties with cakes, cookies and other baked goods. Eventually, those requests morphed into a part-time baking business run out of the kitchen of her Adeline Place home, and from there, the venture would became a shop.

Now, in a recent, and yet another unexpected turn, Darlene and Abrams are set to appear in the second Christmas special of the Netflix reality competition show “Sugar Rush,” now in its fourth season. The season will air Nov. 27.

“Sugar Rush” pits four teams of two contestants per episode against each other in timed baking challenges for a $10,000 prize. Three judges, including a celebrity guest judge, rate the bakers’ creations, and the challenges are broken into three segments: cupcakes, confections and cakes.

A few years after that initial party, Edwards began running out of room in her home, and when Caprice, now 36, lost her job at Time Warner Cable in 2016 the family took it as a sign to open up their own shop. So, Edwards, along with Caprice and Abrams took a business course at Hofstra University and searched for a place to call their own. In 2018 they opened their shop, The Best Goodie Bag, on Roosevelt Avenue.

It took two years to settle on a storefront and ready it for business, Abrams, 34, said. It celebrated its second anniversary on Halloween.

The “Sugar Rush” producers had reached out to the shop’s owners through social media, and filming for the segment with Edwards and Abrams took place over four days in February, they said. The two were flown to Los Angeles for the competition, while Dale and Campbell tended to the shop.

The two described a long competition day filled with stress, as the two self-taught bakers went up against teams of classically trained contestants. The three remaining days of filming were reserved for interviews.

“We thought we worked well under pressure,” Edwards said.

“But not that kind of pressure,” Abrams joked, adding that at one point early in filming, she thought she had broken a toe. While they were coy about how they fared in the competition, they did promise some potentially entertaining drama.

In the days leading up to the episode’s airing, Edwards and company were working on another, yet unannounced and unrelated project. Although a secret, as part of it, nearly every available space in their shop was temporarily filled with brown cardboard boxes. Inside were cookie-making kits.

The group had pulled a few all-nighters working on the project, but speaking quickly with her eyes wide open, Edwards was clearly excited.

As if to highlight their fortuitous trajectory, she remarked that aside from Dale, 24, who earned an associate’s degree in culinary arts from upstate SUNY Delhi in 2014, none of them has a formal background in baking. Abrams works as an NYPD dispatcher, and Campbell has a degree in accounting.

“I used to use Duncan Hines boxes,” Darlene joked, referring to the pre-made cake mixes found in the grocery store.

“Now we make everything from scratch,” Abrams noted.

As the two worked to assemble the kits, Campbell sat behind the counter, ensconced in a small plexiglass enclosure as she carefully piped butter cream roses onto a custom rosette cake.

She and Abrams handle decorating, while Edwards takes care of the baking, they explained. Nearly all of it has been self-taught through a combination of trial and error and research. “Google is our friend,” Abrams remarked, with Dale providing expert input from her studies.

Their work continues to evolve every day, they said, as they strive to keep up with popular trends in the cake world and customer requests.

Recent ones include geode cakes — cakes decorated to look like rocks that have been split open to reveal colorful crystals inside — and drip cakes featuring melted toppings that spill down the sides. Others have been popularized by celebrities like Khloe Kardashian, who recently had a brown Teddy bear-themed cake made for a friend’s baby shower. Campbell said replicating some of these requires a bit of reverse engineering, recreating the cakes from photos without knowing exactly how they were made.

They also offer personal spins on classics, with rosette cakes that they refer to as “flower boucakes,” Campbell said, and customers can make custom requests.

Edwards said they have been fortunate to remain busy during the coronavirus pandemic. They, like many businesses, were forced to close for nearly three months at the start of the crisis, but she said, they have been able to sustain themselves since.

While Justine is no longer with them — she died in January at age 95 — her legacy remains. She was resourceful, Edwards said, pointing to a chalkboard menu hung in the shop. Edwards repurposed it from a slab of wood found in her garage. She said it reminded her of her mother.