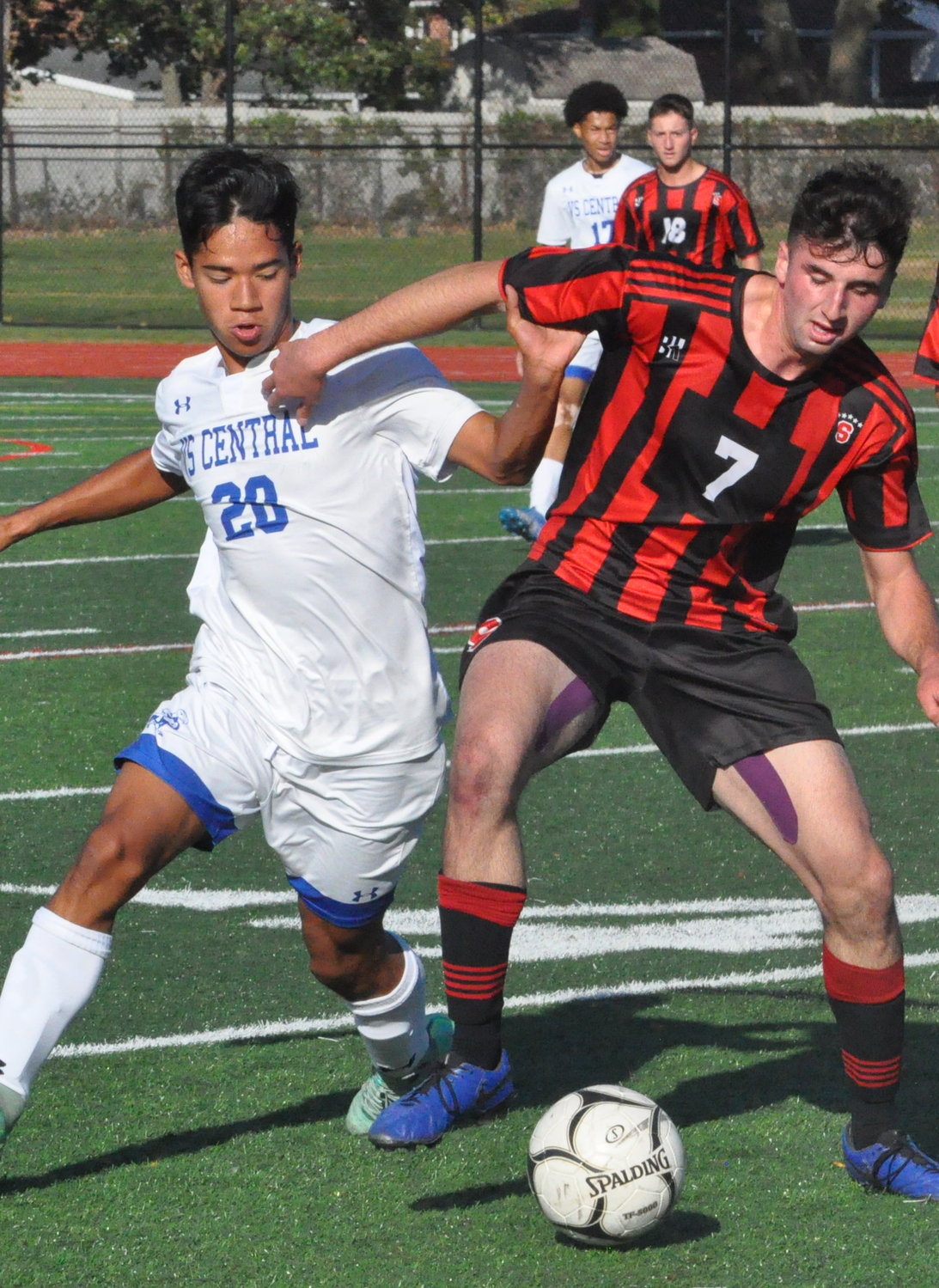 Digging a two-goal hole in the first 20 minutes against a Syosset side which allowed just five goals in 14 regular-season matches didn’t bode well for Valley Stream Central in the only Nassau Class AA boys’ soccer outbracket game Oct. 21.
However, the Eagles stayed within striking distance thanks to junior goalkeeper Jonas Mata and pressed to get the equalizer late but ultimately suffered a season-ending 2-1 defeat. Spencer Lieberman scored both goals for the eighth-seeded Braves (6-3-6), who advance to face No. 1 Baldwin in the quarterfinals.
“I told our guys at halftime we all had Jonas to thank for only being down 2-0, because he made two incredible diving saves,” Valley Stream Central coach Billy Miller said. “He kept us close enough and gave us a chance for the comeback. Everyone kept their spirits up and we played so much better in the second half. I felt like we had another goal coming after we got the first, but Syosset hung on.”
The Eagles (4-4-7), one of only five teams to solve Syosset goalkeeper Cole Nevins during the regular season with a goal from junior Fortune Uzo in a 1-1 draw on Sept. 25, were outplayed in the first half of the rematch as Lieberman scored 9:20 into the contest and again 11 minutes later.
“We came out strong in the first five minutes and created a few scoring chances, but then they started to control things,” Miller explained. “They had the wind and we were caught chasing the ball at times. It wasn’t the start we wanted but the kids never stopped working.”


As a defense led by seniors Luke Scarangella, Jordan Matthews, Tyler Tessoriere and Allan Conway, along with juniors Jean Daryl Derineau and Nasir Bodden, clamped down on Lieberman & Co., the Eagles began to generate some scoring chances and had three corner kicks in the second half after none in the opening 40 minutes.
On what would be Central’s second corner, Conway nailed the crossbar with just under 18 minutes to go. With the ball still inside the 30, the offense finally broke through when senior Logan Barbot cut Syosset’s lead in half with 17:20 left.
“It definitely hurts we couldn’t get even,” Miller said. “We knew this was going to be a well-played defensive effort on Syosset’s part. At 2-0, it wasn’t looking good but our guys really fought in the second half. They left it all out there.”
Central, which got 10 saves from Mata, settled for the most draws of any team in Nassau and had a stretch of four consecutive deadlocks from Sept. 14-25. The regular-season finale against Herricks ended 1-1 as Uzo (team-high 9 goals and 16 points) set up senior Olurotimi Sofola for the Eagles’ goal.
“I told the guys to keep their heads held high,” Miller said. “We wanted to see a little better results, maybe some of the ties could’ve been wins, but we competed against the top teams and had success. It was a season to be proud of.”