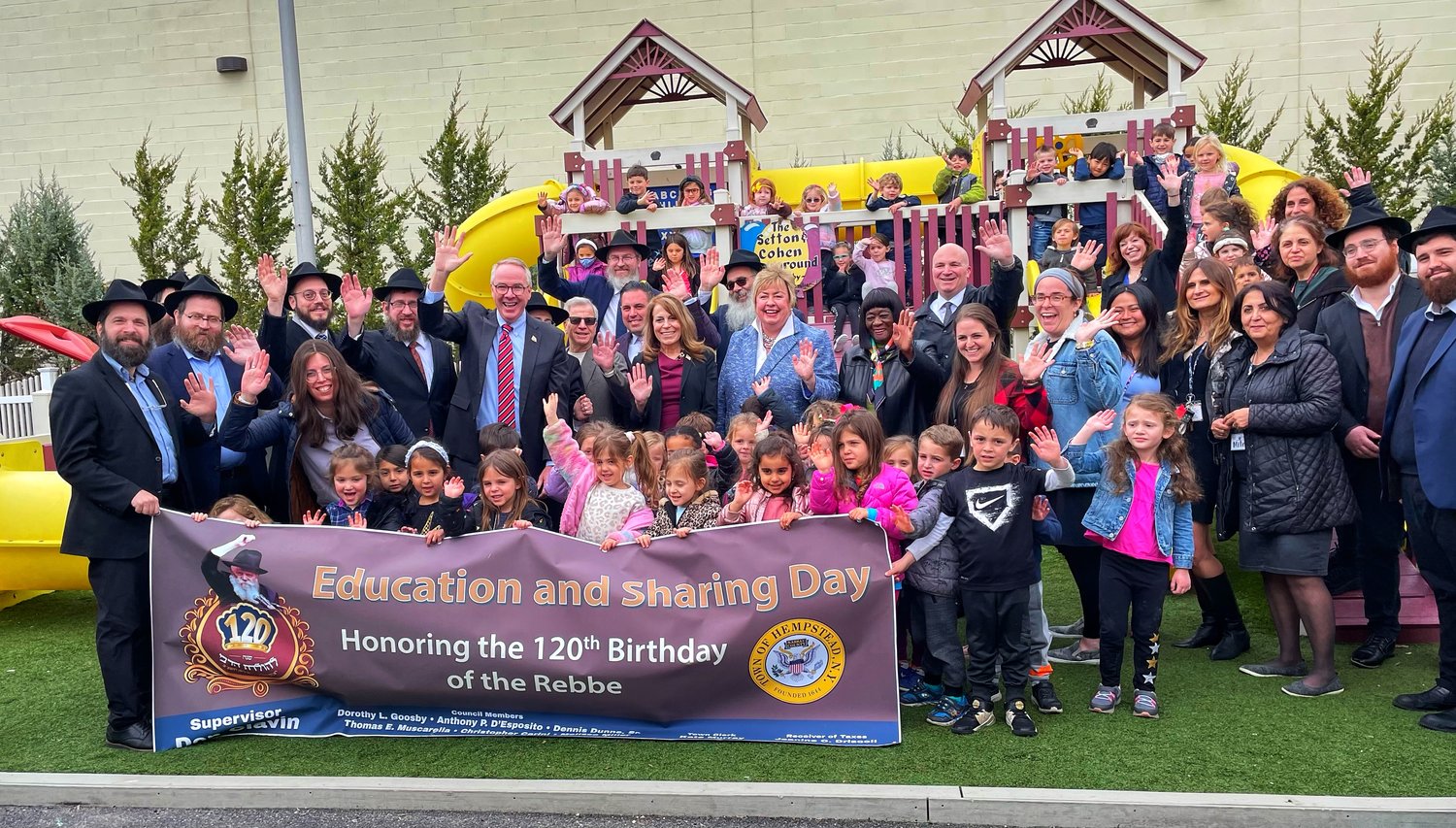 It was a community affair in Merrick last week when Town of Hempstead officials and Chabad rabbis from across Nassau County gathered to honor Rabbi Menachem Mendel Schneerson on what would have been his 120th birthday.
Jordan Vallone/Herald 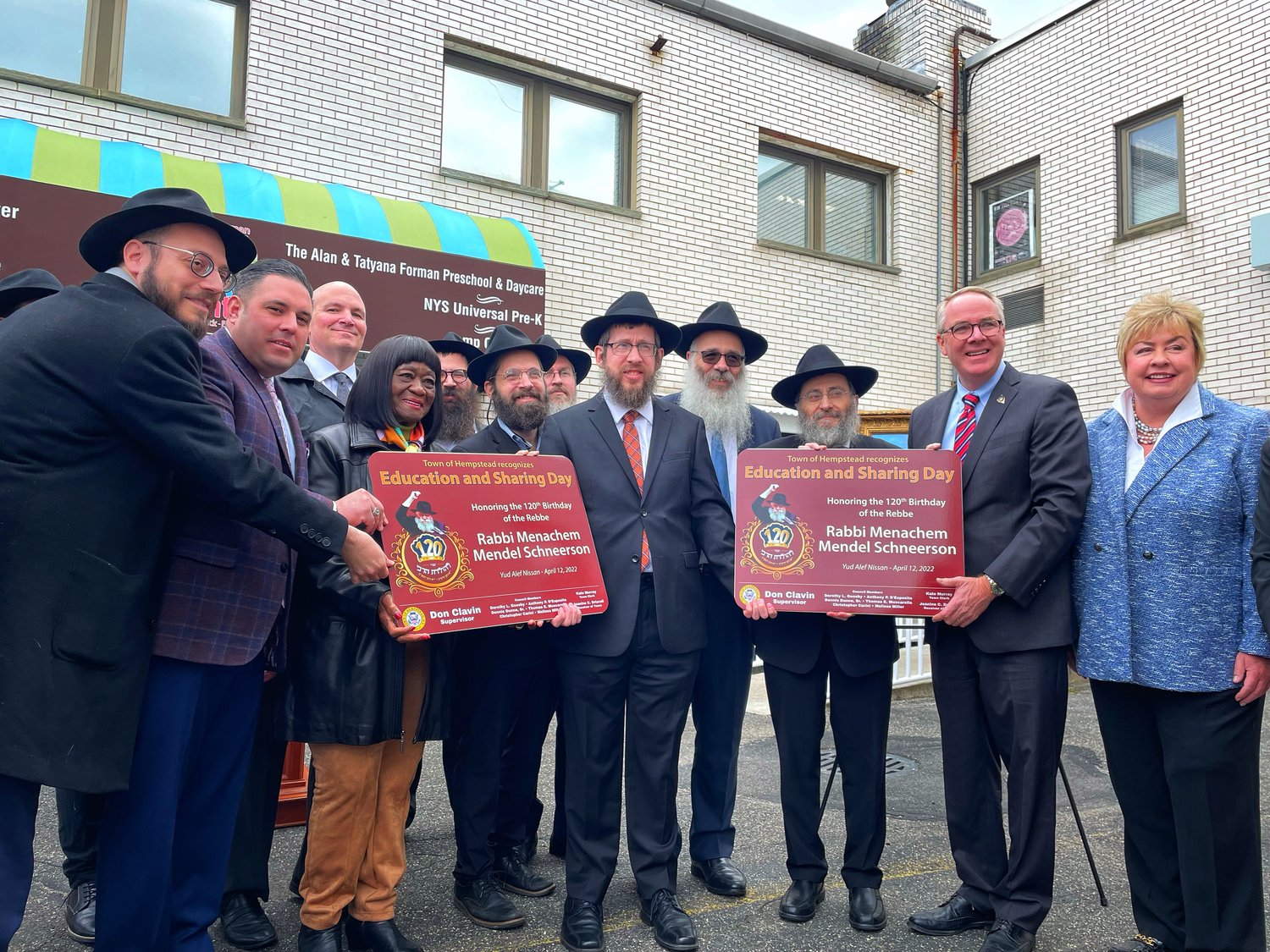 Each Chabad in the Town of Hempstead was given a commemorative sign. Chabad centers are known for their community outreach and welcoming facilities to people of all religions and backgrounds.
Jordan Vallone/Herald 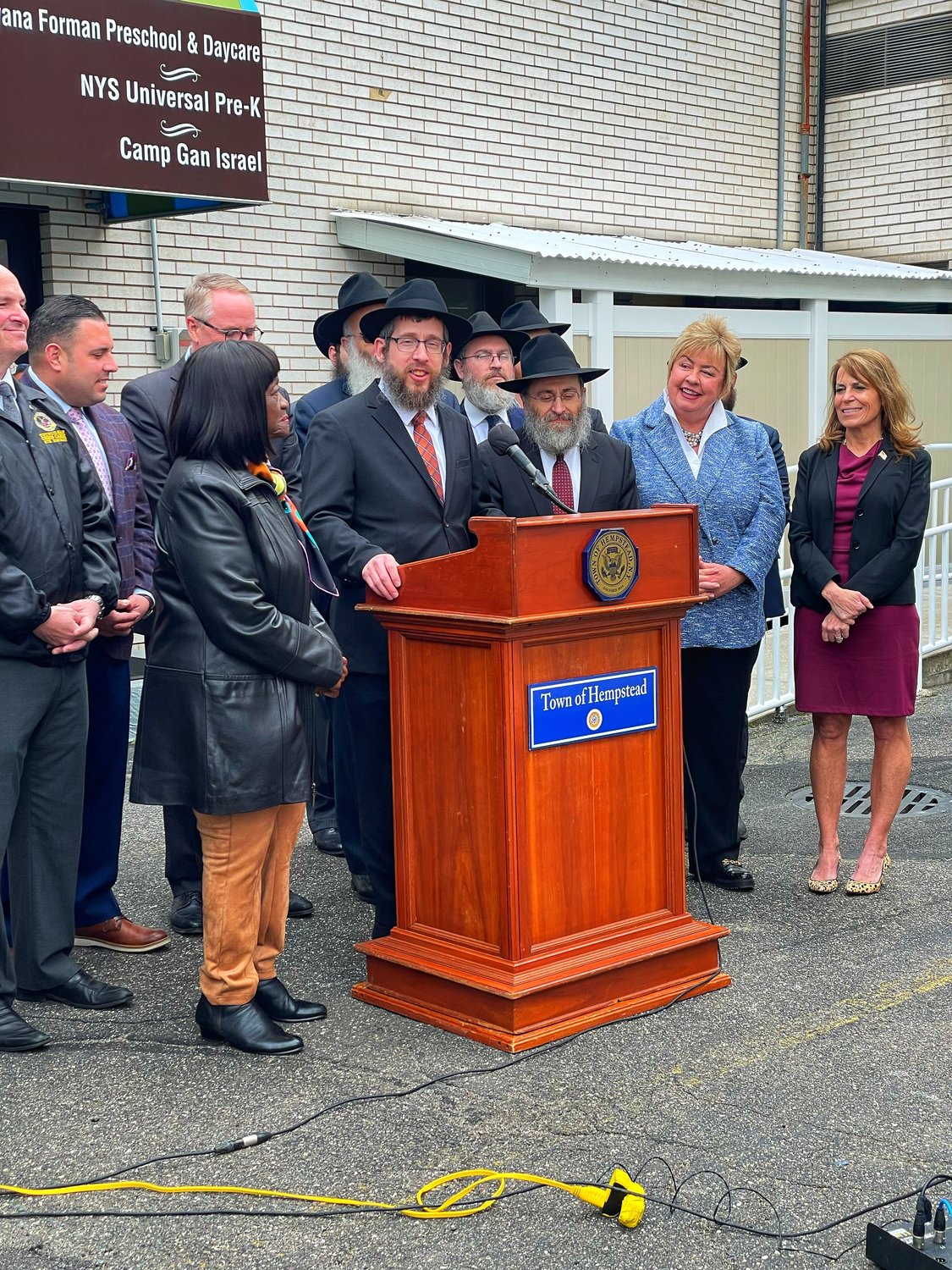 Rabbi Shimon Kramer, of the Chabad of Merrick-Bellmore-Wantagh, shared what he had learned from the rebbe on the occasion of his 120th birthday.
Jordan Vallone/Herald
Previous Next
By Jordan Vallone

They gathered to commemorate what would have been an influential rebbe’s 120th birthday.

Town of Hempstead officials and rabbis from across Nassau County got together at the Chabad Center for Jewish Life in Merrick last week to honor the late Rabbi Menachem Mendel Schneerson.

He was a leader of the Chabad-Lubavitch movement, becoming its seventh rebbe in 1951. Schneerson transformed the Chabad into one of the most widespread Jewish movements, establishing a large network of institutions across the world to serve religious, social and humanitarian needs in the community. In fact, many of these Chabad centers can be found throughout Nassau.

Congress has recognized Education and Sharing Day every year since 1978 to honor the late rebbe. Because the date it falls can vary on the Gregorian calendar, it usually occurs between late March and late April.

“The rebbe’s legacy — for anybody that is standing beside me — is tremendous,” Town Supervisor Don Clavin said. “At a time when we’re seeing people’s faith attacked for who they are — or just for being of the Jewish faith — it’s important that we remember the rebbe’s teaching.”

The Town of Hempstead has one of the largest Jewish populations in the United States, Clavin noted, comparable to the size of Jewish communities in New York City.

“His work was essential to the expansion of the Chabad dynasty throughout the world,” Clavin added. There are now more than 5,000 Chabad centers worldwide.

“They are carrying on the legacy of the rebbe’s teaching and education to the next generation,” Clavin said.

Town Councilman Anthony D’Esposito, whose district includes parts of the Five Towns where there is a particularly large Jewish population, said Chabads welcome people regardless of their religion to see the world through different glasses.

Kramer, whose Chabad center hosted the ceremony, recounted some of the lessons he had learned from Schneerson. In fact, Kramer said, 40 years ago, he received a Tanya — a holy book that teaches human selflessness — from the rabbi.

“That’s what the rebbe was,” Kramer said. “Always selfless. He was always there for everybody else. I am honored to stand here, with my colleagues — and all of the officials of the town council — to honor the rebbe with what he stood for: education.”

“The rebbe taught that education in general should not be limited to the acquisition of knowledge,” Pearl said. “Instead, the education system must pay more attention to the building of character, with emphasis on moral and ethical values.”

Each Chabad in Hempstead, Clavin said, would receive a commemorative sign in honor of the rebbe and his legacy.

“It really is something about education,” the town supervisor said. “That is why we are so honored to join with you, in honor of the rebbe’s 120th birthday. We want to thank you for the work that you do for the children, the adults, and for everybody in all of your communities.”