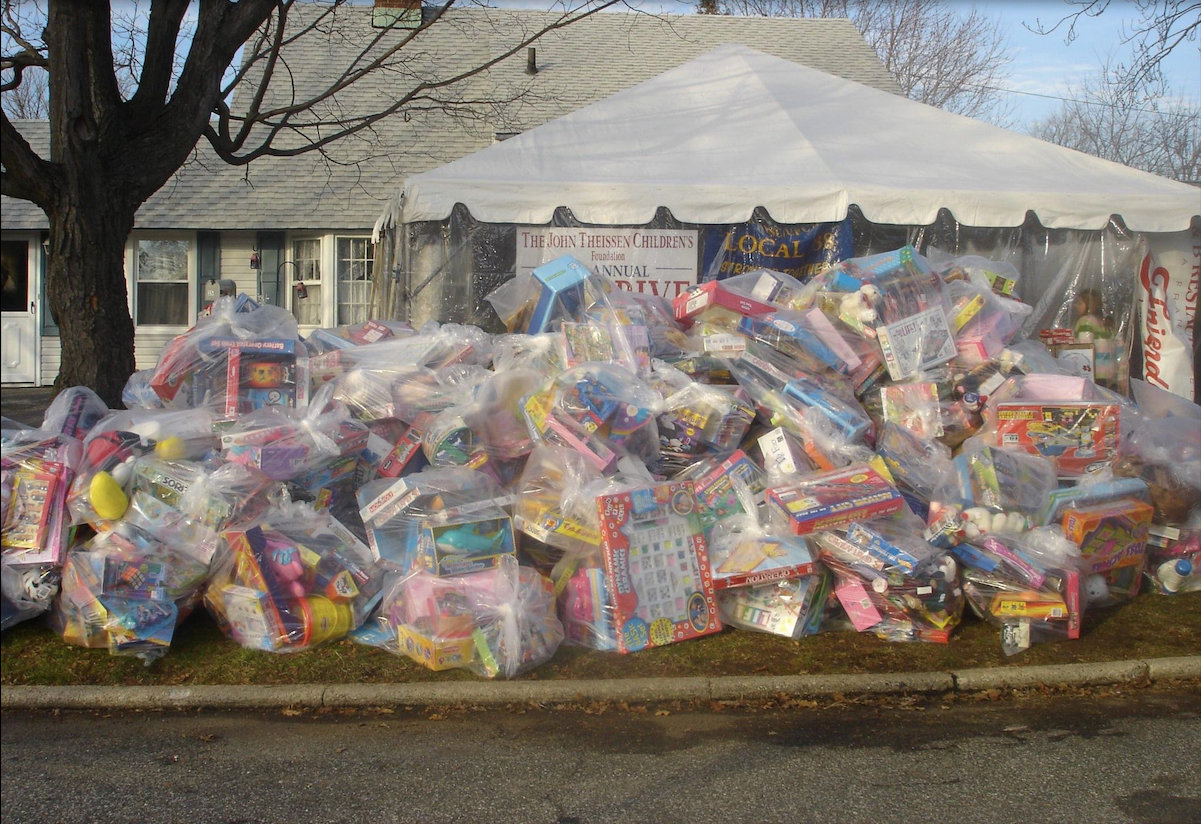 The John Theissen Children’s Foundation has collected over 50,000 gifts since its beginning 30 years ago.
Courtesy John Theissen
By Mallory Wilson

Last year, John Theissen – the founder of the John Theissen Children’s Foundation in Wantagh – lost two individuals who were instrumental in his life: his mother, Roberta Theissen, and best friend, Anthony Mariano.

Roberta died September 2020, and two months later, Mariano died after he was killed by a drunk driver.  “My mom was everything to me,” John Theissen, of Wantagh, said. “And Anthony was here all the time in the early days, helping me out when no one else could.”

Every year, the John Theissen Children’s Foundation hosts a toy drive for underprivileged children across Long Island during the holiday season. This year’s drive – which kicked off Nov. 8 – will be conducted in honor of Roberta and Anthony.

The 30th Annual Toy & Fund Holiday Drive, organized by the foundation, will this year run through Dec. 23.

The foundation has distributed over 80,000 gifts since the creation of the drive, Theissen said.

The organization works with social workers and caseworkers from school districts and agencies to identify families and children in need.

“Schools, social workers, hospitals and shelters call us and they let us know what they’re looking for whether its two families or three hundred toys and we match everything up in the office,” Theissen explained. “The requests come from all over Long Island.”

The foundation also receives monetary donations which are utilized for children’s needs. “Sometimes when we get a family, the kids don’t even want toys,” Theissen said. “They want winter coats instead, so we’ll go out and buy that.”

The foundation has volunteers that help separate the toys by age categories and prepare them for distribution. Social workers and families come and pick up their backpacks at the Family Fun Center in Wantagh.

Carolyn Rochel, leader of Girl Scout Troop 3364 from Wantagh and Seaford, said that her troops – who are currently high school seniors - have volunteered with the drive for nearly four years.

“They really love John and volunteering for the foundation,” Rochel said. “They love separating the toys and filling the wishlists for children.”

The toy drive has humble beginnings. It was started on Roberta’s front lawn on Deep Lane in Wantagh, after John was diagnosed with a brain tumor at 17. John decided that he wanted to start a toy drive after being in the hospital and meeting a seven-year-old girl, Tasha.

Tasha was always in his room, he recalled, and when Christmas came around and all of the children had the opportunity to visit with Santa and receive a present, Tasha had no family members to go with her. Theissen’s mother offered to take Tasha, but she was upset that John couldn’t visit with her, as he had just had major brain surgery.

“I don’t know why she took to me so much,” Theissen said. “She was like my angel.”

When Tasha met Santa later that day and was offered a stuffed teddy bear, she allegedly told Santa that she didn’t wanted to give the bear to her friend, John, to make him feel better.

“When I walked out of the hospital I vowed that I would be back to help out kids like that,” Theissen said. “I started the simple toy drive a few years later and I still have the first flyer that I typed up on my typewriter.”

The first toy drive was a success, in part because of Roberta: to obtain donations, she handwrote letters to companies. The first drive brought in about 800 gifts.

Theissen said he’s learned a lot over the past 30 years doing the drive. Most of all, he’s learned not to take anything for granted.

“I still take 10 meds a day, but I am lucky. Seeing what families go through when a child gets sick and seeing how much pressure it puts on the whole entire family, it’s crazy,” Theissen said. “Never judge anyone because you don’t know what they’re going through.”

The annual toy drive isn’t the only thing that the foundation does during the holidays. The organization will also host a holiday gala on Dec. 2 at Mulcahy’s in Wantagh. The night will include food, drinks, special guests, raffles, music and more. This year special guests include Bobby Nystrom and Clark Gillies from the New York Islanders, Goose Gossage from the New York Yankees and Roger and JP from WBAB radio.

Mulcahy’s owner John Murray and Theissen have a long history: Murray was one of the first people to donate to the foundation all those years ago.

John is just such a genuine person,” Murray said. “He leads with his heart and our collaboration was a natural fit.”

Theissen said he’s always hosted the holiday gala at Mulcahy’s, and he wouldn’t have it any other way. “Murray has always been one of my biggest supporters,” Theissen said. “He was one of the first to take a chance on me and since then he’s been such an avid supporter. Mulcahy’s is like my second home.”