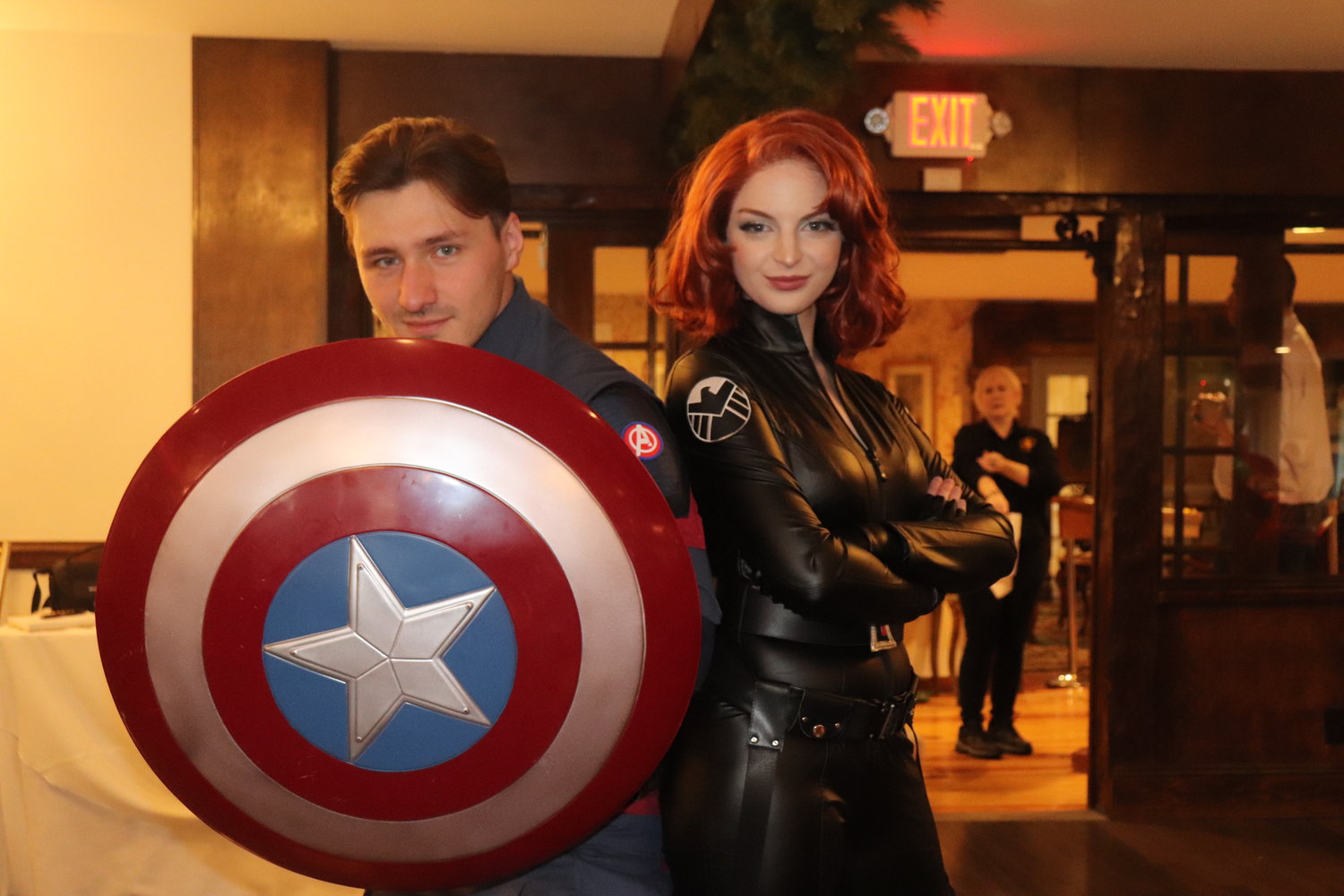 Captain America and Black Widow made an appearance at the Milleridge Inn.
Maria Cestero/ Herald 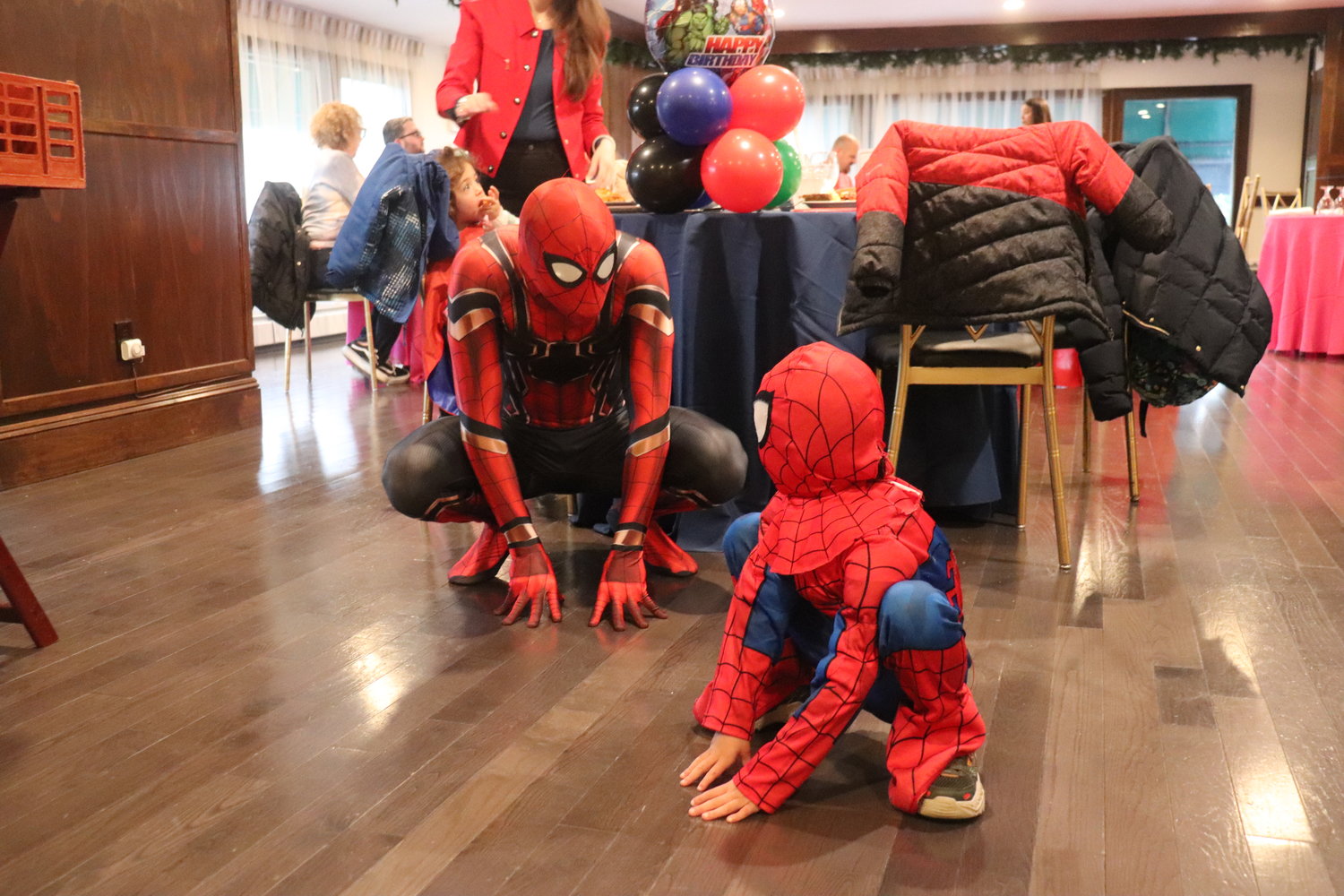 Spider-Man finds a new apprentice at the Milleridge Inn.
Maria Cestero/Herald
Previous Next
By Maria Cestero

Parents and their children recently were enjoying a brunch at the Milleridge Inn when one of Marvel’s Agents of SHIELD delivered an important message. The agent read a notice from Stark Industries, informing guests that Marvel superheroes were on their way to the location.

Children excitedly chattered and jumped for joy when the agent for the fictional Strategic Homeland Intervention, Enforcement and Logistics Division announced the arrival of Black Widow, Captain America and Spider-Man as they entered the dining area. Parents captured special moments of their children chatting with the Marvel Avengers.

Jordan Ashley Coene, 20, of Wantagh, owner of Once Upon a Daydream Parties —and a cosplay artist — organized the “Superhero Brunch.” Despite the Marvel theme, Coene’s favorite cosplays — or costume play — are Disney princesses.

The event was one of many organized by Coene through her cosplay company. With more than 50 costumes in her storage at home and some 20 cast members, Coene said she is excited that her business is prospering in the short time it has been open.

Coene started the cosplay business in August 2020, during the coronavirus pandemic. Her company recently celebrated its one-year anniversary in January. A Long Island University Post student herself, Coene brought her fellow friends and classmates to work as actors for her cosplay catering business.

“It’s crazy balancing school and work and auditioning for other things outside of this,” Coene said. “It’s a lot to handle but it’s my passion so much as it is stressful, like any other job at times. It really is my passion, and I feel like that makes it all better.”

Coene grew up wanting to be a real princess, ever since she was a child. She was known, she said, for only wearing dresses to school, even in the cold.

“I grew up wanting to be a Disney princess,” said Coene. “It really wasn’t a surprise to anyone that I became a professional princess.”

Studying musical theater in college, Coene wanted to incorporate both her passion for acting and love of princesses and decided to “branch out” and open the business. Starting with her first cosplay as Disney’s Queen Elsa, the cosplay inventory has since expanded to include Pixar characters, as well as many Disney and Marvel characters.

“If I had been told when I was six by my favorite princess that I looked beautiful in my princess dress, my life would have been very, very different, I think,” said friend and actress, Hannah Johnson, 22. “It’s part of why I do it.”

Johnson attended LIU Post along with Coene and shared a love for acting. Dressed as an Agent of SHIELD, Johnson said she had been working with Coene since the start of the business.

“I love working with kids, they’re just so wholesome,” said Krebs. “When you have fun, the kids have fun.”

Krebs said he enjoyed working alongside his friends, stressing the importance of teamwork and bonding. He stated it was important to avoid any awkward moments because the children will take notice and the actors aspire to keep the magic alive for them.

The business’s employees all have acting talents, and some are even musically oriented and can sing and dance. Coene said she casts the cosplays based on their ability to act and if they look like the character.

Coene plans to keep her business local to the community but hopes to have a permanent space to host events someday.