Helping cancer patients, one Lidl grocery bag at a time 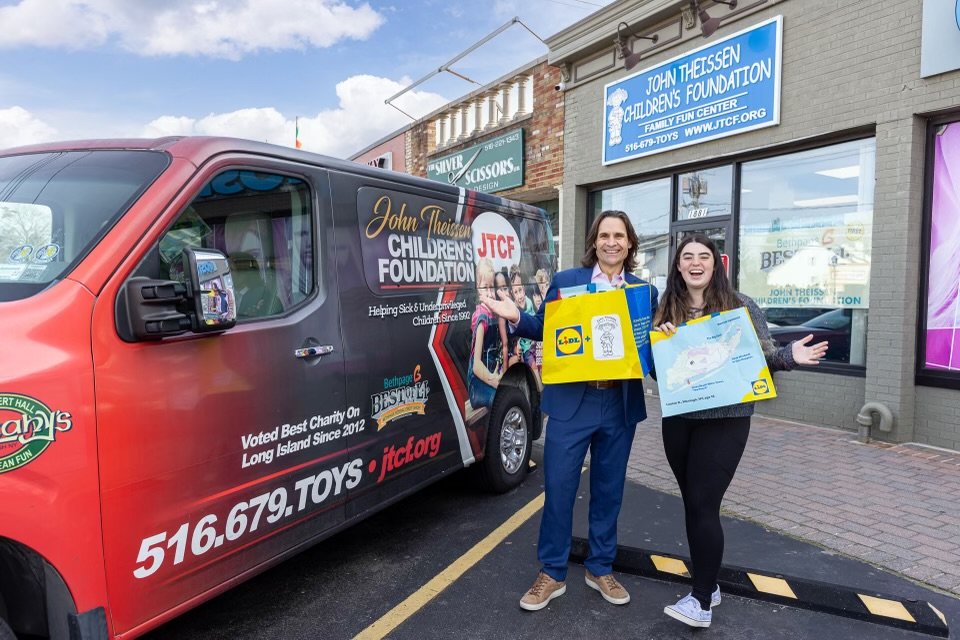 John Theissen recalled walking into Schneider’s Children’s Hospital in New Hyde Park on Dec. 8, 1988, to have surgery for a brain tumor. He was 17.

There he met Tasha, a 7-year-old girl Theissen would find himself spending time with at the hospital. Later that month, the hospital held a holiday party, at which Tasha met Santa. When asked what she wanted, she had an unexpected response.

She asked for a teddy bear for her friend John upstairs.

Theissen was touched. He realized then that when he got out of the hospital, he wanted to help children with illnesses, just like Tasha. Thirty-four years later, a child and a family he helped is returning the favor.

When Kaitlyn Rochel, of Wantagh, was 3, she was diagnosed with leukemia. Theissen and his charitable organization, the John Theissen Children’s Foundation, which is also Wantagh-based, was there to help. The foundation aided Kaitlyn and her family every step of the way, even throwing her numerous birthday parties.

“They’re a local Wantagh family,” Theissen said. “I always wanted to make sure Kaitlyn and the entire family was OK then and now.”

Kaitlyn is now 19, and cancer-free. Her sister, Lauren, 17, has been volunteering for the Theissen Foundation for seven years, helping with back-to-school Backpack Drives and the annual Wish Drive, a gift drive for the holidays. Lauren was recently asked to do something big for the foundation — design bags for Lidl, a grocery store chain, to be sold at all of its Long Island stores, with the proceeds benefiting the foundation.

“John helps out the community as much as he can,” Lauren said. “I’m really happy he reached out so I can help him this time.”

Lauren, who loves to draw and paint, looked back at some of her old paintings while thinking about designs for the bags. She said that Lidl was looking for a grocery bag that “represented Long Island.” It took her a while to figure out what she wanted to use as her design. Initially stumped, she eventually asked herself, what better to represent Long Island than the island itself?

The bag has Long Island as the background, and a fish in the foreground, which she took from a painting she did some years back. Alongside the fish and the island are landmarks she has seen, and others she wants to see. The Jones Beach water tower, the Old Hook Mill in East Hampton, the Big Duck in Flanders and the Montauk Point Lighthouse are featured on the bag. The other side sports the Lidl and Theissen Foundation logos.

Theissen and the Rochels have had a close relationship since Kaitlyn’s diagnosis. The family even surprised Theissen on television when he was appearing on Steve Harvey’s show “Harvey’s Heroes” in 2015.

Lauren said she planned to continue volunteering for Theissen in the future, perhaps with more bags, if needed. For his part, Theissen said, “This experience with the bags was a great opportunity to show everyone what we do. We’re a community foundation, and we belong in Wantagh.”