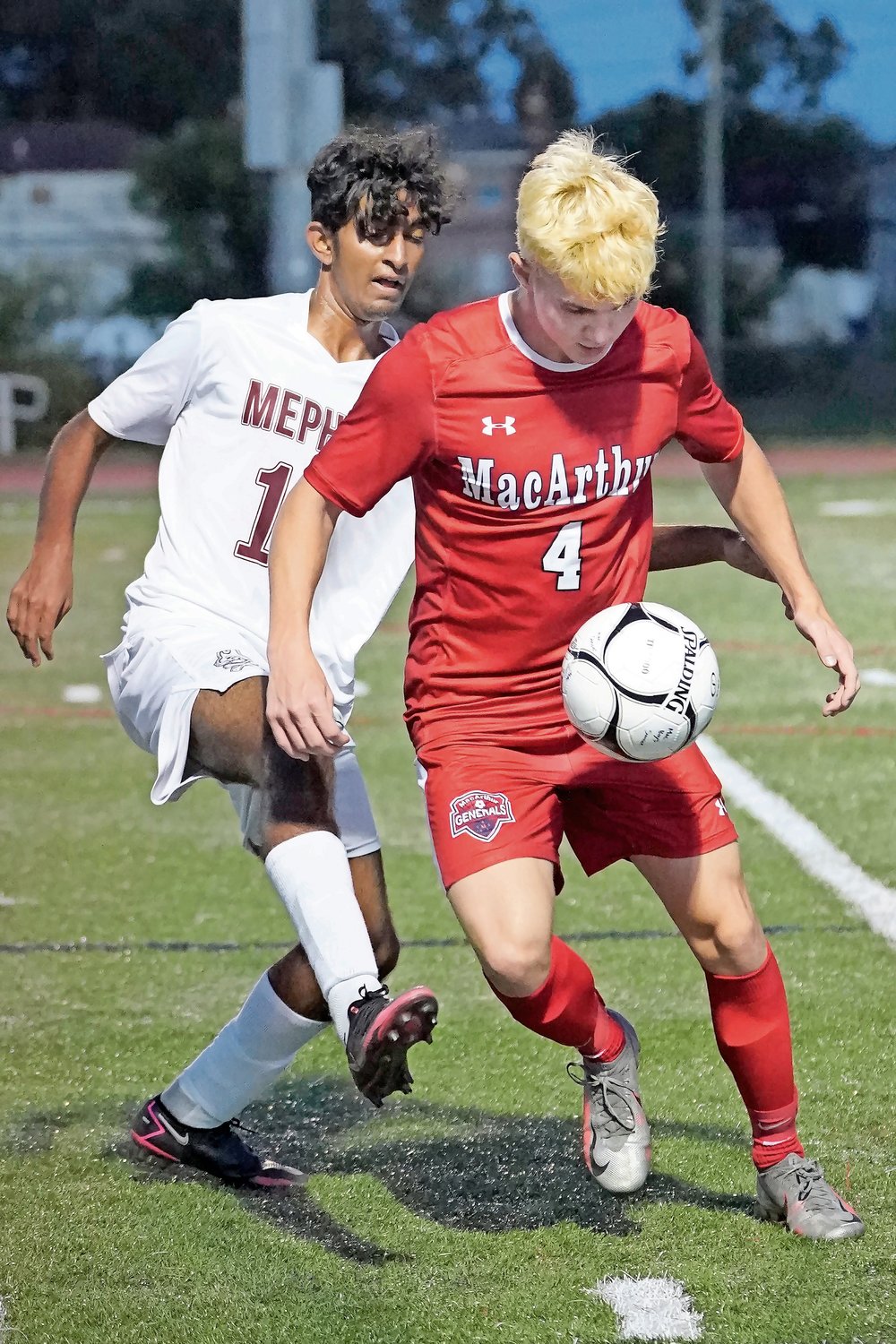 After a disappointing end to the spring season with a first round playoff exit, the MacArthur boys’ soccer team is fueled for a far deeper run this fall.
The Generals marched off to a 7-0-3 start entering the week on the heels of a 5-2-3 campaign that was played in the spring instead of fall 2020 due to the Covid-19 pandemic. A 2-0 loss to eventual county champion Great Neck North on April 20 marked the second straight season MacArthur was bounced in the opening round of the postseason and 10th-year coach Andy Atkins hopes his new youthful team is primed for a return to championship contention.
“We are one of five teams in Nassau County still undefeated and it is with a very young team with eight underclassmen starting,” said Atkins, who guided MacArthur to a county title in 2014 just two years after taking over a program that endured back-to-back winless seasons. “The kids are learning each game and hopefully we keep maturing through the final third of the season.”
MacArthur, which posted recent undefeated regular seasons in 2017 and 2019, kept its unbeaten streak alive this fall with a dramatic 1-0 home win against Great Neck North last Friday on a late goal by sophomore forward Christian Perez Franco with just 3.2 seconds left off a pass from Jason Tordy.
“We brought him up as a freshman in the spring, which I rarely do, which was a big learning experience,” Atkins said of Perez Franco, who is the team’s leading goal scorer with five. “This year we don’t really look at him as a sophomore as he is really an upperclassman and is definitely playing like it.”


The Great Neck North game was preceded by a 1-0 win at New Hyde Park on Sept. 27 in which Perez Franco scored the game’s lone goal in the first half. Junior goalie Tyler Behr registered three saves in one of his seven shutouts so far this season, which Atkins credits largely to the backline featuring sweeper Tyler Mormondo, stopper Joe Iannuzzi along with outside defenders Matt Cassidy, Gianni Ninno and Mike Powers.
MacArthur’s best offensive output came in a 5-1 victory at Great Neck South on Sept. 22 that featured five different scorers in Dylan Weber, Austin Roth, Joey Mahoney and Perez Franco and Tordy. Gianni Nino and Mike Powers also tallied assists in the convincing win.
“We are pretty well-rounded offensively,” said Atkins, who noted that Tordy, James Eden, Nick Delgrosso and Kieran Weber are also integral parts of the offense. “We have four guys with three or more goals and two more with two goals each so it is being spread out a little bit and you can’t key in on one guy.”
After a Monday match versus Great Neck South after Herald press time, MacArthur travels to Mepham Thursday for a 4:45 p.m. kickoff in a battle of Conference A1’s top two teams. The Generals then close the regular season at home on Oct. 12 against Long Beach at 6:30 p.m. and at Jericho two days later.