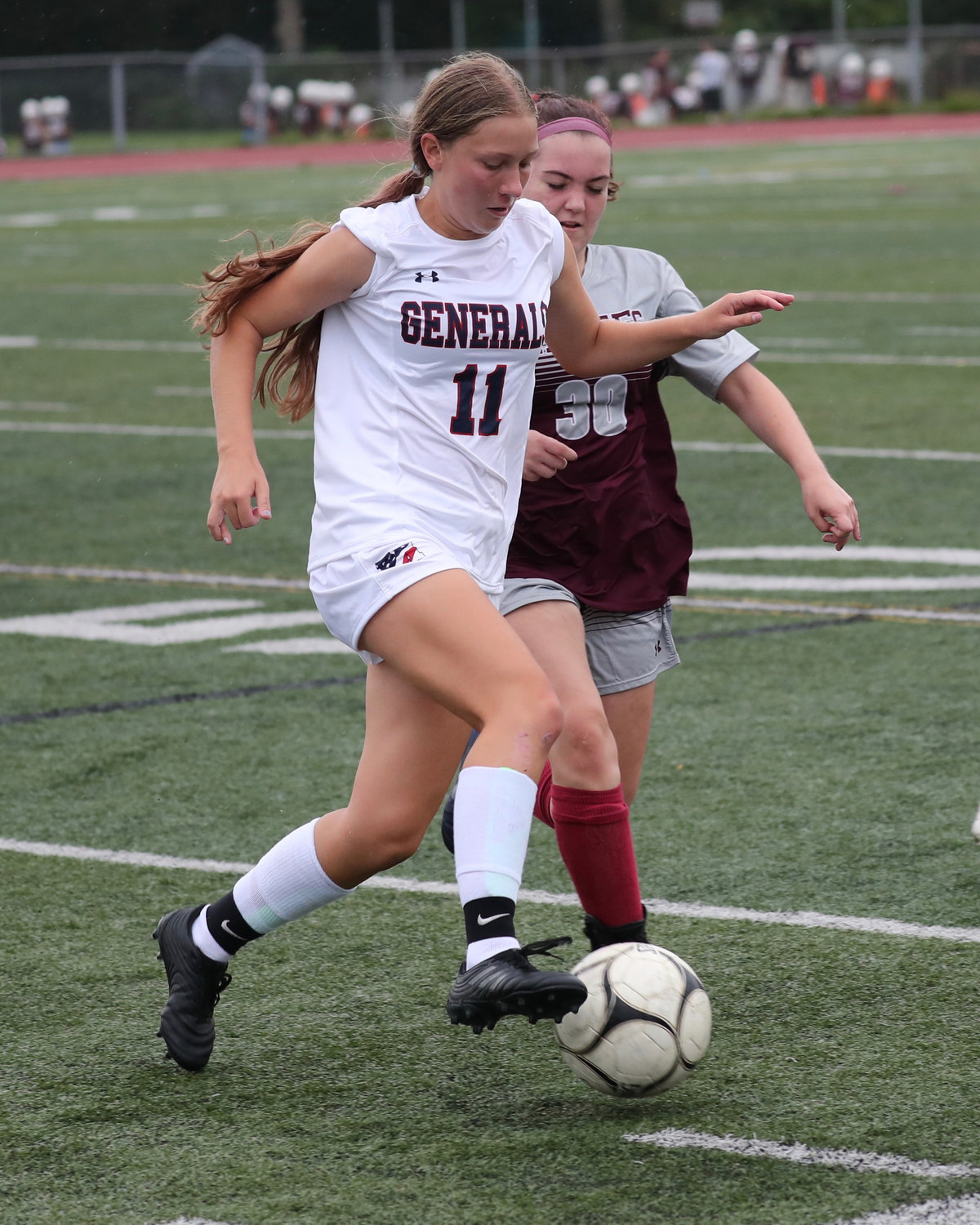 MacArthur's Fiona Kilian, left, worked against Mepham's Alexandra Rodriguez during the Conference A-1 opener for both teams Sept. 9.
Jeff Wilson/Herald
By Andrew Coen

The MacArthur girls' soccer team hopes an early season trip to an upstate New York tournament is bookended by a return journey culminating in a championship.
The Generals participated in the New York State High School Girls Soccer Hall of Fame Induction Ceremony and Tournament in Niskayuna, N.Y. last weekend featuring the state’s top teams. Sixth-year head coach Jamie San Filippo said the experience is designed to give his players a taste of competing on the big stage in a two-day span similar to what will be required to bring home a state title in November.
“It’s a good test playing some of the best teams in the beginning of the season and you hope to see them again at the end of the season, “ said San Filippo, who has brought his program to the prestigious event near Albany three of the past four seasons. “I always tell the girls if you want to win a state title you have to be able to win a game on a Saturday, sleep well Saturday night and come back and play in the final on Sunday.”
MacArthur returns nine starters from last season’s 13-1-2 campaign that was held in the spring due to the COVID-19 pandemic and ended with an overtime loss to South Side in the Class A finals. It denied the program a chance to repeat its 2019 county crown.
Senior forward Hailey Hnis is back for her final high school season after netting 24 goals in the spring. Junior Kaitlyn Tung will also be a big scoring presence near the net following an eight-goal sophomore season.


San Filippo stressed the depth and versatility of his midfield will be a key in helping push forward MacArthur’s goal for a deep postseason run. Senior Fiona Killian, a Xavier commit who is the reigning Conference AI Co-Player of the Year along with Hnis, anchors the unit with freshman Bella Calabro and sophomore Hailey Metzger.
The bulk of last year’s defense that only surrendered one goal in the regular season also returns, led by senior Madison Hnis, who will join her twin sister Hailey to play on the collegiate level at Albany next year. Sophomore Meghan Wetzel and junior Ava Anguilli are also big centerpieces of the backline in front of keeper Lexie Thompson, last year’s conference goalie of the year.
“She is a very special player,” said San Filippo of Thompson. “I wouldn’t be surprised to see Lexie be an All-State player before she graduates.
MacArthur opened the new season with a 2-1 win at Mepham last Thursday in which Calabro netted the game-winner off an assist from Summer Looney. The Generals are tackling a grueling schedule in Conference A1 highlighted by two matches against South Side starting Sept. 23 at Darcey Park in Rockville Centre at 4:45 p.m.
“What I have been pushing with these girls is this is a new season,” San Filippo said. “It’s a new group of girls and they are going to have their own philosophy, their own dynamic and make their own history.”