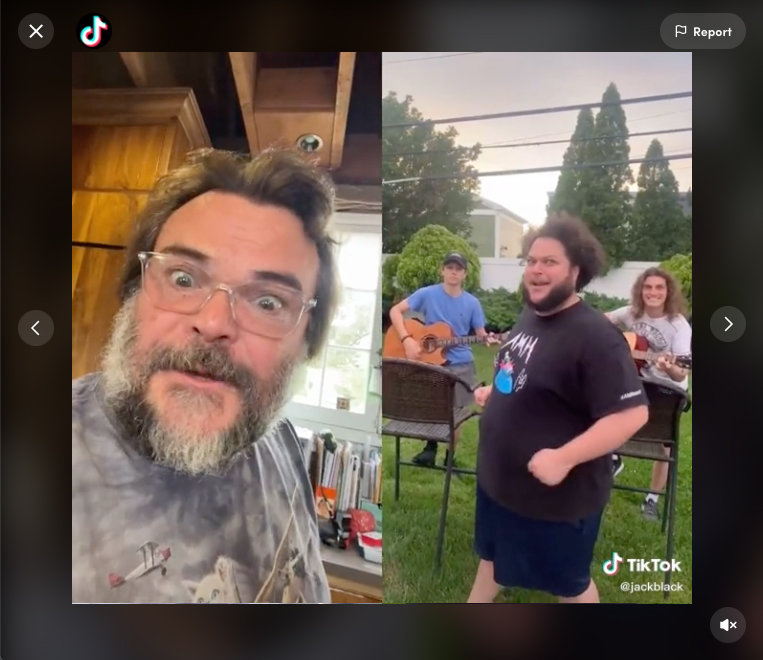 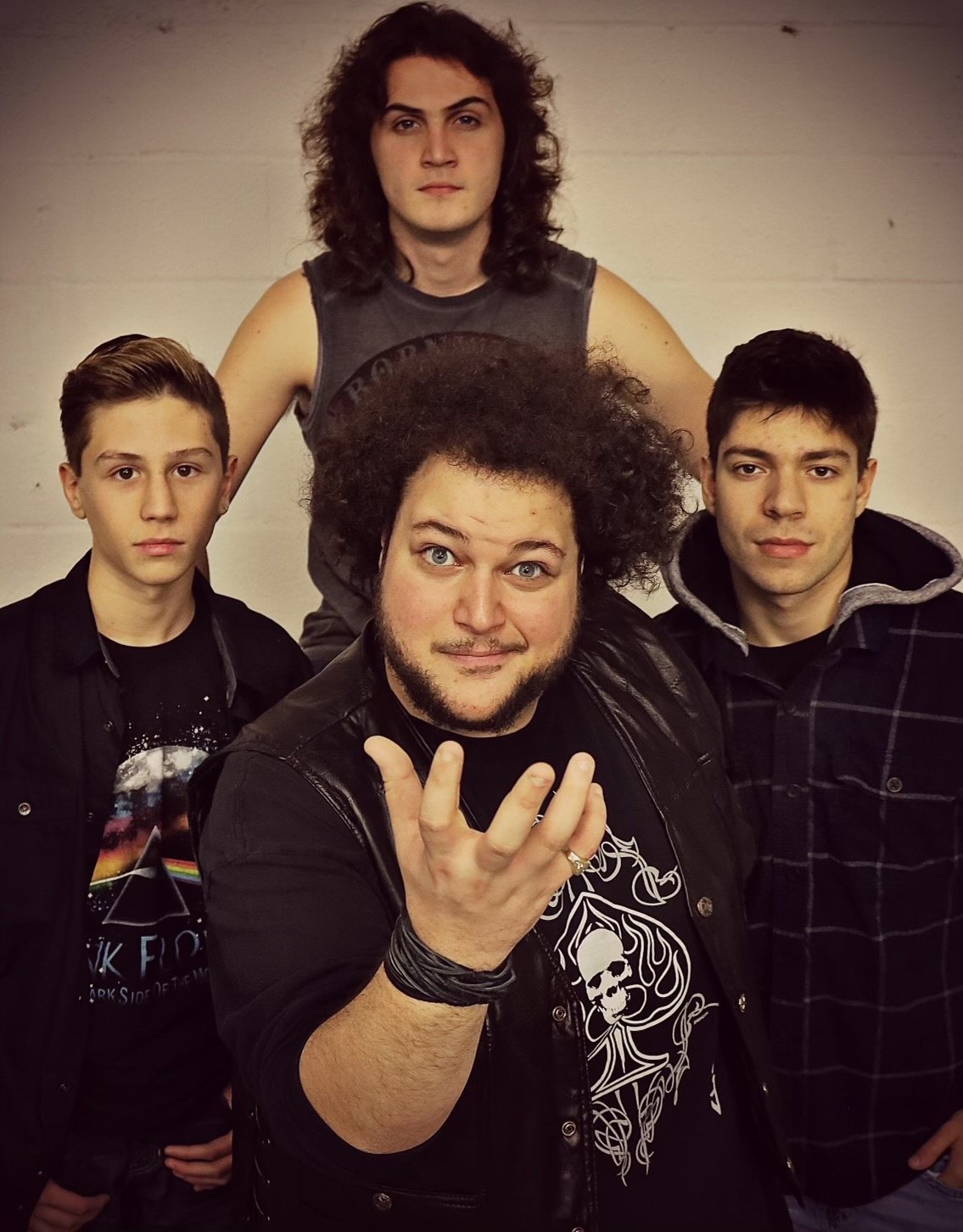 We’re just always trying to have fun in our videos. That’s why we have such a large following — they want that little piece of fun, that serotonin boost, in their day, and that’s where we come in.”
Lead singer Adam Ezegelian, of Wantagh
By Kate Nalepinski

In early May, South Shore-based rock band Adam and the Metal Hawks covered AC/DC’s “It’s a Long Way to the Top (If You Wanna Rock ’n’ Roll),” and posted the video to social media platform TikTok. At the time, the band had one main goal: to have actor and musician Jack Black — who covered the track in the film “School of Rock” — post a video reply on the app.

“We tried to incorporate either songs that he had covered or his songs,” lead singer Adam Ezegelian, of Wantagh, said, “and we worked them into different formats for our TikToks.”

Soon enough, a “public pressure campaign” was created on the app, as drummer Alex Hertler described it. The band’s social media following urged Black, the vocalist for Tenacious D, to post a video reply to it. “We went onto his most recent [TikTok] video, and every other comment was like, ‘duet@amhband right now,’” Hertler recalled with a laugh.

Adam and the Metal Hawks’ sixth video attempt at a response from Black, posted May 27, was a mash-up of TikTok viral track “Dick,” by Doja Cat and StarBoi3, and the Tenacious D song “Kickapoo.” Two days later, a video response from Black appeared on bassist/vocalist Ryan Daversa’s TikTok “For You Page,” a curated, algorithm-set series of videos on the platform.

“My dad was in the other room downstairs, so I went to him and showed him the video, and he looks at me and goes, ‘You did it!’” Daversa said. He proceeded to notify the band via text message.

Ezegelian said he tried to remain collected when he heard the news. “I feel like I’m always kind of reserved when it comes to my reactions,” he said. “It’s like, we got Jack Black, now we need to jam with them in real life.”

In the duet video, Black listens to AMH’s cover with a wide-eyed expression. Then he lip-syncs along to the track and tosses up the “rock on” symbol several times. Black captioned the video, “It’s time to pass the torch.”

The video went viral — as of July 9, it had over 64 million views, 12.9 million likes and 78,600 comments. It also boosted Adam and the Metal Hawks’ TikTok profile. But the group had already gained widespread popularity on social media, even before Black was involved. They’ve attracted over 2.5 million followers on the app since they established the account in January. They’ve garnered over 28.1 million video likes and, as of last week, are certified on Instagram with over 650,000 followers.

“Just to have this insane amount of followers … I’m just so thankful,” Daversa said. “When we had 2,000 across the globe, that was crazy enough to me. So we’re just really thankful that all our work, and all our smart work, is paying off.”

Prior to Ezegelian’s joining the group in 2015, Daversa, Hertler and guitarist John Barry were the Metal Hawks. “We were definitely more on the metal side on the rock spectrum,” Hertler said. “When Adam came in, he kind of has that punky kind of voice, which is very rhythmic. So we shifted more toward hard rock.”

Not to mention, Ezegelian is a Jack Black look-alike — which may have motivated the band to seek the actor’s response on TikTok, Hertler said.

“From Day One of hopping on TikTok, every other comment would be like, ‘He sounds so much like Jack Black,’” said Hertler. “And whenever we [covered] Tenacious D, it did super well, because … well, he’s basically Jack Black.”

Ezegelian said the band members have different musical influences, but they all come from rock. “For myself, I’m more of a classic rock [listener]: AC/DC, Aerosmith, Guns N’ Roses,” he said. “Rock music has that energy that we’re trying to bring as a band. The driving rhythms, the high-energy performance and the fun, especially, is what we’re trying to bring. Rock just fits that perfectly.”

AMH hasn’t performed in person, Ezegelian said, since it blew up on TikTok, but the group does a musical live stream on TikTok each week, which typically pulls in an audience of 2,000 or so. “We definitely have the eyes, but now we need to see them in person,” Ezegelian said.

While the coronavirus pandemic has been full of tragedy, Daversa said, it gave the band the opportunity to expand on social media. “I’m not going to sit here and glorify a pandemic, but if it wasn’t for Covid, I don’t think we would’ve hopped on TikTok when we did,” he said. “I don’t think we would’ve had the original songs coming out as soon as we did, and we would’ve grown at the rate we have.” From quarantine, AMH also recorded a music video for an original track, “Strain.”

The group uploads roughly three videos to TikTok each week, ranging from classic rock covers to the “Pokemon” theme song. Many of its videos posted to TikTok within the past month have over a million likes.

“We’re just always trying to have fun in our videos,” Ezegelian said. “That’s why we have such a large following — they want that little piece of fun, that serotonin boost, in their day, and that’s where we come in.”

The group has a couple of shows on the horizon, but dates have yet to be finalized. For now, Daversa said, Adam and the Metal Hawks plan to post more videos to TikTok. The group is currently recording new music at DCity Studios in Huntington, and aims to have a single out late this summer.