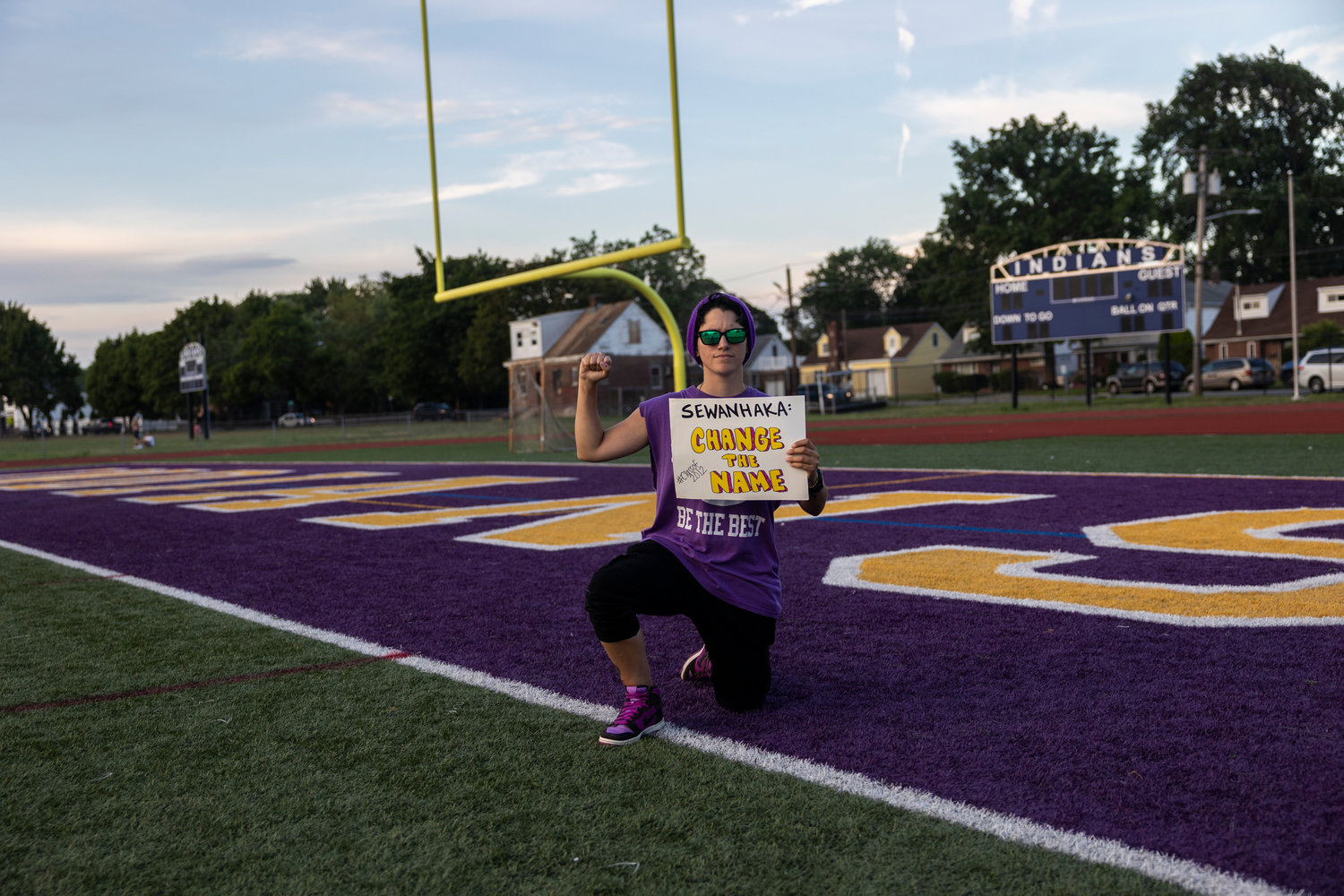 Marissa Linsalata, a 2012 graduate of Sewanhaka High School, took a knee on the school’s football field and called for the replacement of the Indian mascot.
Courtesy Marissa Linsalata 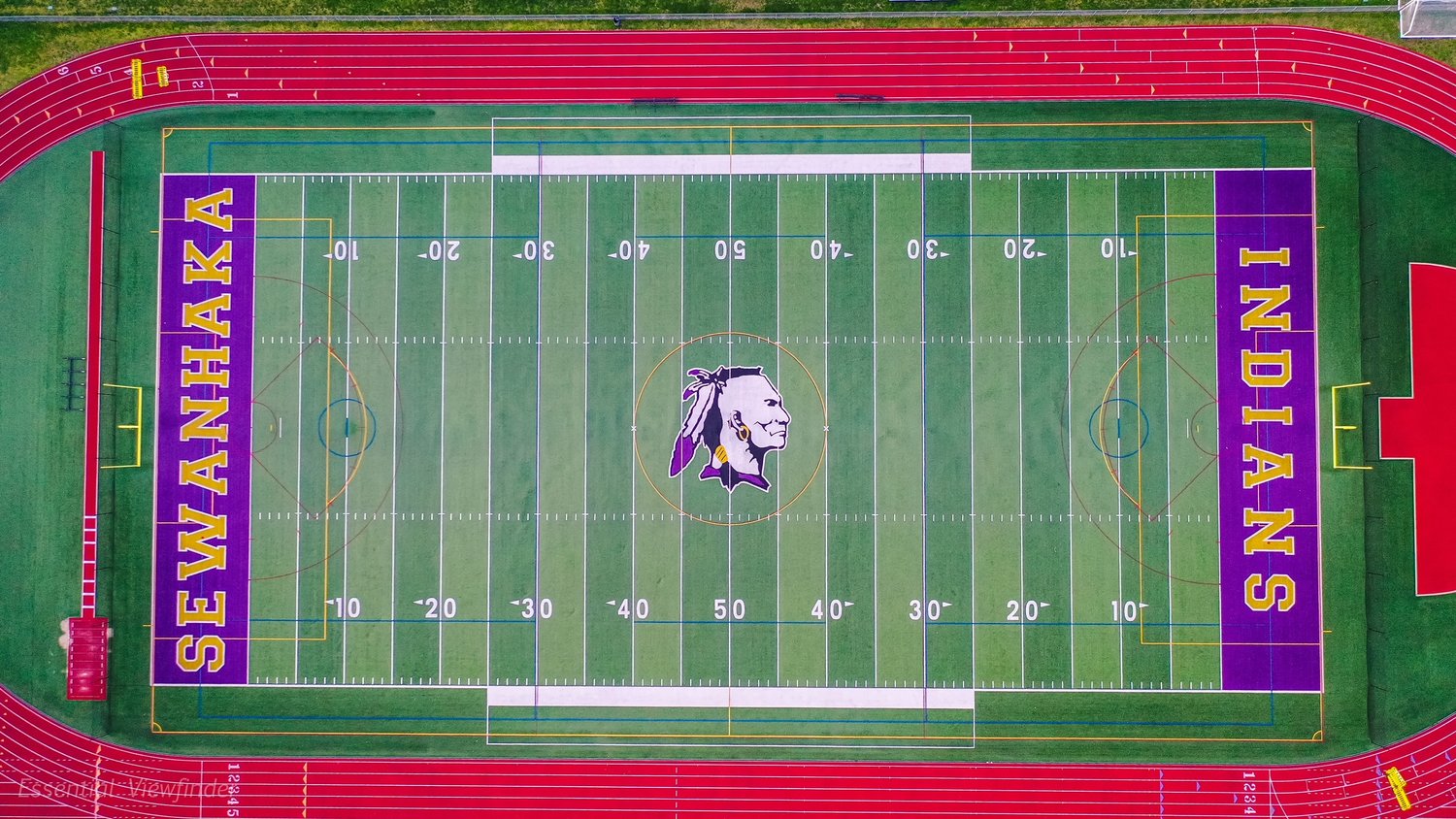 An aerial photo of the Sewanhaka High School football field and its mascot. The school will have to rename its sports teams.
Courtesy Essential Viewfinder
Previous Next

When I think about the long history of being removed from our cultures, I understand these punitive measures may seem extreme, but we are in the fight for our cultures right now.”
Lily Joy Winder, 19-year-old Diné and Southern Ute activist and founder of the People Not Mascots movement.
By Ana Borruto

The New York State Education Department is calling for an end to the use of Native American mascots in schools — and Sewanhaka High School is on the list of schools that must comply by the end of the 2022-23 academic year.

The indigenous community agreed that the move is a long time coming.

James Baldwin, senior deputy commissioner of the State Education Department, sent a letter on Nov. 17 informing all New York school districts of a recent legal decision that prohibits public schools from utilizing Native American mascots and imagery, because they are offensive to indigenous people.

If Sewanhaka High School fails to remove its mascot — the Indian — by the end of 2022-23, the deputy commissioner said the school could be in willful violation of the Dignity Act and face penalties, such as the removal of school officers and the withholding of state aid. “Native people, we’re losing our cultures,” said Lily Joy Winder, 19-year-old Diné and Southern Ute activist and founder of the People Not Mascots movement. “My parents were kidnapped from their home, had their hair cut off, had their language taken from them. When I think about the long history of being removed from our cultures, I understand these punitive measures may seem extreme, but we are in the fight for our cultures right now.”

The Sewanhaka Central High School District declined to comment as of press time.

The district was formed in 1929, when Sewanhaka High School was built, and the Indian has remained the school’s mascot ever since.

In Baldwin’s letter to the school districts, he said the state education department has “consistently opposed the use of Native American mascots.” In 2001, Richard Mills, the former commissioner of education, issued a memorandum mentioning that the use of Native American symbols or depictions as mascots can “become a barrier to building a safe and nurturing school community and improving academic achievement for all students.” Mills then called for the removal of all Native American mascots in public schools as soon as possible.

In 2020, the Herald reported that Sewanhaka district officials refused to change the Native American mascot at that time. Edward Tronolone, the then-assistant superintendent for instruction, reportedly said, “We didn’t feel it was disrespectful in any way.”

An $86.6 million bond referendum was approved in 2014 to fund renovations within the Sewanhaka Central High School District. In 2015, a brand-new turf field was completed that reads “Sewanhaka Indians,” inscribed in the school’s purple, white and gold colors and displaying a portrayal of a Native American man’s head in the center.

The Herald reported in July 2020 that school district officials decided to re-evaluate the mascots of all five schools for potential racial insensitivity after students expressed their concerns, specifically about the Indian mascot.

According to the minutes from the Aug. 25, 2020 Board of Education meeting, the district received 25 letters in support of keeping the Sewanhaka High School mascot and 24 requesting its removal. All the letters were previously forwarded to all the school board members.

Many alumni expressed their frustration on Facebook with the state education department’s decision, mainly arguing that the mascot “honors” Native Americans and respects tradition.

The state’s letter explained that the only way school districts would be allowed to continue using the mascot is if they received approval from a recognized tribe. Cliff Matias, a member of the Kichwa and Taino nation and performing artist for the Redhawk Native American Arts Council, said he believes these schools will not receive permission from indigenous people to use them as mascots.

“Human beings are not mascots for America’s fun and games,” Matias said. “We’re talking about a people who face extreme racism, and now you’re going to ‘honor’ them — it’s just trying to hold onto this dinosaur mentality.”

Marissa Linsalata, a 2012 graduate of Sewanhaka High School, said she remembered that it was the norm to see someone wearing a headdress and dressing up as a native person at the high school’s pep rallies. Now, reflecting back on her high school experience 10 years later, Linsalata said she was fortunate to attend the six-year school, but said she feels the mascot is not a positive representation of the school.

“I just think the change would better reflect the student body and bring light to something that maybe the current community is really not aware of, or that the older generation and administration has failed to let go,” Linsalata said. “You have people of different ethnicities, different races, so having that be a mascot, it’s not really appropriate or representative of authentic Native culture.”

Linsalata started a Change.org petition in August, calling for the school district to change the Sewanhaka High School mascot. Although she received some backlash, she said as a mental health advocate and LGBTQ+ person, she felt it was important to listen to the lived experiences of marginalized people and stand in solidarity.

Winder said she collects and lists petitions from all over the country that demand the removal of Native American mascots from schools. According to the campaign’s website, one in 19 secondary schools nationwide have a Native American mascot. The number of petitions and advocacy in the United States is growing and Winder’s mission is to eradicate these offensive depictions of her culture.

“There’s definitely a light at the end of the tunnel,” Winder said. “I do see people understanding that there is scientific backing, there’s cultural backing, there’s various generations and histories of backing to the reasoning why we believe these things and we know native mascots are harmful to our children.”