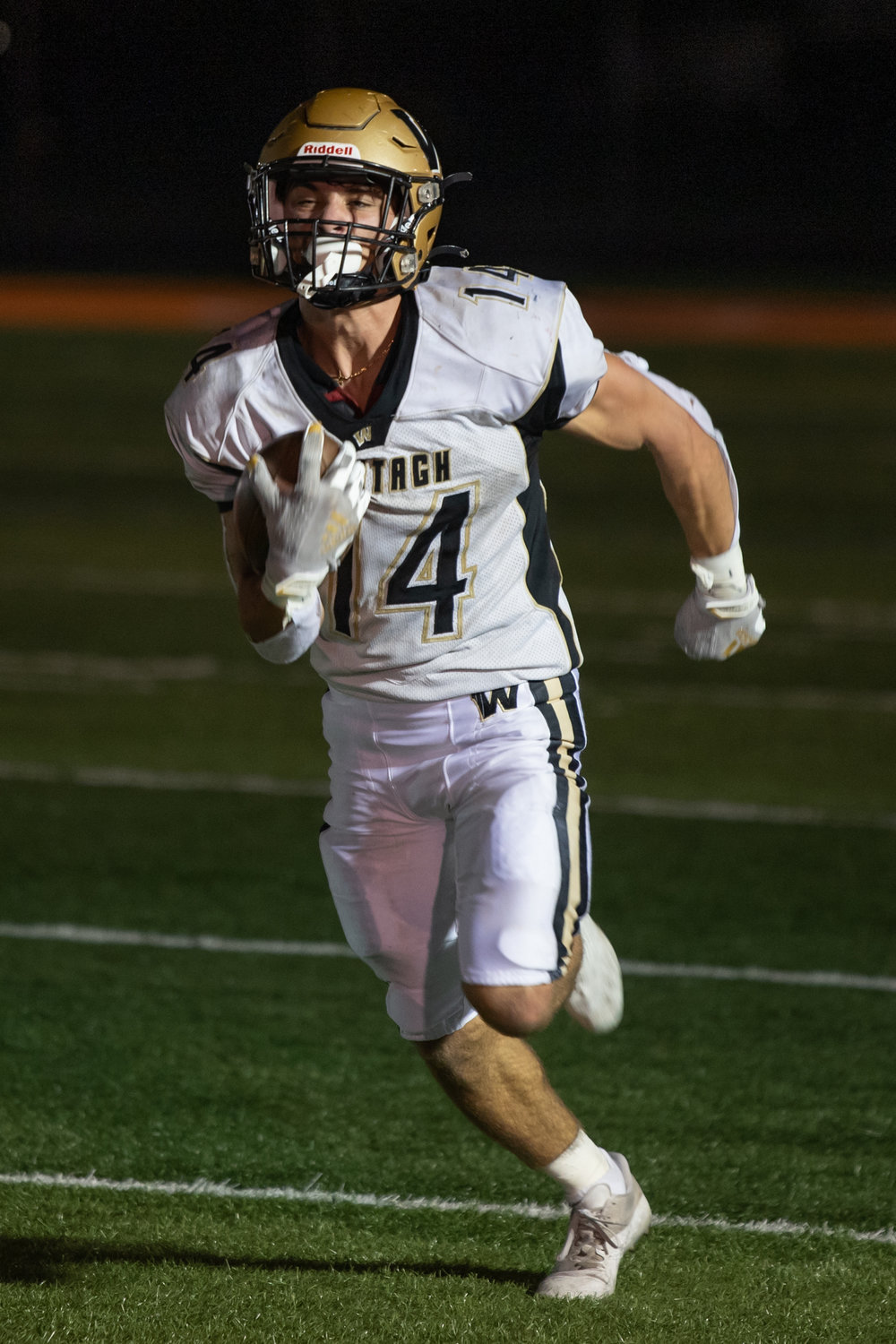 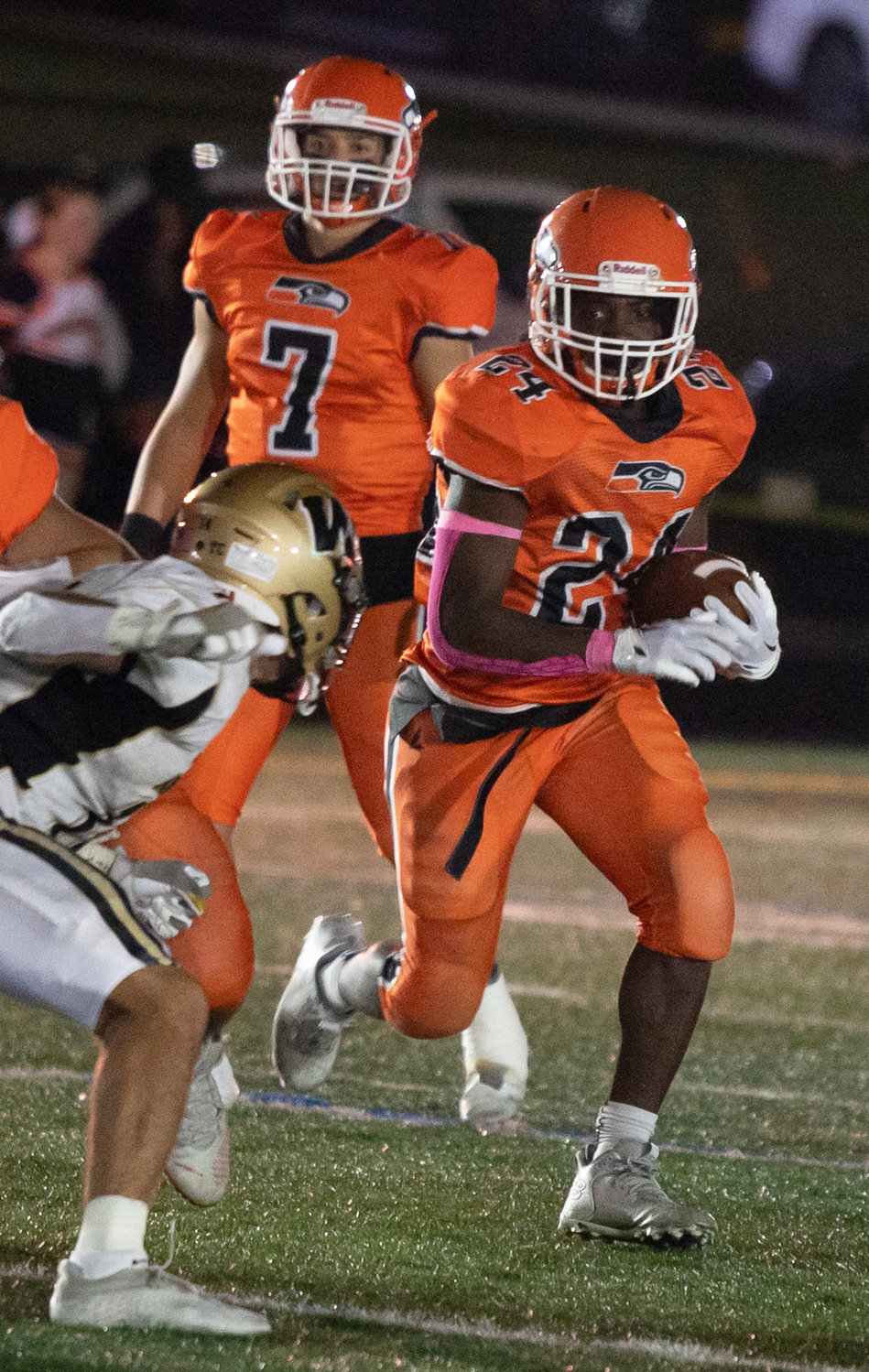 Feeding off the energy of its overflow Homecoming crowd Friday night, Carey orchestrated an impressive opening drive covering 74 yards on 10 plays to get the early jump on Wantagh in a Nassau Conference III football showdown.
However, the rest of the unseasonably warm fall evening belonged to the visiting Warriors’ defense and senior running back Nick Cupelli.
Wantagh held the Seahawks scoreless over the last three-and-a-half quarters while Cupelli ran wild, totaling 267 yards and three touchdowns on 19 carries to lead a 28-6 victory. Senior quarterback Joe Legovich added a touchdown run, and seniors Antony Tsakos and Noah Corwin made eight tackles apiece as the Warriors (5-0) stayed perfect on the year.
Junior Will Tolliver rushed for 76 yards and scored the lone touchdown for Carey, which slipped to 3-2.
“I was OK with facing some adversity against a good team,” Wantagh head coach Keith Sachs said. “They came out strong and I like the way we responded.”


Wantagh trailed for the first time all season after the Seahawks cashed in their first possession. Tolliver, who a week earlier torched Division for 161 yards and four touchdowns on the ground, was one of five Carey players to gain considerable yardage on the opening drive. Senior offensive lineman Vincent Tierney and sophomore Michael Verderosa added first-down runs, and senior quarterback Matt Metzger completed a 13-yard pass to junior Matteo Tufano to set up Tolliver’s 2-yard scoring run for a 6-0 lead. Junior TJ Wakely also caught a Metzger pass during the series.
“We still have some work to do if we want to beat really good teams,” Carey head coach Mike Stanley said. “We’ve been a very physical group and I’m hoping we are maturing to the point where we can play complete games.”
Tufano had an interception to halt Wantagh’s opening drive, and the Warriors didn’t get their offense in gear until the closing minutes of the first half when they struck twice to seize momentum.
On its first scoring drive, Cupelli accounted for 58 of Wantagh’s 77 yards and capped it with an 8-yard touchdown with 2:06 remaining in the second quarter. Junior kicker Nico Zervos’ first of four successful extra-point tries put the visitors ahead for good, 7-6.
The Warriors were soon back in business at the Carey 41 after its defense forced a three-and-out. And 24 seconds proved enough for the offense to work with. Cupelli had a 25-yard catch off a gadget play to move the ball into the red zone. Legovich then connected with senior Anthony Reale for 10 yards and senior Tim Hennig for 5, and with time for one more play audibled on a quick count and followed the block of senior center Steven Clark into the end zone for a 1-yard touchdown and Wantagh led 14-6 at halftime.
Cupelli scored from a yard out to cap the opening possession of the third quarter for a 21-6 cushion and sealed the outcome with a 4-yard score early in the fourth. “He’s the real deal,” Sachs said.
Next up for Wantagh is its Homecoming game this Saturday against Floral Park at 2 p.m., the same time Carey kicks off its home finale against Roosevelt.