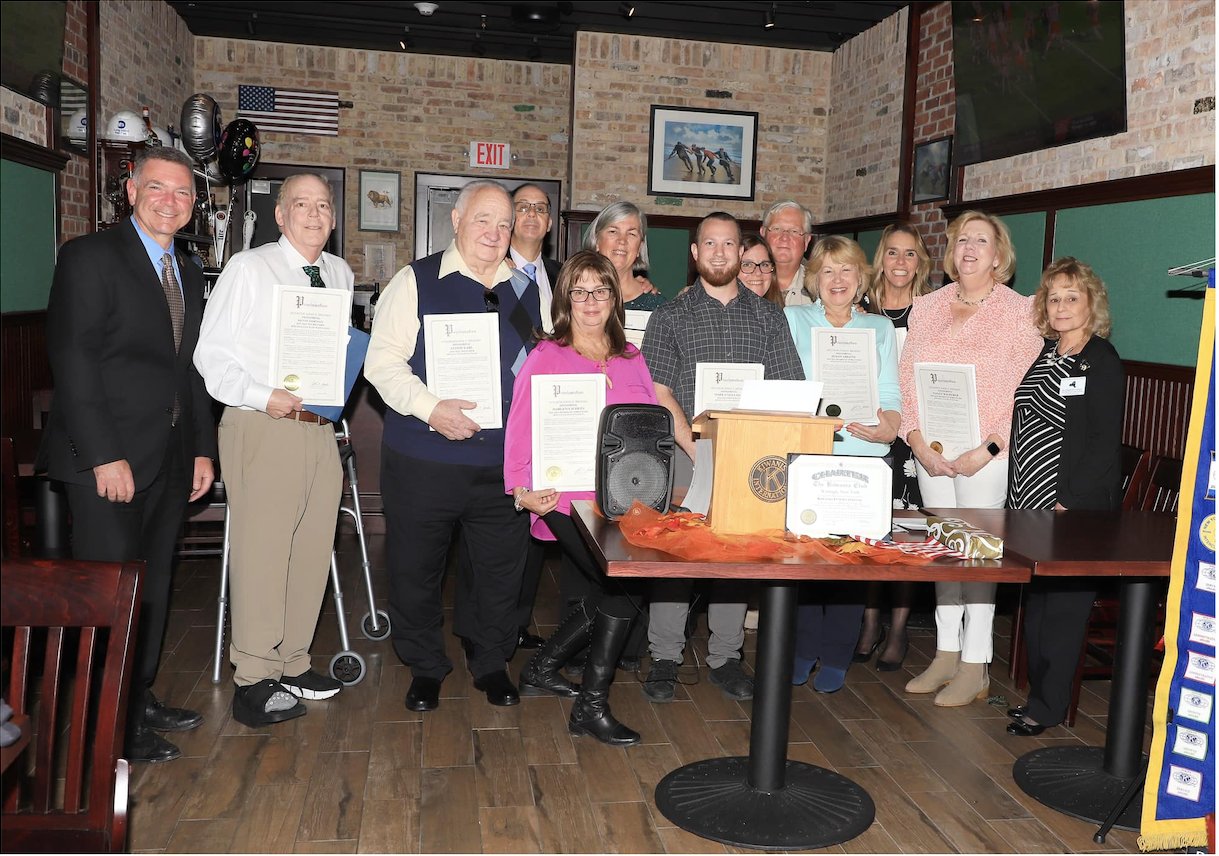 Mark Engelman was instated as the president of the Kiwanis Club of Wantagh on Nov 6 at The Irish Poet in Wantagh.
Courtesy Mark Engelman
By Mallory Wilson

The Kiwanis Club of Wantagh welcomed new leadership at its 67th installation luncheon on Nov. 6 at The Irish Poet in Wantagh.

Mark Engelman, 30, was appointed president of the Wantagh Kiwanis at the installation. He succeeds immediate past president Margaret Silberger.

Engelman, of Queens, has been involved with the Wantagh Kiwanis since he graduated high school. Though he’s been an unofficial volunteer for years, he officially joined the team two years ago.

“It’s a great, very open service organization,” Engelman said. “...I wanted to be more involved in the community and do more local service.”

Engelman said when he first joined he was blown away by how the Wantagh chapter of the organization helps out locally. “Even though there is an international Kiwanis and a New York District Kiwanis, it’s really all powered by the local clubs,” he said.

Engelman also served as a board member of the organization. “I’ve always been the type of person to put more on my plate if I can,” he said. “I think getting involved is very important in community service.”

Engelman said he has sought out advice from older club members to help him run the club. “There’s a lot of support from the existing members,” he said. “There’s a value you get out of it.”

Margaret Silberger, the Kiwanis president for the past two years, said Engelman is an active group member.

“He’s really giving and he believes in the cause,” Silberger said. “He’s young, he has youth on his side and comes with new ideas.”

There are certain qualities that make an impactful Kiwani president, she said. She described Engelman as “diplomatic”, “democratic”, and very open to new ideas.

“You have to believe in what you’re doing,” the former president said. “It’s important not to be ‘I’ it’s always ‘we’ - and he believes in that.”

The Wantagh Kiwanis has been busy with community events. The group hosted a booth at the Winter Wonderland festival at the Wantagh Museum this season, assisted with collecting donations for the Salvation Army on Dec. 6 and 7, and had a club membership round-up on Dec. 1 at Craft Kitchen in Wantagh – which brought out six prospective members.

Kevin Gorman, a 10-year member of the club and the club’s secretary said Engelman has the qualifications to be the group’s president. “He’s enthusiastic and has a number of ideas he wants to try,” Gorman said. “We’re looking forward to supporting him.”

Next year, Engelman said he aims to have the group collaborate with the Long Island Adult and Teen Challenge, a faith organization for youth, adults, and families struggling with life-controlling problems, such as addiction.

“I’ve seen them around occasionally collecting donations at stores,” he said. “They seem like a great organization for those struggling with addictions.”

Wantagh Kiwanis is no stranger to service projects and helping out children and those in need. It’s been active for the past 67 years and is part of a global organization of volunteers, Kiwanis International, which is dedicated to improving the world, one child and community at a time.

The club meets the first Wednesday of every month at Thom Thom Steak and Seafood on Park Avenue, in Wantagh.