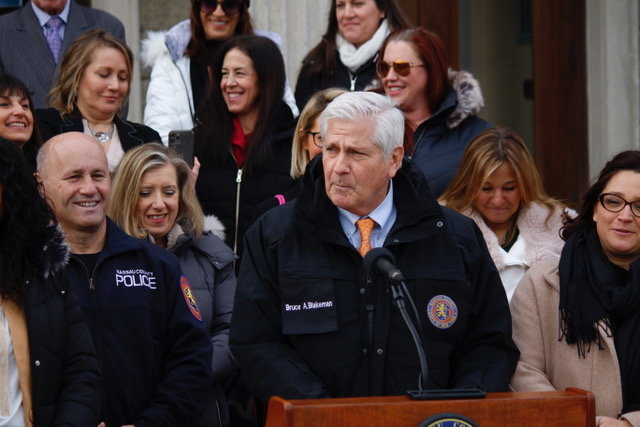 Nassau County Executive Bruce Blakeman, who took office Monday, signed executive orders Thursday morning directing local boards of education to vote in January on whether their districts should mandate mask use, while also lifting the mask mandate for all county agencies and the state's temporary mask mandate in public places.

The orders read in part, ". . . given the historical data on Covid-19 and the ongoing debate over whether masks are more harmful than beneficial to children and to school environments in general, we should protect the freedoms and statutory rights of students and parents by resting with the parents the decision whether their children should wear masks in school."

School boards must vote "to determine whether or not parents and children should be granted the constitutional right to reject mask mandates while in the classroom."

The orders further state, "More than half of all states in the nation have no set policy on masking at educational institutions, leaving the decision up to local governments to decide when and how to enforce mask mandates."

The orders were to take effect immediately.

"Counties do not have the legal authority," the commissioner continued, "to require boards of eduction to vote on specific issues. School officers take an oath to obey all legal requirements. The State Education Department expects school boards will follow all legal requirements, including the face-covering regulation."

William Biamonte, chief of staff to the County Legislature's Democratic minority, said, "When ideology trumps science and politics are prioritized over the common good of society, our most vulnerable residents stand to suffer the most.

"County Executive Blakeman," he continued, "can say that 'Nassau is normal again' all he wants, but as Omicron continues to spread like wildfire and hosptialize more children than any other Covid variant to date, this is a recipe for disaster."

The governor said at the time that she expected the positivity rate would rise with the rapid spread of the Omicron variant.

Blakeman also announced that 20,000 test kits would be distributed at Tobay Beach for county residents who live south of Hempstead Turnpike, and at Eisenhower Park for those who live north of the turnpike on Saturday, Jan . 8 and Sunday, Jan. 9, from 8 a.m. to 1 p.m. or until supplies last. There will also be what Blakeman called a vaccination pod this weekend at Nassau Community College from 10 a.m. to 3 p.m. by appointment only. Go to https://www.nassaucountyny.gov/.

And the county will distribute KN95 masks to private and public schools for staff, especially teachers.

Jeff Bessen contributed to this story.