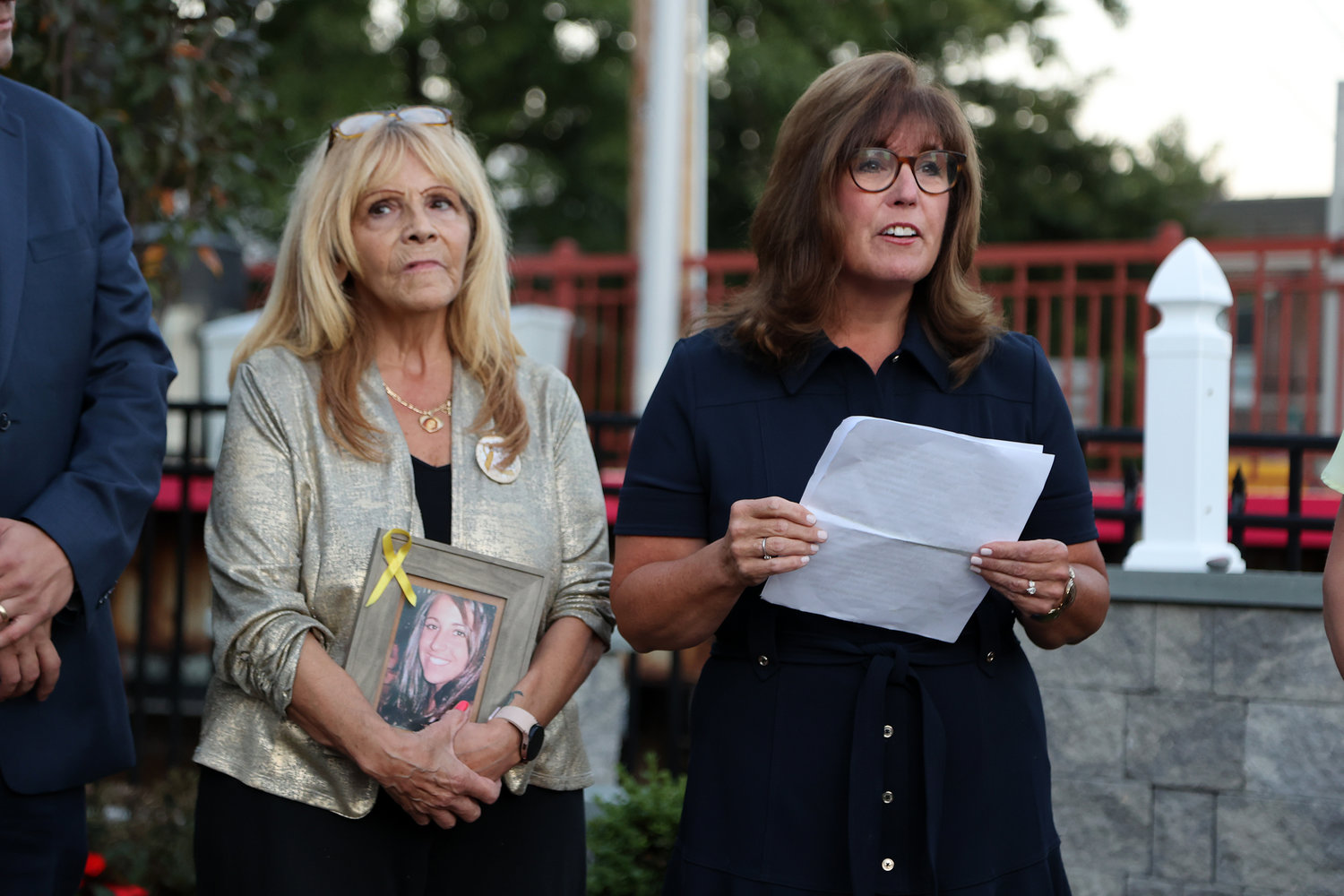 Marie Giallombardo held a picture of her daughter Gina, who died from cancer at 21, as Carol Ruchalski spoke of her own daughter Mary who died of the same type of cancer at only 12. The gold tree lighting in Malverne was held in Mary’s honor.
Sue Grieco/Herald 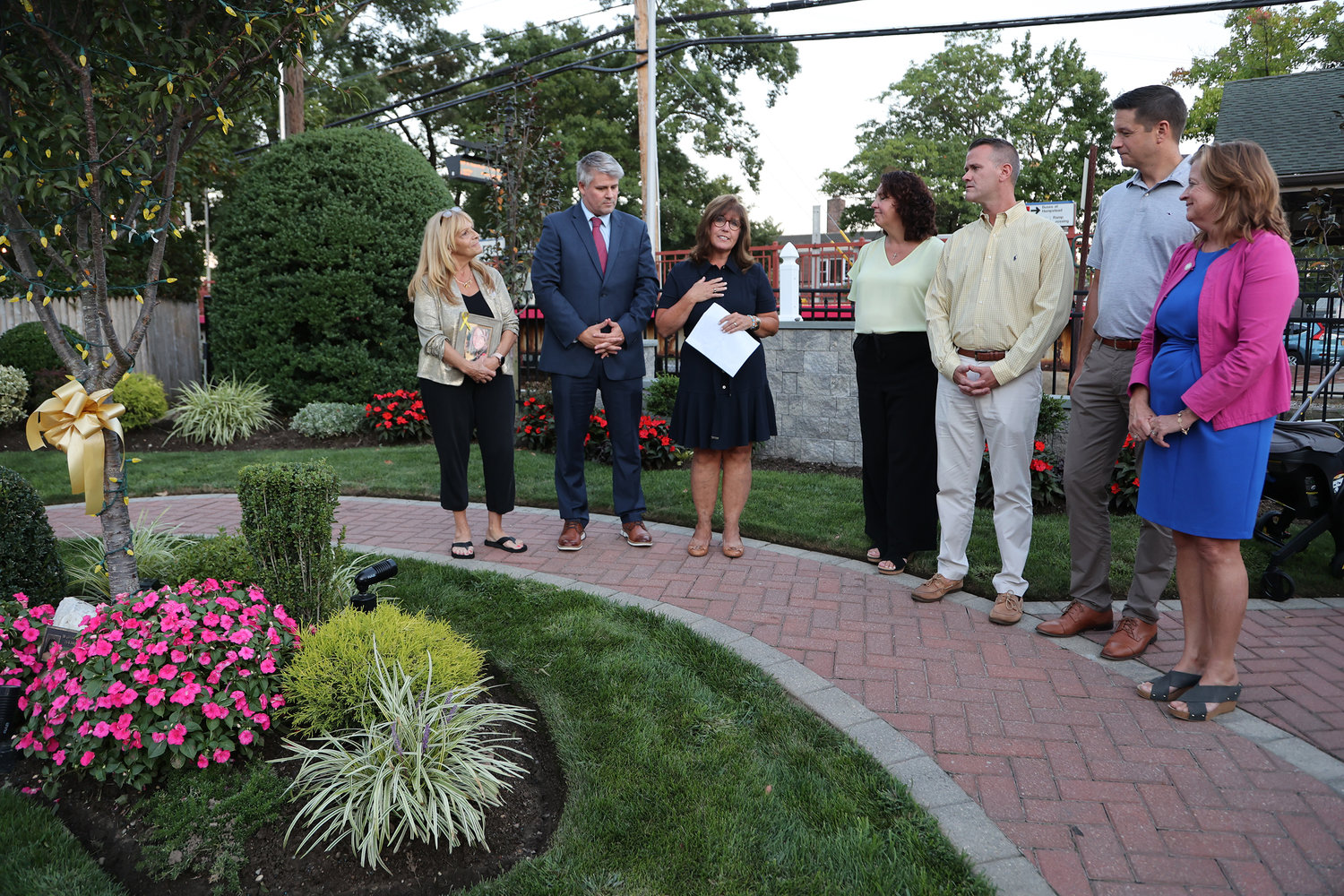 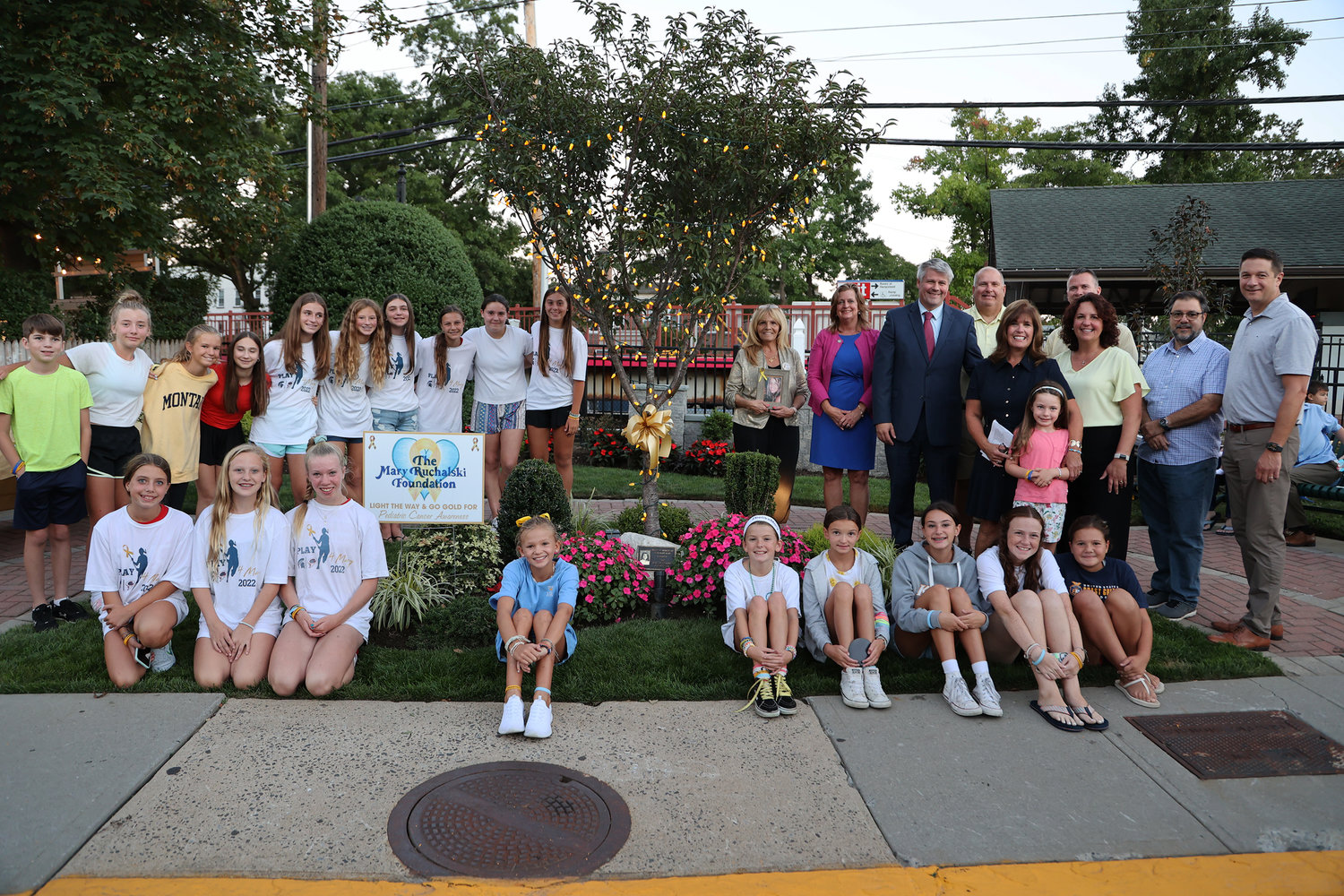 The friends and family of Mary Ruchalksi gathered along with politicans and community leaders in the park across the tracks from Malverne’s LIRR Station for the lighting of the gold tree, dedicated to Mary, who died of a rare cancer in 2018 at just 12 years old.
Sue Grieco/Herald
Previous Next
By Kyle Chin

For the third year in a row, the fountain outside Malverne’s LIRR station was the site of a ceremony calling attention to childhood cancer in memory of a Rockville Centre girl.

The ceremony is held in memory of Mary Ruchalski, who died in March 2018, just two days shy of her 13th birthday. Mary was diagnosed with rhabdomyosarcoma, a rare form of cancer that originates in skeletal muscle tissue and is most common in children. Mary’s mother, Carol Ruchal-ski, said the idea of lighting up a tree was inspired by her daughter’s love of Christmas.

Ruchalski, director of the Mary Ruchalski Foundation, which focuses on pediatric cancer, reflected on the feelings of lost possibilities September brings to parents like her.

“September is always so full of possibilities, new beginnings and excitement for what lies ahead,” she said. “But for a bereaved parent like myself, it’s a stark reminder that our child is not (here) and there will be no new beginnings for them.

“My Mary would be starting her senior year of high school and excitingly looking for colleges,” Ruchalski added. “She was so full of life and love and kindness that it pains me to think of how much she suffered.”

The gold tree lighting is a tradition that has been growing since it was first held in Rockville Centre in 2019.

“Malverne was the second town, and it just keeps going and going,” Ruchalski said.

Our Lady of Lourdes Roman Catholic Church is also in the process of organizing a gold tree lighting of its own.

“We thought it was a cause worth noting and sharing with the community,” Sullivan said. “We’re happy to carry on the tradition and expand it. It’s the least we can do for a population that needs our help the most.”

This year, the ceremony focused on a tree planted in Mary’s memory in a small park between Malverne’s Long Island Rail Road station and Connolly Station restaurant.

The tree was planted last year, and Malverne’s department of public works completed an overhaul of the park.

“DPW, the union itself, did all the planting,” said Malverne Mayor Keith Corbett.

Ruchalski added, “They did everything out of the kindness of their heart. It was so heartwarming.”

Mayor Corbett said, “We’re honored to be one of the first communities to recognize pediatric cancer awareness month. We stand in full support of the Ruchalski family and their organization.”

Marie Giallombardo attended the ceremony in support of the Ruchalskis. She represents the Life for Gina Foundation, founded after her own daughter, Gina, died of cancer in 2011 when she was just 22 years old.

“I read in the Herald one day that a young girl passed away from the same type of cancer my daughter did,” Giallombardo said.

“I happened to be walking one day and I bumped into Carol where they had the tree planted in Rockville Centre. That’s when we started doing all this together. Our daughters brought us together.”

Assemblywoman Judy Griffin was also on hand to present Ruchalski and Giallombardo with special citations for their work with pediatric cancer awareness.

“My daughter went to nursery school with one of their daughters, so I’ve known them for a long time,” Griffin said. “I knew Mary. She was a lovely young girl, and I saw how difficult it was for her to go through this horrific cancer.

“It’s a tough issue to tackle state by state, because pediatric cancer is everywhere,” Griffin added. “But certainly we can bring more attention to it. One thing I’d like to see in our state budget would be a line item that directed money to pediatric (cancer) research. I’ve had other friends with children suffering from cancer, and those cancers are often the least researched and the least funded.”

The Mary Ruchalski Foundation directs all proceeds towards cancer research and families dealing with pediatric cancer. To date, the foundation has donated more than $300,000 to Cold Spring Harbor laboratories’ rhabdomyosarcoma research and $100,000 to families struggling with the cost of medical treatments.

“I think the light from this tree and the lanterns can be seen from heaven, and beyond, and I know our angels are very proud,” said Ruchalski.