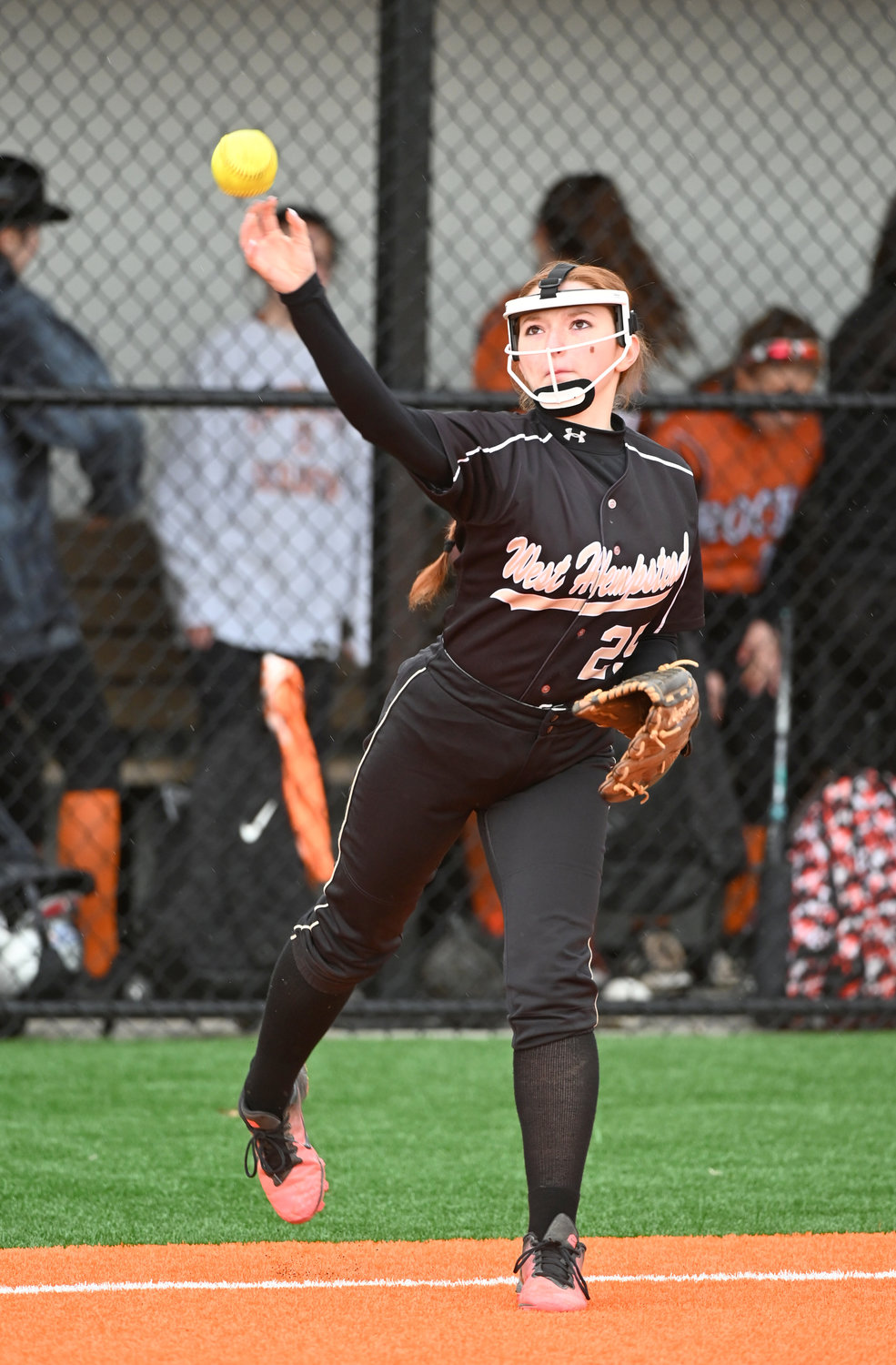 Junior Samantha Mitchell is one of nine returning players for West Hempstead, which won its first two out of the gate.
Donovan Berthoud/Herald
By Tony Bellissimo

West Hempstead is already one win away from matching its win total from the 2021 softball season.

The Rams, still playing a challenging numbers game with a small roster and no JV program, defeated Roslyn 11-3 in the Conference VI opener April 1 after knocking off Garden City in the season opener a few days earlier.

“We’re in a pitcher-friendly conference and we should be competitive every day,” West Hempstead coach Chris Van Kovics said. “The entire conference looks like a toss-up.

“We haven’t had strong numbers for a while, but at least this year we have 9 of the 12 girls back from last season,” he added.

The Rams finished 3-11 in conference games last spring with one of the victories coming against eventual Nassau Class C champion Oyster Bay. On the flip side, they struggled to hang with the likes of Baldwin, Port Washington and South Side, Van Kovics said.

So far in the early going, senior pitchers Isabella Torres and Jenni Axel are both getting the job done. Both struck out 7 in the opener, and Axel followed with 7 more Ks against Roslyn.

“It’s a nice luxury to have two pitchers,” Van Kovics said. Isabella worked hard during the offseason with the help of a pitching coach and is greatly improved. She was consistent last year and looks even more consistent now. She’ll play right field when Jenni pitches. Jenni needs to throw strikes to be successful,” he added.

Both Torres and Axel are contact hitters who can help the offense as well, the coach noted.

Jenni’s twin sister, senior Joey Axel, returns as the starting catcher and is a middle-of-the-order bat. “She has a good arm and plays strong defense, and we also need her to drive in runs,” Van Kovics said.

Two of the team’s award winners from a year ago return to lead the infield. Junior shortstop Kayla Pendergast was Honorable Mention All-County and junior Ashlee Boodoo (first base) earned All-Conference honors. “They’re both serious about softball and take it very seriously,” Van Kovics said. “Ashley’s our leadoff hitter and when she gets on base, chances are we’re going to score. Kayla will hit somewhere in the 3-4-5 spots all year and covers a lot of ground from short.”

Boodoo was a double shy of hitting for the cycle against Garden City and stole home against Roslyn.

Juniors Samantha Mitchell and Sara Marini return at third and second base, respectively. Both are quality defenders. Marini or freshman Danielle Koodsi will play right field when Torres pitches. Mitchell can hit anywhere in the top five, Van Kovics said.

Junior Gabriella Koodsi is a versatile outfielder likely to patrol left most of the time, the coach said. Emma Shinsato, who knocked in two runs in the win over Roslyn, is a smooth fielding center fielder also capable of playing second base.