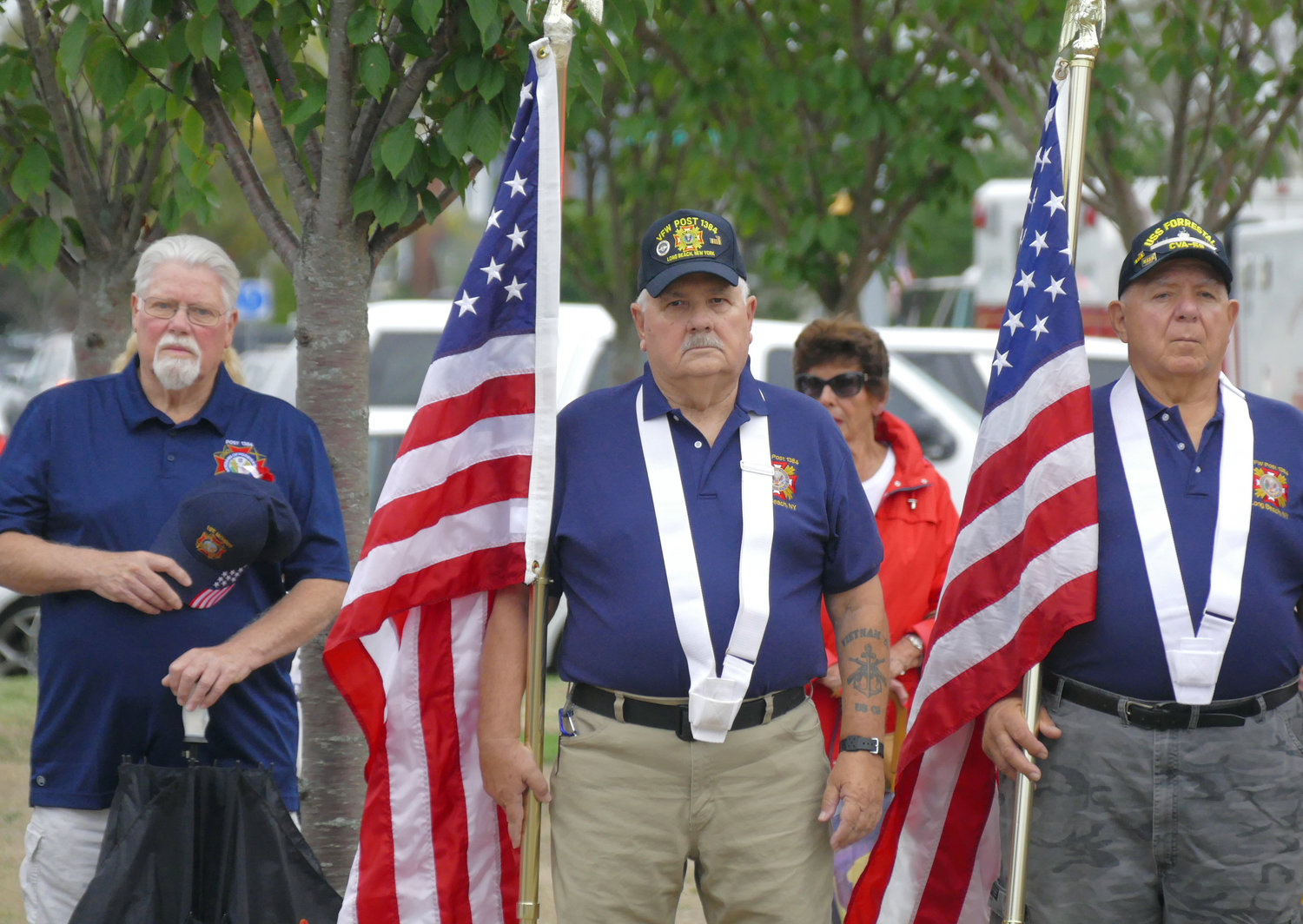 Long Beach Veterans of Foreign Wars members presented the colors at the 21st-anniversary remembrance of the Sept. 11 attacks.
Joe Abate/Herald
By James Bernstein

Twenty-one years may have passed since Sept. 11, 2001, the day America was attacked by hijacked jetliners that slammed into the twin towers of the World Trade Center, but Al Fuentes is among those who can never forget.

“On this day each year, the night before, I start getting flashbacks,” Fuentes said last Sunday. “My body is quivering.”

Fuentes, a 26-year veteran of the New York City Fire Department, was among the last of the firefighters to be pulled alive from the wreckage of the towers that horrific day. He was serving as acting battalion chief of the FDNY’s Marine Division when the towers were hit. He was barely conscious when he was found — neck-deep in debris — by some of his men, who had heard his earlier radio calls.

The Marine Division responded immediately after learning that the towers had been hit, hoping to find survivors.

On a gray, rainy late Sunday afternoon, Fuentes was one of several speakers at Long Beach’s annual Sept. 11 remembrance, at the Fire Department Memorial at West Park Avenue and Lafayette Boulevard.

“At Mass this morning, I heard something that stayed with me,” said Fuentes, whose two grandchildren, John and Michael Giardina, ages 4 and 2, stood a few yards away, with their mother, Elizabeth, of Lido Beach. “When you think of somebody and mention their name, they are still with you.”

“We can all say that 9/11 was one of the most horrific days in American history,” Fuentes added. “But I say it was our finest hour.”

Fuentes, now retired, lives with his wife, Eileen, in a house on Reynolds Channel.

About 100 people turned out in the rain to hear the speeches, on a day when the Town of Hempstead also held a 9/11 memorial, at daybreak in Lido Beach, and some hardy surfers took part in a ceremonial paddle-out in the Atlantic Ocean.

Long Beach Fire Chief Scott Kemins summed up the feelings of many. “It’s hard to believe 21 years have passed,” he told the crowd. “But we’re all here, as we promised we would be.”

“But sometimes it’s not about the numbers,” she continued. “We all have a personal connection to someone who died on 9/11.”

Kemins said that 16 Long Beach residents had died of illnesses resulting from their work after the attacks.

County Legislator Denise Ford, who represents Long Beach, noted that the losses on Sept. 11 included young mothers, who died when the buildings collapsed. “A mother died with a baby in her womb,” Ford said. “I wish I could be more upbeat, but I see women out there raising children by themselves.”

Rabbi Jack Zanerhaft, spiritual leader of Temple Emanu-El of Long Beach, asked rhetorically, “Why are we here? I believe there are many reasons, but among them is to remind our leaders to be vigilant, and always to remember.”

Long Beach Police Commissioner Ron Walsh read out the names of the 16 residents who had died of 9/11-related illnesses. Then five bells rang — the sequence meaning that a firefighter has answered his or her last alarm.