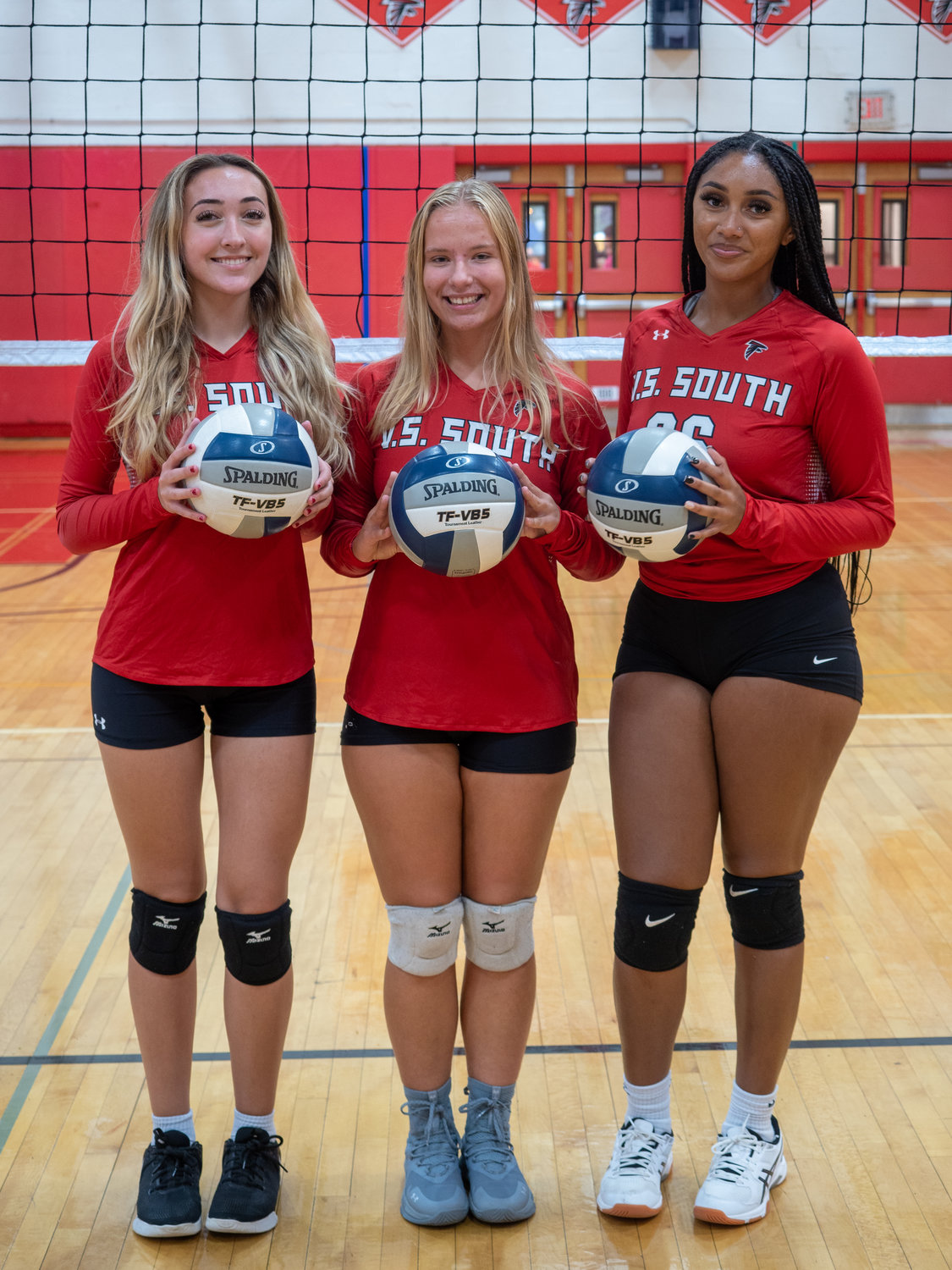 Senior co-captains, from left, Caraline Scanlon, Alina Trzcinski and LaMya Mays lead the Falcons down the stretch with a conference title in mind.
Eric Dunetz/Herald
By Garrett D. Uribe

Though an outlier bookended by .500 seasons, Valley Stream South’s 2021 spring breakout changed the DNA of the Falcons girls’ volleyball team
VSS went 12-0 that season to take the Nassau Conference A5 title before eventual county champion and A1 winner Wantagh stopped the Falcons in the first round of the Class A playoffs.
Coming off last fall’s 7-7 reversion to the mean and another first-round exit, VSS – led by its trio of senior co-captains – spent this past offseason trying to work backwards towards that better version of itself glimpsed all too briefly just 18 months earlier.
The Falcons’ efforts are being repaid.
With its 3-2 comeback league victory Sept. 29 at Carle Place, VSS bounced back from its lone loss Sept. 23 at Conference A/C4 foe Division to improve to 5-1 and move within a game and a half of first-place New Hyde Park (7-0 A/C4). A summer’s worth of long hours and a timely, key position swap have so far succeeded in placing the Falcons back on the path to contention.


“These girls put in lots of extra time in the offseason, and it shows,” said VSS coach Stephanie Calzetta. “They were not happy with being a .500 team last year, so they made that decision, and with that work they’re making it happen again. It’s amazing to watch. Our leaders really stepped up to help the others, and we’re jelling.”
One such Falcons leader is third-year starter Alina Trzcinski – a team tri-captain alongside fellow seniors Caraline Scanlon and LaMya Mays. A converted outside hitter, Trzcinski volunteered this summer to fill a vacancy at setter for the Falcons, learning the new position largely on her own. She ranks second in A/C4 with 91 assists, while leading the league with 36 service aces (seventh in Nassau). “Alina’s the ultimate leader, the most unselfish kid I ever met,” said Calzetta. “She decided she was going to teach herself how to set and she’s been amazing. She loves to hit, but she gave that up for the good of the team. And it’s working for us.”
A third-year-starting middle hitter, Scanlon leads VSS with 44 kills and ranks fourth in league with 25 aces. Her 14 kills in the Falcons’ loss to Division were a team season high. Mays, meanwhile, has stepped in to fill the opening at No. 1 outside hitter left by Trzcinski’s position switch. Calzetta noted the athletic second-year starter’s gameness in acclimating to the role. “LaMya’s just a natural with no formal training, and she’s doing a great job,” Calzetta said. “She has stepped up and she’s owned it.”
“All three of our captains have really been great,” added Calzetta. “They’re working with our underclassmen to make sure that not only are we a good team this year, but that the tradition continues even after they’re gone. This team has come back strong this season thanks to all that they’ve put into it. They really just made up their minds that this was going to be a playoff season.”