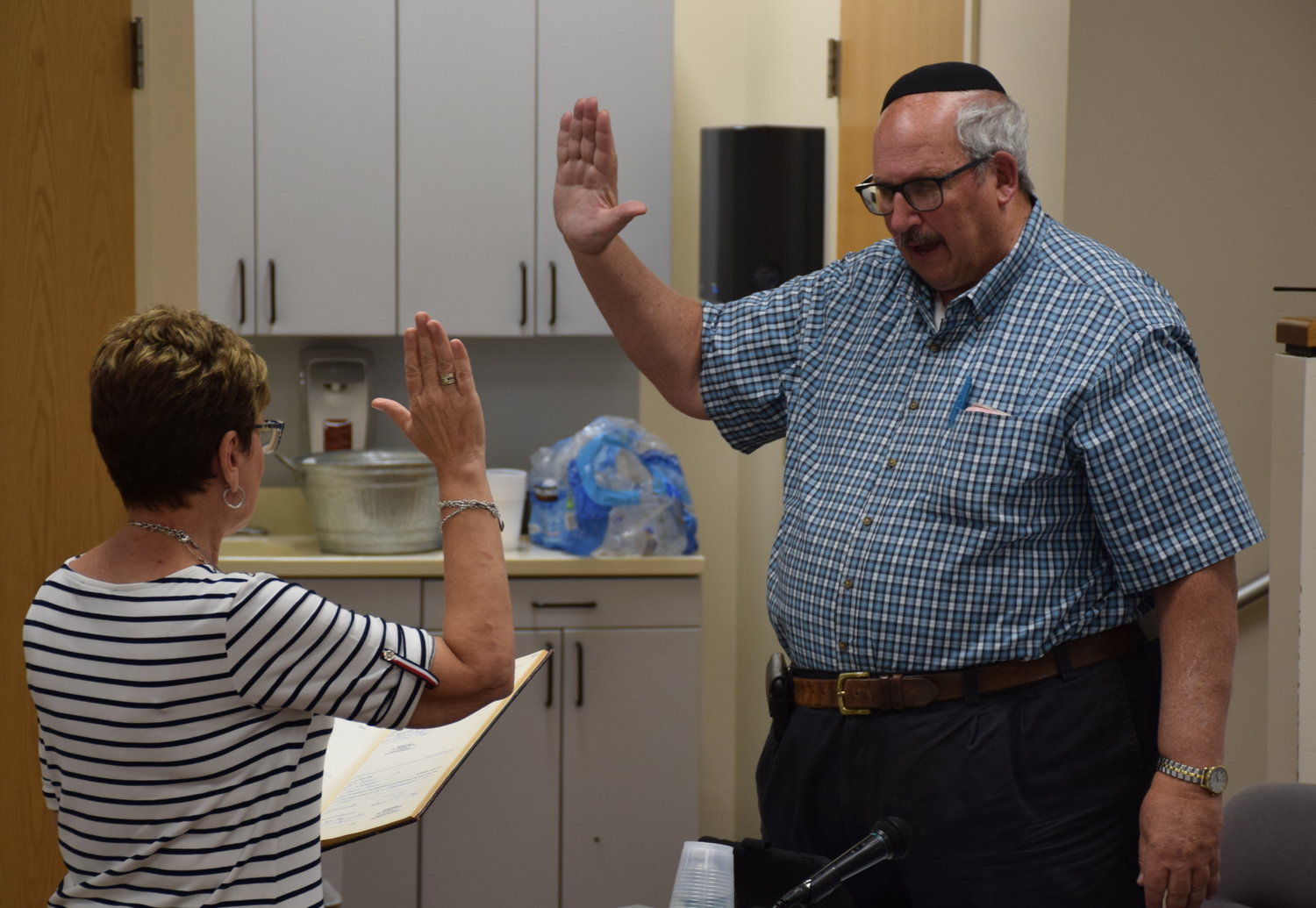 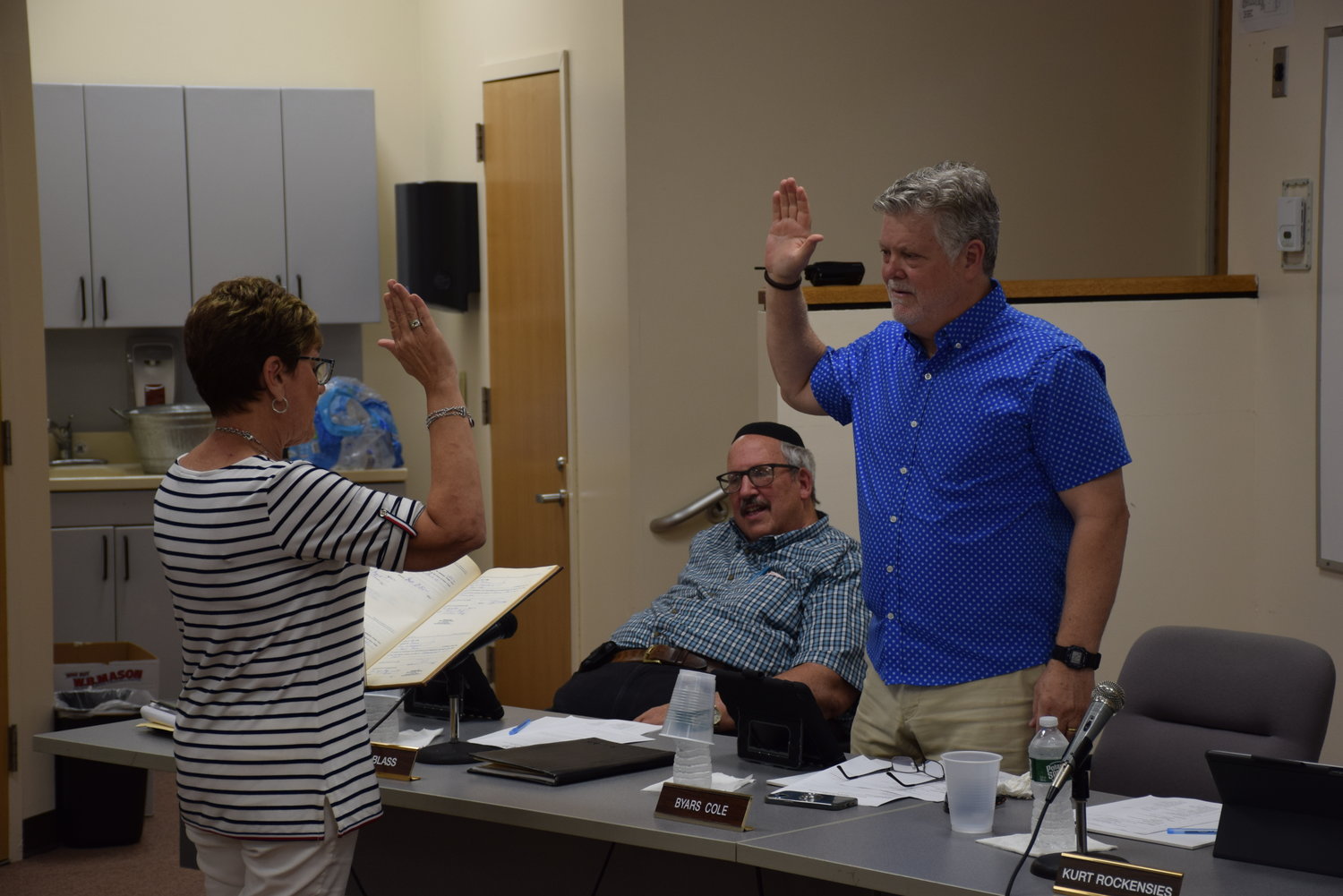 Byars Cole was sworn in as a school board trustee at the board’s reorganization meeting, his second time serving in that position.
Courtesy Syntax
Previous Next

Going forward, we should be walking hand in hand with the community . . . the district can provide more value where possible.”
Burt Blass, Trustee, West Hempstead school board
By Kyle Chin

The West Hempstead Board of Education welcomed two members to its ranks, one new and one returning, at its reorganization meeting on July 6. After the tumultuous budget vote of the last few weeks, the board also welcomed the opportunity to look forward to the year ahead.

Burt Blass is a newly elected member of the board, replacing Trustee Gavi Hoffman, who did not seek re-election, while Byars Cole will serve on the school board for a second time after a short absence.

“I’m relatively new to the community,” Blass said. “We’ve been here for two years. I’m coming out of a 40-year career in finance and accounting, but most of my family has backgrounds as educators, school psychiatrists and roles like that. When I retired, I thought about the next place I could add value to the community, and this seemed like a natural fit.”

West Hempstead residents passed a $71.1 million school budget by a slim 174-vote margin on June 21. The board’s first proposal was rejected on May 17, the only school budget on Long Island to be voted down.

The various battles over the budget this year were fresh in Blass’s mind. “It’s obviously been a major issue in the community,” he said. “I think a major factor is the tension between private versus public schools. Many people send their kids to private schools. We have a large retired community. Everyone understands the need for a strong public school system, but they want to feel like they’re getting value out of their homeowner property taxes.”

“Two or three percent [budget] increases may not seem like much, but times are hard and people less fortunate need to watch every penny,” Blass said.

Blass said he volunteered to be the board’s community and private liaison, and hopes to find common ground on budgets in that role. “With my background in finance, hopefully I can try and find areas where things can be more efficient, but I’m also in a position where I can explain to the community what can and can’t be done,” he said.

“I think there’s some misunderstanding on both sides,” Blass added. “But there’s no need for this rancor. Going forward we should be walking hand in hand with the community, and hopefully see where the district can provide more value where possible.”

In addition to budget issues, Blass said he hopes he can help expand the school district’s special needs programs and offerings.  “As the father of a special needs child, support for the special needs community is a high priority,” he said. “We’ve done a pretty decent job, but I plan to take a look at what kinds of additional supports are feasible to ensure our special education students can become productive members of society, either handled internally or through BOCES.”

Joining Blass on the school board is Cole, who is beginning his second stint as a West Hempstead trustee. Cole was appointed to the board in 2017 after the resignation of trustee Rudolf Schindler, with that term ending in 2019. Asked about why he chose to return, Cole said, “They needed people to serve. I believe in public service. I believe in public education. I’ve got an investment in this community as an 18-year community member. I’ve had two children go through the public schools. I’ve had one go through the private school system. So I was happy to step up.”

Cole also expressed his intention to build trust regarding school budgets in the future. “Burt and I have been talking about this for the last few weeks and we’re going to work together over the next year about it,” he said.

“It’s all about communication and understanding. I think that there is always a question of transparency. I believe there is a lot of transparency, but it takes a lot to be able to see the complications and the complexities of this school budget.”

“We’ve recently got the pre-K going and we’ve added an additional class to make an eight-period day, so I’d like to see those efforts continued and expanded,” he said. “But I also want to expand our advanced placement offerings, help the high schoolers graduate with college credits, and strengthen our affiliations with colleges to make sure our students are leaving this system with the greatest possible opportunities.”

Cole also said he would encourage greater community participation in the coming year. “I’d love to see more community involvement,” Cole said. “Lets get community members involved in committees, get them showing up to board meetings, and joining PTA and SEPTA.”

In addition to Blass and Cole, school board president Karen Brohm was sworn in to her fifth term on the board. Trustee Joseph Maragaci will assume the position of board vice president, and district clerk Theresa Bryant was tapped to continue her role.