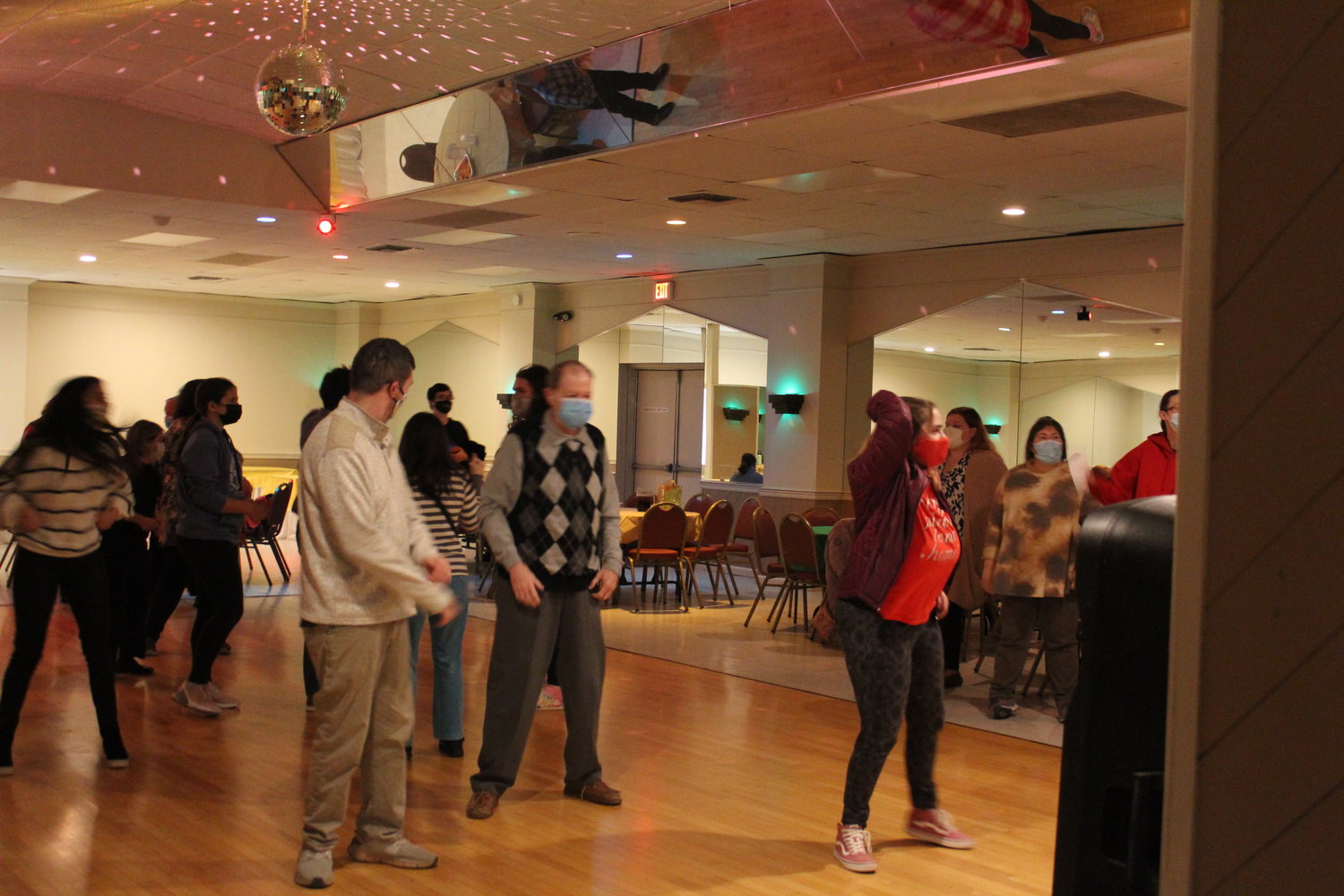 ANCHOR teens and adults dance in the banquet hall of the American Legion Post 854.
Karina Kovac/Herald

We support these children and these adults.”
Jose Santana Vice Commander, American Legion
By Juan Lasso and Karina Kovac

The Valley Stream American Legion Post 854 hall hosted residents from the Town of Hempstead’s ANCHOR program for a night out on the town of dinner and dancing last Friday. ANCHOR stands for Answering the Needs of Citizens with Handicaps through Organized Recreation, a comprehensive year-round program serving over one thousand children and adults with special needs who reside in the Town of Hempstead. For 40 years, the American Legion has held the ANCHOR dance for handicapped teens and adults to enjoy themselves while being a part of the wider community. Boy Scout Troop 116 and Girl Scout Troop 99 assisted as a service troop, helping to prep the banquet hall for the dance as well as dishing out refreshments to guests.
Program participant Danielle Palermo says she likes the many ANCHOR camp activities they have and is happy to see her friends at this year’s fall activity dance hosted by the Legion. Tonight, is not the first ANCHOR dance she’s attended, stating she “loves to party.”
MaryAnn Hanson, the Coordinator of the Town of Hempstead ANCHOR Program, explained that what makes the dance special is leaving Lido Beach, the program’s base of operations, and venturing out into a different location in the Hempstead community. “They feel special because they’re in a [more mature atmosphere]…a place where their parents might go…It’s very important because our normal dances are at our own center, so when they go out to dance, it’s like they’re going out to a big occasion,” said Hanson.
Socialization and connection are one of the driving forces behind events such as these, according to Hanson. “We have over a thousand participants. One of our biggest missions is to introduce our population to the community. So, dances like this where the American Legion sponsors it; they’re around the American Legion people; they’re around the Boy Scouts who help work it—it’s fabulous for our kids and it’s fabulous for the community,” said Hanson. “It’s a pleasure to be here.”
Jose Santana, a Vice Commander at the American Legion, started his involvement in the ANCHOR dance 5 years ago. He stated that the first time he hosted the event, it invigorated his spirits to see how happy everyone was. “It was a really good experience for me because [of] their reaction to the lights, to the music, to the food. The fact of the matter is they don’t get this on a regular basis. So, if we can get to them once a year, I think it’s a great thing to do and we enjoy doing it.”
Last year, because of Covid, the event didn’t take place, but Santana was happy when he got the word that the Legion could host an in-person dance this year. “It’s a great thing because we get to actually witness their faces as they’re walking in and as they’re enjoying the night. It’s an amazing feeling,” said Santana. Bridging together the relationship between ANCHOR and the American Legion, Santana concludes: “This is the American Legion…We support these children and these adults, and we support anything that has to do with the community. We love our community.”