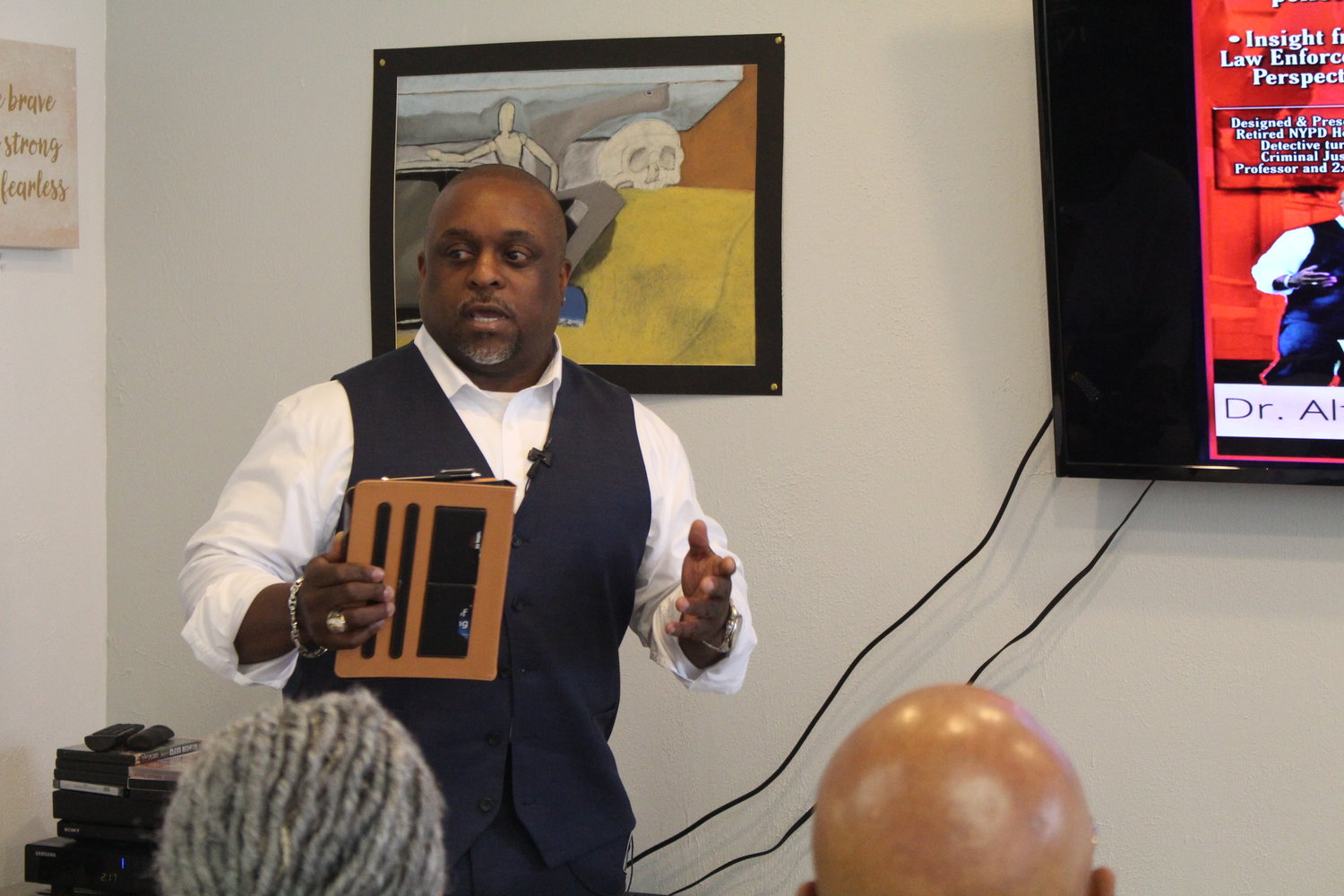 Dr. Alfred Titus, a former New York City Police Department homicide detective and hostage negotiator who is now an author and professor, shared tips on how to safely interact with police at an informational seminar on June 30 at 3D’s Community Empowerment Center in Baldwin.
Bridget Downes/Herald 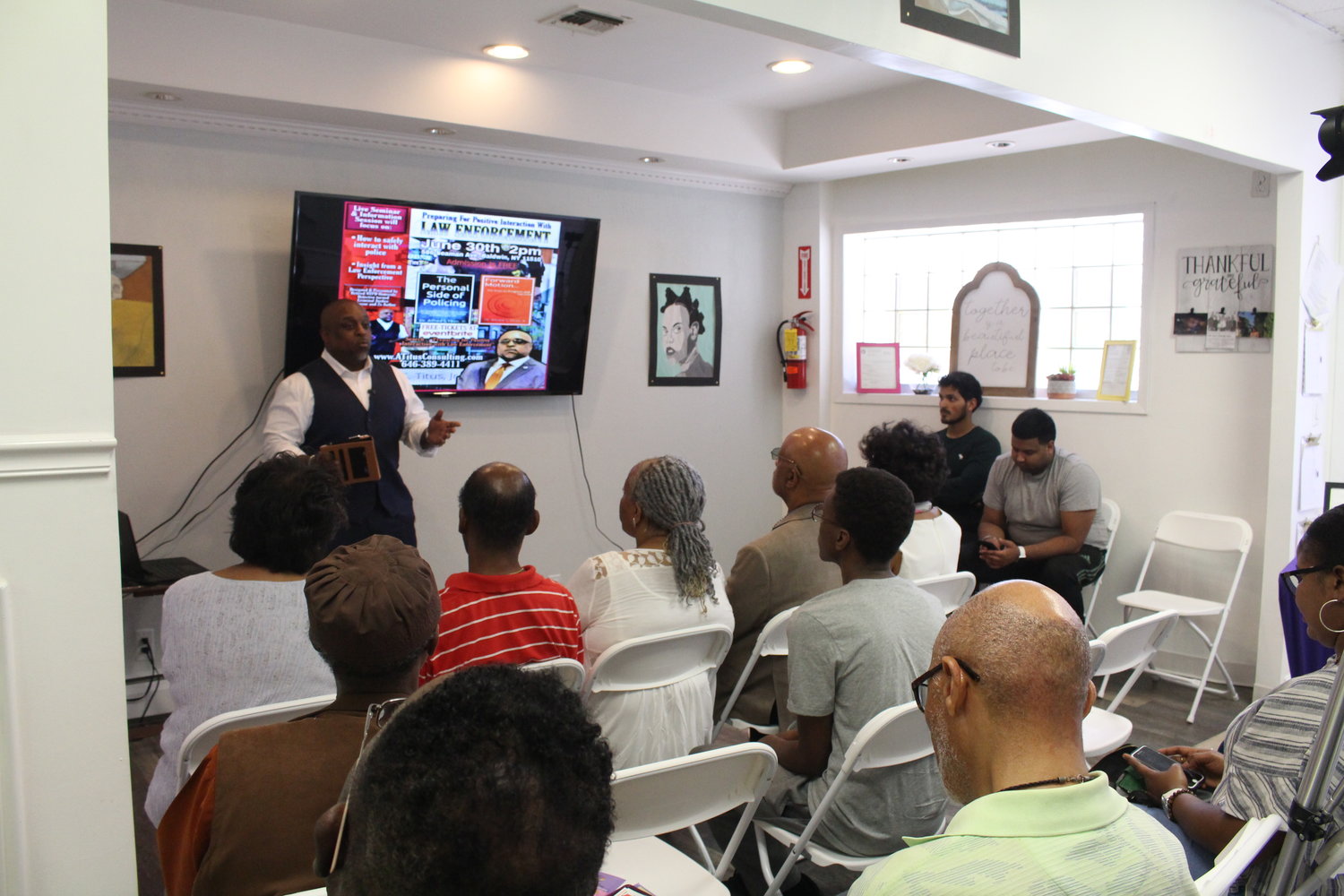 Why is it that the police departments aren’t taking the initiative to do what he’s doing? There’s greater outreach that’s needed.”
E. Reginald Pope, president of the Nassau County chapter of the National Action Network
By Bridget Downes

Titus, an author and criminal justice professor at John Jay College who worked in law enforcement for 23 years, hosted a seminar on June 30 on how to interact positively with police at 3D’s Community Empowerment Center in Baldwin.

He has written two books, “Forward Motion” and “The Personal Side of Policing,” and founded an organization called A. Titus Consulting, conducting private investigations and making a motivational speaking tour around the country. Titus said the recently released “The Hate U Give” and “When They See Us,” a movie and drama miniseries, respectively, sparked conversations within the police community and inspired the informational session.

“You need to see both sides of the situation,” he said. “That’s a different perspective that I feel I have, being African-American, born and raised in South Jamaica, Queens, becoming law enforcement and following through with my education. I’ve seen all sides, the complete circle of these situations that are going on.”

Some 1,093 people were shot and killed in the United States by police officers in 2016, according to The Counted, a database compiled by The Guardian. In the same year, 64 police officers in the U.S. were killed by gunfire in the line of duty, according to the Officer Down Memorial Page Inc., a national nonprofit organization dedicated to honoring the country’s fallen law enforcement officers.

Titus shared tips on what to do at a routine traffic stop that “would lessen the threat level that the police officer feels” in order to come out of the situation safely.

If stopped by police, he said, you should remain calm, control your words, emotions and body movements, and communicate clearly.

“If the officer asks you for ID, say I’m going to get my ID, it’s in my wallet or it’s in my glove compartment,” Titus explained. “Communicate in that way so that he knows what you’re doing. [The officer’s] guard is up because he’s about to enter a situation that he’s not sure of.”

Roll the car’s windows down, especially if they are tinted, turn off the car, place the keys on the dashboard and hands on the wheel at 10 and 2, he explained. If it’s nighttime, turn on the interior lights.

If the officer is demanding and rude, Titus suggested contacting the local precinct and submitting a complaint, adding that the street is not the place to handle it.

“Your goal, just like the officer’s goal, is to get home,” he said. It’s “to end that situation and get back home to your families.”

E. Reginald Pope, president of the Nassau County chapter of the National Action Network, a nonprofit civil rights organization, said after the seminar that Titus’s presentation was “much-needed,” but needs greater exposure.

“Why is it that the police departments aren’t taking the initiative to do what he’s doing?” Pope asked. “There’s greater outreach that’s needed.”

A Nassau County police public information officer said he is unaware of such seminars for the general public that are regularly held.

“It’s good to reach out to the community,” said Deepak Kumar, one of Titus’s students at John Jay, after the seminar. “It’s a nice first step because one person learns something, they can spread it out to other people, and then they can keep spreading” the word.