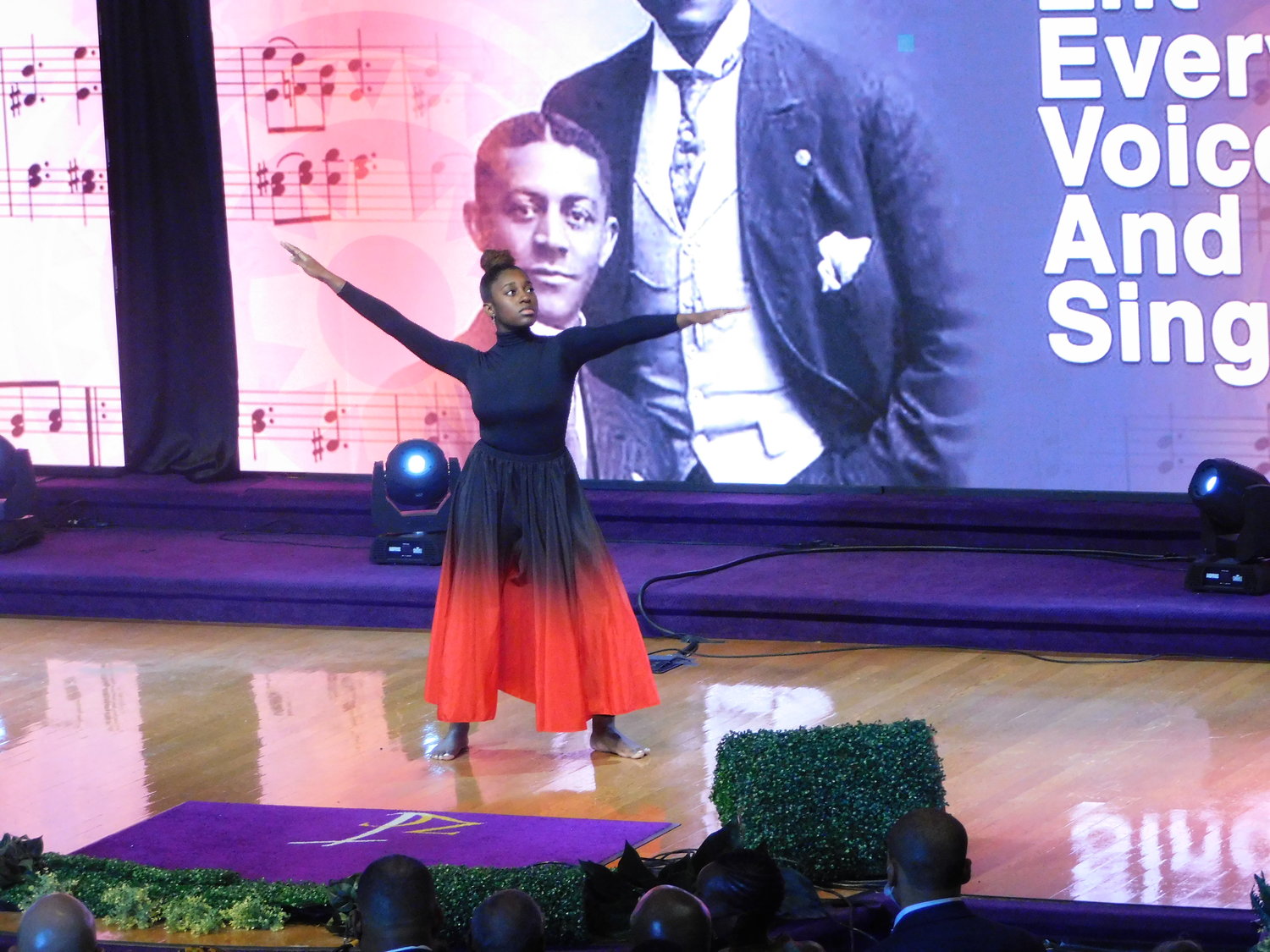 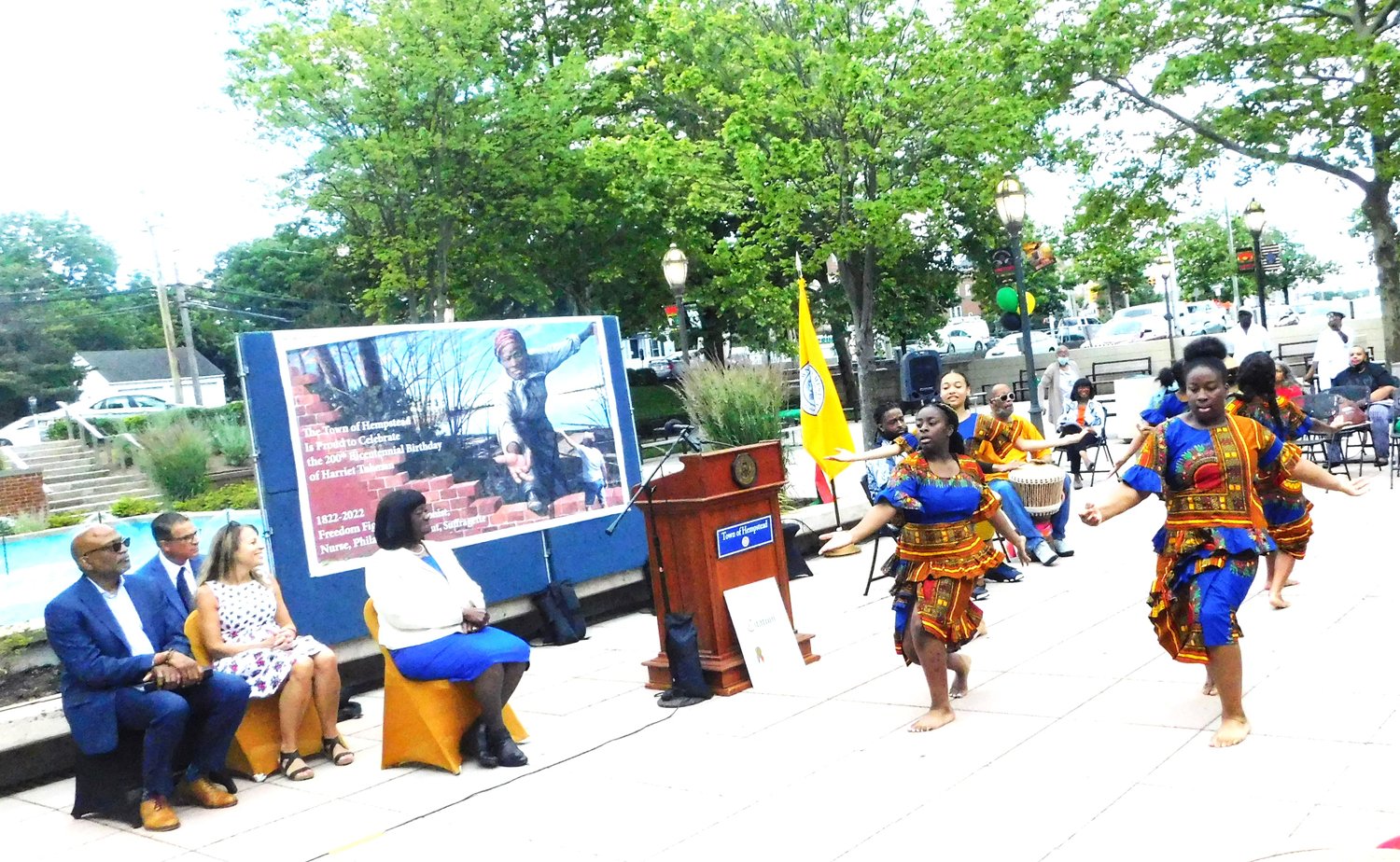 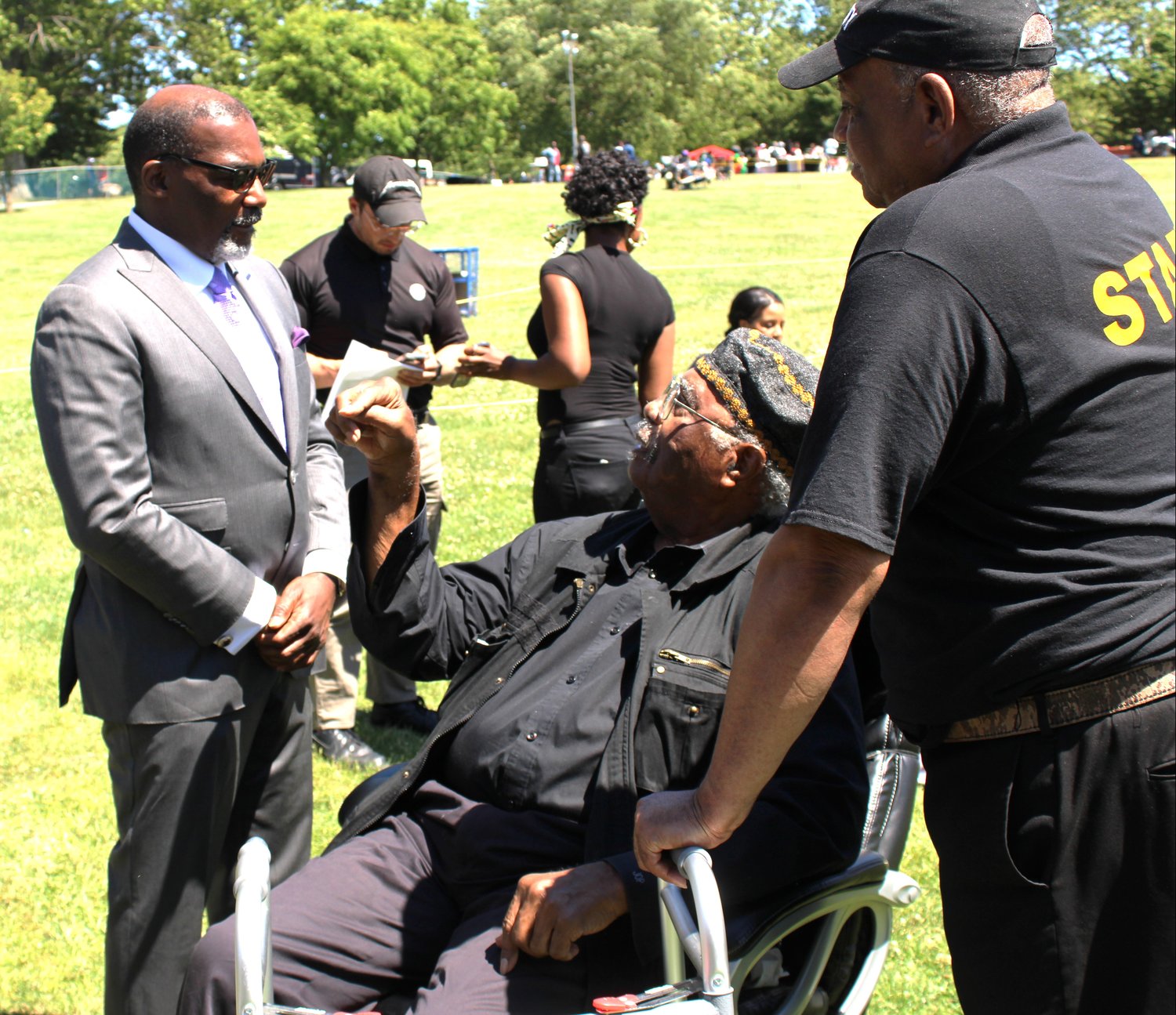 Bishop Frank A. White of Zion Cathedral in Freeport, left, with Julius Pearse, center, director of the Joysetta and Julius Pearse African American Museum of Nassau County, and his son Gary, who has joined the museum staff.
Courtesy Brandon Allen

Lynnette Carr-Hicks conducted the Rhythm of the Knight, the show choir of the Uniondale High School Chorus, at the Juneteenth festival, which was sponsored by Black Legacy Partners in Hicksville.
Reine Bethany/Herald
Previous Next
By Reine Bethany

More and more people know the answer to that question nowadays. In the past two years, festivals have sprouted nationwide to celebrate June 19. New York state made it an official state holiday in October of 2020. Eight months later, President Biden signed a bill making the date a federal holiday.

On June 19, 1865, Union Major-General Gordon Granger brought the news that all slaves were freed to the last Confederate holdout in Galveston, Texas — more than two years after President Abraham Lincoln issued the Emancipation Proclamation on January 1, 1863. Because the Union enforcement of the proclamation spread so slowly across America’s states and territories, African-Americans coined the word “Juneteenth” to establish a day celebrating their freedom from slavery.

In Freeport, the Town of Hempstead and Nassau County, Juneteenth was commemorated widely.

Bishop Frank A. White and the congregation of Zion Cathedral combined Father’s Day and Juneteenth, which coincided this year.

In a program on Saturday night, the church mixed dance, song and poetry with the presentation of the Ubora Awards, honoring 12 high-achieving Black men in Freeport and the surrounding area. “Ubora” is Swahili for “excellence.”

Area activist and businesswoman Shelley Brazley delivered a tribute to the men being honored, and to the Black men of America who, over the centuries, have faced persecution and death in the fight for equality.

“Whereas we have intentionally set aside this time to celebrate you,” Brazley said, “you, our brothers, are the epitome of Black excellence. Your strength, your intellect, resilience and brilliance are an inspiration to us. Doing your absolute best is never good enough for you. You strive to surpass your own expectations.”

Julius Pearse, a Freeport resident since 1962, figured prominently in the festival hosted on Sunday by Nassau County at the Harry Chapin Lakeside Theatre in Eisenhower Park.

Pearse, 89, became Freeport’s first Black police officer in the early 1960s. He and his wife, Joysetta, who died last June, actively promoted the commemoration of Black achievement, ultimately becoming the directors of the African American Museum of Nassau County.

The couple were honored in May 2021, when their names were added to the museum title.

Speaking from a chair on the lawn in front of the theater band shell, Pearse said, “At the African American Museum, we have dedicated ourselves to producing hidden history, and finding historical facts about Black inventors and business people that you would not find in a history book. This country would not be where it is today if it had not been for the hard work and dedication of people of African descent.”

The festival was sponsored by County Legislators Siela Bynoe, Kevan Abrahams and Carrié Solages, and featured remarks from prominent Black leaders, a children’s African dance troupe, the voices of the Rhythm of the Knight show choir, from Uniondale High School, and music by jazz trumpeter Everton Bailey and his group the Instrumental Sounds of Praise.

Attendees sat on the sunny hillside sloping down to the theater, or browsed colorful vendors’ tables. Among the vendors was a former Freeport villager named Jerie Gross, who graduated from Freeport High School in 1996. She was accompanied by her sisters, Jamisha Gross (class of 1992) and Jeannie Gross (class of 2003). Jerie established a business in 2015 selling imported Italian shoes, and has recently added sports apparel to her lineup.

After the program, Bynoe said that the county administration had been slow to support the festival, and had not acted on her bill to make Juneteenth a county holiday.

Every other municipality in the area has made the holiday official, Bynoe said, including the towns of Oyster Bay, Hempstead and North Hempstead and the City of Long Beach.

“Nassau County has yet to call the bill that I submitted back in February,” said Bynoe. “So there’s always more work to be done.”

Senior Councilwoman Dorothy Goosby, who is now the deputy town supervisor, well known for her civil rights activism, hosted the Town of Hempstead festival on Saturday.

Goosby was recently elevated to deputy town supervisor by the Town Board. Her councilmanic district includes Freeport.

Boy Scouts Troop 300, which meets at historic St. George’s Church, across Front Street from Town Hall, led the Pledge of Allegiance for the program, and two Eagle Scouts shared their thoughts on the meaning of Juneteenth with the Herald. Hempstead resident Victor Pulito, 20, said that joining the troop years ago made him feel comfortable, because it was mostly Black, but also Hispanic.

“I didn’t know much about Juneteenth until I joined the troop and we started celebrating it as a whole,” Pulito said.

Baldwin resident Gregory Allen, 23, said Juneteenth was a day for every minority to celebrate, “because everybody’s struggle matters.”

Audience member and Roosevelt resident Barbara Bailey, 82, said she learned about Juneteenth from a memorable teacher during her high school years in Inwood. Her mother, Louistine Morton Bailey, was the first woman of color in their area to become a census worker.

Asked what she thought about the new prominence of Juneteenth, Bailey said, “I think it’s wonderful, wonderful. All my nieces and nephews, grandnieces and grandnephews, I’m collecting materials to pass on to them.”

When the program began, Goosby oversaw the raising of the Juneteenth flag next to the American flag that fluttered over Senior Councilwoman Dorothy L. Goosby Plaza, where the event took place.

“Juneteenth means the ending of slavery and the promise of a brighter morning to come,” Goosby said. “It is also an opportunity to remember those who fought for the abolition of slavery and equality for all.”

Goosby spoke of the late Rev. Ronald S. Myers Sr. a doctor who is credited with spearheading the movement to make Juneteenth a national holiday, and 95-year-old Opal Lee, an American teacher who is often called the grandmother of Juneteenth. Lee was in attendance at the event.

Poet Phaedra McDowell read her “Ode to Freedom: A Juneteenth Tribute,” which included the words, “Freedom, though you were delayed, you were not denied. … Freedom! You belong to us.”

The words set the tone for the speakers, dancers and musicians who followed.

Black Legacy Partners formed in 2020 to support Black culture and business. It held its second annual Juneteenth Cultural Festival at the Hicksville station on Sunday, with more than 40 vendors, as well as musical performers and speakers.

The Uniondale High School show choir performed at the event (in addition to the county festival in Eisenhower Park and a festival in the Hamptons).

Uniondale High School senior Jayden A. Alce, a three-year show choir veteran, said, “An event like this means a lot, representing people around here with different kinds of cultural backgrounds, so definitely a homey kind of vibe.”

“We’re one of the first minority choirs around here to travel and win competitions,” said operatically trained Uniondale High School junior C.J. Allen, “so it’s good to be around here and celebrate our culture.”

Freeporter Zakiya Cush, a Black Legacy Partners fan, displayed bakery products from her business, Grand-Mère. “I love honoring what they’re doing,” Cush said, “bringing the community out and just kind of showing the light on female entrepreneurs like myself and Black-owned businesses.”