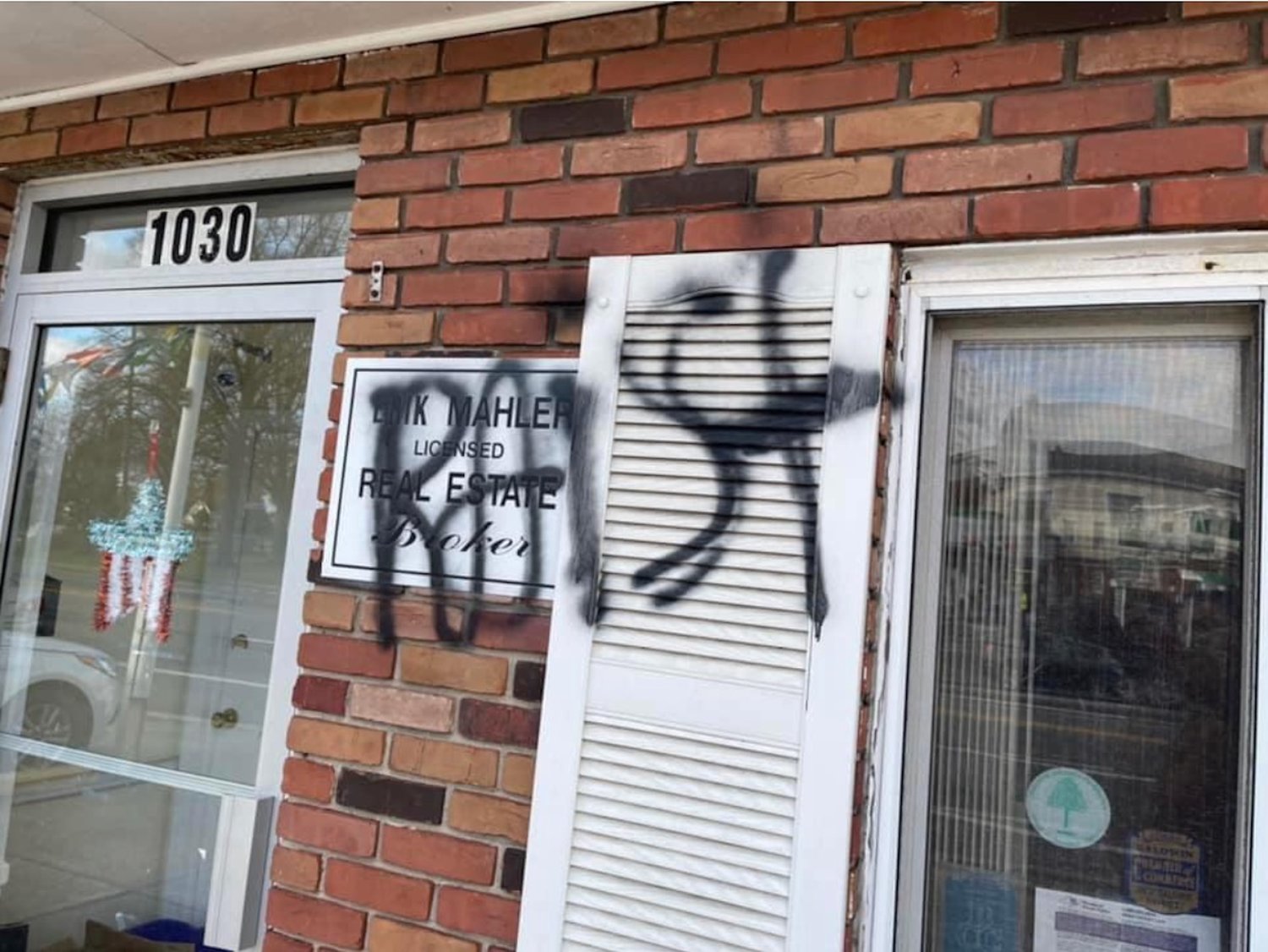 The word “Raist” — a misspelling of “racist” — was graffitied on the front entrance of Mahler Realty on Merrick Road in the early hours of Nov. 27.
Courtesy Erik Mahler/Facebook 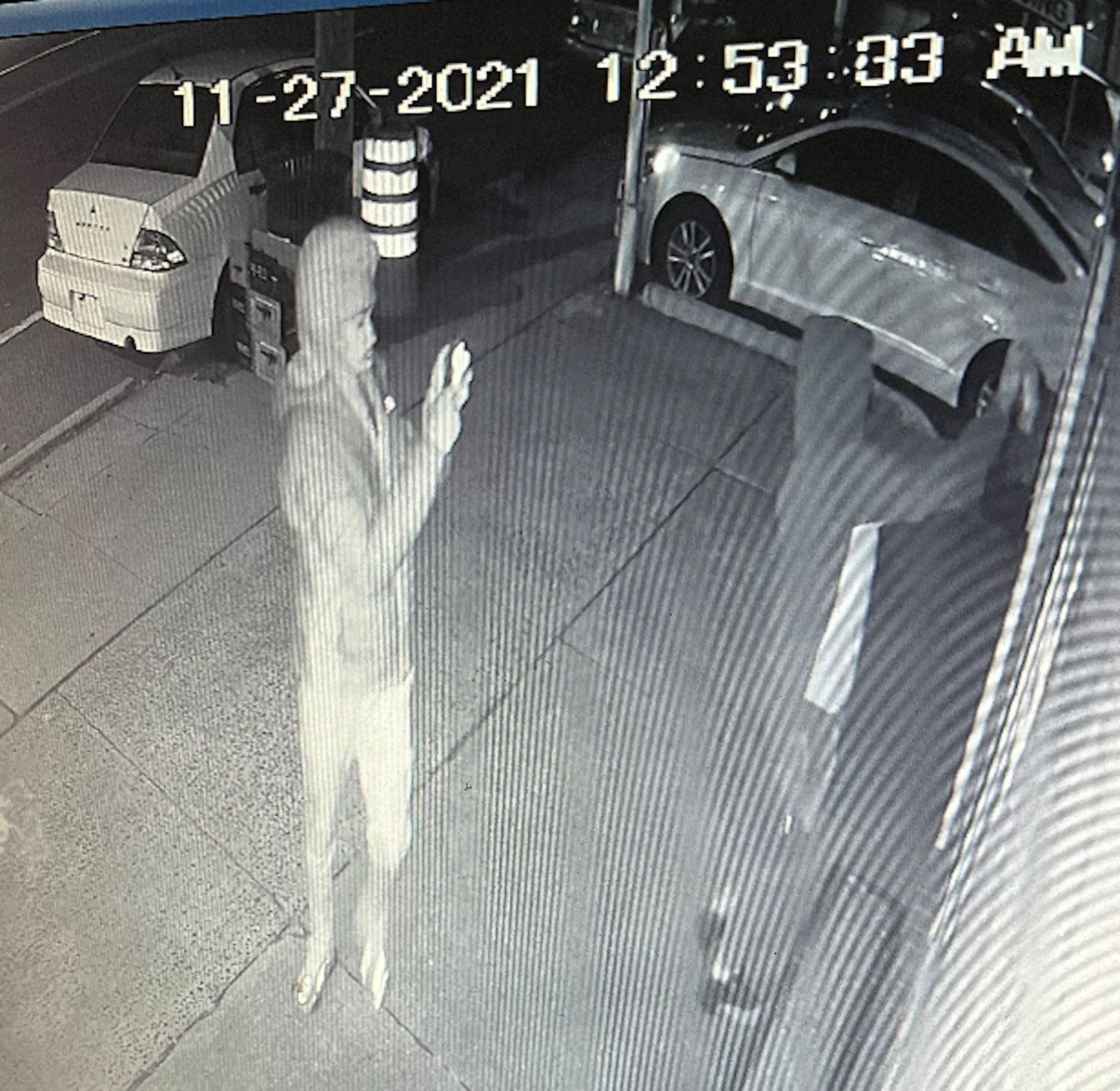 Police collected a video captured by the surveillance camera at the business, which shows one individual spray-painting the front of Mahler’s office and another recording or taking photos with their phone.
Courtesy Erik Mahler
Previous Next

We, as a community, agree violence and destruction of property is no way to solve disputes.”
Darien Ward, BCA president
By Cristina Arroyo Rodriguez

In the early morning of Nov. 27, the business office of Erik Mahler, a former Baldwin Chamber of Commerce president and local realtor, was graffitied with “RACIST."

“Well, I was going to put up Christmas decorations, but now I have to clean this off my office,” wrote Mahler, who co-owns his intergenerational family business with his wife, Tracy, in a Facebook post.

The Mahlers reported two incidents of graffiti to police that day, one at his office and another at his home, both of which had never been vandalized before, according to Erik Mahler.

Police also collected a video captured by the surveillance camera at his business, which shows one individual-spray painting the front of his office, another recording or taking photos with his phone and the white four-door sedan they used to leave.

The Mahlers are offering the perpetrators and their parents an opportunity to clean up and fix what they damaged, but they are also offering a reward for their arrest and conviction.

After reporting the incidents to police, Tracy Mahler said on social media that she believed Baldwin High School students were involved. And she wrote that the Mahlers’ daughter, who attends the school, had received physical threats, which she said she witnessed, prompting her to keep her daughter home for two weeks.

In two social-media posts, Tracy Mahler further said she believed the graffiti was a part of an unofficial scavenger hunt conducted by Baldwin High students.

Because the Baldwin School District has not been contacted about the vandalism incident, and because there is an ongoing investigation into it, a district representative could not comment on it.

Superintendent Dr. Shari Camhi and the board shared a letter with the community the Thursday after the incident, citing the social stress of the pandemic and the high expectations of students, before cautioning about the spread of misinformation online: “Please remember that everything you read or see online is not always true.” It was a message that was also addressed at recent school board meetings.

Once abreast of the situation, Baldwin Civic Association President Darien Ward published a statement on social media, stating, “We, as a community, agree violence and destruction of property is no way to solve disputes.” And from the group’s own information gathered, it attributes the vandalism to a seeming “youthful indiscretion.”

Likewise, new chamber President Franky Jorge told the Herald that the chamber “always condemns any form of vandalism.” He also said the group was not aware of an uptick in vandalism at Baldwin businesses recently, and that the protocol is to call Sanitation District No. 2 quickly in instances of graffiti.

In 2019, Sanitation No. 2 workers teamed up with the chamber to remove 23 graffiti scrawlings around Baldwin, South Hempstead and Roosevelt. A sanitation district representative said there has not been an increase in graffiti incidents in recent weeks and months.