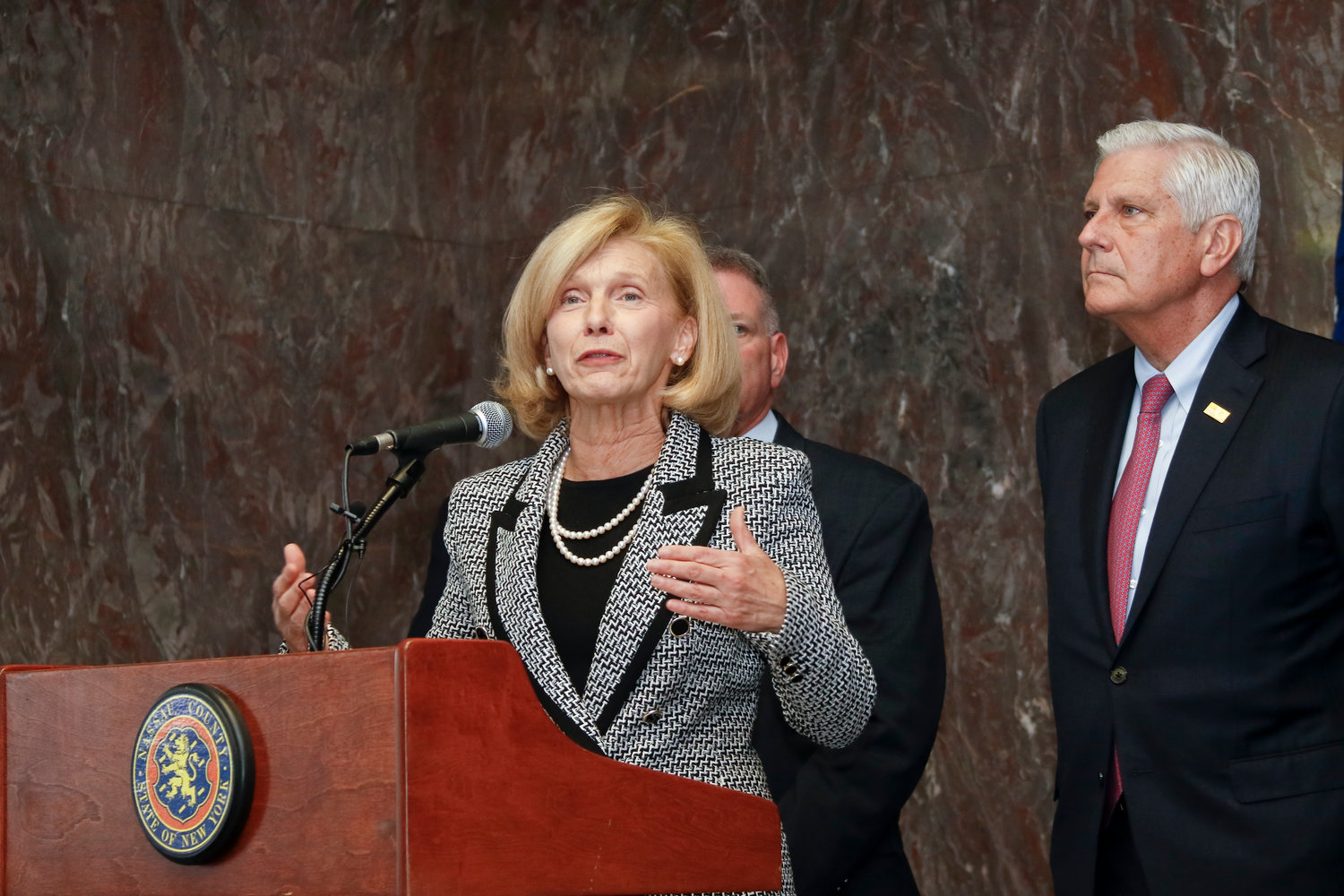 Nassau County Comptroller Elaine Phillips said she will begin her independent audit of the Department of Assessment and the tax reassessment done under the Laura Curran administration on Feb. 15.
Christina Daly/Herald 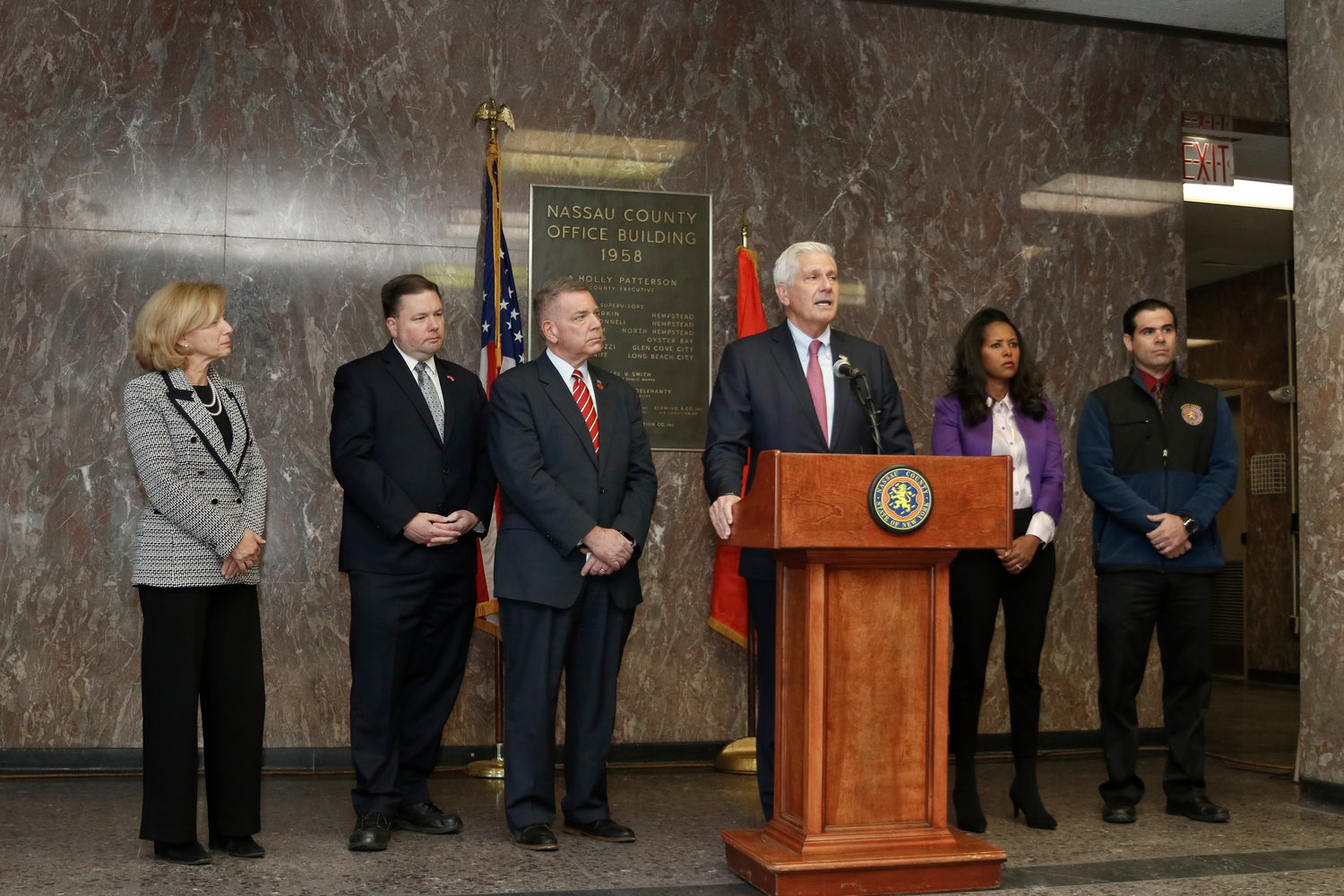 County Executive Bruce Blakeman (center) promised to keep his office and the Legislature out of the audit process.
Christina Daly/Herald
Previous Next
By Tom Carrozza

Nassau County Comptroller Elaine Phillips said she will begin an audit of the Department of Assessment on Feb. 15. Joined by County Executive Bruce Blakeman, who campaigned on transparency and change for the reassessment, Phillips reiterated her own promise to independently investigate the reassessment process and how to improve it.

Th audit will be Phillips’ first as comptroller and will focus on better understanding the re-assessment done under former County Executive Laura Curran in order to make changes going forward. Phillips said that the first task will be to audit the 2021 tax roll to see the methodology and process that was done for the mass appraisal.

“When you go in and do an audit, you have to keep an open mind,” Phillips said. “Depending on the information that you find, the audit could evolve.”

Phillips said the audit will seek to discover whether exemptions were applied correctly and how the five-year phase in may have affected the tax roll.

In March 2020, the Legislature passed the Reassessment Phase-In Act with a five-year phase in for changes to a homeowner’s assessed value from their 2019/20 market value to the 2020/21 roll. An exemption base was then to be determined by taking the increase and multiplying it by .1 percent. In the first year of the reassessment, 80 percent of the exemption base was to be subtracted from a homeowner’s total assessment. Each year the percentage was to drop by 20 percent until the new values were fully implemented in 2024/25.

Blakeman said that he has found identical properties in places like Massapequa where one home was assessed at 40 percent more than the other. “My predecessor engaged in a reassessment that wasn’t transparent and wasn’t done in a way that was fair to all the residents of Nassau County,” he said. “And because it wasn’t transparent, we still don’t know everything that went wrong.”

Blakeman said that the information that comes from Phillips’ reports will be relied upon heavily for a decision-making process. He also said that the county executive’s office and the Legislature will have no input, which will enable Phillips to have an independent review.

Legislator Steve Rhoads, the chair of the new legislative committee for assessments, was also in attendance with vice chair Legislator John Ferretti.

“What we wanted as a legislative majority was a process that was fair, that was accurate, and that was transparent,” Rhoads said. “Unfortunately, what we received of the course of the last four years was anything but.”

Rhoads decried a lack of transparency during Curran’s administration which saw many homeowners sue to find out how the algorithm used by the Department of Assessment calculated their home’s value.

Phillips cautioned that this audit would take time, as the audit of the assessment review commission was published in December 2021 after three and a half years. She plans to have her department publish a report after they complete their review of the 2021 tax roll but could not give a timetable yet as to when.

“I’m committed to transparency,” Phillips said. “I have my slogan that I am the independent protector of our taxpayers and I promise the people of Nassau County that I will live up to that.”