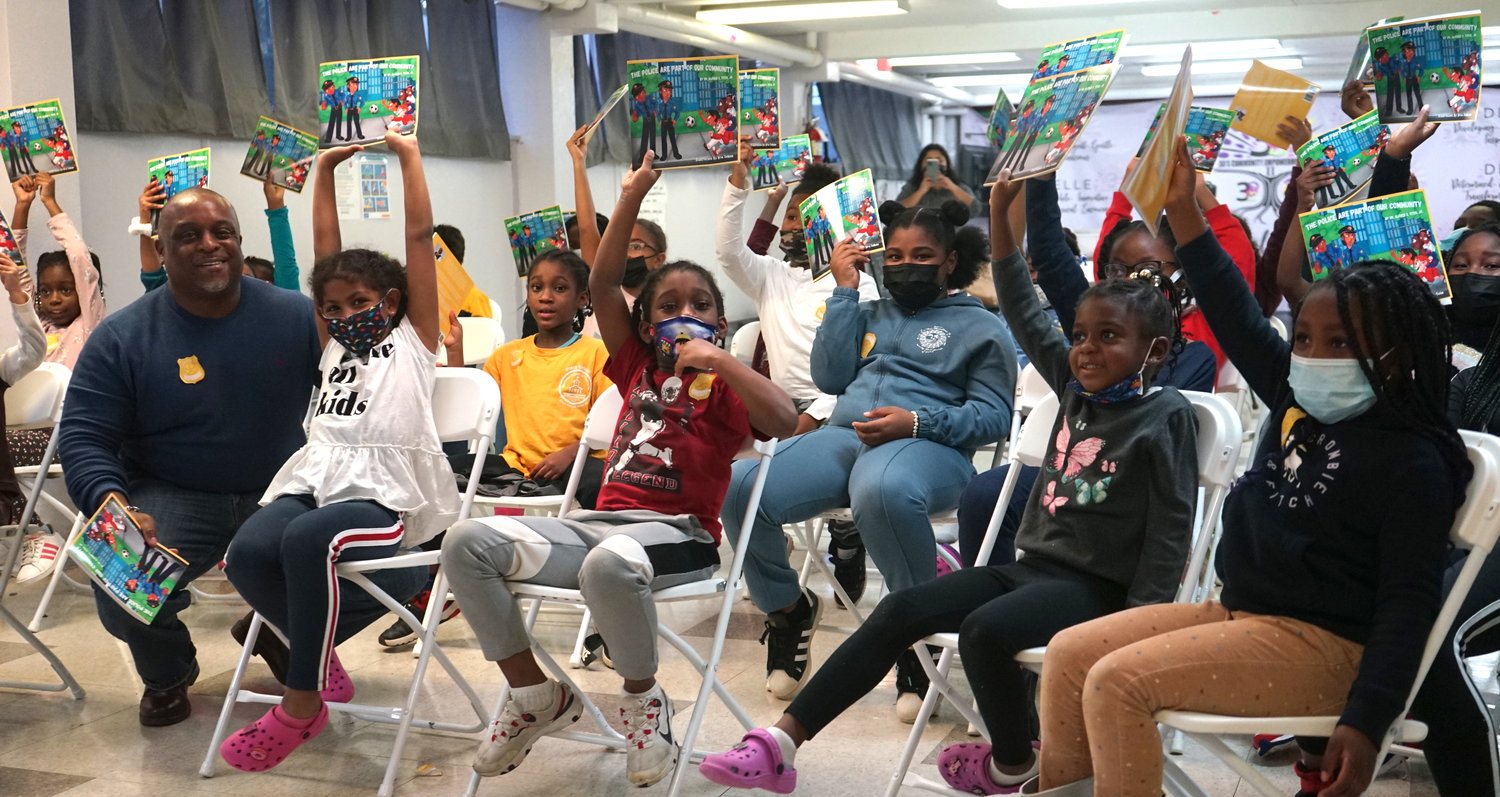 Dr. Alfred Titus, left, read his new children’s book about police to the children of the 3 D Aftercare in Baldwin, where he wanted to start the “talk” that many parents of color have with their children about the police.
Cristina Arroyo Rodriguez/Herald
Themes of “The Police Are Part of Our Community”

- Look at what police do in our community.

- Have the “talk” with your children about police.

- Recognize there are good and bad police officers.

“This book is written for the children growing up in a world where police and community conflicts occur far too often,” wrote Titus in the afterword of his book. As an African-American himself, he told the Herald that he wanted to write the book especially for children of color, as they are constantly exposed to negative messages around police and policing.

About two dozen children gathered on a rainy Thursday afternoon under the guidance of Dr. Zodelia Williams in a big room lined with chairs. They put on their “listening ears” as Titus read aloud from his illustrated book, fielding questions between turns of the pages, making for an engaging and interactive reading.

“Did you write this book?” asked one of the children as Titus introduced himself as an NYPD detective, college professor, entrepreneur and previously published author. “Read us your name on the cover to make sure,” another child asked, as if in doubt.

Titus read from his 35-page book, which is supposed to be a part of the “talk” many parents of color, especially in Black families, have with their children surrounding the history of racism in the United States stemming from slavery, and the current police-community dynamics, exemplified through the Ferguson protests, George Floyd murder and Black Lives Matter movement.

“If police stop your mom or dad, don’t be afraid, stay calm, listen carefully, be respectful, and follow directions,” read Titus slowly as many little hands went up in the crowd. “The police stopped my dad yesterday,” said one child, adding that the stop went well and everyone remained calm.

“It has to come from both sides,” said Titus repeatedly during his reading, referring to mutual respect and accountability between the community and police. He said the relationship between both of these parties has become so fractured that the healing has to come from both sides through education, representation and community policing initiatives.

The book shows police, parents and children from different races, centering people of color, which was intentional, according to the author. The first couple of pages features Asian, Black, Hispanic and Caucasian police officers, both male and female. “Boys and girls can become Police Officers. Police Officers can be of any race, color, or religion. Police Officers can be someone in your family,” Titus wrote.

Titus identified a lack of representation in the police department as another barrier to mending police-community relations. During his tenure as both a police officer and detective, he witnessed the pros and cons of being a Black member of the force.

He addressef these issues either directly or indirectly in his previous 2018 books for an adult audience, “The Personal Side of Policing: An in-depth look at how a career in law enforcement can change and affect your life,” and “Forward Motion...: The Keys to Progress and Success!”

The children also learned about police equipment, such as helicopters, drones and robots. When Titus read about how police use dogs in their investigations, a child raised her hand excitedly and asked, “Do police use cats, too?” Everybody shared a hearty laugh, as he explained that cats weren’t really used, as dogs are needed for their sense of smell and training ability.

At the end of the book, the author introduces policing terms and vocabulary words that he encouraged the kids to talk about with their parents, such as de-escalation, cultural awareness, community policing and professionalism. “Now go give this book to your parents or caregivers and ask them about these terms, which they may know or not know,” he said.

Titus recognizes the broader issues around the topic of policing, and told the Herald that he had been accused of “copaganda” online because he does not address systemic racism as the crux of the friction between people of color and police. However, the author explained that by no means is the book supposed to be exhaustive, but rather the start of a conversation. He foresees writing more children’s books to further evolve this controversial, but necessary conversation.