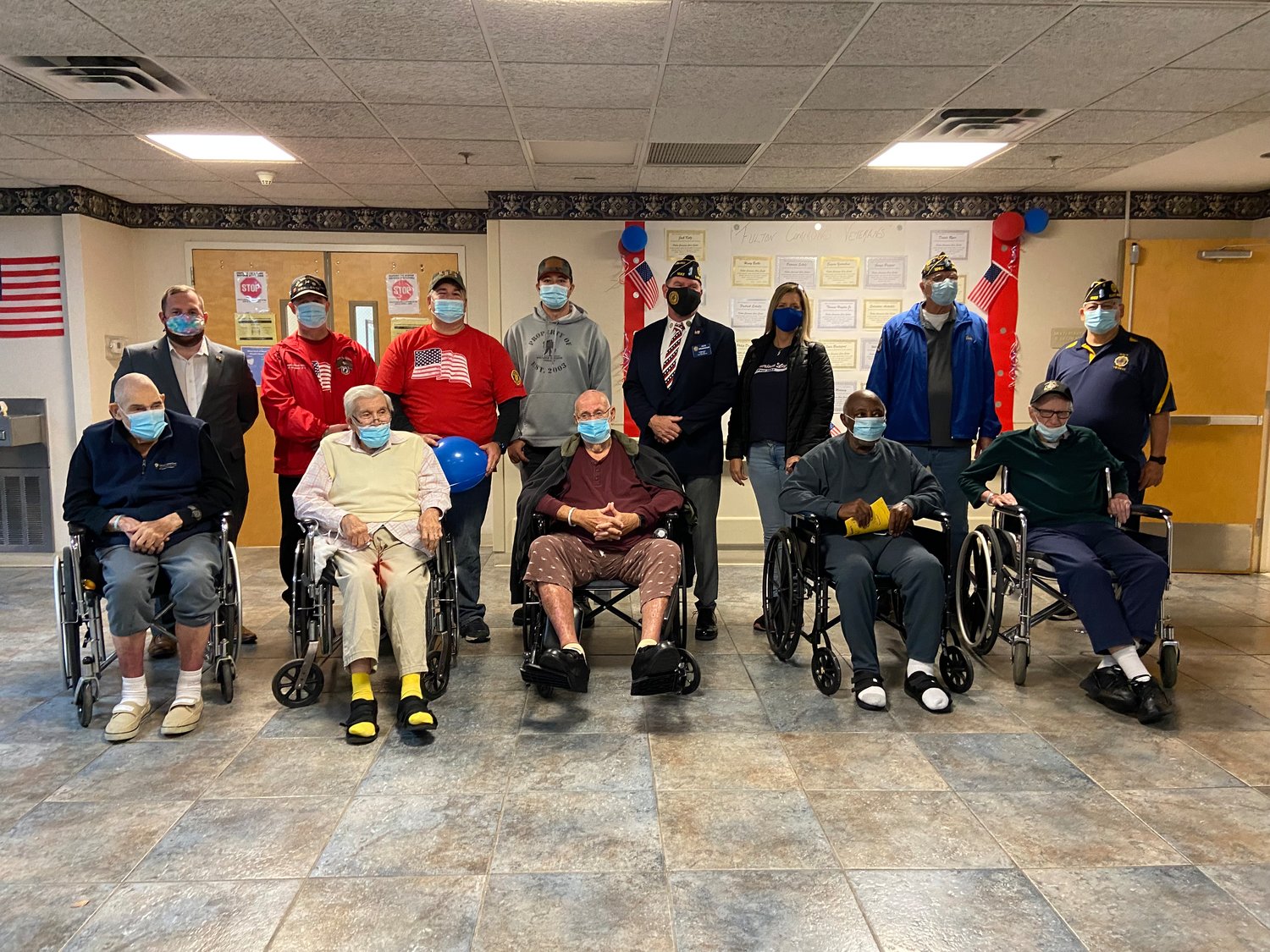 Members of the American Legion and the veterans from the center stood in front of the wall that Aaliyah Bilal made.
Mallory Wilson/Herald
By Mallory Wilson

The East Meadow American Legion Post 1082 donned their uniforms on Saturday to visit veterans at the Fulton Commons Care Center on Merrick Avenue in East Meadow. The E.M. crew went to thank the vets just two days after Veteran’s Day.

Veteran’s Day is a day for thanking those who served and honoring them and that’s just what the legion did.

Pete Wenninger, commander of the East Meadow American Legion Post 1082, kicked off the event by thanking everyone for their service.

“If it wasn’t for you gentleman and ladies who served and sacrificed for your country we wouldn’t have a country and we wouldn’t have any freedoms,” Wenninger said. “So good afternoon to all of our veterans near and some far away up in heaven.”

Wenninger mentioned to the onlookers that past East Meadow American Legion Commander John Devaney was also a resident of Fulton.

“I would like to dedicate this to the memory of him,” he said. “Without him, our post wouldn’t have survived its tenure.”

Wenninger spoke about the many sacrifices that those who served made. It doesn’t matter what position or branch you served in, Wenninger said. Everyone was important and did what they were told to do as members of the military.

“We are truly blessed, so thanks to you all,” he said. “Whether you were on the command post, the supply lines, or on the battlefield we owe a debt of gratitude to you and to everyone in your family.”

Those who attended the mini service were given cards that were made by East Meadow elementary school students, which made them smile.

“Thank you Pete for bringing us all together,” State Senator Kevin Thomas said. “In the state government, we want to do everything that we can for veterans and their families because you went out there and you risked your lives and your families put up with a lot to just give us the rights that we have and the freedoms that we have.”

Thomas, who immigrated to the United States when he was 10 years old, said he wouldn’t have been able to make it as far as he has in government if it wasn’t for veterans.

“I wouldn’t be standing in front of you as a state senator if it wasn’t for all of your sacrifices,” he said.

Wenninger then took a moment to explain the American Legion’s role. “Our politicians, they do a fine job but they need to know how they’re doing and any ideas you have is good to have,” he said. “And that is what we try to do at the American Legion. We try to lobby for vets and make sure we get the best of care because after all, we cared the best for our country.”