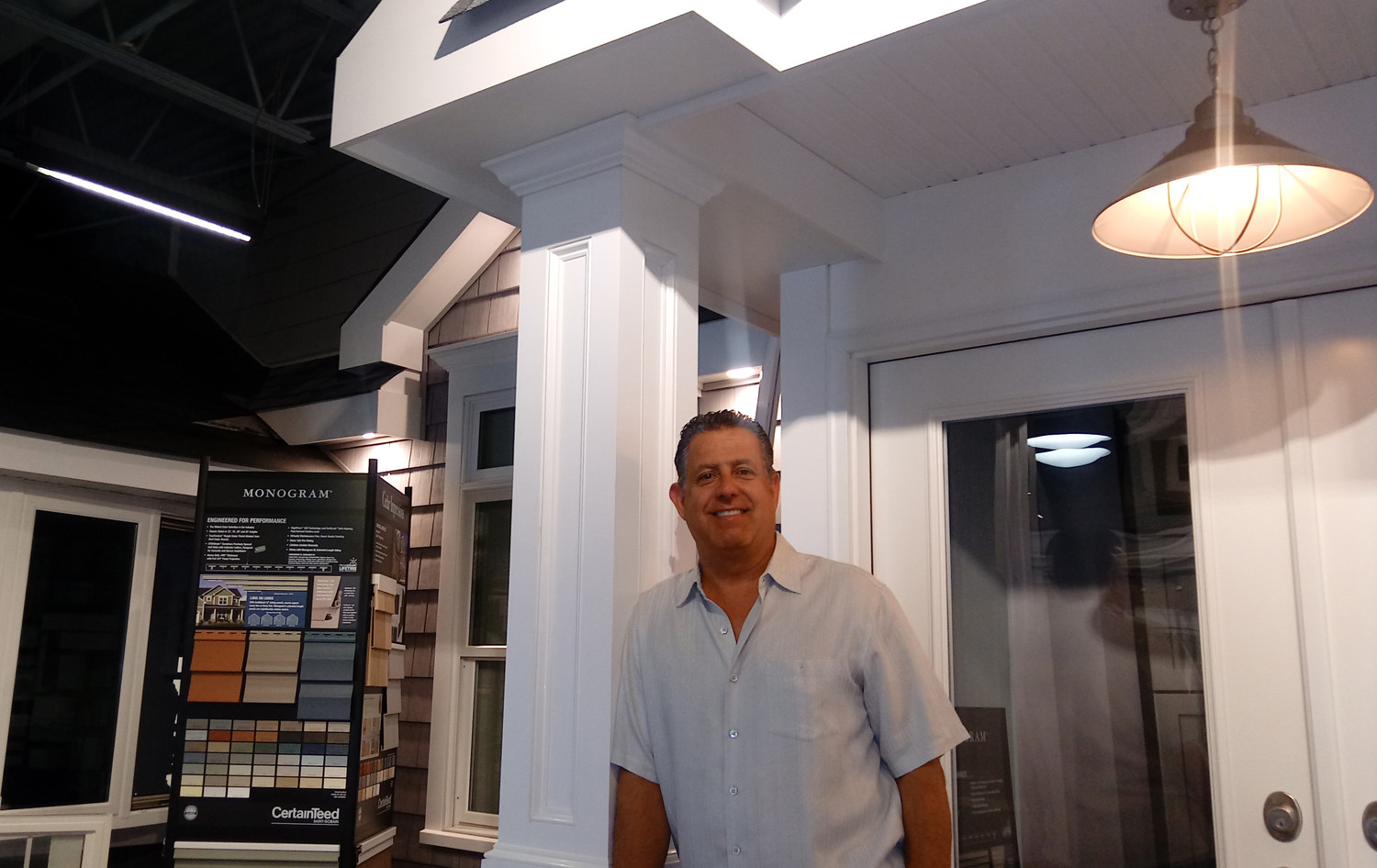 Sal Ferro, president and CEO of Alure Home Improvements, is especially proud of Alure’s showroom, which opened in 1991.
JENNIFER CORR/HERALD 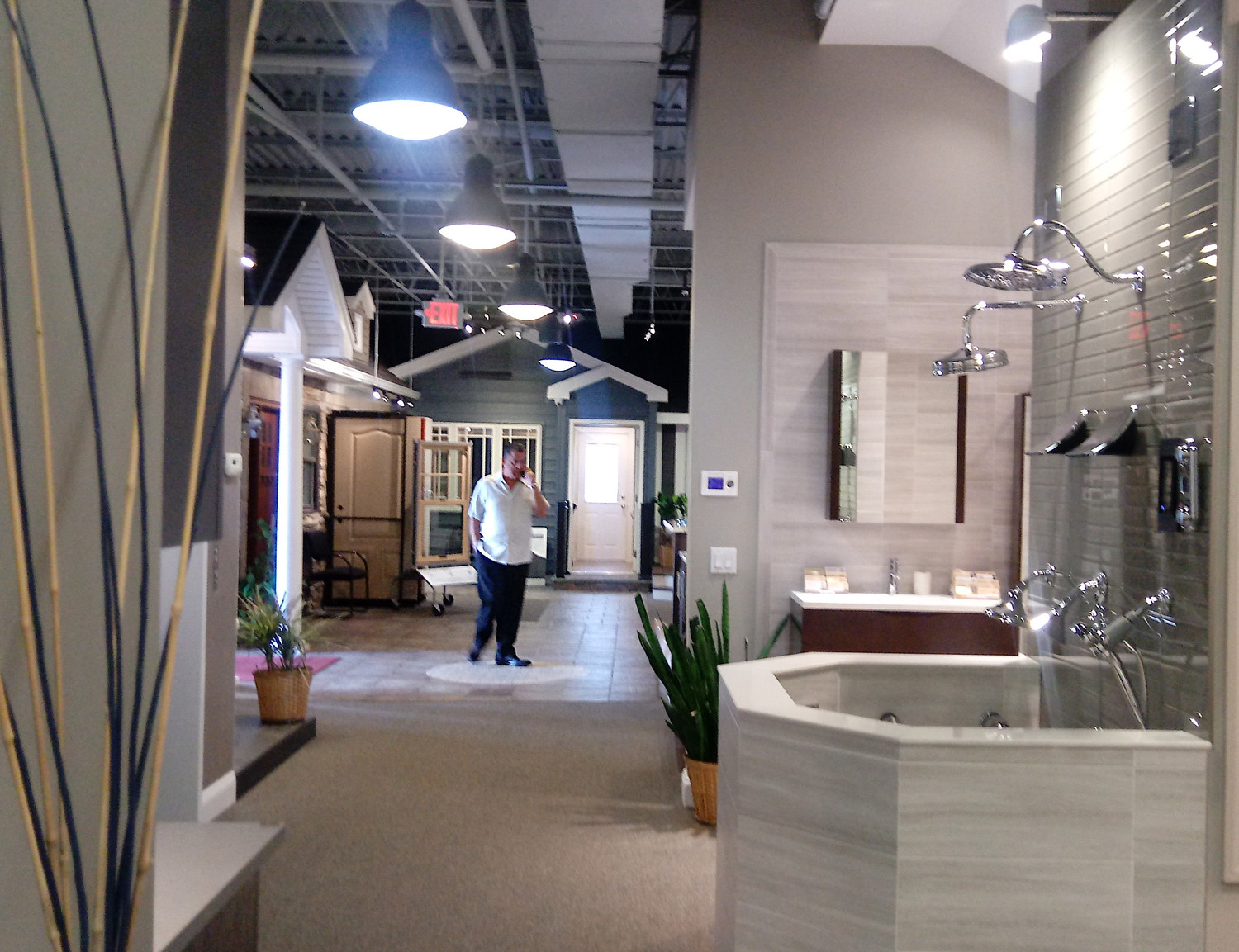 Ferro took over the now 72-year-old company — whose founder, Sol Hyman, moved to East Meadow after serving in the Navy in World War II — in 2002.
JENNIFER CORR/HERALD

YOLANDA IROS/HERALD
Previous Next
By Brian Stieglitz and Jennifer Corr

This is the second of two stories on East Meadow’s oldest businesses.

As soldiers and their families populated Long Island after World War II, some planted the roots of new businesses. Two that were founded in East Meadow built local customer bases and reputations that launched them beyond their communities.

“East Meadow really welcomed us and embraced us,” said Sal Ferro, the president and chief executive officer of Alure Home Improvements.
Sol Hyman, Alure’s original owner, served in the Navy before settling in East Meadow, and Henry Klar, founder of the real estate company the Klar Organization, grew up in Queens before moving to what he called the “true center” of Long Island. Both grew along with the budding consumer interest in what they had to offer.

“[Real estate] was probably the most important industry necessary for the growth of suburbia,” said Steven Klar, Henry’s son, who has managed the company since 1975. When he took over, however, Long Island was still feeling the effects of the 1970s recession, caused in part by the 1973 oil embargo. He and Ferro recalled how their businesses braved such economic fluctuations, and reflected on their time in East Meadow and what led them to succeed outside as well as inside the community.

Alure Home Improvements was originally a small paint company in 1946, at a time when thousands of people were escaping urban life for the quaint suburban landscape that was growing on Long Island.

Hyman founded the business after learning the craft of paper hanging from his brother-in-law. “After the war, he moved out here like so many people did, and obviously took advantage of all the growing that was going on in Long Island,” said Hyman’s son Carl, who operated Alure before Ferro took the reins in 2002.
Carl and his younger brother Bob joined the business in the 1970s, expanding it after working in the homes of clients and noticing the need for additional services, such as window treatments, carpeting and draperies.

Over the years, the home-improvement business changed, as large regional and national chains overshadowed smaller business. The late 1980s and the early ’90s were a tough time for Alure, because the recession had all but eliminated its profit margin. “We worked our tails off for several years,” Hyman recalled, “and made no money.”

Not long after Alure’s East Meadow showroom opened in 1991, Long Island’s first Home Depot moved across from its location on Hempstead Turnpike, and Hyman said he sensed that it would pose a threat to a small business like Alure. “I had the feeling that retail — meaning things like the carpet, the wallpaper, the window treatments, the paint — was going to be an awful lot more difficult,” he recalled, “so that’s when we really started to do a lot more things like the siding, the windows. We downplayed the products and up-played the labor.”

That decision led to success for Alure, Hyman said, as the business survived the recession and the growth of the large retail chains. After years of reinvention for Alure, however, businesses saw more change after the terrorist attacks of Sept. 11, 2001.

Ferro was the company’s vice president at the time, and was tasked with keeping up the morale of his staff and clients. He recalled telling them to “stay positive, and don’t let the goal of terrorists take hold of our country and economy.”

“For us to have grown from a painting company into this home-improvement regional company is something that we’re really proud of,” Ferro said. “And East Meadow is where it started.”

With the growth of Long Island suburbia came the increase in its population and property taxes and, by the 1970s, “People couldn’t hold on to their homes,” Steven Klar said. The recession made it clear that the heyday of the realty business Klar watched his father, Henry, build had passed.

Nevertheless, Steven took over the business in 1975, while studying financial and real estate law at Brooklyn Law School. He ran unsuccessfully for Congress in 1978, with the goal of helping to create more affordable housing, and then returned to the company with a new goal in mind: to build.

“I designed the projects and the homes, and I went wherever I wanted to build,” Klar said, adding that the business began building in area beyond Long Island, including upstate New York and Florida.

He began taking out bank loans to keep the business growing, and “I was lucky that they seemed to have liked me,” Klar said, adding that some bankers even turned to him for advice when they had problems with other developers.

Now, he said, the price of living on Long Island has soared, and there is an increase in the number of young adults looking to buy homes elsewhere. One way in which he hopes to buck this trend is by increasing the number of homes for rent, and consolidating space by creating affordable housing communities like the 140-unit development the Klar Organization is building in Coram, called Willowwood at Overton Preserve.

“I’m encouraged,” Klar said, “that there will be a long life for Long Island after I’m finished building.”