Big, bright, and neon yellow: a piece of history in East Meadow 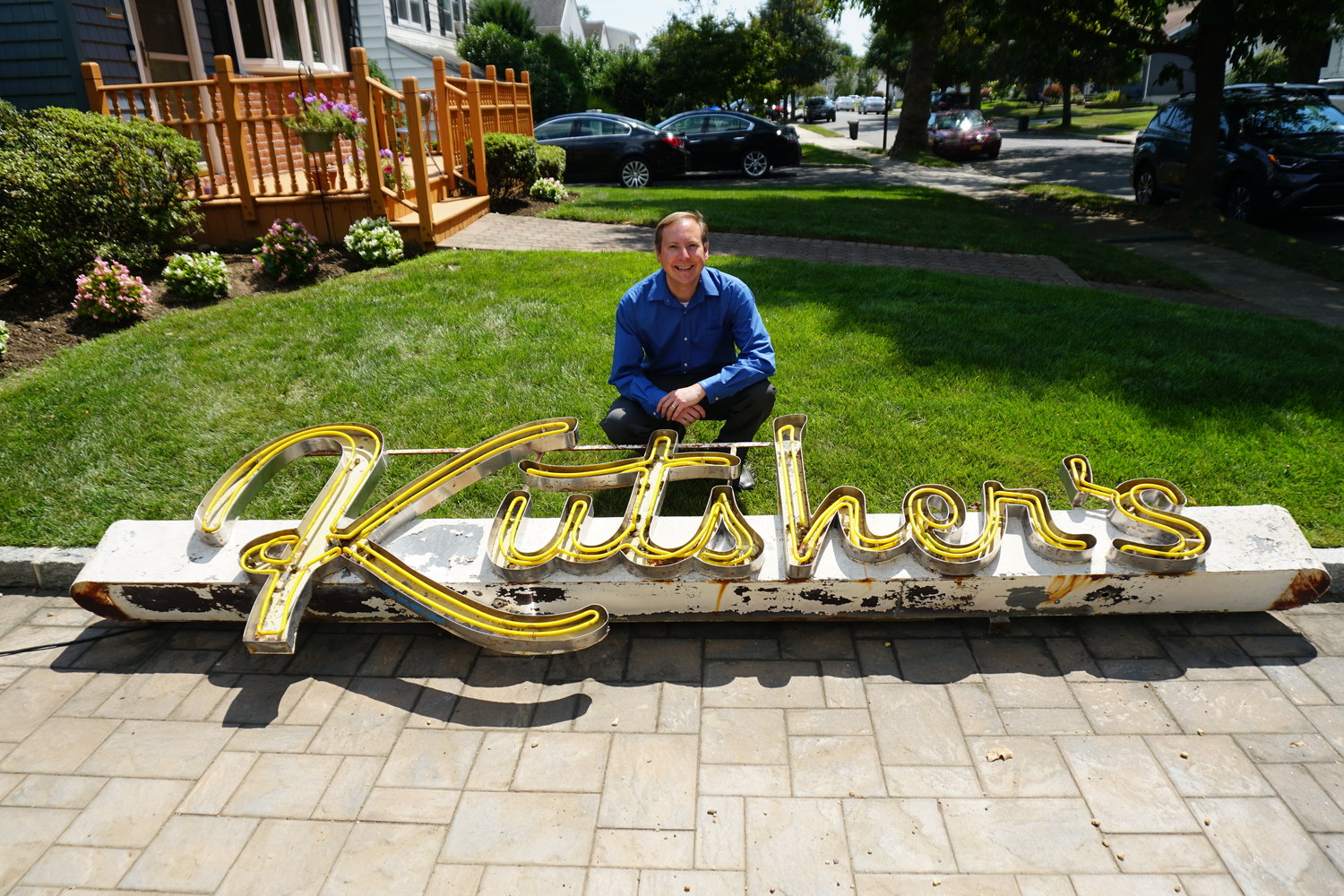 East Meadow resident Scott Eckers has been holding on to a big piece of Catskills history in his garage for the past eight years. Now the large neon sign is heading to a museum.
Courtesy Scott Eckers 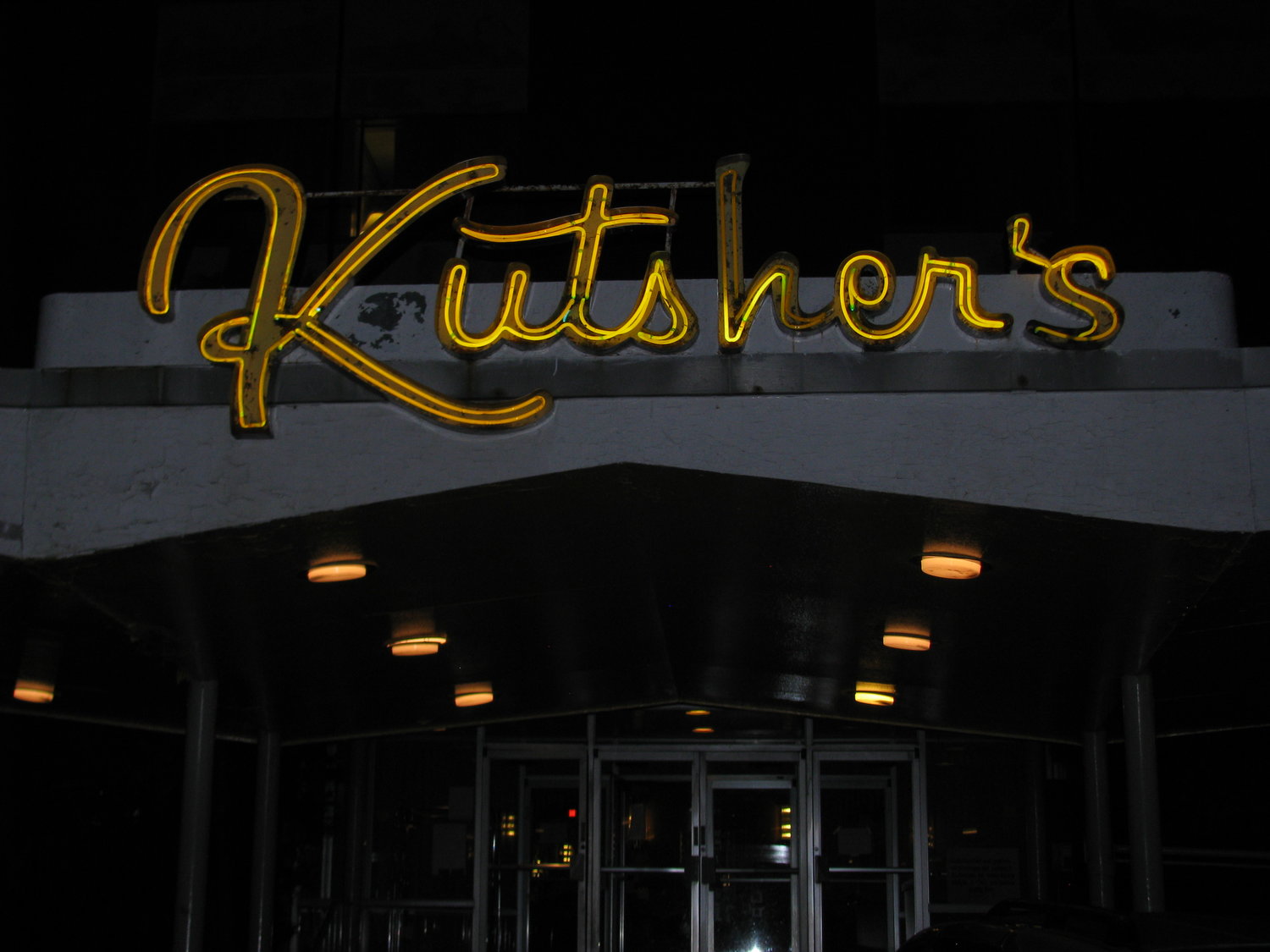 Kutsher’s Hotel and Country Club was the longest-operating family-owned Catskills resort. The sign that Eckers owned welcomed guests as they entered.
Courtesy Scott Eckers
Previous Next
By Mallory Wilson

Not many people can say they have a museum-worthy piece of history in their garage. East Meadow resident Scott Eckers can.

His garage was home to a giant neon “Kutsher’s” sign, from one of the most well-known resorts in the so-called Borscht Belt,” an area in the Catskill Mountains that had over 500 hotels.

Kutsher’s Hotel and Country Club closed in 2013. Eckers, along with his friend Michelle Conrad, bought the sign at auction a year later for $1,000, and spent another $1,400 to have it removed and brought to East Meadow.

“I didn’t know what I was going to do with it,” Eckers, 42, admitted. “But I had to have it, because it was a great piece of my Catskills collection, but now it’ll be part of the museum collection.”

The sign was picked up on Aug. 19 so that it can be part of a planned Catskills resort museum designed to educate the public about the Borscht Belt-era hotels and the experience of a family vacation during that time. The sign was extra important to Eckers —who wears many hats, including East Meadow Board of Education trustee, social studies teacher at Great Neck High School, and vocalist. He was the last singer to perform at the iconic hotel resort.

Eckers, who has been singing in places like hotels for fun since he was 19, said that when he heard Kutsher’s was closing, he told the manager that he needed to be the last act there.

“I spent a long time singing in these hotels, and they closed one by one and I had fewer and fewer places to sing,” he said. “I did my act the last day of September of 2013, and it closed the next day.”

He finished his set at the Kutsher’s Deep End Lounge with Billy Joel’s “This Is The Time” and Lee Greenwood’s “God Bless the USA.”

Kutsher’s was the longest-operating family-owned Catskills resort. Resorts in the Borscht Belt, which was named after the beet soup that was common in Jewish cuisine, were popular vacation spots for Jewish Americans starting around 1920, with its heyday from the 1950s to the 1970s. Jews headed to these resorts in the Catskills to escape the heat before air conditioning and because they weren’t allowed in a lot of New York City hotels.

The hotels served unlimited Kosher dishes and had a plethora of activities and services. Including, Eckers said, a babysitting service that would go room to room at night checking on children while their parents were out having a good time.

Eckers’ coveted sign was the beacon people saw when they pulled up to the hotel. “This sign is an iconic piece of Catskills history for anybody who went to the hotels,” he said. “Generations of people passed under the sign when they went into the hotel.

“So I said this belongs in a museum. It’s not doing the world any good sitting in my garage here in East Meadow.”

Isaac Jeffreys, the planned museum’s scholar in residence, said the Kutsher’s sign is an amazing artifact. “A lot of these properties haven’t been maintained or cared about even by their owners nowadays,” he said. “It’s amazing that this one still works and is in good condition.”

“It’s incredibly rare, it works, it’s in great condition, and overall it was urgent that we got it,” Marisa Scheinfeld, a board member of the museum said. “Due to the nature of how a lot of these hotels closed, some of them like literally just closed their doors, and they went out of business, and a lot of them auctioned off their items like Kutsher’s.

“So we know there’s stuff out there. It’s just a matter of finding the items and the people that have them.”

When thinking of places like Kutsher’s, people think of the 1987 film “Dirty Dancing,” and they’re not too far off. Grossinger’s Resort, which closed in 1986, was the resort the movie was based on, Eckers said.

The idea of the Borscht Belt resorts died because of the three A’s according to Eckers -— air conditioning, assimilation and airplanes. But that didn’t stop him from maintaining his relationship with it. His family purchased property there when he was a child, and he went to summer camp there which sparked his love of performing. Now his parents live there full-time, and he has a house in Swan Lake.

“Because of my family’s history, with the Catskills growing up there every summer and vacations and holidays, I just became attached to these hotels and to the whole Borscht Belt experience,” he said. “That is why I thought it was so important to maintain the history and the culture behind the Catskills, the Borscht Belt hotels and bungalow colonies.

“I thought that by saving this sign, this really iconic piece of history, I can help keep it for posterity.”

Marissa Scheinfeld is no longer in the above listed position.