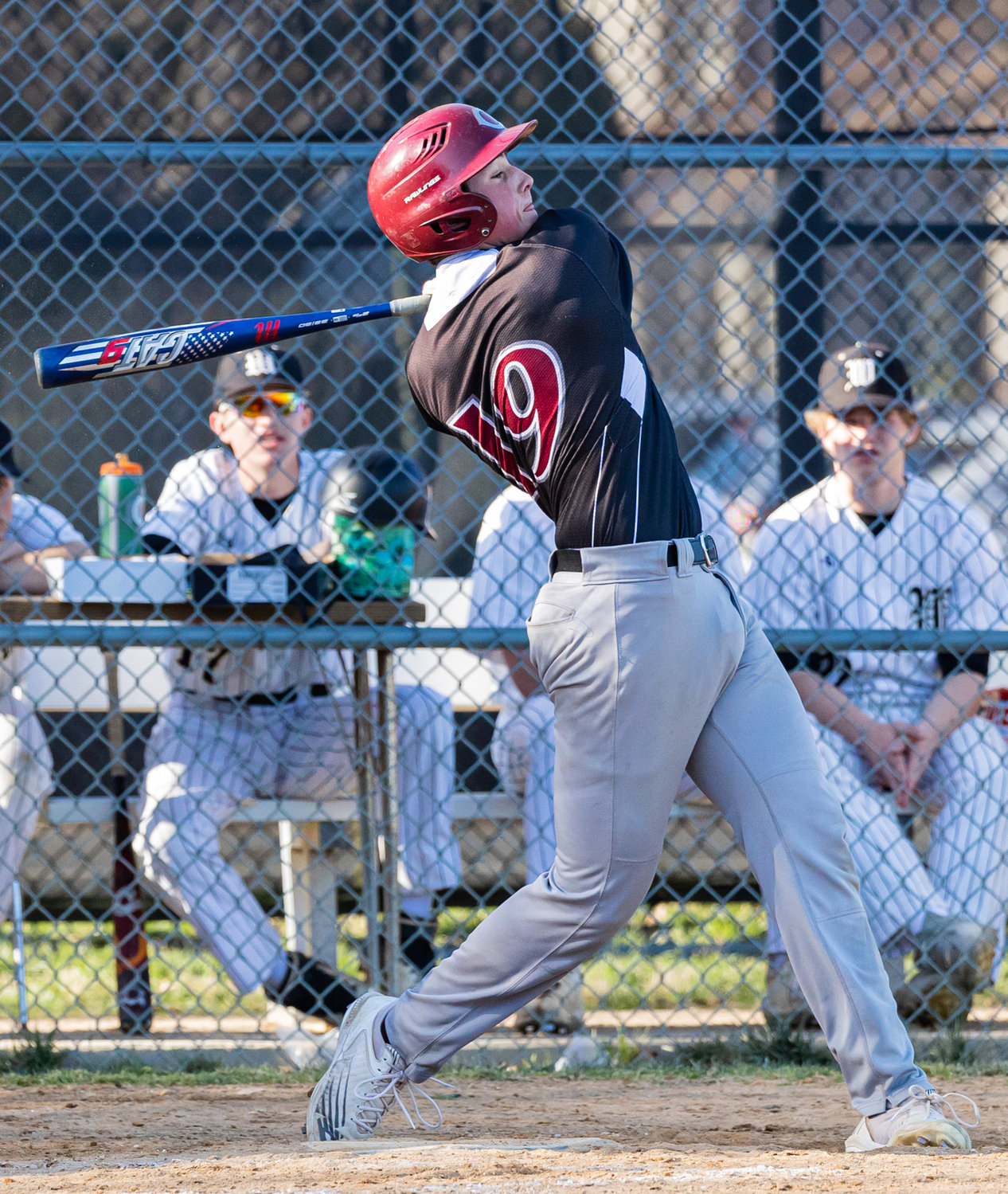 Senior Jacob Dandic cracked a three-run bomb in the seventh inning to lift the Rams to a win over Plainedge on April 21.
Karen Millindorf/Herald
By Brian Kacharaba

Jacob Dandic and Sean Welsh helped the Clarke baseball team win a big series against a rival foe and secure first place in an uber-competitive conference.

After losing the series opener, Dandic hit the go-ahead three-run home run with two outs in the top of the seventh inning of the middle game and Welsh added a save followed by a key hit in the rubber match to help the Rams defeat Plainedge to regain first place in Conference 4A.

Clarke mustered just five hits and had two baserunners picked off in a 2-0 loss in the first game April 18 and was a strike away from defeat again three days later when Dandic blasted a full-count pitch over the wall to give Clarke a 4-2 lead.

Plainedge drew a walk to open the bottom of the seventh and Welsh came in and immediately surrendered a double, putting runners on second and third. But he rebounded to strike out the next batter and, after yielding a run-scoring ground out, induced a game-ending pop up.

“We had some poor baserunning mistakes that really took the game away from us. That was a tough loss,” Rams coach Tom Abruscato. “We finally had some decent at-bats in the middle game and then Dandic squared one up. So that was nice, and Welsh came in and was able to close the game out.”

Clarke (9-2), which is seeking an unprecedented 22nd division title in 24 years under Abruscato, is now atop the standings at press time and knocked Plainedge (7-3, 6-3 conference) into third.

Opposing offenses rarely get a breather when Welsh (3 wins), Nick Giardino (4) and Nick Berasti (2) take the mound. Welsh, a five-game winner last year, has not allowed more than two runs in any of his starts, including a complete-game two-hitter with eight strikeouts in a 4-1 victory at Seaford on April 4.

The next day, Giardino tossed his complete-game gem with 10 strikeouts in a 5-3 triumph over the Vikings. Berasti yielded just three hits in five innings and had three hits and three RBI in an 8-2 win over Island Trees on April 1 and earned the victory in the finale against Plainedge.

“Nick came in the other day with 24 innings pitched, one walk [and] 36 strikeouts,” Abruscato said. “It was the same thing that Welsh has done.”

Junior lefty Matt Cardozo has also been a stalwart out of the pen with two saves, including the Plainedge finale.

The offense has done its part by averaging five runs a game this spring, but Abruscato said the baserunning still needs some fine-tuning if the Rams want to go deep into the playoffs.

“We need to tie up this baserunning stuff,” he lamented. “Sometimes, it’s like we’ve never even discussed it or practiced it. We’re in good shape record-wise, but as far was where we’re used to going and how we’re supposed to execute, we all know we have work to do.”