Dancing his way to Broadway

Devin Lugo makes his debut in ‘The Music Man’ 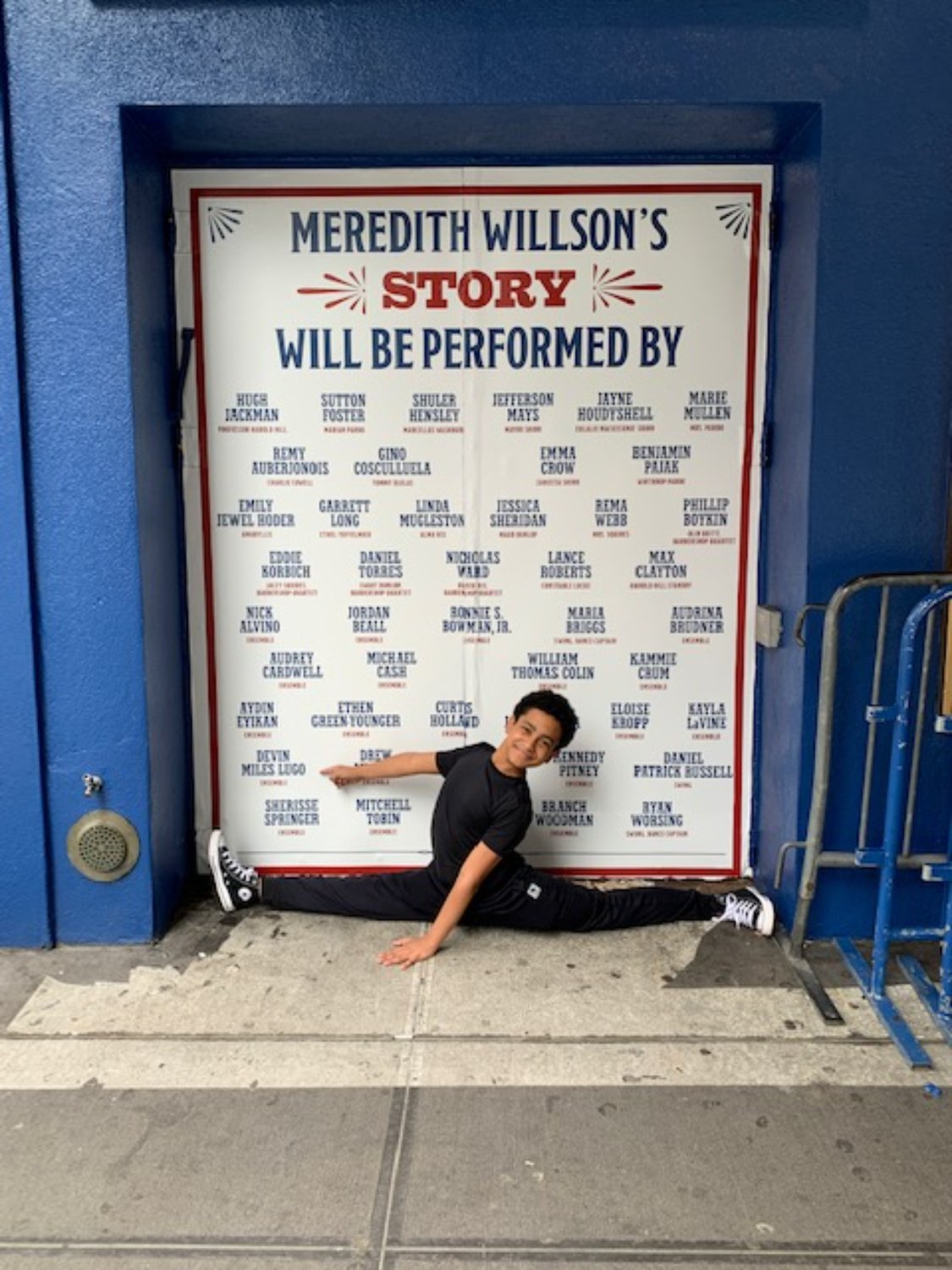 Devin Lugo, 11, made his Broadway debut this month as a member of the dance ensemble for ‘The Music Man.’
Courtesy Jennifer Lugo
Previous Next
By Mallory Wilson

The curtain went up on Devin Lugo as the 11-year-old dancer from Woodland Middle School made his Broadway debut in “The Music Man.” Lugo is a member of the dance ensemble for the show that plays in the Winter Garden Theatre.

The rising star seventh-grader said that as he started to get better at dancing, he knew that Broadway would be a dream of his. For his fifth-grade yearbook quote, he wrote that his life aspiration was to be a dancer on Broadway. That dream came true June 21. He’ll be in the show through December.

Dancing since he was 4 at Alexa’s Dance Academy in East Meadow, this is Devin’s first big role aside from his years of dance competitions. He takes classes in tap, jazz, hip-hop, ballet and contemporary dance, and said he doesn’t really have a favorite.

“I was inspired by my cousin because my cousin was always dancing,” Devin said of his 17-year-old cousin Jada Zurita. “When I was little, I looked up to her, so then I wanted to dance.” He danced six days a week before landing this role.

Devin said that he didn’t even know what the audition video that he recorded was for. “My mom didn’t tell me what I was signing up for,” he said. “She just asked if I approved of the video she was going to send in.” A video entry was needed before Devin could be considered for an audition.

“Devin can get a little nervous so I told him there was nothing to be nervous about and I just kind of did it,” said his mother Jennifer Lugo.

“I wasn’t sure what was going to come of it if anything, so I told him he had nothing to really worry about until there was something to say.”

His first in-person audition was April 19, and then Devin got two callbacks, one on April 21 and the other on May 2.

He was feeling excited and nervous about the audition, he said. “I just treated it like it was a normal dance rehearsal because I didn’t want to freak myself out over it,” Devin said. “I remembered that it was a big audition and I had to do my personal best, but I wouldn’t overthink it too much.”

He found out that he got the part May 3 and he said that he immediately knew he got it when his mom started recording him with a camera.

His Woodland classmates were excited for him, he said, after his teacher overheard him telling one of his friends about the role and made him tell the class, but he doesn’t like talking too much about his accomplishments because “I feel like I’m bragging,” he said.

There are 21 kids in the ensemble but less than 10 around his age. He has three costumes and dances in roughly nine numbers out of around 20 scenes, he said. He dances in eight shows a week.

Practicing for the show began May 24, which was when he left Woodland and continued with his education with tutoring. The rehearsals were daily except for Sunday and Monday, Jennifer said. “It was kind of nerve-racking, but I did it,” Devin said.

Jennifer said that for right now they stay in hotels the night before his matinee shows and whenever he has two-show days, but they’re looking for housing in Manhattan. “It’s a lot and I still work,” said Jennifer, who’s a claims manager for a Manhattan collection company.

“I have an amazing boss and an amazing office and an amazing team around me, and I physically am in the office maybe three days, if that,” she said. “I can work from wherever I am, but I tried to balance it all.”

Jennifer said Devin’s brother Darius, 18, was a huge help in bringing Devin to and from the city for rehearsals.
Devin’s favorite part of being in the show, he said, is coming up with handshakes for everyone. Out of 50 people, he’s gotten to about seven handshakes. “I’ll remember all 50 handshakes because I can remember all of my dance numbers,” he said.

Jennifer said that she and her husband, Juan, are proud of where Devin is at his age. “I always knew we would get here. I just didn’t think we’d get here at 11,” she said. “Once he had debuted, you could see the joy in his face doing what he loves and that was enough. That’s why we do what we do.”