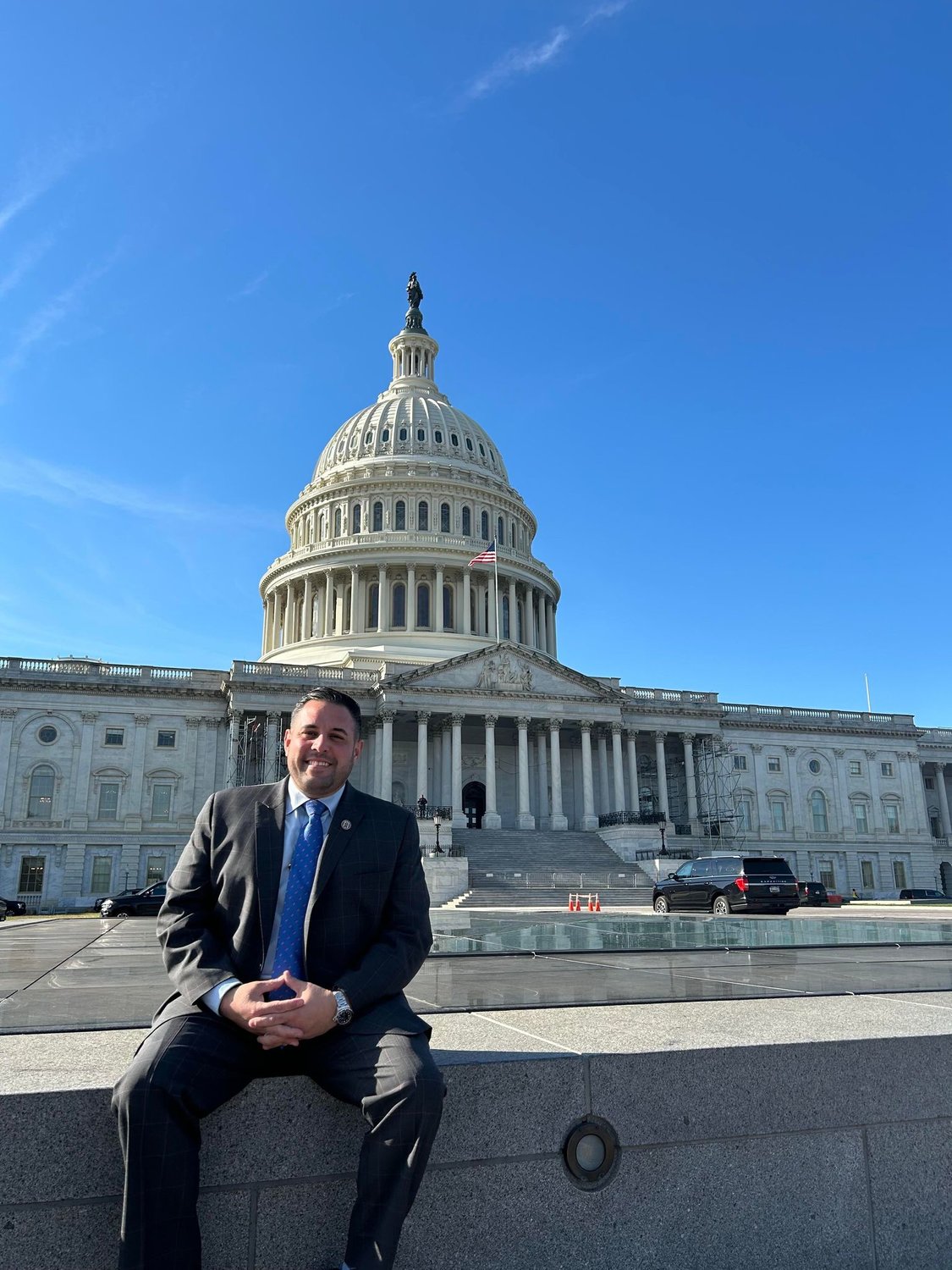 By the steps of the U.S. Capitol Building sits freshly elected Anthony D’Esposito, a Republican from Island Park, getting ready for his first day in Congress.
Courtesy Anthony D'Esposito
By Karina Kovac

He was an obscure candidate from Island Park who went up against a Republican powerhouse — and won.

His name was Al D’Amato, who would go on to serve 18 years in the U.S. Senate before being upended himself by Chuck Schumer in 1998. D’Amato’s early political career in Island Park involved him running village elections, which helped him get his feet wet before heading to Congress.

Now, four decades later, voters have sent another Island Park resident to Washington as Anthony D’Esposito makes his way to the floor of the House of Representatives, in congressional seat he flipped from Democrat to Republican.

“I don’t think that coming from a small community prepares you to be in politics,” D’Esposito said, after defeating Laura Gillen in the November election. “I think it opens your eyes to what community is all about.”

But getting involved on a local level in the fire department, Kiwanis, chamber of commerce or a civic group is “really what opens people’s eyes to further public service” — paralleling how the Hempstead town councilman got his start.

Mentioning D’Amato’s influence during his victory speech election night, D’Esposito says he’s pleased to be adding to the village’s story.

“That’s a piece of history, especially coming from a small tight-knit community,” he said. “It’s a place where I was born, raised, called home. The fact that we’ve sent two members of our little village to represent us in Washington, D.C. I think is pretty cool.”

On Long Island, those within the Town of Hempstead have wondered who will fill his empty seat on the town board. D’Esposito still has a month or so left before he has to pack up and head to Capitol Hill, but says he’ll “figure that out when the time comes.”

He spent his first week in Washington undergoing orientation, and hopes when it comes time to join committees, he’ll find himself on homeland security, and transportation and infrastructure.

Worried about the state of people’s pocketbooks as well as their quality of life, D’Esposito says nothing has changed his campaign promises since winning.

“The duration of this campaign, the message has been the same,” D’Esposito said. “And people are concerned about things that affect their pockets. They’re concerned about crime, and they want someone to represent them that’s willing to cross party lines and work with others in order to deliver for our communities.”

“When it comes to Nancy Pelosi, the fact that we can all ask ourselves, ‘Are we better off today than we were two years ago when Joe Biden took office?’ And she’s been nothing but a rubber stamp for the Biden administration,” he said. “And I think a lot of the issues that we’re dealing with on Long Island are issues that are reflective of the administration.”

So, which Democrats will D’Esposito work with?

“People that are there to deliver for the communities that they represent,” he said. “Not just be a loud mouthpiece and looking for headlines on Twitter and CNN.”

Sitting down as a delegation after Thanksgiving, D’Esposito says he’s looking forward to making America safer, the economy stronger, and energy greener. But his first focus will be eliminating the state and local taxes cap, known as SALT.

“For me, what’s most important is delivering change to Long Island,” D’Esposito said. “Working hard to repeal the SALT cap, so that we can bring tax relief to communities here in New York — some of the individuals who pay the highest taxes in the nation. So, there’s a lot of work to do.

“But I look forward to getting to D.C. again, rolling up my sleeves, and getting to work.”