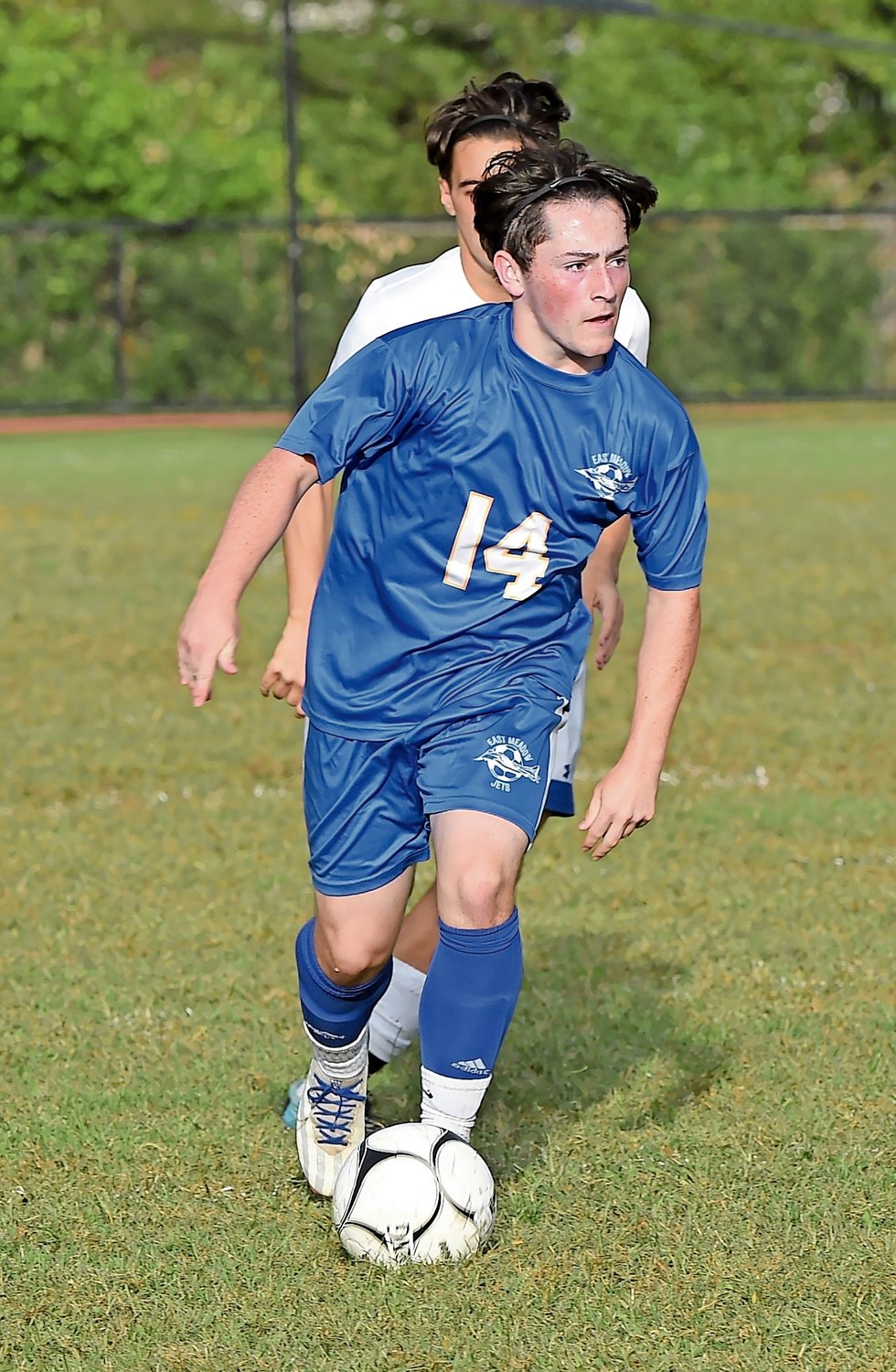 Senior Thomas Espinosa and the Jets are looking for a strong finish and some Ws after settling for four draws already.
Donovan Berthoud/Herald
By Garrett D. Uribe

As the boys’ soccer season zips by like a zephyr – 14 games crammed into five weeks – a team’s slow start can quickly translate to hopes that are gone with the wind, especially in a 15-school mega-conference stacked with competitive squads.
East Meadow ended a 12-year drought when it reached a postseason play-in game in April, falling 1-0 to Freeport to finish .500 overall. Fifth-year Jets coach Bryan Horrmann – whose club is 1-4-4 in the new expanded Nassau AA – said his club knows the clock is ticking on its aim to take the next step this season, as East Meadow likely will need to win out to secure another play-in in mid-October.
“We’re not out of striking distance,” said Horrmann, who saw his team strike in the second half to tie the score against first-place Baldwin Sept. 30 – only to be edged 2-1 on host Baldwin’s penalty kick in the 75th minute. “I know we can get far if we put all the pieces together. In this conference, just a few wins can leap-frog you past teams. We just need to play consistent ball.”
Added Horrmann: “And start putting balls in the back of the net.”
Senior forwards Jared Schary and Thomas Espinosa lead East Meadow with two goals apiece, while senior midfielder James Cartier is the Jets’ points leader with a goal and three assists. “We’re lucky to have Jared up top,” Horrmann said. “He has that extra gear and creates chances for us. Thomas is a hard-worker who gets his opportunities. We hope he gets more in these remaining games. James Cartier can do a lot with his feet, but also brings a level steadiness that’s appreciated on the field.”


Sharing co-captain honors with Cartier, junior Lucas Tobar has been a rudder for a young Jets defense built around center backs Evan Weinstein and Robert Derwin, with fellow rising sophomore Raymond McLeod (one goal, one assist) at outside back. “Lucas is very good on the defensive side, but we can put him anywhere,” Horrmann said. “Very glad we get to see him back next year. Robert and Evan work well in tandem; both have good feet, are vocal and play hard. Raymond’s a player to watch. He’s becoming quite a shutdown player, but he’s also not afraid to come up and score.”
Senior goalkeeper Jonathan Petrie, who helped preside over East Meadow’s second-ranked defense last season in Conference AA3, has taken on the mentorship of freshman Jace D’Jon. Pressed to start in Petrie’s absence on Sept. 11, D’Jon answered the bell, authoring a five-save 2-1 victory at Herricks.
“Jace did well,” Horrmann said. “He’s come in and shut the door on teams. Jonathan earned his stripes and won the starting job by working hard in the summer. He’s providing good knowledge to Jace.”
Horrmann summarized: “We’re a senior-heavy team that is passing the torch. It’s about building consistency and becoming a competitive program. Whatever happens, we’re not a team that rolls over. We’ll play our hearts out every game.”