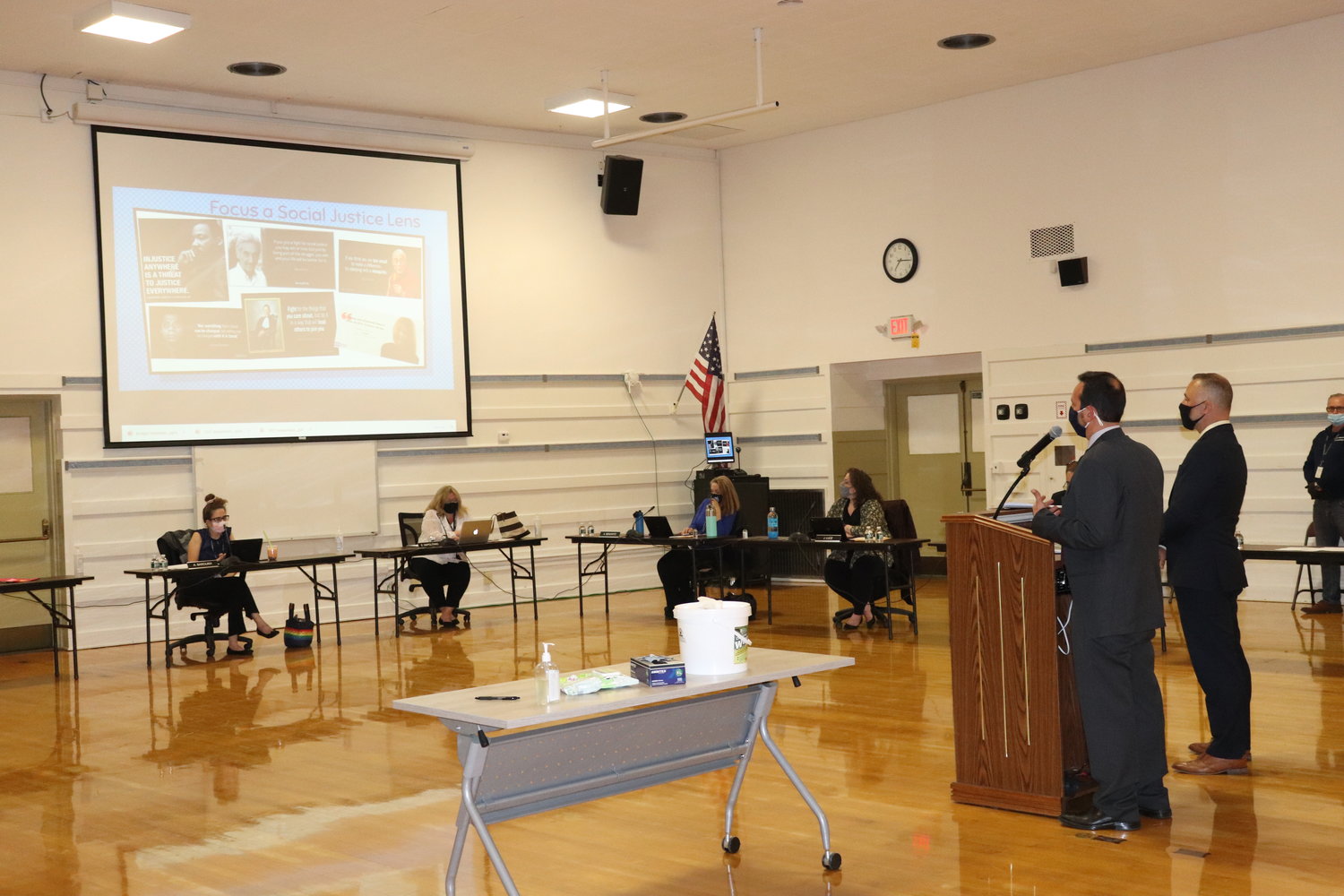 Jim Mendonis, director of social studies and 21st century learning, left, and Frank Lukasik, director of literacy and funded programs, discussed the importance of time, access and choice of books with diverse characters and storylines with the East Meadow Board of Education.
Jennifer Corr/Herald
What social justice is, and is not

What social justice is:

-Teaching that is relevant to the real word and that considers multiple perspectives.

-A classroom that teaches students about the world they live in and how to effect change.

-Curricular decisions that consider, value and build on students’ diverse prior learning experiences.

-A classroom that interrupts cycles of oppression.

-An “add on” for classrooms.

-Something that gets done only in diverse classrooms, classrooms that lack diversity or any other special category of school.

-A “black and white” issue.

-For older students only.

-A monthly event or celebration.

-A progressive or liberal movement.

The percentage of books depicting characters from diverse backgrounds, based on the 2018 publishing statistics of 3,134 books compiled by the Cooperative Children’s Book Center, School of Education at the University of Wisconsin-Madison:

Twenty-seven percent had characters that were animals.

Ten percent had characters that were African or African-American.

Five percent had characters that were Latinx.

One percent had characters that were American Indian or First Nation.

Jim Mendonis, the East Meadow School District’s director of social studies and 21st century learning, and Frank Lukasik, the director of literacy and funded programs, stood before the Board of Education on April 7 to stress the importance of having more books with diverse characters and storylines available in classrooms and school libraries.

“I thought that their presentation was important and timely in terms of looking at advancing social justice with access to diverse texts,” Superintendent Dr. Kenneth A. Card Jr. said, “given some of the issues that have transpired here in the United States in the past year.”

Lukasik said that his goal, and Mendonis’s, was to illustrate a classroom where readers thrive — one that offers students access, time and choice to engage with various texts, like picture books, novels and graphic novels.

Having more time to read, more flexibility to choose books they want to read and access to books with diverse characters and storylines will create more enthusiastic readers in the East Meadow School District, the educators summed up.

Despite the fact that children have access to the world around them at their fingertips through their devices, Mendonis said, it is their educators’ job to make them think when they are in school or at home. “We want them to be agents of change, we want them to take a stand, we want them to stand up for themselves and for those who are being mistreated,” he said. “We really want to start by modeling that for our kids.”

For example, Mendonis explained, every year the district celebrates Black History Month in February. But it shouldn’t be an isolated event, because Black history is American history, and should be discussed all year long.

“Throughout the course of the year, we want to introduce content and sources and viewpoints that are diverse and that take into account every part of history,” Mendonis said.

To increase access to characters who look like and have lives similar to those of East Meadow students, Mendonis and Lukasik have been taking inventory of building and classroom libraries to see what is available and what is needed. This is especially important considering that 50 percent of children’s books published in 2018 focus on white characters, according to a study by the Cooperative Children’s Book Center at the University of Wisconsin-Madison (see box).

“I work in a very diverse area, with many cultures, religions, backgrounds, countries and languages,” said Dr. Jodi Luce, a Board of Education trustee, “and I can tell you when children who are reading see characters that look like them, that live like them, that speak like them, their eyes light up and their interest level is so much more piqued and their motivation to read and engage with that text is so much higher.”

“‘The Day You Begin’ discusses diversity, imagery and self-esteem,” he said. “This is completely appropriate for an elementary classroom.” And “The Day War Came” is about a refugee who moves to a town where there is no room for her and fellow refugee children in the school until the townspeople bring out chairs for them.

“It gives the voice to the author and the pictures, and not so much the teacher,” said Mendonis. “Sometimes teachers feel a bit awkward bringing up controversial topics, and we can use texts like this to bring up a variety of themes.”

Dr. Scott Eckers, a school board trustee, said that another school district, where he works, isn’t particularly diverse, so having access to books with diverse characters and storylines is key to broadening students’ perspectives.

The district plans to invite the community to get involved in this literary effort later this month. On April 21 at the Leon J. Campo Salisbury Center, Nancy Churnin, the author of “Martin & Anne,” a story about the kindred spirits of Anne Frank and Dr. Martin Luther King Jr. — who were born the same year, 1929 — will visit for a book talk.

Card thanked Lukasik and Mendonis for inspiring the Board of Education, parents, faculty and the community to continue the district’s trajectory toward inclusivity, diversity and equity.