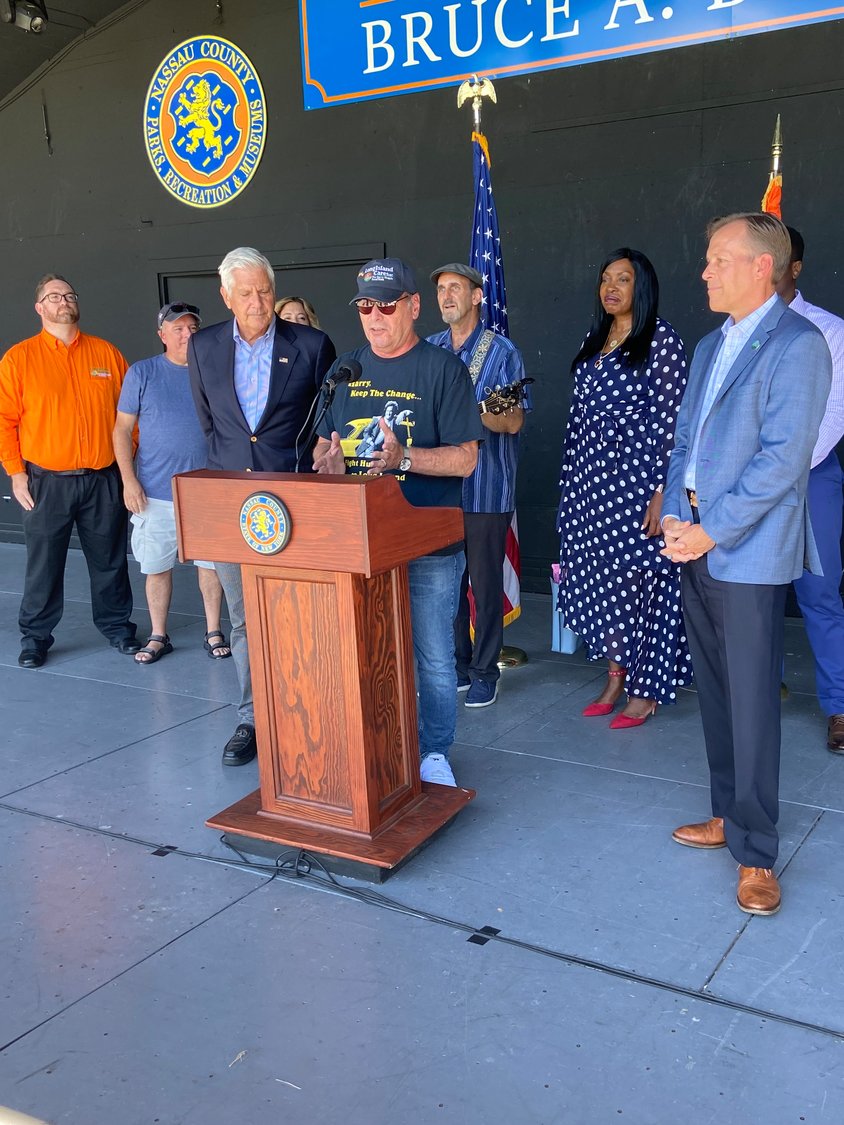 As always is the case with Long Island, the community rallies around this issue.”
Paule Pachter, CEO, Long Island Cares
Want to help?

To learn about how to donate to Long Island Cares visit: TinyUrl.com/FEEDNASSAU

Chapin, a Grammy Hall of Famer, is known for his classic songs like “Cat’s in the Cradle” and “Taxi.” He also founded Long Island Cares, Long Island’s first food bank, in 1980. Chapin died in 1981 at the age of 38 in a car crash on the Long Island Expressway. He was driving westbound on his way to perform at the theater in Eisenhower Park that now bears his name.

“Not only was he a great songwriter, and a great performer,” Blakeman said. “But he’s also a humanitarian.”

The main LIC location is in Hauppauge, but the food pantry has satellite locations in other areas of the island including Bethpage, Hampton Bays, Huntington Station, and Freeport. A location in Lindenhurst also has a pet food pantry. A third Nassau location, Valley Stream, will open in November. In 2021, the pantry fed almost 74,000 Long Islanders, with 11.4 million meals distributed, according to the pantry’s website.

CEO of LIC, Paule Pachter, said LIC opened 25 pop-up locations during the Covid-19 pandemic to aid those in need with additional support from the Town of Hempstead. The pop-ups helped the pantry feed an additional 223,000 people.

Once, the pandemic started to slow down, and the numbers started to decrease, Pachter said that they thought they were “out of the woods,” and that they would have enough food to feed those in need.

“Then, of course, inflation happened,” he said. “And that sent us into a whole new direction.”

Since July, there has been an estimated 67 percent increase in local residents coming to the food banks for emergency food assistance.

“The reason they’re coming is because of the increase in the cost of going to the supermarket to buy food, the cost of utilities, the cost of health insurance, of insurance for your vehicles,” Pachter said. “People are struggling.”

The Freeport satellite location is seeing about 4,000 people a month, and the Bethpage facility, opened last year, is seeing about 700 people, Pachter said, with most of the people being served being senior citizens.

The 19th annual “Just Wild About Harry” benefit concert, initially scheduled for July, was moved to Sept. 6. Produced by Stuart Markus, dozens of Long Island musicians were set to perform Chapin’s music at this 50th anniversary celebration for Chapin’s first two albums. In exchange for the free show, attendees were asked to bring donations and non-perishable food to support LIC.

“I can’t tell you how much that means to our family that this tradition continues on,” Jason Chapin, Harry’s son said. “It’s really a wonderful way to celebrate my father’s life and legacy.

Typically, during these concerts, more than 3,000 pounds of food can be collected. “It’s not just a musical event,” Pachter said. “It’s a call to action.”

Food has been coming in as normal to the pantries, Pachter said, except for the delays caused by supply chain issues.

LIC typically purchases about 75 percent of all the distributed food, the rest comes from donations. Pachter said that he’s confident that LIC has enough in its inventory.

“As always is the case with Long Island, the community rallies around this issue,” Pachter said. “So what we’ve seen in the past six months is actually a slight uptick in the amount of donated food that’s coming in from all angles.”