L.I. Pickers offers a snapshot of decades past 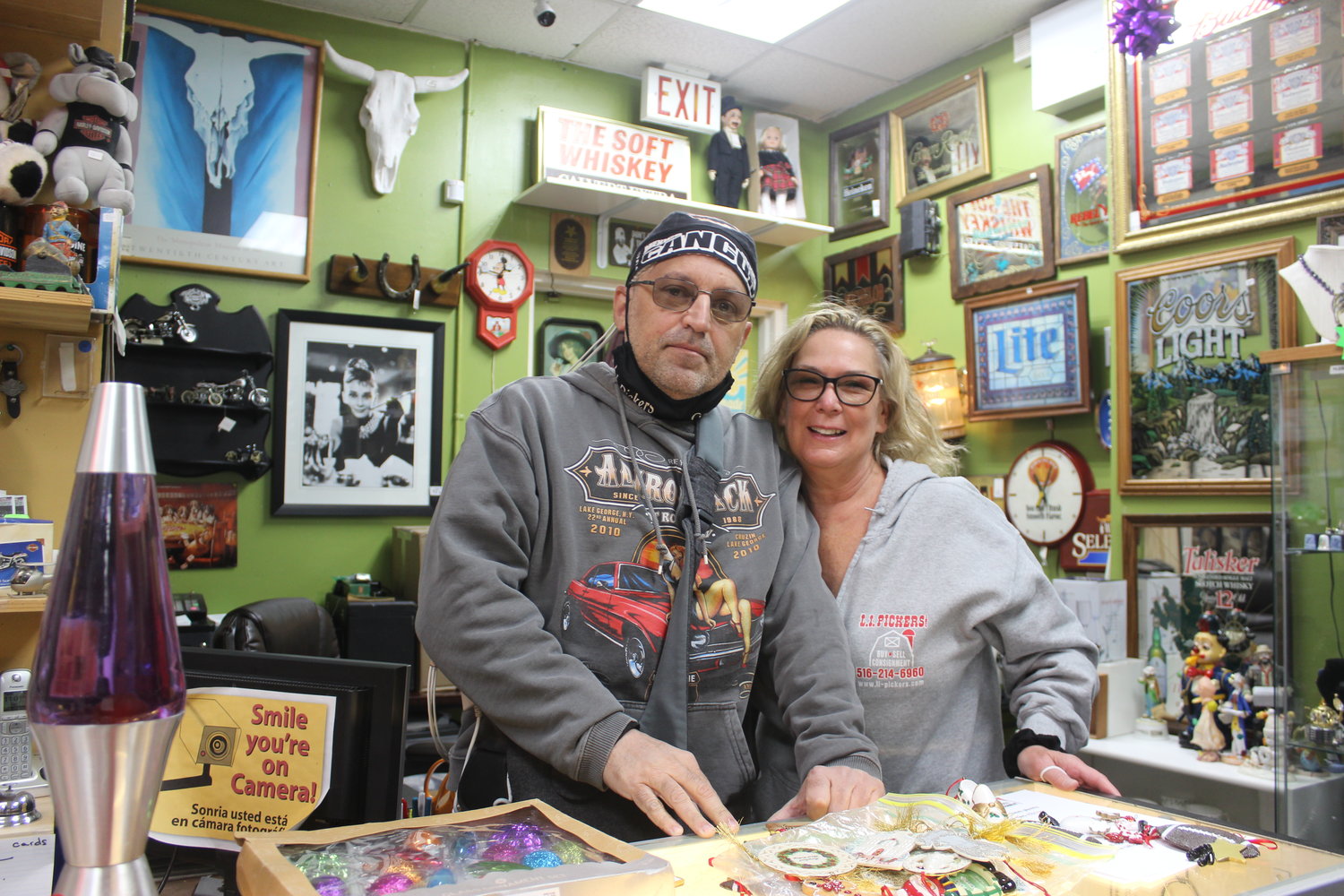 For Gary Guarnotta, left, and his wife, Maureen, of Levittown, business has been booming this year at their consignment shop, L.I. Pickers, on Carman Avenue in Salisbury.
BRIAN STIEGLITZ/HERALD 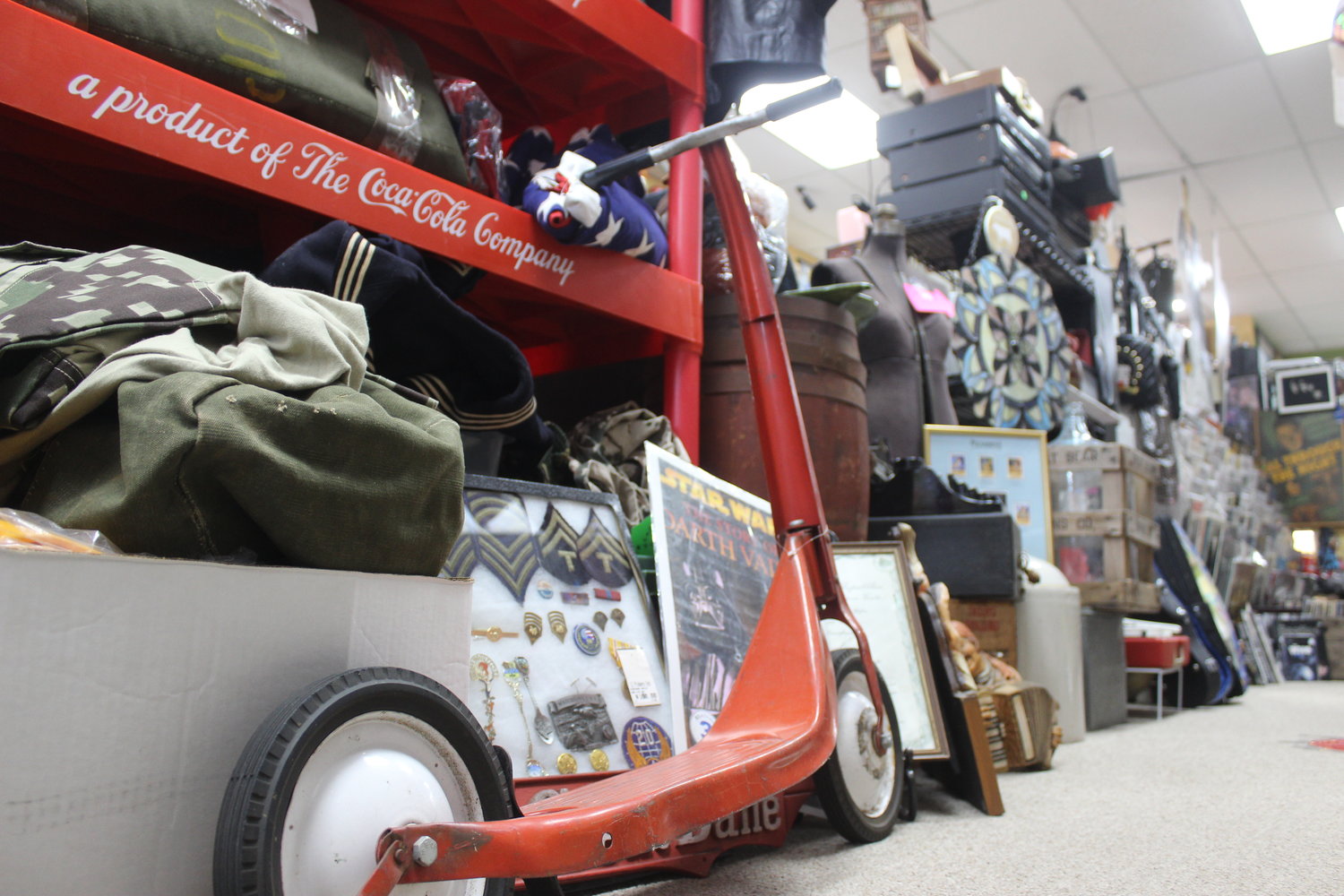 The shelves lining the aisles of the shop are filled with memorabilia from the past 70-plus years.
BRIAN STIEGLITZ/HERALD 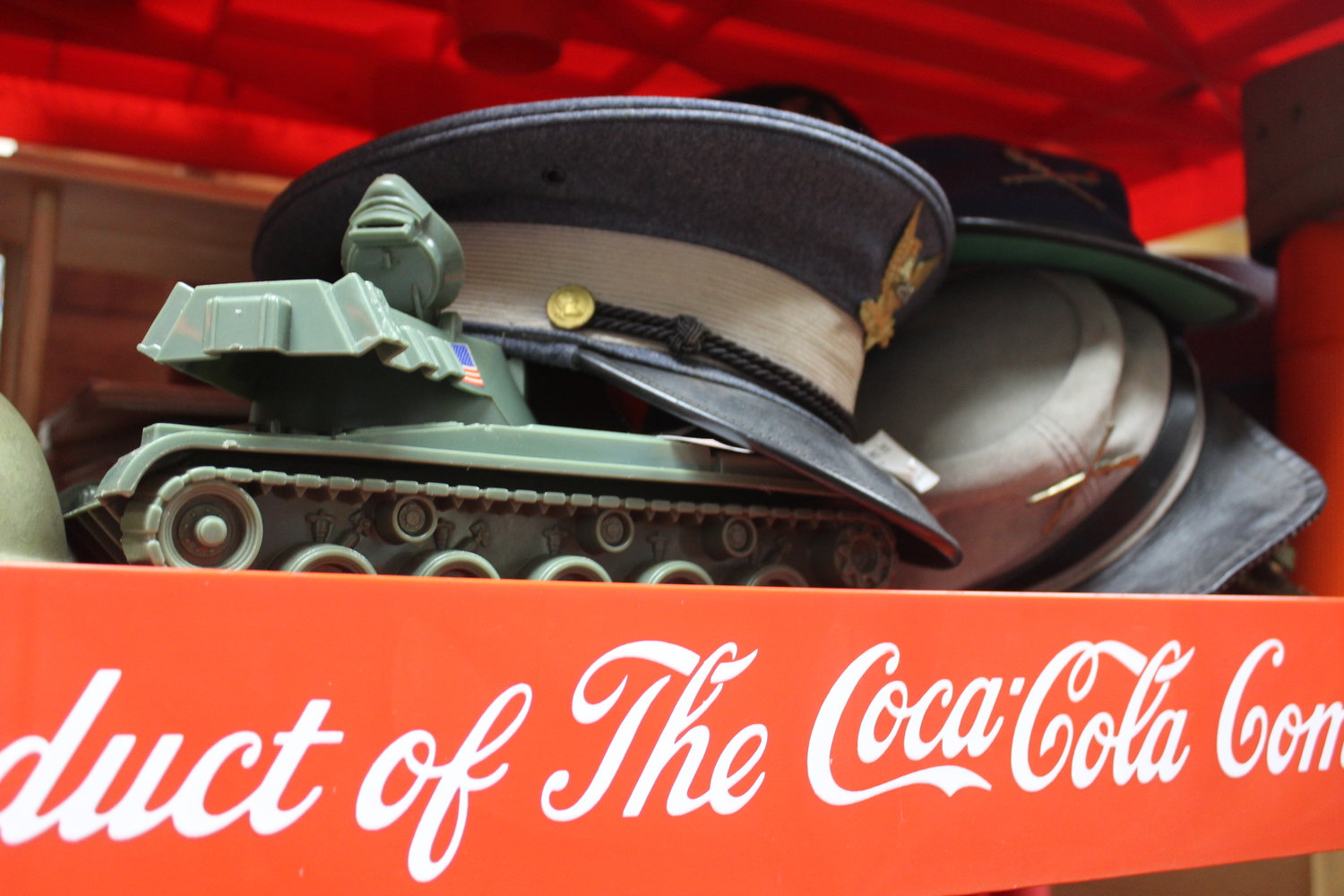 Keepsakes from the Korean and Vietnam wars sit on a 1950s-era Coca Cola shelf.
BRIAN STIEGLITZ/HERALD 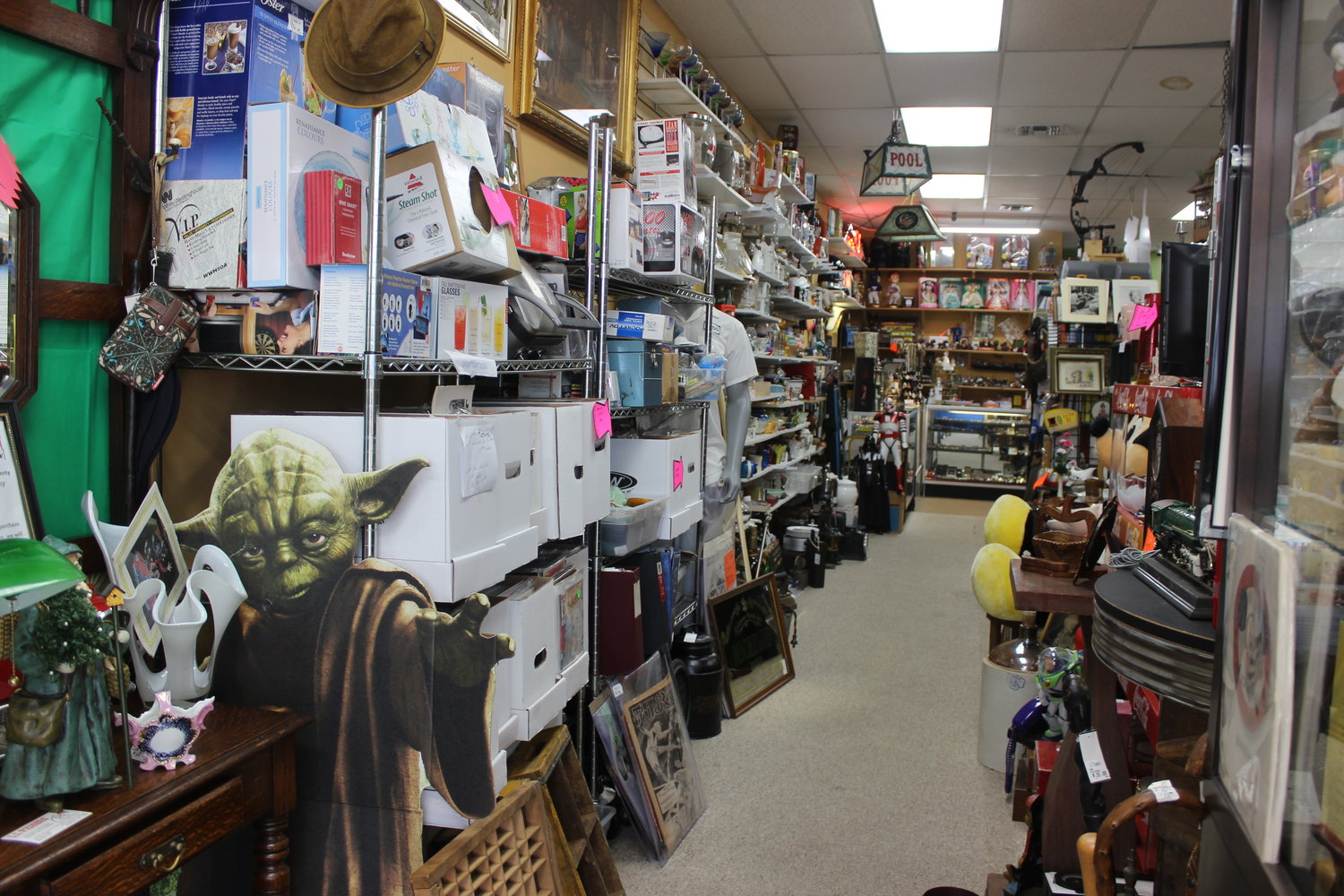 The shop has products ranging from household appliances to staples of pop culture.
BRIAN STIEGLITZ/HERALD 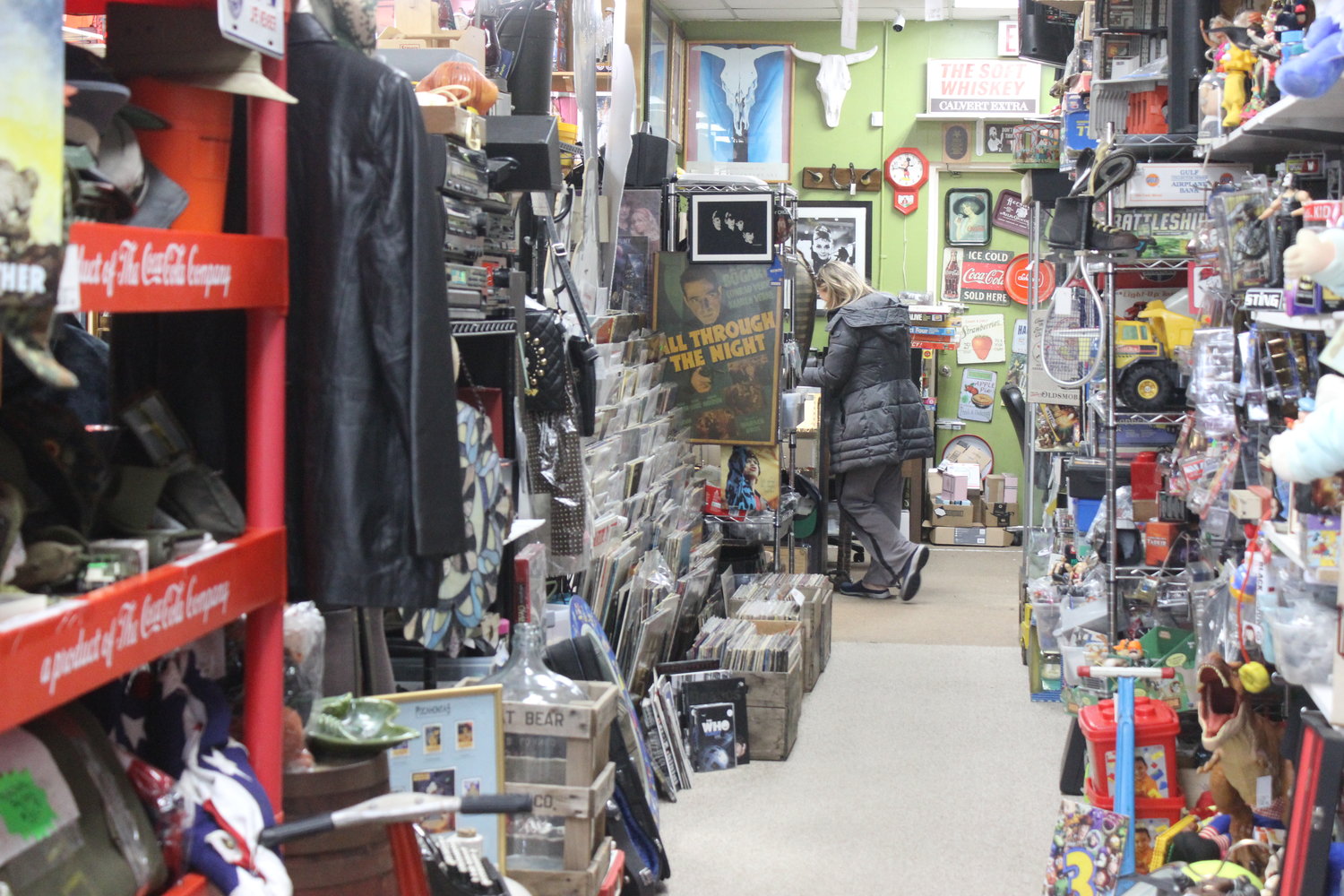 Guarnotta opened the shop in 2011, and his family now helps him run it.
BRIAN STIEGLITZ/HERALD
Previous Next
By Brian Stieglitz

L.I. Pickers is a time capsule of the last 70-plus years. Bomber jackets, cadet hats and medals from the Korean and Vietnam wars sit on a 1950s-era Coca Cola shelf. Across the aisle, a row of Mattel’s special-edition Holiday Barbie dolls from the 1990s stand in their cases.

Lava lamps, bubble gum machines, Humphrey Bogart movie posters, record players, porcelain dolls, model cars and other fixtures of decades past are all laid out in the cluttered harmony unique to thrift stores and antique shops.

Despite the toll the coronavirus pandemic has taken on many businesses, L.I. Pickers has seen a surprising spike in activity over the past nine months. “Since the pandemic, it’s busier than ever,” said its owner, Gary Guarnotta, adding that he expected to see more sellers of knickknacks and doodads because people have had more time to clean out their attics and basements.

“What I didn’t figure was how many people would want to buy,” Guarnotta noted. “People aren’t going on vacation, they aren’t spending money on things like concert tickets, so they’re treating themselves.”

Guarnotta, 58, of Levittown, opened the consignment shop in 2011 in a strip mall on Carman Avenue, in Salisbury. “That year I started going on the road and buying stuff,” he recalled. “But it wasn’t like American Pickers” — the History Channel reality show about two antique collectors who travel the country, looking for treasures.

The difference, Guarnotta said, was that “there’s so much history here on Long Island that I didn’t have to go far.”

He has been a collector of 1950s memorabilia since he was 17, and owns three Chevys and a Ford Fairlane, all models from that decade. He worked for a local furniture company from 1995 to 2008, when he lost his job in the Great Recession and began searching for a new career path. He wanted to open his own small business, while pursuing his hobby.

“I can’t bring any more stuff home or my wife will kill me,” he said with a laugh. “But I bring it here and I can look at it every day.”

Gary and his wife, Maureen, were sweethearts at East Meadow High School, where they graduated in 1980 and 1981, respectively. They met in Maureen’s freshman year because she liked his car — a yellow Dodge Dart — and wanted to meet him.

Maureen worked for a phone company called Reliable Voice and Data for 38 years, but when the pandemic hit, she left her job and began working at L.I. Pickers full-time to help her husband. The couple have a 30-year-old son, Gary Jr., who lives in Merrick with his wife and two daughters, a 2-year-old and a 1-month-old, and these days L.I. Pickers is a family operation.

“I know it wouldn’t be easy to get people to buy stuff,” Guarnotta said of initially opening the shop. “Everybody needs money and has junk they want to get rid of, so inventory wasn’t a problem.”

When he started the business, Guarnotta was offered a treasure trove of antiques and collector’s items that people were looking to sell. Now they research their finds on eBay, and sell them at a 20 percent discount because, Maureen said, “a quick nickel is better than a slow dime.”

Some of the prices surprise them, Maureen said, noting a portrait of a scantily clad Lauren Hutton, the actress and model, that is valued at almost $700.

L.I. Pickers also has two eBay shops — @g-dog777 and @lipickers-0 — and a YouTube channel on which employees display some of their products. With its online following, it draws customers and sellers from other states. After their chat with the Herald, the Guarnottas were expecting a Vermont comic book enthusiast who planned to spend hours in the store’s basement, browsing hundreds of comic books from throughout the 20th century.

Asked about their favorite finds over the years, Maureen laughed and said, “You should come to our house and see our garage.” Guarnotta narrowed it down to either a Coke machine or a jukebox, both from the 1950s.