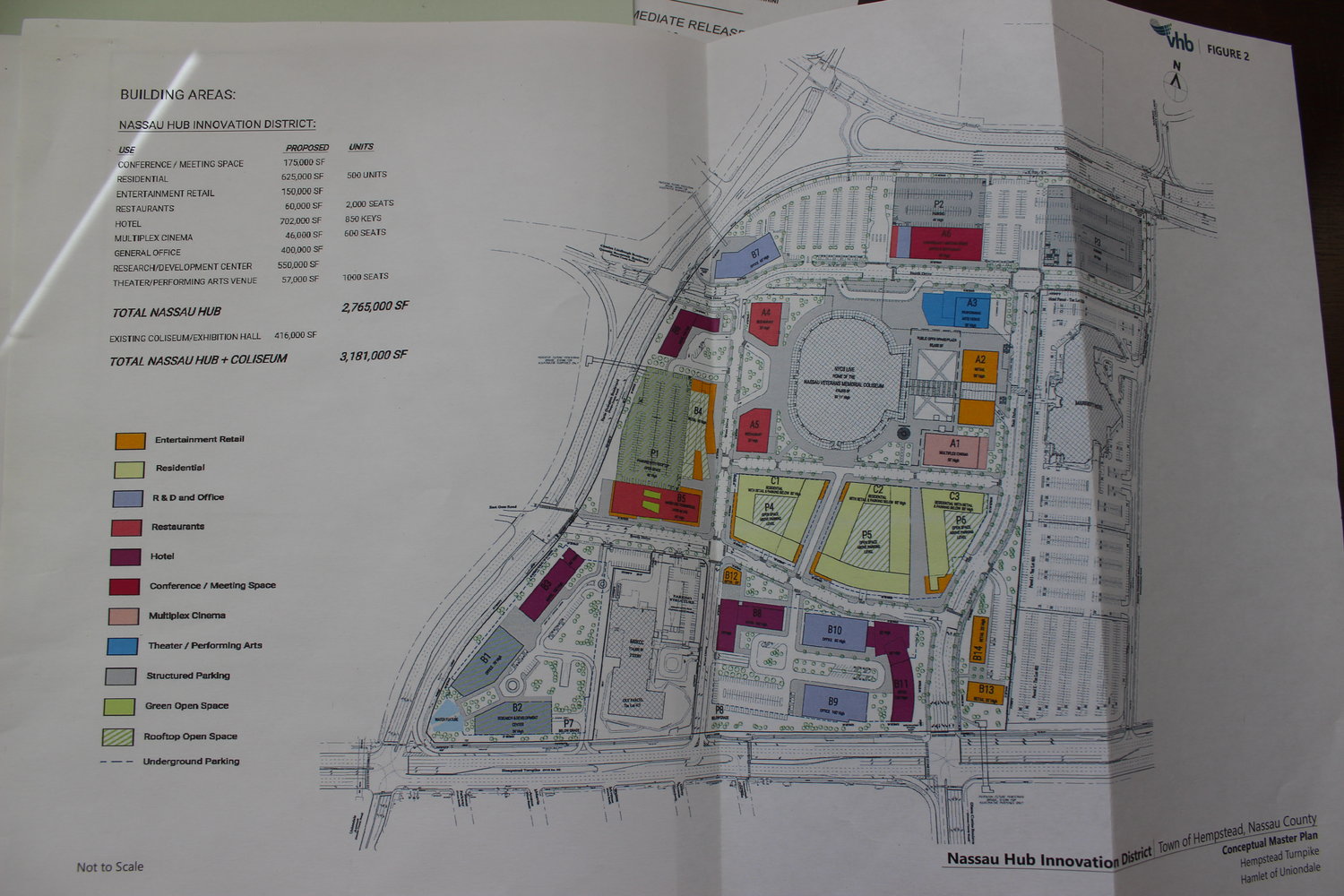 At left is the Nassau Hub Conceptual Master Plan, which developers Brooklyn Sports and Entertainment Global and RXR Realty drafted and dated Dec. 20, 2019. The Nassau County Legislature approved it, and now it sits in the Town of Hempstead clerk’s office, under review.
COURTESY TOWN OF HEMPSTEAD 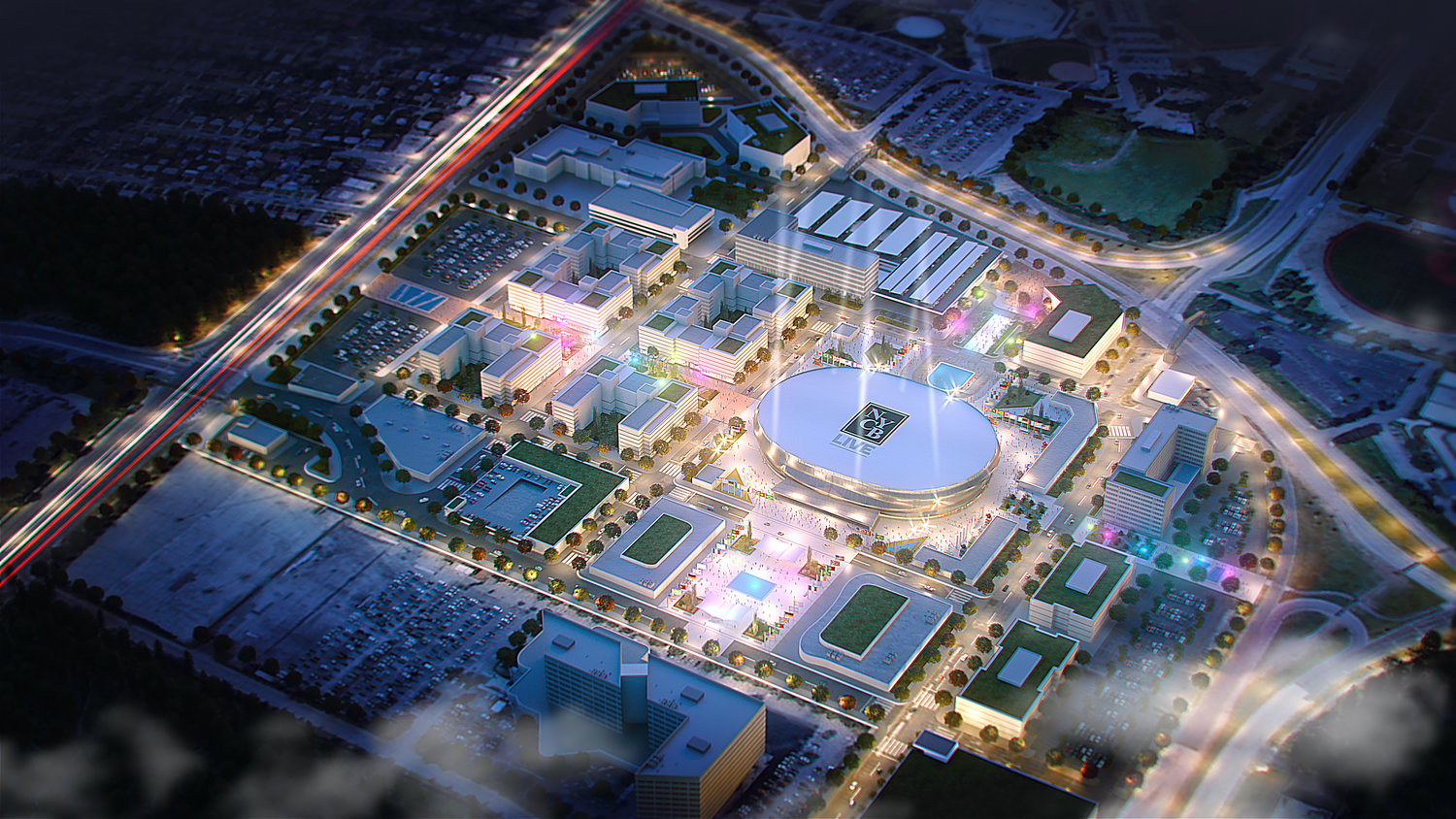 A rendering of what the completed Nassau Hub would look like.
COURTESY BROOKLYN SPORTS & ENTERTAINMENT AND RXR 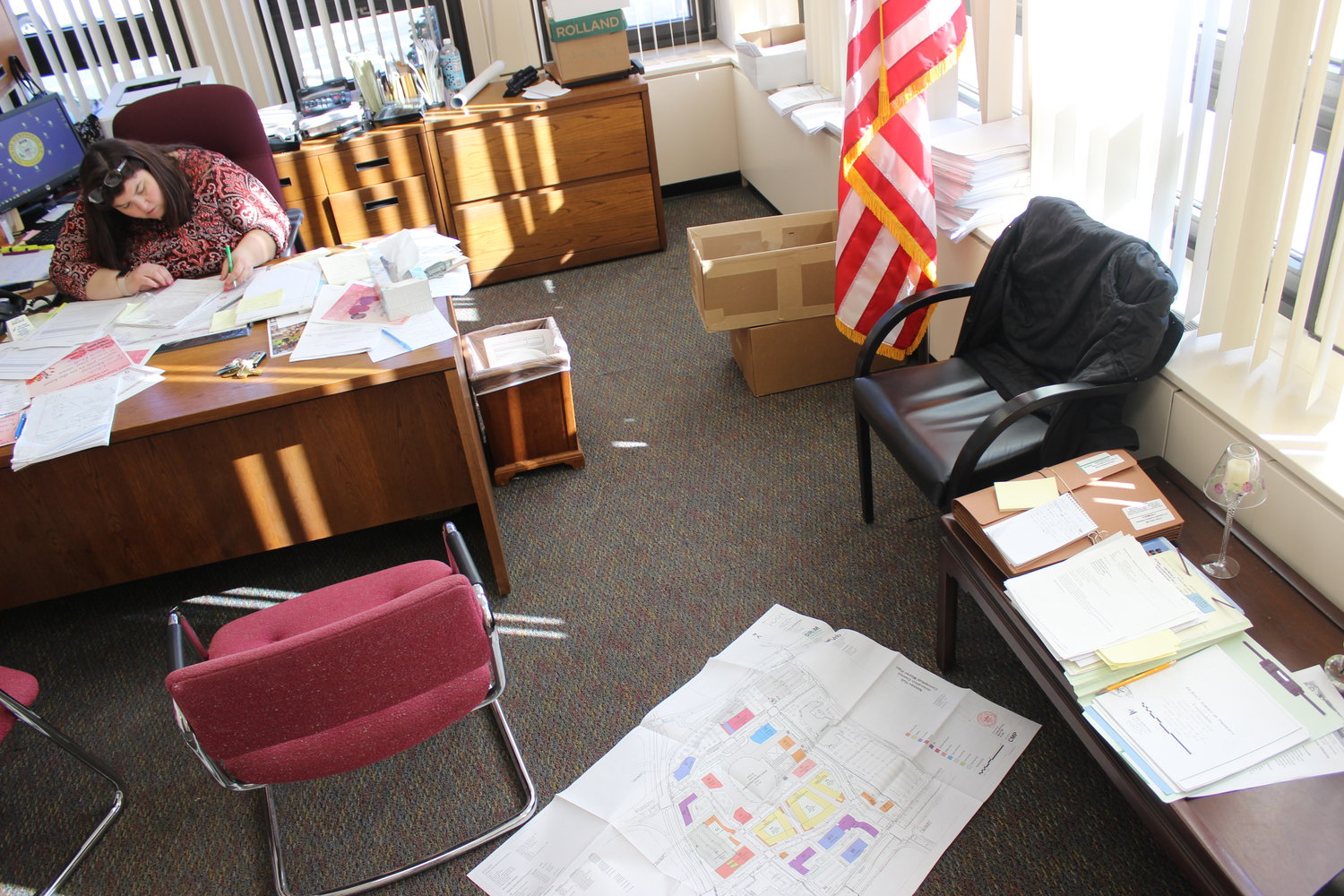 Construction on the Hub could begin if the Town of Hempstead approves the Conceptual Master Plan, an application to rezone its 72 acres and an environmental assessment form. The Herald recently viewed the documents with Deputy Town Clerk Susan Trenkle-Pokalsky.
BRIAN STIEGLITZ/HERALD
Previous Next
By Brian Stieglitz

The documents that need to be approved to start redevelopment of the 72 acres surrounding Nassau Coliseum, an area known as the Nassau Hub, now sit in the Town of Hempstead clerk’s office, under review.

They include an application for rezoning, an environmental assessment form and a number of blueprints of different sizes. Brooklyn Sports and Entertainment Global and RXR Realty hope to break ground on what they are calling the Hub Innovation District at this time next year.

The developers have been working with existing Town of Hempstead zoning and building codes to draft their vision for the Hub. The last time the town approved rezoning of the area was for a Conceptual Master Plan in 2015, which permitted the Nassau Events Center to renovate the Coliseum.

Maureen Hanlon, president of Brooklyn Sports and Entertainment Global, and Richard Conniff, a representative of RXR, signed an application, dated Dec. 20, 2019, to amend the master plan. Their stated goal is to create “an attractive physical environment with amenities and services for the use and enjoyment of working, resident and visiting populations.”

The 2020 Conceptual Master Plan includes the following features in the Hub:

Two parking garages with a total of 6,750 spaces, and an additional 6,000 spaces of off-site parking designated for Hub patrons.

County Executive Laura Curran approved and submitted the latest plan to the Town of Hempstead, which controls zoning in the Hub. If Supervisor Donald Clavin approves it, construction can begin.

Over the past decade, the Hub has been relegated to something of a political purgatory. In 2006, then New York Islanders owner Charles Wang wanted to build a mixed-used community, called the Lighthouse, that included housing, retail shops, a renovated Coliseum and a 60-story tower. The $3.75 billion project was expected to take a decade to build, generate $71 million in annual tax revenue and create 19,000 permanent jobs.

Nassau County, under then County Executive Tom Suozzi, appeared to be on board, but the Town of Hempstead, under GOP leadership, did not approve the project, and it stagnated.

Curran has been championing the Hub’s development since taking office two years ago, and early last month, touted its latest iteration to an audience of roughly 800 at a breakfast organized by the Long Island Association, a business group. “I want the Hub to be an actual hub,” she said. “It will draw visitors, but it will also be a neighborhood.”

After he took office last month, Clavin pledged to make the Hub a priority. “The Nassau Hub’s development is in a critical phase right now, and the outcome of this project will greatly impact Long Island for generations,” he said. “I’m eager to work with Nassau County, the developers and my fellow members on the Hempstead Town Board to ensure that this job is completed properly, efficiently and effectively.”

Curran approved a Development Plan Agreement and lease amendment in December 2018, granting BSE Global and RXR permission to draft the latest proposal. One of the conditions, however, was that the developers hold public meetings and take input from a Community Benefits Advisory Committee.

A committee was formed last March, and has been meeting with Curran, Clavin and the developers to draft a “community benefits agreement” that delineates the amenities and resources for the villages and hamlets surrounding the Hub — potentially including internship programs with local high schools, job-placement programs and business partnerships.

The Community Benefits Advisory Committee spawned sub-committees that the developers called “working groups,” each of which has a community-oriented focus. Joseph Parisi, of East Meadow, is a member of a sub-committee dedicated to environmental protection that includes roughly 10 local residents, and has met three times over the past year. “From my perspective, I’m very optimistic about everything,” Parisi said. “We made recommendations that are now included in their designs.”

Parisi referred specifically to the developers’ plans to add solar panels, a greenhouse and a miniature farm to the roof of one of the proposed parking garages. Rooftop farming company Brooklyn Grange has signed on as a program consultant, pledging to create a sustainable and productive environment atop the garage.

According to the developers’ plan, groundbreaking would take place in January 2021 and the project would be completed by December 2027. The construction would be separated into two phases, with a mid-phase break sometime in 2024.