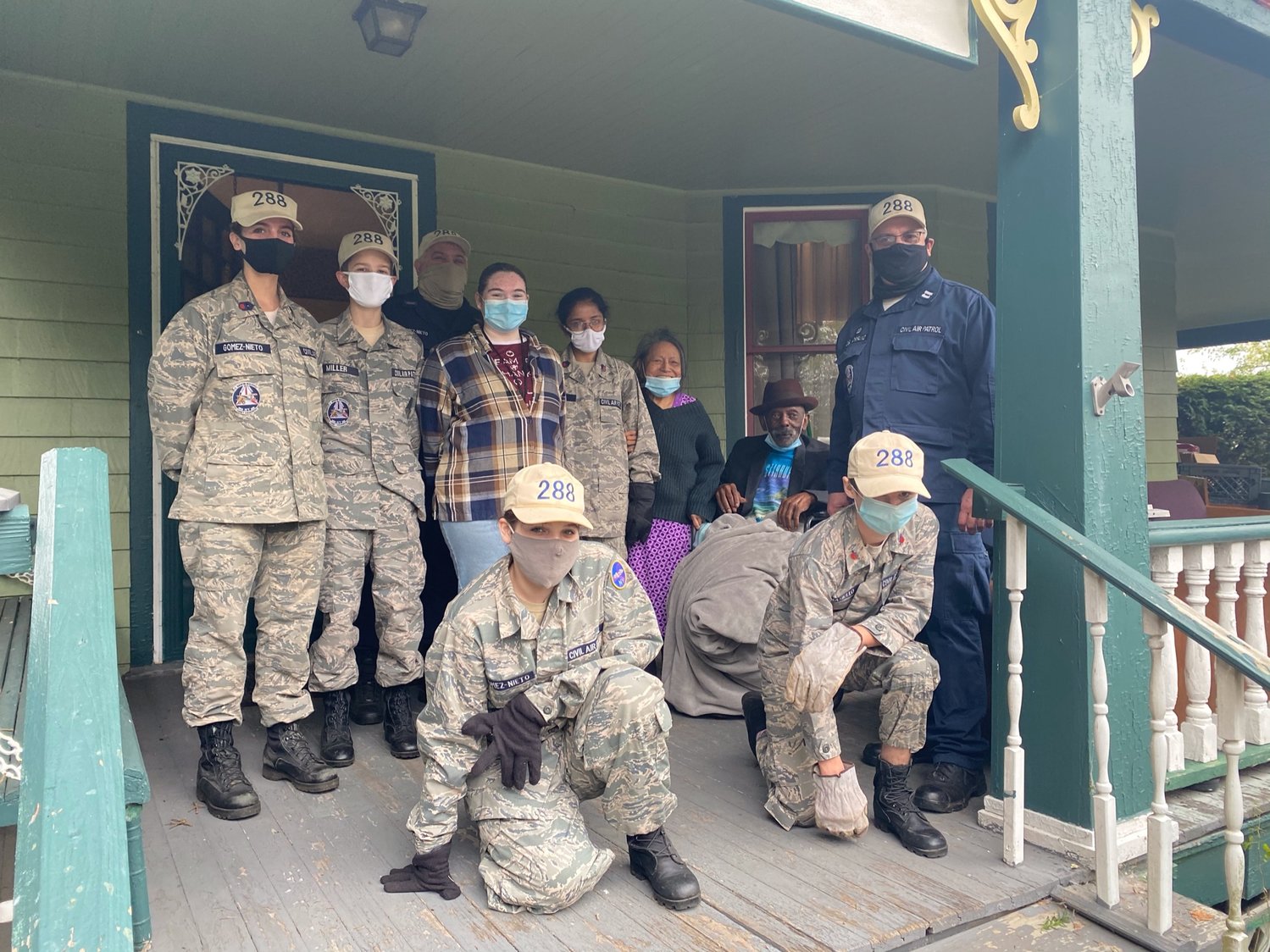 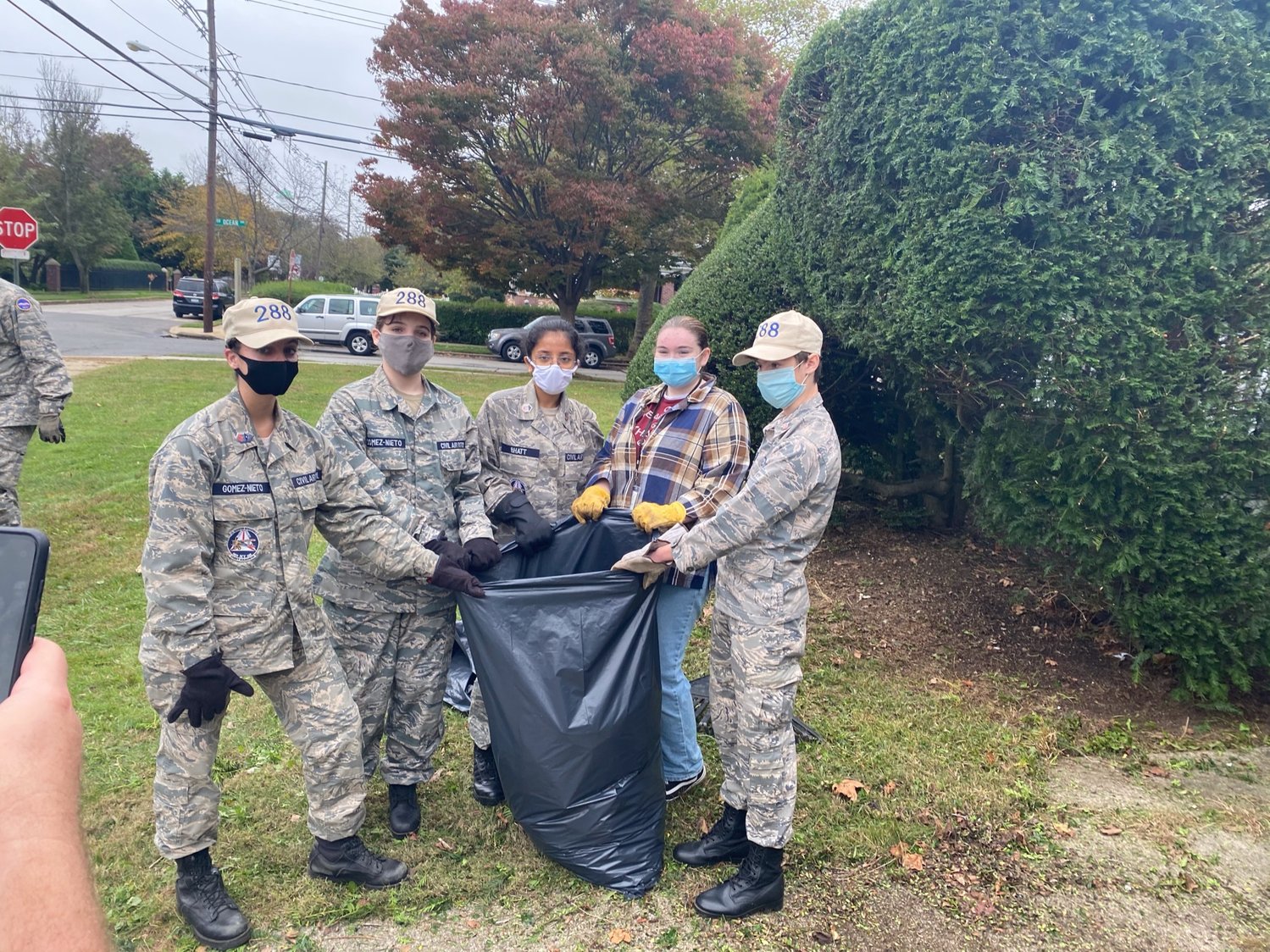 There were roughly 60 volunteers, many of them from the Cadet Program of the U.S. Civil Air Patrol and Freeport High School’s Junior Reserve’s Officer Training Corps.
COURTESY MARK DEL ORFANO
Previous Next
By Brian Stieglitz

The Rev. Eugene Purvis sat on the front porch of his Freeport home and told stories about his service in World War II to a group of high school students, most of whom hope to serve in the U.S. military.

One such story recounts the time Purvis was serving on the Pacific island of Saipan with the 20th Army Air Corps, when he was the sole survivor in his unit of an attack by Japanese bombers.

Purvis, 97, the former pastor of the Naomi Temple AME Zion Church in Roosevelt, has a mental scrapbook of similar experiences that shaped him. He shared it with the students, who were among roughly 60 volunteers from East Meadow and Freeport who visited him last Saturday to help clean his house and do some long-needed home improvements.

Purvis is an active member of Freeport Cares, a community group that works with the school district and village to promote programs and activities for Freeport families. As he aged, members of Freeport Cares took turns caring for him and his wife, Sylvia. When the coronavirus pandemic hit, they delivered meals to the Purvises’ home and discovered that it was in a state of disrepair.

One member of Freeport Cares, Christine Waters, taught at Barnum Woods Elementary School, in the East Meadow School District, for 25 years, until 2017. She is now co-president of the East Meadow Association for Retired Teachers.

Over the summer, Patrick Pizzo, the East Meadow School District’s assistant superintendent for business and finance, invited Waters to join a task force he was forming called the Economic Opportunity for All Youth Committee. One of its missions is to help young people find employment, mentorship and apprenticeship opportunities. Waters connected the committee with Purvis, and Pizzo quickly began looking for ways to help the pastor and his wife.

In August, Pizzo told the Promise of Hope Foundation, a Copiague nonprofit that offers families in need financial and emotional support, about Purvis. They installed a handicapped-accessible bathroom on the first floor of the Purvises’ home and fixed some plumbing problems.

Then, about three weeks ago, Pizzo wanted to organize an event for students to help clean the home, pave its driveway and do other renovations. He reached out to Jeff Rosenking, a former member of the East Meadow Board of Education who is also a search-and-rescue pilot for the U.S. Civil Air Patrol.

“We ended up having an unbelievable response,” Pizzo said. “I thought we’d end up having at most 20 kids, and it was so much bigger. We got so much work done, it was overwhelming.”

The 60 volunteers, from both groups, were three times as many as Pizzo had hoped for. Because of limited space, some of the students did military drills in the street while others were helping clean.

“I’ve never seen such a diverse mix of people working together toward a common goal,” said Doug Green, of Freeport Cares, who has been taking care of the Purvises during the pandemic along with fellow members Bill Tetreault, Rod Wilson and Waters.

Wilson also volunteered last Saturday, and said he was amazed by the response. “Many of these students will aspire to become the future pillars of a new, diverse society, which will be more just and fair for all,” Wilson noted. “You can just tell.”

Purvis chatted with the volunteers when they weren’t working. “It’s really important for these kids to get to talk to people like him,” said Del Orfano. “They’re aren’t many World War II veterans alive today.”

Purvis enlisted in the military shortly before his 20th birthday, and joined the 435th Aviation Squadron, a unit of African-American soldiers in the 20th Army Air Corps.

Although Purvis and his fellow soldiers faced discrimination, he said he never had any hatred for anyone. It was his faith in God, love for others and commitment to following the rules, he said, that led him to live a long and happy life despite the hardships he faced.

“I never got angry at anybody,” he said. “When you live long enough, you find the truths in life . . . and I do feel sorry for those who hate others.”

Purvis moved to New York in 1946, after the war, and a few years later he and Sylvia settled in Freeport. The two have spent their lives serving others, through their involvement in Freeport Cares and launching the Children’s World Montessori School, a local private school for students in pre-K through third grade.

Promise of Hope, which is raising funds to hire a health care aid for the Purvises, set up a GoFundMe page that has raised $7,065 of its $50,000 goal. To contribute, go to https://bit.ly/3jBgnAl.