Salisbury raises over $8,000 for a variety of causes through Bingo games 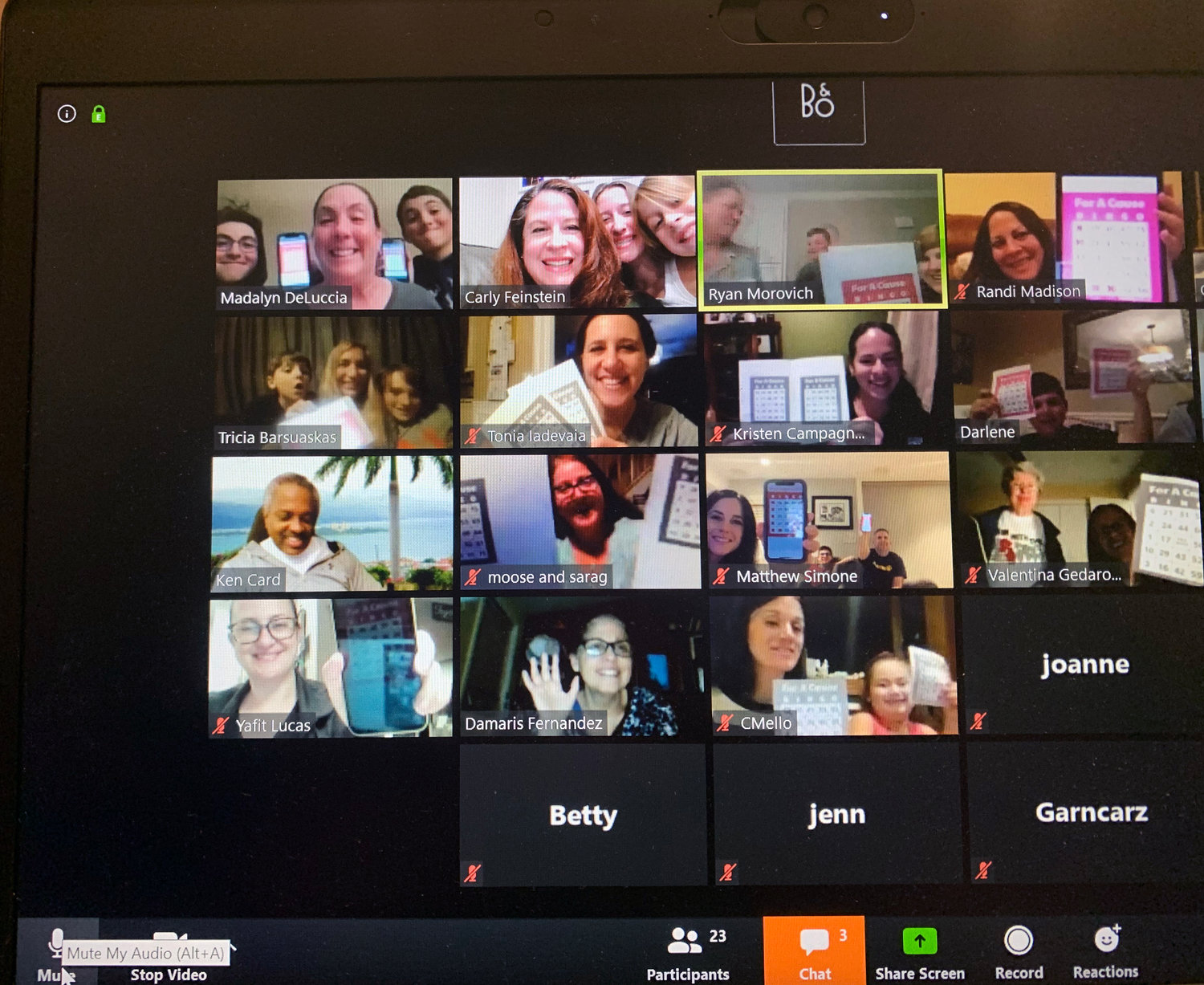 A group of Salisbury mothers have been organizing virtual Bingo games to raise funds for different causes impacted by the coronavirus pandemic. Last Sunday, their third game raised over $3,000 for the National Alliance on Mental Illness in honor of Mental Health Awareness month.
COURTESY CARLY FEINSTEIN
By Brian Stieglitz

Some families in Salisbury are battling pandemic isolation by raising money for charity. On Mother’s Day they spent their third Sunday playing a community-wide game of Bingo on Zoom. This week the caller was a special guest: Kenneth Card Jr., superintendent of the East Meadow School District.

A group of Salisbury mothers have organized the virtual games as a way to celebrate despite the spread of Covid-19, raising funds for a different cause each week.

“You can’t go to the movies anymore. You can’t play mini-golf,” said Diana Hicks, one of the organizers. “To have an hour of entertainment is priceless.” The other mothers include Lulette Infante, Madalyn DeLuccia, Carly Feinstein, Kristen Campagnuolo and Tricia Barsuakas.

Infante and her neighbors garnered support on the Salisbury/Westbury Moms and Dads group on Facebook. “Whenever somebody needs something, they could post it there,” said Campagnuolo, who is one of the group’s moderators.

The Bingo costs $10 per game, and the prizes are gift cards that are either purchased or donated by local businesses. Last week’s grand prize was a $200 gift card for the Westbury Academy of Dance.

“The businesses have been so grateful because they’re really hurting right now,” Feinstein said.

“But it’s not just about raising money,” said DeLuccia. “It’s about giving families something to do to get away from everything and just have some fun.”

In addition to Card, East Meadow principals and teachers have also taken part in the games with their students. The first game, on April 26, raised $2,100 for Salisbury’s Caper’s Deli and Catering, which has been accepting donations to send meals to health care workers throughout the East Meadow and Salisbury communities.

The game on May 3 raised roughly $3,000, donating $500 of the total to the Levittown Food Pantry and $2,500 to Island Harvest Food Bank, where East Meadow resident Randi Shubin-Dresner is the president and chief executive officer. Last Sunday’s game raised another $3,000 for the National Alliance on Mental Illness, in honor of Mental Health Awareness month.

“We’re trying to touch on all areas hit by this pandemic,” DeLuccia said.

The inspiration for the Bingo games was another fundraiser that the mothers organized with Caper’s Deli and Catering in Salisbury. Infante is an ambulatory nurse specialist at Cohen Children’s Medical Center in New Hyde Park, but travels to a number of Northwell Health ambulatory care sites. Many have been converted to Covid-19 testing sites over the past two months.

Infante wanted to make sure that her colleagues at the testing sites felt some appreciation so she and her neighbors reached out to Caper’s, which has supported community fundraisers and events in the past. The staff has since delivered meals to workers at six testing sites.

“It’s an absolute honor to be a part of this,” said Tom Frantellizzi, of Franklin Square, who co-owns Caper’s with Fillipo Neri, of New Hyde Park. The two friends grew up working in delis before opening Caper’s together 12 years ago.

Caper’s also set up a GoFundMe page, which has raised over $3,400. The deli continues donating meals on an almost daily basis, and welcomes suggestions on where to send them. On May 8, Frantellizzi and Neri were putting together a donation to send meals to the staff at the Salisbury pharmacy Carman Drugs.

Infante attributed the success of Bingo to the generosity of businesses like Caper’s and the residents of Salisbury. “When I have a fundraiser or project I need help with, I know I’m going to get it,” she said.

DeLuccia agreed, adding, “For a small community, we do big things.”

Next week, the group plans to hold a possibly final Bingo game, depending on player interest, and is still contemplating where to send the money raised.